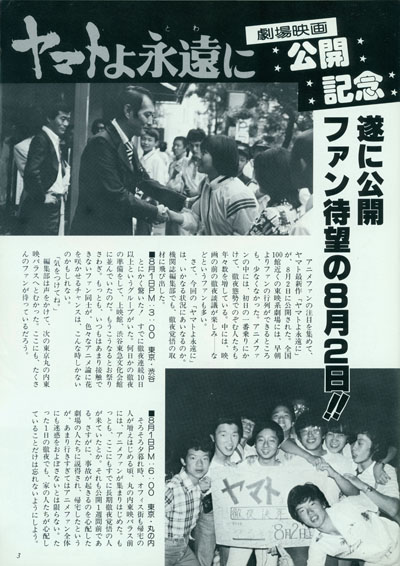 The Fan-Awaited August 2 Opening at Last!

The latest Yamato, Be Forever Yamato, premiered on August 2, drawing the attention of anime fans.

Fans lined up at close to 100 Toei theaters nationwide from the early morning. Anime fans rush in on the first day, and the number of people who wait overnight increases every year. Fans look forward to the all-night discussions as much as the movie itself. What was the situation like this time for Be Forever Yamato? The newsletter editorial staff jumped out to cover the all-night vigil.

We were surprised! There was a group who had been waiting overnight for 10 days already. Their multiple-day preparation took place at the Shibuya Tokyo Cultural Center.

There was already a festival atmosphere. For the fans who seldom come into contact with other fans, it was a chance to make flowers bloom by discussing their various theories.

Having spoken to them, the editorial department went next to Tokyo Marunouchi Toei Palace. Many fans were probably waiting there, too.

As an increasing number of people started home from the office at dusk, anime fans began to gather in front of the Marunouchi Toei Palace. People who were prepared for all-night vigils were already here too, one week before the premiere.

As expected, some were asked to go home by people from the theater who were worried about accidents. Excessive activity may cause a great deal of trouble for all anime fans. Even for one all-nighter, don’t forget your families are worrying about you. 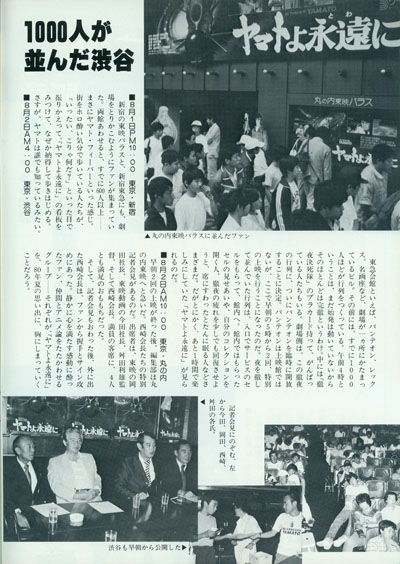 1000 People Formed a Line in Shibuya

Fans gathered to surround the Toei Palace and Tokyu theaters in Shinjuku. Both halls together already had more than 600 people–it felt just like Yamato Fever.

People walked the streets in a drunken mood. “What the hell is this?” They looked around, and when they found the signboard for Be Forever Yamato, they became convinced and wandered off. Truly, everybody knows Yamato.

Tokyu-Kaikan is a building that contains several theaters such as the Pantheon, Rex, and Meiga-za. 1,000 people have already lined up here.

It’s 4:00 am, and no public transportation is working at this time. This means most of them have been in line all night. Someone made a sign saying, “All-Night Death-Defying Squad” and people there are doing their best.

At last, those on the theater side decide to open the Pantheon temporarily for these all-nighters. The Pantheon is not the actual venue, but two special screenings will begin here at 5:00 am. Everyone who stayed in line all night gets a free animation cel when they go inside.

Some go to sleep as soon as they sit down. Others are instantly revived when they show their cels to each other and share their personal collections. And now they look forward to Be Forever Yamato, which will begin in one hour.

After the first two screenings ended, the editorial department hurried to the Toei Marunouchi theater. There was a special press conference with our chairman, Yoshinobu Nishizaki.

Also in attendance were Toei President Okada, Toei Animation President Imada, and Director Toshio Masuda. The packed audience was very pleased to see all four of them.

After the press conference, Mr. Nishizaki went out to greet the fans for a handshake and autograph attack. The fans were intoxicated by the deep impression that filled their hearts. Making new friends, debates with other fans, and seeing Be Forever Yamato will become heartfelt memories from the summer of 1980.