The world of garage kits is an eclectic one, almost inaccessible to modelers outside Japan, but still a wonder even from afar. Since it’s mostly fan-driven, it can be a wish list of everything that never got made by a big commercial company like Bandai. Click here to enter the ever-expanding world of Yamato garage kits. To see how they’ve filled in the ranks of the Gamilas space navy, keep reading…

Bandai’s B-Club was a long-running hobby magazine for hardcore fans, and in 2005 it lent its name to a line of 40 Yamato models made of polystone, some of which came pre-assembled. The Gamilon kits included Dessler’s Series 1 battleship…

…and probably the definitive version of the Destroyer. At 1/350 scale, it was also the largest. Another garage kit maker named Ndopara Shop did their own version in a smaller size (above right). 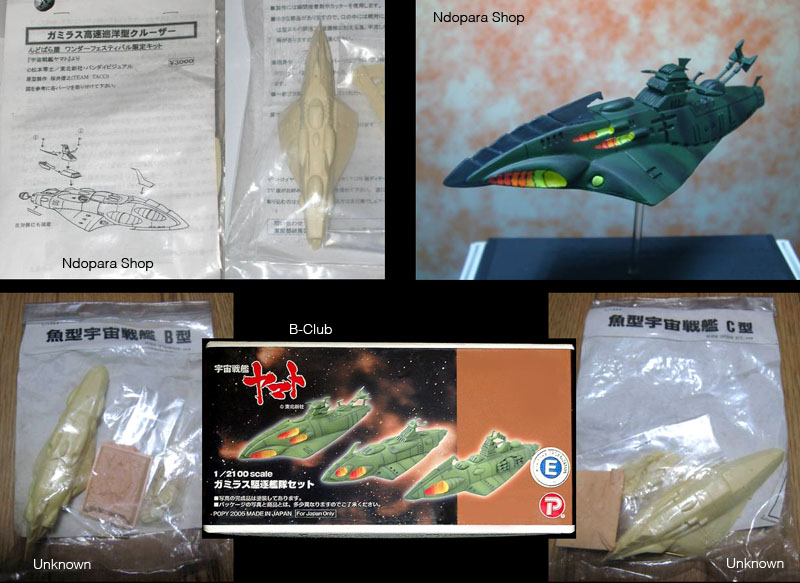 The Domelus III was used briefly in the series by General Domel [Lysis] in his first battle against Yamato. Bandai never made a model kit of it, so three different garage kit makers came to the rescue.

The Domelus II is easier to remember, since it served as Domel’s command ship in the battle of the Rainbow Star Cluster. No less than five separate garage kits are known to exist. 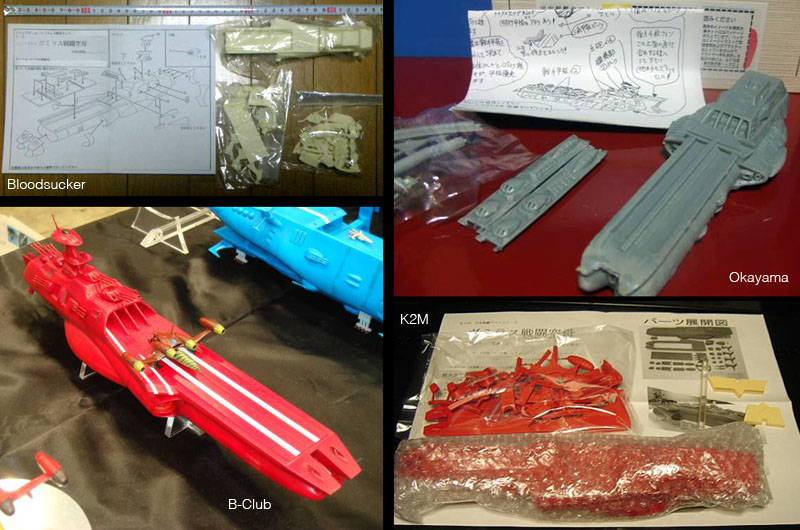 As seen earlier, Bandai made three kits for the red Battle Carrier, but that wasn’t enough, as evidenced by four more shown here. B-Club’s version came with a Drill Missile Bomber.

The Tri-Deck Carrier was another popular choice; here are three of them to prove the point.

With all these ships made, B-Club pulled a hat trick and released the entire Domel task force in a single set. 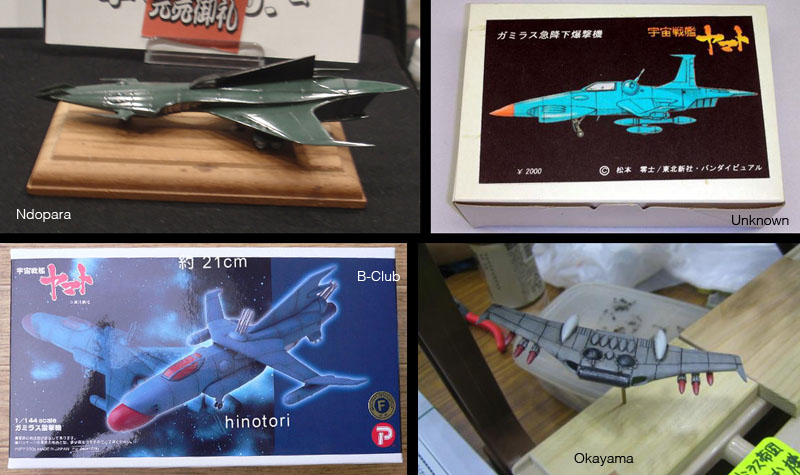 The various fighters were another natural choice for garage kit makers, since there were no mass-market models for any of them. Clockwise from upper left, here’s the standard fighter, Dive Bomber, Planetary Attack Craft, and Torpedo Plane, each from a different company.

Here again, B-Club put another set together to fill out the ranks.

Since it was only seen at the beginning of Series 1, it’s easy to forget the Fast-Attack Carrier that became Yamato‘s first opponent. But two garage kit makers didn’t forget.

Yamato‘s major enemy in the solar system was Shulz, commander of the Pluto base, known as Ganz in Star Blazers. His flagship should have been an obvious choice for an early model kit, but one was never made. But these three garage kits came to the rescue. 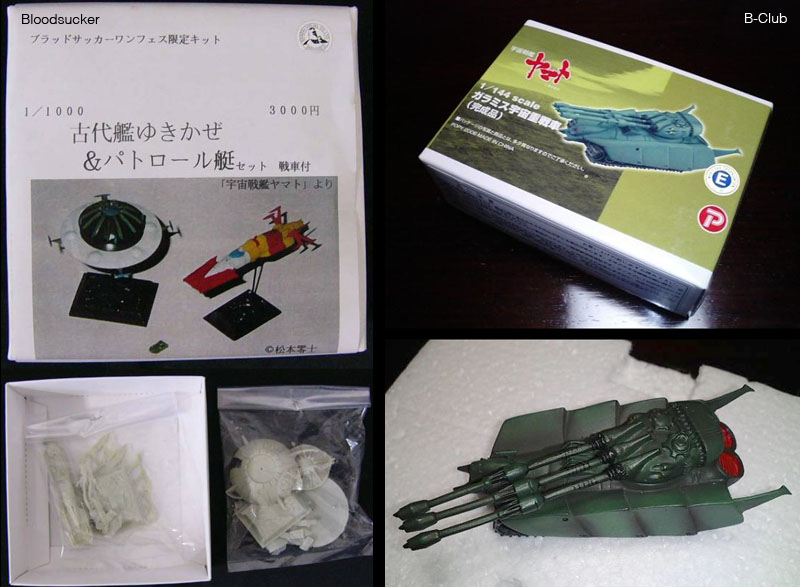 Here are a couple more that had only brief appearances, both in the Titan episode: a Planetary Patrol Ship and the ground tank it carried. The first was part of a “Titan pack” made by a company named Bloodsucker that included a Yukikaze model and a tiny little ground tank. The larger tank came preassembled and prepainted from B-Club.

Can’t leave out the missiles! Ndopara shop made an “Ultra-Menace Missile” in miniature size, and a company named H.M.M. came out with a Drill Missile Bomber. 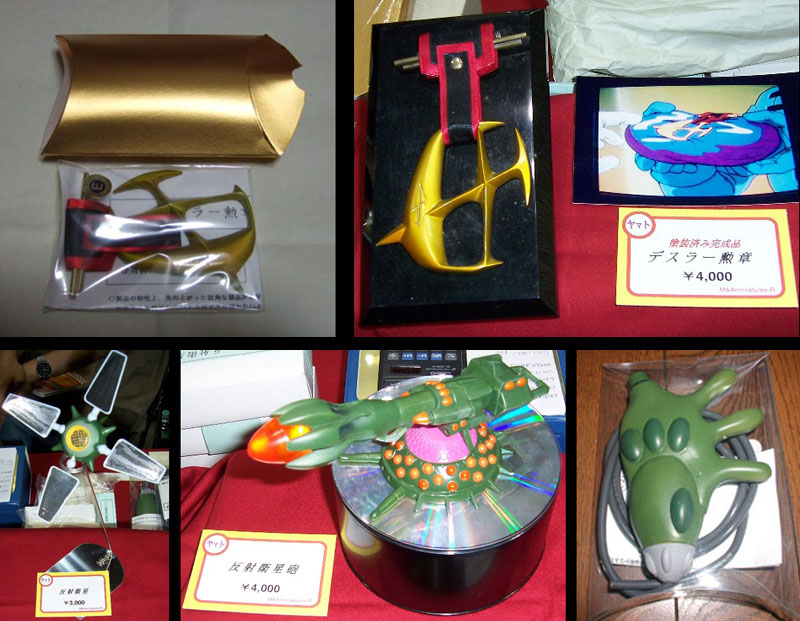 M&A Miniatures specializes in unusual Gamilas models. Shown here are a medal of honor, Reflex Gun, and Reflex Gun trigger. Their other kits include a worker robot, Desslok space mine, and Communications satellite. They also make a Yamato in the seabed, another covered in asteroids and still another with an asteroid ring. And for good measure, they also throw in a Cosmo DNA. (Unfortunately, photos of most of these are elusive.)

Last but not least, another Gamilas specialty company with the chummy name of “Love Takos” (Tako is Japanese for octopus). Their interest is firmly rooted in the eclectica of Series 1 as evidenced by this Floating Continent, Gamilas Goblet, and Ultra-Menace Missile.

As we’ve learned over the years, the deeper you look into the Space Battleship Yamato phenomenon, the more it seems to offer. It’s deep and wide enough to satisfy just about every craving, and will continue to do so for a long time to come. As more is added to the Gamilon Gift Shop, this account will continue to grow right along with it.