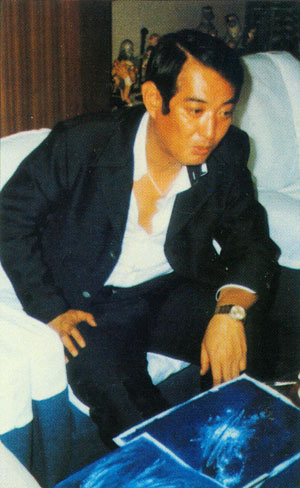 By Yoshinobu Nishizaki
From the Be Forever Yamato Deluxe Book, November 1980 (Academy)

The Overwhelming Voice for Yamato‘s Continuation: the History from Farewell to Be Forever

To talk about this work, it is first necessary to talk about earlier ones. This is about how Be Forever Yamato came to be produced despite the statement that Farewell to Yamato was the concluding story.

Farewell represents my own life philosophy. The depiction of life was based on the Oriental or Buddhist thought that life does not vanish with the death of the body. However, though it gained the passionate support of fans, criticisms came to my attention, such as “the death of the characters was a tool of the story,” or “it over-glorified war and violence.” Also, it is a well-known fact that Mr. Leiji Matsumoto was opposed to my decision for Kodai and Yuki to die, and insisted that they should survive the ending.

Certainly when I look back now, the death of the characters is loudly criticized but the overall impression of Yamato is “an image of a bright future full of hope” despite its undeniable dark side. But for me, regardless of such criticism, Farewell to Yamato was made to match the feeling of its title, and there was no falsehood in those words. In fact, it was clearly written in the final caption of the movie: “Yamato does not return.”

In any case, the first movie was an edited version of the original TV series, and it took three years for me as a producer to get to Farewell. It was a demanding time and I wanted to meet the expectations of the fans, so I had reached a point of emotional fatigue from the pressure to accomplish this goal.

Incidentally, because most of the story plot had already been exhaustively established in pre-production for the movie, I entrusted Leiji Matsumoto to lead the army on Yamato 2 (which we referred to at the time as the TV serial of Farewell) and personally decided to make the transition to the next project.

Once the TV broadcast started, the ratings were good and it was proved that Yamato‘s popularity had not yet declined. Moreover, fans across the country submitted a “life-saving appeal” to me for Kodai, Yuki, and Yamato itself. Though the original idea was for the TV version to end the same way as the movie, the voices that wanted Yamato to continue intensified as the series approached its end.

Finally, daring myself to accept criticism from both inside and outside, I decided to change the ending after consultation with Leiji Matsumoto. Whereas in the movie version Earth was saved by the self-sacrifice of Kodai and Yuki, it was Teresa who saved humanity in the TV version. In other words, the concept was changed so that Yamato could live on but must shoulder the humiliation of defeat.

To reach the ending with the idea of the movie version and then make it totally different for the TV version seemed shameful to me as an author. However, rather than belonging to me at this point, Yamato already belonged to the fans, so I judged that it would be unacceptable for it to end at the whim of satisfying one person’s honor. 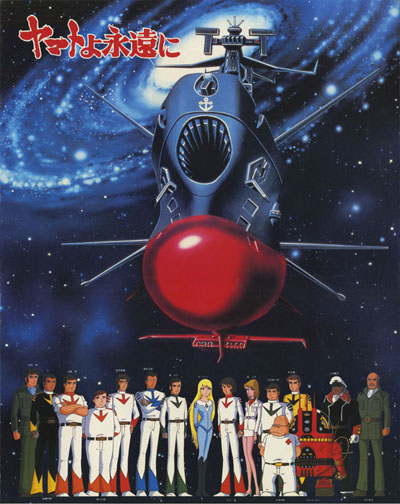 The Telefeature that became a “New Voyage” for me

Incidentally, I think some have noticed that the telefeature that aired after Yamato 2 is the only one in which my name appears in the credits as a director. This was partly the result of my attachment to the work.

At that time, I again asked Toshio Masuda of the Yamato main staff to direct it, but he was in the middle of shooting Hill 203 [Editor’s note: a live-action war movie] and Leiji Matsumoto was devoted to Galaxy Express 999. Therefore, I came to double as both the producer and director of The New Voyage.

In thinking about the history of Yamato, I strongly felt that the series had become the origin of emotional conflict between Kodai and Dessler. Certainly, Dessler had been presented as the incarnation of evil in the first TV series. However, with each repeated encounter with Kodai, I felt he should awaken to the existence of “love.”

Compared to the great enemy lurking in the universe, Dessler had transformed into someone sympathetic to Yamato even though he had a villain’s role, and so I decided to present him as an appealing character in The New Voyage. In fact, though Dessler was set to become the big star of the telefeature, he faced the misfortune of seeing his mother planet Gamilas destroyed by the Dark Nebula Empire and his future became uncertain. In strongly establishing the character of Dessler, it became different in my mind from the growth drama of Yamato.

Since there was the expectation that a new Yamato story would be born with this telefeature, I was convinced that it would be possible to add a new dimension. Therefore, after clarifying Dessler’s position I decided to throw in a new enemy threat so Yamato would have three sides going simultaneously.

Be Forever Yamato is the third theatrical work. In that way, the telefeature became the most memorable, monumental work for me and I strongly feel that, like the title, it became a “new voyage.”

Although Yamato is a work of entertainment, when looking back you can see a consistent theme with an underlying idea. Speaking frankly, it was only possible for it to become a series because a theme has been thoroughly pursued.

Therefore, in the past I approved most of the story proposals and compositions. Of course, I had the cooperation of gentlemen such as Matsumoto, Masuda, Yamamoto and Fujikawa, but the outline itself was in my own hands. Then it was through repeated staff meetings that the premise evolved to a fleshed-out form.

However, with this work, it began in the first round of talks with Leiji Matsumoto, and he himself wanted to write the first draft proposal, which would be in the form of a joint production. [Read it here.] Once that draft was submitted, I added the Yamato spirit and began a joint rewrite with Toshio Masuda. [Read it here.] 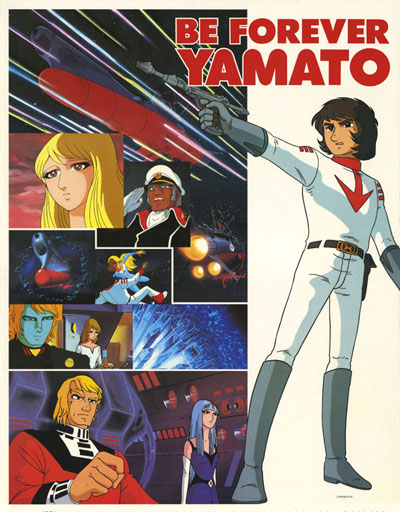 The Difficulty of Creating the Story

Leiji Matsumoto’s draft proposal was set on Earth 200 years ahead, so the story started from the bold SF setting of a fight 200 years in the future of Earth. However, as seen in the film, the future Earth is a “deception” by the Dark Nebula Empire to defeat Yamato, and the work of constructing a story with respect to that tricky point was back-breaking.

For example, because the 200-year future Earth appears about two-thirds of the way into the story, the drama escalates toward the last scene, and I felt that for everything to converge in that structure was unreasonable. Of course, my own lack of technical skill meant that some aspects of Mr. Matsumoto’s concept could not be fully utilized, which I still regret after the film’s release.

Although I believe I successfully maintained the fundamental attitude of Yamato in this work, to specifically talk about “love,” this time I made an appeal for the beauty and importance of trust. I didn’t show it directly in visual images, but I proudly believe it didn’t end up as an empty, idealistic concept.

By the way, judging from the standpoint of visual representation in comparison with earlier Yamato works, there is a great improvement in character. As I consider the SF anime of recent years, there seems to be an interest only in mecha and SF concepts. However, in terms of exploring human expressions and psychology, I would not say anime plays an original role.

In this work, we frequently used closeup shots for the characters because I placed importance on reality in the making of the drama. Also, in terms of imagery, it was intended to be more elaborate than any previous Yamato.

For example, the double galaxy. It was an original concept by Mr. Matsumoto. A place where one passes through a black hole and reappears has never been seen before. It was a so-called world of “ethereal brightness” that caused the art staff to just cry. It gave them considerable trouble. But after a great struggle by the hardworking staff under Chief Director Tomoharu Katsumata and art director Kazuhiko Udagawa, a wonderful fantasy scene was born. The “ethereal world” became “a clear picture.”

Ambitious ideas were attempted throughout, such as the scene of the false Earth collapsing in the latter half of the story. By transforming the beautiful face of a young woman into an ugly one, it becomes an allegory of a human life as the life of a planet. 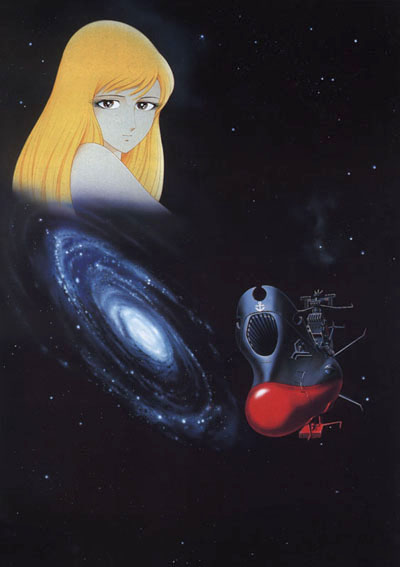 Speaking of new attempts, “scanimation” made use of the latest video technology, and through the Warp Dimension method, the screen itself changes from Vistavision size to Cinemascope in the latter half; it is characteristic of this work.

We were planning on the introduction of the former from the development stage. I received advice from specialists and we undertook repeated tests at the Far East video center, the only one with the technology in Japan.

At this stage, I understood that it would not integrate 100% with the animation. Eventually, it was only used in the scene passing through the tunnel of the Dark Nebula into the white galaxy. However, even if there are various technical problems, I intend to look for another opportunity to use scanimation and take up the challenge again.

Also, the idea of Warp Dimension came from the desire to change format and produce a big screen 70mm Yamato. To tell the truth, I intended from the beginning to make this movie in 70mm. This was not possible for various reasons, but there was still a feeling that Yamato should be on as wide a screen as possible with stereophonic sound, so we decided on Cinemascope.

It happened to be convenient for the passage through the world of the double galaxy, since it lead into one unexplored by humanity. If the screen suddenly opened up at the moment of passage and simultaneously changed to stereo sound, I thought it would be more effective.

However, due to the limitations of theater equipment, the Warp Dimension method was unable to be fully realized among all 160 theaters across the nation. Regrettably, it could only be seen in 45 specialty theaters in nine major cities such as Tokyo and Osaka. 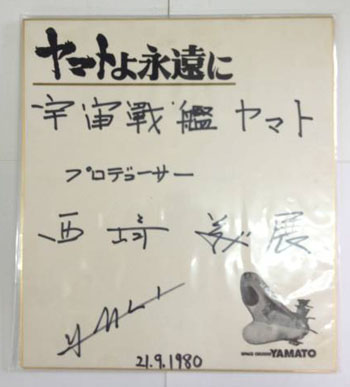 Because Yamato is horizontally long and jumps off a big screen when in flight, it inspired the simple thought that the width of outer space could also be well-expressed. But what I learned from these experiments was that if a drama is boldly composed with fully-integrated sound effects, it doesn’t have to be in 70mm. Nevertheless, my burning vendetta to see Yamato–a huge chunk of metal close to 300 meters long–on a big 70mm screen with a real sense of weight flying through an infinite universe, comes from my desire as a fan.

This time a scale-up was accomplished by going from Vistavision to Cinemascope, and in the next project I want to get Yamato into long-cherished 70mm by all means. And for Kodai and Yuki, the heroes of Space Battleship Yamato, I intend to provide a definitive ending.

Continue to the next Nishizaki article:
1981 essay from My Anime Magazine