Elsewhere on this website is a section devoted to the “Legacy Years” of Space Battleship Yamato, that long period that began when Final Yamato left movie theaters in 1983. In one of many intriguing parallels to Star Wars, there was a stretch of time when it seemed like Yamato was over forever. But the fans weren’t quite ready to accept that.

Fan activity was slow for a while–there was a lot of other anime to watch, after all. But everyone found new reasons to raise the flag when a renaissance of “legacy merchandising” arrived in the 1990s to carry Yamato into the 21st century. Now, of course, we’re into a whole new wave of production years that began in 2009 with Yamato Resurrection. And in some cases, the fans themselves are steering the ship.

Junichiro Tamamori is one of those fans. He achieved international recognition with his phenomenal concept art which, in the manner of the Playstation games and other projects, updated Yamato for modern tastes without losing any of the original magic. “Tama” made friends around the world with his personal website, Yamato Mechanics, and gained even greater recognition when he was invited to participate in the Space Battleship Yamato 2199 TV series. The official 2199 website’s gallery page (shown above) opened with some of his art in December 2011; click here to see it full size.

Fortunately for us in the English-speaking world, Tama is also bilingual, which made this interview much easier. It was conducted by email in December 2011 and January 2012.

First, please introduce yourself, state your age and where you come from.

I was born in Okinawa, Japan in the late 1960s when Okinawa was controlled by the U.S. military.

You are one of the rare bilingual Yamato fans. How did you learn your English?

I learned English at ordinary school the same as other people. About my environment, many Americans and foreigners have lived in Okinawa. I think an international language like English is a convenient and useful tool for communication on this planet. 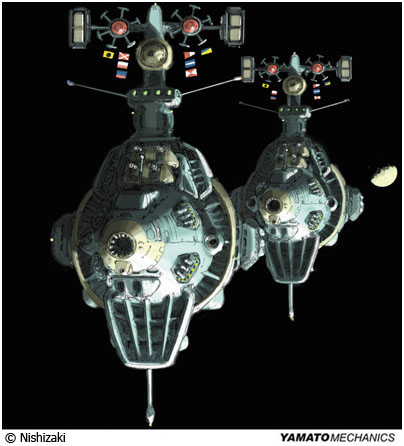 How did you become an anime/manga/SF fan?

In my childhood, the anime boom occurred in Japan from the first Yamato. In the 1980s, many young people became anime fans.

Did you see any anime or tokusatsu before Yamato? What are your memories of them?

Sure, I watched anime and tokusatsu every day. There was Kamen Rider, Ultraman, Mazinger Z and many others. I liked Getter Robo best of all because the giant robot had an innovative, functional combination system. The three different combat machines were able to combine into three different giant robots. I made an animated flip-book of their combination sequence for my friends.

What was the first Yamato you saw? What are your other anime favorites?

My first Yamato was the original on TV in 1974.

Was there a single thing in Yamato that caught your attention first, or was it everything combined?

“It’s cool! A rocket combined with a battleship!”

What are your favorite things about Yamato?

My favorite thing in Yamato is that it has messages for both adults and children. What I admire about Yamato is that they don’t use the Wave-Motion gun as a weapon of mass destruction against humans (first series only.) We can experience how vain it is to be both loser and winner, especially in the first series.

Incidentally, I was born near the ruins of the Imperial Japanese Navy (IJN) headquarters which had a long wait for IJN Battleship Yamato when a fierce battle was fought during the battle of Okinawa in WWII. I played in an underground air-raid shelter with my friends in my childhood. I pretended these ruins were the underground city and Earth Defense Force HQ attacked by Gamilas in 2199. Today, these ruins have been developed into a Memorial Park. (See photos here.)

The shelter interned over 4,000 soldiers. Large numbers of soldiers from both Japan and the US were killed by action along with Okinawan residents. I sometimes visit the memorial of war dead and especially that of the Battleship Yamato crew for repose from the time I launched Yamato Mechanics. So when I think about Space Battleship Yamato, I perceive it to be inseparable from how we make peace.

What are your other favorite anime programs?

Those are strong “SF robot” programs. Was that your favorite kind, or did you also like others?

SF robot programs in Japan after Gundam in the 1980s were in the “Real Robot” genre, explainable by real world science and technology. In their genre, I like Macross the best of all. I also recall the great Leiji Matsumoto series Galaxy Express 999. It was a beautiful, fantastic anime. 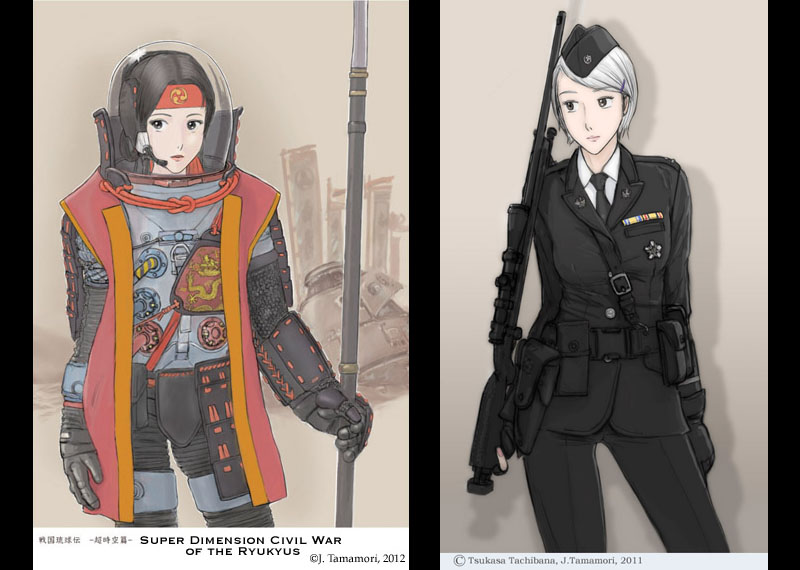 What inspired you to become an artist? Did it happen naturally, or through training?

Drawing and handicraft have been familiar to me since my childhood. Sometimes my father painted as a hobby when I was a child. I knew about art-related jobs like design when I was a student, and then went to art school to receive professional training. I started my career as an industrial designer at Yokohama, Japan.

What did Industrial Design teach you?

Every part of the product weaves together and has a reason for being, like a living creature.

Were you ever inspired to make your own manga or create your own stories through drawing?

Sure, I want to create anything but I don’t have the skills to create my own manga or stories. I like to draw future vehicles and portraits of cool women nowadays.

When did you begin to your focus on Yamato art?

Your personal website Yamato Mechanics was very popular with other fans.

Yamato Mechanics was my personal, non-profit website to consider a realistic update of the mechanics of Yamato from 2001 to around 2006. There were many illustrations of Yamato drawn by me, and contributions by other fans. The main contents were an illustration gallery drawn by me.

I stopped gradually from 2005, because official Yamato activities started to become brisk and Yamato Mechanics had become famous. The Playstation game series was released, and I started to work as mecha designer in the Anime industry. 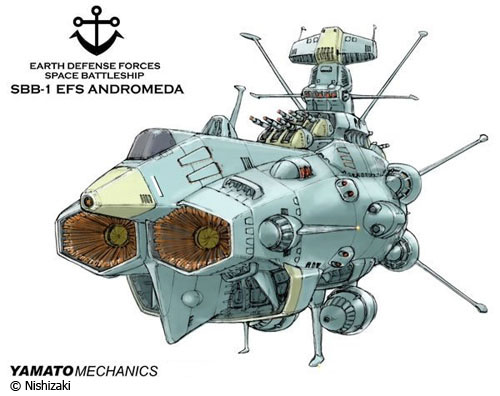 Gundam was stacked all over the place in the 1990s, and nobody was able to get any Yamato toys, plastic models or books. The space battleship called Yamato had been sunk underwater without being baptized in the Real Robot genre, and was held up pending court decisions. I missed it and was determined to revive Yamato in a way suitable for the 21st century. It was my personal motive to design a new concept of the Yamato world. The motto of Yamato mechanics was “update the Yamato World.”

So how did we update it? I started by drawing conceptual illustrations and wrote their captions. I took care to remain objective and represent not only my own personal taste in order to gain the sympathy of as many people as possible.

Knowing the thoughts of many Yamato fans around the world contributed to the achievement of the goal. I exchanged communication with fans on the BBS, and I knew about Japanese fandom via the web directory Yamato Web Ring by Kamekichi Osada. I saw the doujinshis Yamato Zakki-cho [Notebook] by Zenta Mizuno, Project PS Story by Tatsuhiko Iida and Galaxy Navy by Takeshi Izumo. They have had the same ambition as me and kept on with fan activities for a long time at Yamato Party meetings and such.

I learned about worldwide Yamato fandom at Spacecruiseryamato.com by Edward Hawkins. I got precious information from US fans who had careers as long as Japanese fans. I saw the chronological table of Yamato History by “The Iscandar Project” and Bruce Lewis and gained an overall consideration of the Yamato world from the Star
Blazers Fleet Battle System game. The book “SBFBS Technical manual” by Keith Johannsen was especially groundbreaking. It had a broad range of chronological tables and the ship-naming doctrine of the EDF, Gamilon Empire and White Comet Empire. It respected the original Yamato world and coordinated inconsistencies to make them well-matched. (I hope it can be published as an ebook.) 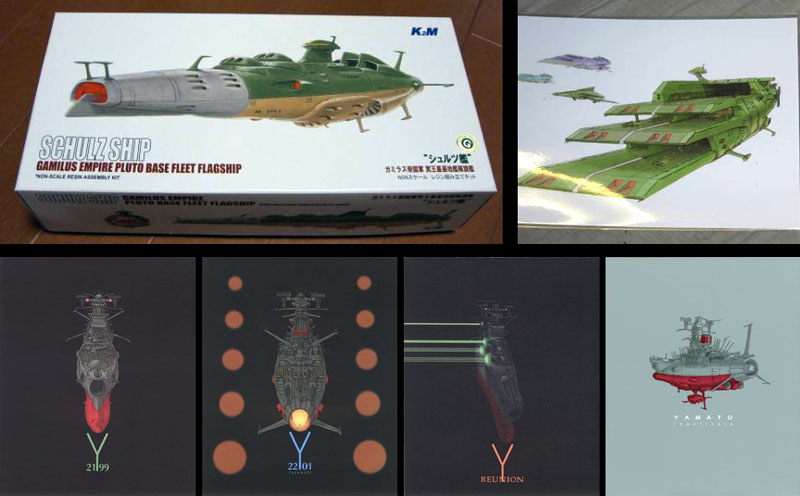 You said you did mecha design for anime. What projects did you work on?

I designed main mecha for the DVD anime series Hoshi no Umi no Amuri [Amuri in Star Ocean, 2007], written and directed by Yoshitomo Yonetani. I also designed a few vehicles for the TV anime series Scarecrowman the Animation [2008].

One of your skills seems to be that you can interpret a simple element in the anime design (for example, the crew uniform) in a new way, and modify it to have a function. Do you modify everything to have a function first, or to look “cool” first with a function to be imagined later? 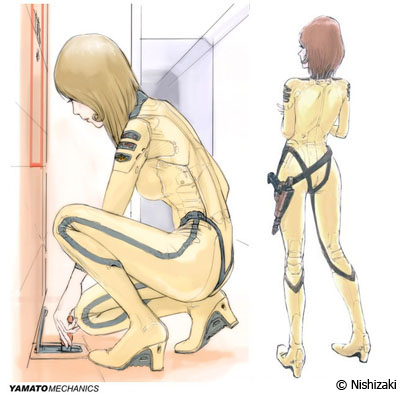 About the methodology of Yamato Mechanics, the order was not very important during the modification procedure. It was iterative and incremental development. There were repeated changes of view for the visual, function and story [background] to draw an illustration. The ideas contained in a scenario supported the illustrations. To be exact, the deliverables of a Yamato Mechanics illustration could not exist without the caption text. So the work was to consider the way rather than simply to draw.

Do you work on paper, or digitally, or is it a mix of both?

In the early days, I drew the illustrations with a ball point pen or mechanical pencil on paper and painted them digitally. Now I draw them full digitally using a digital pen.

Is there a part of your website now that contains only your art?

No, but happily the days have arrived when Yamato is attended by many people. Let’s support official Yamato content like the live-action movie, Resurrection, or 2199.

Were you contacted by Enagio Studio to work on Yamato 2199, or did you apply for the work?

Do you have a favorite artist or designer who inspires your work?

I have many favorite many creators include designers and artists who love Yamato Mechanics. All of them are fond of the 1980s Real Robot genre.

What is your basic opinion about each Yamato work, including the live-action movie?

In the first Yamato, the vessel was represented in a stately manner. I like the stately and heavy vessel of the first series. So the live-action movie and Resurrection are good. I like them. But I like the modernized version of Yamato in Be Forever and Final Yamato, too.

If you could remake your least favorite part of Yamato, how would you change it?

I would change Okita’s revival in Final Yamato if I could.

Is there any US work that you feel is as good as Yamato?

I like Star Wars. It is wonderful but I am not so devoted to that as Yamato. When Yamato was exported, it no longer belonged to just one country. It has built an image in every country. For example, there are the Comico comics, the fan art of Brian Rivers and the wonderful work of Don Gaiser.

We’ll have to interview you again after we’ve seen 2199 so you can talk openly about your contribution. For now, what message can you give to us as we wait for the new launch of Yamato?

I hope Yamato 2199 vitalizes many people, not only Japanese, so we Japanese will bounce back from a disaster. Because humankind will already be doing it from the future in 2199, I think. 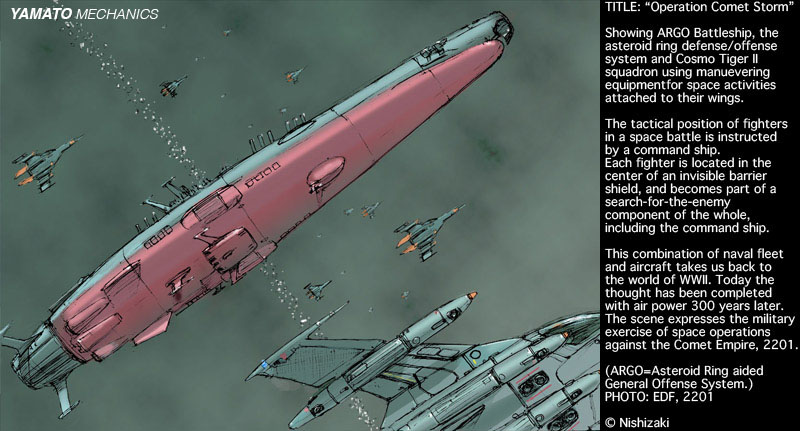