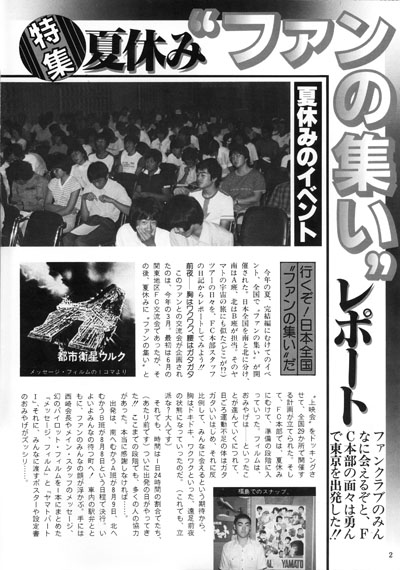 Special Event of the Summer

Here we go!
“Fan Gatherings” all over Japan

This summer, heading toward The Final Chapter, “Fan Gatherings” were held across the country. Japan was divided into south and north. The A group took charge of the south, and the B group took charge of the north. Every day of the tour resembled Yamato‘s trip into space (where!?), and this report comes from the diary of the fan club headquarters staff!!

The night before – the chest pounds, the waist rattles

Exchange meetings with the fans were planned from March of this year. Afterward, although there was a Kanto-area FC exchange meeting at first in June, “Fan Gatherings” and “Screening Societies” were docked to the summer, and a plan was formed to hold meetings at 29 places across the country. The preparation stage began in FC headquarters as summer vacation approached. Films and souvenirs were organized – lack of exercise had the body shaking, but the heart pounded with excitement in inverse proportion from the expectation of meeting everybody. It ended up feeling like the night before a trip. (Is that how a full-grown adult should feel?)

Still, time passes at a rate of 24 hours a day (obviously) and launch day came at last! Even at this early stage, there was cooperation by many people. We really appreciate them…

The schedule called for the B group to head north on August 8 and the A group to head south on August 9, toward the towns where everyone was waiting! With lunches in the car, all the fans’ faces floated by. In hand was the “Message Film” from Chairman Nishizaki and the main staff, the “Yamato Part 1″ pilot film, and souvenir posters and design books to pass along to everyone…very heavy.

Left: A frame from the Message Film. Right: a snap in Fukushima 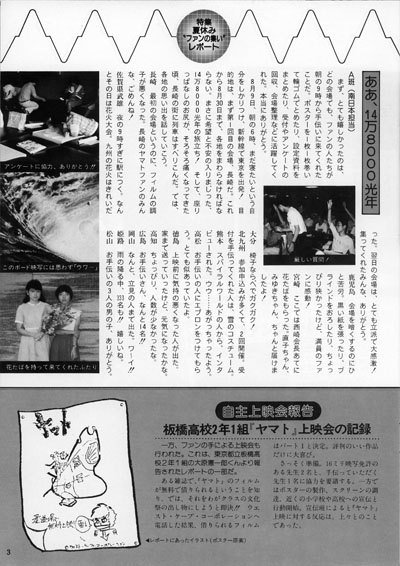 First, at every hall we were glad when fans came to help at 9:00 in the morning. They wrapped rolled-up posters with rubber bands, stacked up design books, and played active parts at the reception desk to collect questionnaires or organize the meeting place. Thank you very much.

Got up at 6:00 in the morning on August 9 to leave Tokyo by bullet train, but still wanted to sleep. The destination was the first meeting place, Nagasaki. We’ll be traveling around until August 30. Hope and anxiety mingle, just like on a 148,000 light year journey! Then, around the time my butt started to hurt from sitting, the train pulled into the city of Nagasaki. Now, let’s talk about memories from each place.

Nagasaki: In the first meeting place, something went wrong with the film. Sorry to all the Yamato fans of Nagasaki!

Takeo city, Saga Prefecture: arrived at the station after 9pm. Fireworks display on that day. The fireworks of Kyushu are beautiful. Next day, the meeting place was excellent, and we were very moved! Thanks to everyone who came!

Kagoshima: It was a struggle to darken the meeting place. We put up black paper and lowered the blinds. It was a bit small, but we were impressed by a full house!

Miyazaki: Flowers were sent to Chairman Nishizaki here. Naoko-chan and Miyuki-chan, they were delivered perfectly!

Left: Thank you for doing the questionnaire!! Center: Reaction to this scene: Waaah! Right: The two who brought flowers.

Oita: All the chairs were wobbly!

Kitakyushi: There were many applicants, so two meetings were held. The person who helped at reception was in a Yuki costume.

Kumamoto: An interview was done by someone from Spiral World. Waah…everyone is in high spirits. 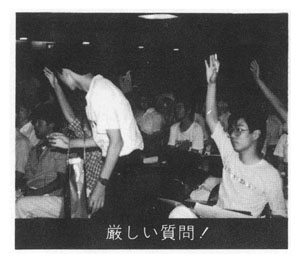 Takamatsu: We got aprons for people who helped out. Looked very suitable.

Tokushima: Someone got sick before the screening began. I wonder if they got home OK.

Kochi: A small number of people.

Hiroshima: 14 people and a housemaid!!

Himeji: 333 people turned up in the rain!! Really glad.

Matsuyama: To the three boys who helped, thank you. 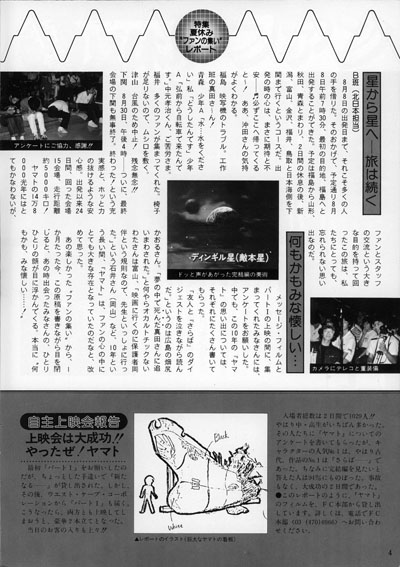 From planet to planet –
the journey continues

Prior to the departure date of August 8, many people lent a hand. Thanks to that, we left on time at 7:30am. We started at the first destination, Fukushima. From there, the schedule was to visit Yamagata, Akita, and Aomori, rest for two days, then on to Niigata, Toyama, Kanazawa, Fukui, and of course along Sea of Japan side to Tottori and Shimonoseki. Anxiety and expectation at the time of departure, and hope to return. Oh, I understand Okita-san’s feelings well.

Aomori: Boy A: “Water…water, please.” Me: “What happened?” Boy A: “I came by bicycle from Hirosaki.” [Translator’s note: about 25 miles.] Koji Nakamoto-kun, thank you for your hard work.

Fukui: many fans gathered. Not enough chairs, so we had to spread out mats.

Tsuyama: Cancelled because of a typhoon! Deepest regrets!!

Shimonoseki: August 30, 4:00pm – finally finished at the last meeting place in Shimonoseki with no problems. It’s over! A sense of fulfillment and security that comes from the power of relief. 15 meeting halls since we started 24 days ago, about 5,000 km distance!

Although it’s no match for Yamato‘s 148,000 light years, this important trip of exchange meetings with fans is an unforgettable memory for us.

Left: Thanks for the questionnaires!! Center: Voices were fast and furious over the art for The Final Chapter.
Right: Heavy camera and tape recorder equipment.

All such good memories…

We handed out questionnaires to everyone who gathered to see the Message Film and Part 1. In particular, we asked them about their memories of the last ten years, and everyone wrote a lot. 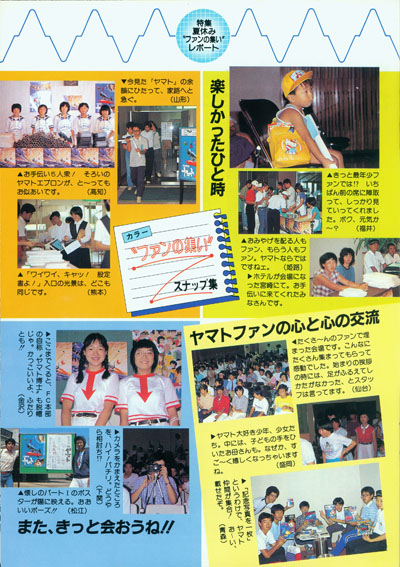 “I cried while reading a friend’s digest of Farewell to Yamato.” – Ms. Kaoru Hatajiri of Hiroshima

“I was chased in a dream by a dead Sanada.” – something occultic from Mr. Iwata of Toyama

“Since the rule was to see the movie with a parent or guardian, I went with my teacher.” – Mr. Ishii (Okayama), who reminded me that it’s been a long ten years, and I thought again about how Yamato has a major presence in the heart of the fans.

A month has passed since the “Fan Gatherings,” and if I close my eyes as I write this article, the face of everyone I met at the time floats into my mind. Really, “All such good memories…!”

[Translator’s note: the writer here is quoting Captain Okita’s last words from the end of Series 1.]

Click here to read a translated version of this photo page

Continue to the next part: The Yamato “Message Film”