Shortly after Yamato 2 hit Japanese airwaves in the fall of 1978, the race was already on to create the next Yamato story. Producer Yoshinobu Nishizaki and Director Leiji Matsumoto were both hard at work on the day-to-day demands of a TV series, but they were not too busy to feed plot ideas to the writing staff for “Yamato Part 3.” The format of this next adventure had not been decided, though most assumed it would be another feature film with the potential for a followup TV series. This, after all, was the format suggested by their earlier successes.

Thus, the quest began for a story that would please and excite everyone. In the months of January and February 1979, the writers created and modified several story treatments, passing them back and forth and building one idea on top of another. Inevitably, some fascinating but untenable concepts were discarded. In this series of story drafts, we get a look at other directions The New Voyage might have taken. All translations are by Michiko Ito, edited by Tim Eldred.

Yamato is Returning to Earth

Yamato, which achieved victory at the end of the bloody battle with the vicious White Comet Empire, is severely damaged and returns to Earth.

The citizens of Earth fervently welcome Yamato. We see the ceremony for a triumphal celebration, awards from the Federal Government, parades, etc. Kodai and the others immediately become heroes. Yamato is drydocked as an honored battleship and gets repaired. The warriors can finally rest.

However, based on his bitter battle experience with the White Comet Empire, Sanada proposes to install new equipment and dedicates himself to the task. Meanwhile, the Earth Defense Force starts rebuilding the fleets and space fighter squadrons.

A Wedding Between Kodai and Yuki

Several weeks later, Kodai and Yuki’s wedding ceremony is held in front of the memorial statue of Captain Okita at Hero’s Hill. Shima is there, along with Sanada, and all the other surviving crew. The Commander also attends with a smile. A blessing from the President is delivered. In her wedding dress, Yuki looks as beautiful as a flower and Kodai is in a sweat with excitement. A picture of the happy couple is broadcast throughout the world.

However, Kodai feels a touch of emptiness.

“Our happiness is grounded on the sacrifices of Kato, Saito and the others, are we alone allowed to have such happiness?”

Yuki says, “Don’t think that way; I’m sure Kato blesses our happiness. He fought and died in order to protect the happiness of the citizens of Earth.”

Kodai also feels uncomfortable that the survivors are regarded as heroes.

“The true heroes are Kato and others. Above all, the most determined victory was obtained by the sacrifice of Teresa, not by Yamato or us!”

And in his eyes appears the figure of Dessler, who left the battlefield in the middle of combat. 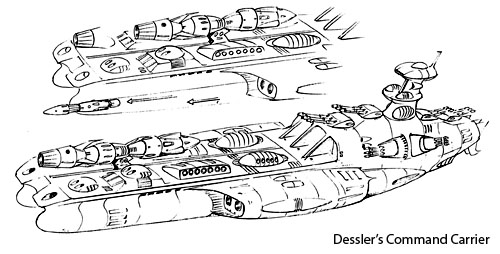 “Where did Dessler go…?”

The remaining Gamilas fleet led by Dessler is sailing through space, seeking a new planet to rebuild the great race of Gamilas. Dessler is not the same man he used to be. Seeing the love between Kodai and Yuki, he is truly awakened, and he aims to build a new state with the principles of love and peace.

But first, to bid farewell to the mother planet Gamilas, he heads for the Magellanic Cloud.

The Eighth Planet of the Sanzar System, Large Magellanic Cloud

There are the familiar twin planets, Gamilas and Iscandar. The two planets are destined for extinction. On Iscandar live Starsha and Mamoru Kodai, blessed in their eternal love. Dessler, who has held respect and friendship for Queen Starsha, sends her a message. However, there is no response. Dessler becomes suspicious and approaches Iscandar.

Before his eyes, Gamilas and Iscandar receive a fierce attack from a gigantic flying object.

Astonished, Dessler sends rescue ships, but they are instantly attacked by fighters and have to withdraw. Then the Planet Gamilas explodes, and the energy caused by the explosion seemingly causes Iscandar to disappear. Computer analysis shows the entire planet went into a warp. It is also proved that the giant flying object is heading toward the emerging point of Iscandar after its warp.

“Starsha must be rescued. This is the first challenge to my new ideals and my new way of life.” 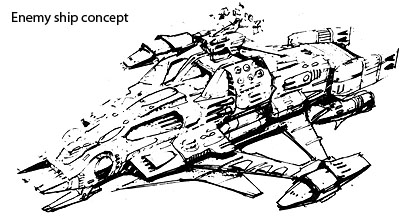 However, the giant flying object, a huge spaceship, persistently attacks the Dessler Fleet. While avoiding the attacks and searching for Iscandar, Dessler realizes that the enemy ship has military power equal to the White Comet Empire and holds evil intentions. Dessler informs Kodai of this new danger.

On Earth, four months have passed since the return of Yamato. Kodai and Yuki enjoy their honeymoon. The report from Dessler disturbs their happiness.

“Isn’t this a trap set by the evil Dessler?”

Kodai persuades them that Dessler has changed his ways. The repaired Yamato must be immediately dispatched. After the battle with the White Comet Empire, the Commander of the Defense Force recognizes that peace on Earth cannot last if there is not also peace in space. Everyone is persuaded by the recommendation of Kodai.

Yuki is upset. The happiness she finally found is now broken again. However, Mamoru Kodai and Starsha are still on Iscandar. Their happiness is also endangered. Yuki agrees with Kodai and asks to go with him. “I live and die with you. I’m always with you.” Knowing her decision is firm and unshakeable, Kodai permits her to accompany him.

Shima, Sanada and other crewmembers assemble at Yamato. New Cosmo Tigers also participate. With the cheers of the citizens of Earth, Yamato launches. This is different from the lonely departure of Yamato half a year ago.

Space, the Edge of the Galaxy 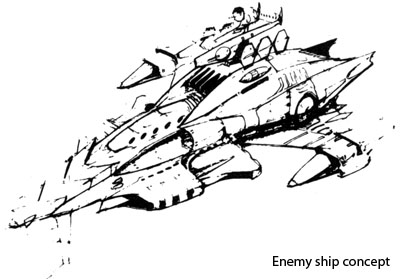 At last, Yamato appears after several warps. Kodai and Dessler reconfirm their friendship. Aiding the damaged Dessler Fleet, Yamato faces the giant spaceship, but even with its new equipment, Yamato is no match for this opponent. Yamato‘s damage increases, and Kodai becomes irritated.

“Brother! Starsha! How are they now…?”

has been exhausted by repeated warps. The planet will soon fall to attacks from the enemy ship. Starsha asks Mamoru to evacuate.

“Starsha, only if you will go as well.”

However, Starsha says, “I was born on Iscandar and have lived on Iscandar. I, the only surviving Iscandarian, cannot abandon my planet.”

“Starsha, I am now an Iscandarian, too,” says Mamoru. “If you stay, then so will I.”

“Mamoru, please! I want YOU to survive!”

Mamoru quietly shakes his head. “I knew that Iscandar would not have a long life, but I decided to part from Earth for the sake of our love. How can I leave you and escape alone?” 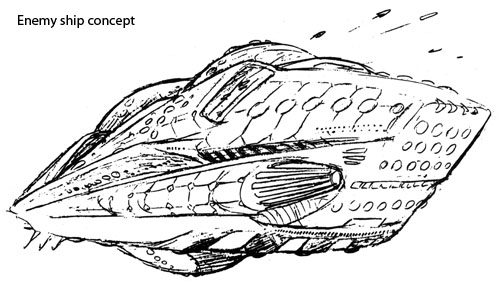 Starsha is pleased by his words, but she keeps persuading. Meanwhile, Iscandar still suffers from space warps and the attacks from the giant ship.

They finally succeed in making contact with Mamoru during a brief moment after Iscandar de-warps. Sanada has built a device that cuts through the jamming waves.

Brothers meet again after two and a half years, but Mamoru’s reply is cold.

“I am not an Earthling anymore. I will follow the destiny of this planet as long as Starsha stays here.”

“Big brother! I am now your sister-in-law!”

Nonetheless, communication from Iscandar is cut. 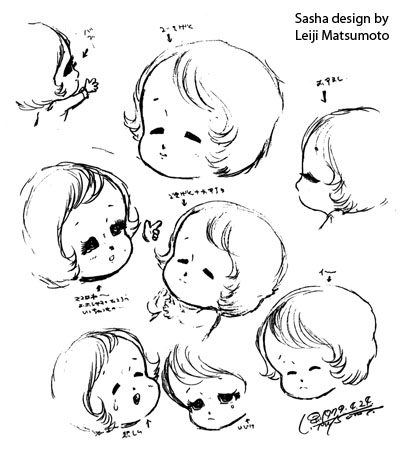 The fierce battle continues. Even the giant spaceship is losing strength after desperate attacks by Yamato and the Dessler Fleet.

Starsha leads Mamoru to an escape capsule, telling him that she has changed her mind and accepted Yamato‘s offer of rescue. Then, from outside the capsule, she closes the door and launches it, to Mamoru’s astonishment. Now all alone, Starsha sets an auto-warp course directly at the giant spaceship, using all her remaining psychic strength.

After one more warp, Iscandar reappears in space and crashes into the giant ship. The remains are scattered, leaving a brilliant light behind.

Then, in the now-tranquil realm of space, the image of Starsha appears, praying.

Kodai and others (including the rescued Mamoru) gaze at the image in tears. Mamoru holds Sasha, the daughter of Starsha and himself, in his arms. Yuki tells Kodai that a new life is inside of her…

Dessler also sees the image of Starsha, then he sets off, promising Kodai they will meet again. But Yamato is being watched…

with cold eyes–from the mother ship of the giant spaceship.