Yamato returns home and guides the last emigration fleet safely away. Before moving to follow, Kodai takes one last look at their doomed planet and offers a soliloquy on what it has meant to the human race. The last shot of this speech is a closeup that, for some reason, looks slightly different in the original (above left) than in the DC (above right) That’s fitting, because we’re now about to be plunged into the biggest change of the film: the ending.

Let’s start by re-examining the original. Metsler reappears in his demon form and tips off Kodai that the Cascade Black Hole is, in fact, artificial. Metsler vanishes after vowing that his people will devour every bit of energy Earth has to offer. Kodai orders the crew into action, and Maho uses the ECI to locate a singularity within the structure of the Black Hole.

Yamato plunges headlong into its maw as it closes in on the Earth. The third bridge scrapes the inner edge and its armor is stripped away, endangering Maho and her ECI crew.

The Transition Wave-Motion Gun is readied; all six chambers will fire at once, which could destroy the ship itself–but everyone agrees that the survival of Earth matters more. Kodai takes the trigger and counts down, possibly for the last time in his life.

A mighty blast sends a massive stream of Wave-Motion energy into the singularity; it expands and then begins to implode.

Parts of Yamato‘s hull erupt from the enormous stress, but the shot succeeded! The Cascade Black Hole vanishes, leaving Earth whole and safe for life.

The crew celebrates on the bridge, but the victory was not without cost. The armor plating around the ECI was shredded, exposing Maho Orihara and her ECI crew to hard vacuum.

She is the last character we see before Yamato returns to Earth in triumph and the end credits roll.

That’s how it all played out in 2009. Now, wipe all that out of your mind, because the Director’s Cut is going elsewhere.

From the point of Kodai’s soliloquy, the mood becomes very somber. There is no Metsler, no talk of a singularity, and no pretense that there is a way to avert Earth’s fate. Yamato‘s crew stands in silent salute to their homeworld as the Cascade Black Hole closes the final distance.

Helpless to intervene, a speck in the vast cosmos, Yamato stands vigil as Earth is literally swept up. The black hole’s energy dissipates and the planet is simply gone.

The crew holds their salute a few moments longer, then a voice hails them over the radio. “Come in, Space Battleship Yamato…” It comes from the remaining fleet of the Earth Defense Forces.

Then we are treated to some exquisite beauty shots of the fleet. First (at left) we see flagship Blue Earth, a duplicate of Blue Noah, escorted by a fleet of Yukikaze-class destroyers. The caption reads, “Earth Defense Force Surviving Fleet (old battleship group).”

Next (at right) we see the Andromeda-class battleship A12 leading a group of patrol/cargo ships akin to those glimpsed briefly way back in Farewell to Yamato. The caption reads, “Earth Defense Force Surviving Fleet (inner-planet rescue corps).”

In these two shots, we have an echo of signature mecha from Series 1 and Series 2.

The voice on the radio is heard over these shots. It explains that the fleet is regrouping to leave the solar system and head to Planet Amare.

Two more shots follow. First there is a long-distance view of another battleship that resembles the Arizona from Series 3. It’s a Pennsylvania-class ship leading others of its kind. The caption reads, “Earth Defense Force Surviving Fleet (Neptune orbit rescue corps).”

Then we’re treated to something we’ve never seen before: a Yamato-like ship with its own unique bridge configuration. The caption reads, “Earth Defense Force Wave-Motion Experiment ship Musashi.”

The radio voice continues, delivering a single line that provides the entire impetus for the next story: Earth has been detected emerging from the supermassive black hole in the center of the Milky Way Galaxy.

That’s all Kodai has to hear. He informs the Earth fleet that Yamato will not be joining them at Amare. They have a new mission. The crew (which includes a very alive Maho Orihara) nods in agreement and Kodai shouts “Yamato, Hasshin!”

Space Battleship Yamato, undamaged, lumbers forward as the center of the galaxy spreads out in the distance ahead. We hear the voice of the narrator deliver the classic line about the vastness of space in which stars live and die in an endless cycle. And thus, space is alive.

To be continued? Let’s hope so!

So where did all those gorgeous new ships suddenly come from? Actually, it wasn’t sudden at all. They all have a precedent somewhere in Yamato history, even if that only goes back to the debut of Blue Noah at the beginning of Resurrection. They were all first revealed in print about six months before the Director’s Cut was released. Designed and rendered entirely by Makoto Kobayashi, they were featured (and named) in his Hyperweapon 2011 art magazine.

Of these, the one that raises the most eyebrows is Musashi. Fans have been speculating about that for decades; the name originally belonged to the second IJN Battleship in the Yamato class, a duplicate in every important way. She was sunk six months before Yamato, and when her predecessor was revived as a space battleship, fans naturally thought of her as the next candidate for a rebuild.

Designer/Director Makoto Kobayashi, as big a Yamato fan as they come, had the same idea. He began to develop it all the way back in 1993 when Yamato Resurrection entered its first phase of production. He also created a backstory for it, which was finally revealed in a special booklet that was included in the Yamato Resurrection Complete Box. That backstory is presented here along with some other ship designs that didn’t make the cut. 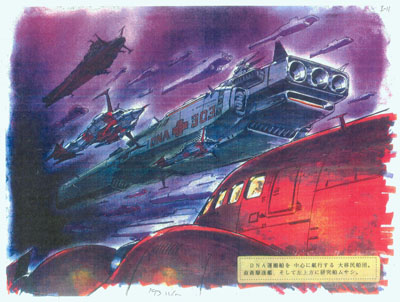 Wave-motion test battleship Musashi was set up in an early stage. There was a plan to use it as a test for Yamato‘s restoration and as the flagship for the first emigration fleet. For other EDF vessels, battleships of familiar design were prepared for Yamato fans.

Yamato project planning is approved by Earth Federation Congress. It starts with a survey of the destroyed Yamato sunk in Aquarius. Review of the internal design is carried out.

Survey of Yamato is completed. The hull is divided into three parts and its damage is much more serious than expected. In order to raise the possibility of restoration and reaffirm the plan, restoration begins for the battleship Musashi, sunk in the Sibuyan Sea.

It is confirmed that residual energy is present in each part of Yamato‘s generator. Gravity ballast is removed by remote control, and utilizing the residual energy in each section, work begins to raise the separated hull sections 10 kilometers from the surface in order to rejoin them.

Battleship Musashi reconstruction dock is completed in the deep sea and full-scale restoration begins. Materials are assembled for building a duplicate reconstruction dock in the sea of Aquarius. Aquarius personnel start transferring to space colonies. A new Wave-Motion Engine is successfully designed and development begins.

Reconstruction is completed on the hull of Space Battleship Musashi. The possibilities of a new American design for the Wave-Motion Engine are taken into consideration and an overall review of Yamato‘s internal design is carried out.

Completion of Space Battleship Musashi. It launches on a mission of Wave-Motion Energy research in Pluto orbit. Musashi‘s restoration team transfers to Aquarius and completes preparation to begin work on Yamato.

Musashi‘s data on the study of wave energy and the Wave-Motion Engine lead to the completion of Yamato‘s internal design specs.

Space Battleship Yamato is raised to a point 10 kilometers from the surface and successfully rebuilt in the repair dock.

Repairs are completed on Yamato‘s hull and major reconstruction begins.

Yamato‘s reconstruction is completed. Testing begins on the new Wave-Motion Engine and the Transition Wave-Motion theory. Yamato‘s repair team leaves the maintenance staff on Aquarius and returns to Earth.

The present. [Editor’s note: two years were later shaved off this number to place the story in 2220.] 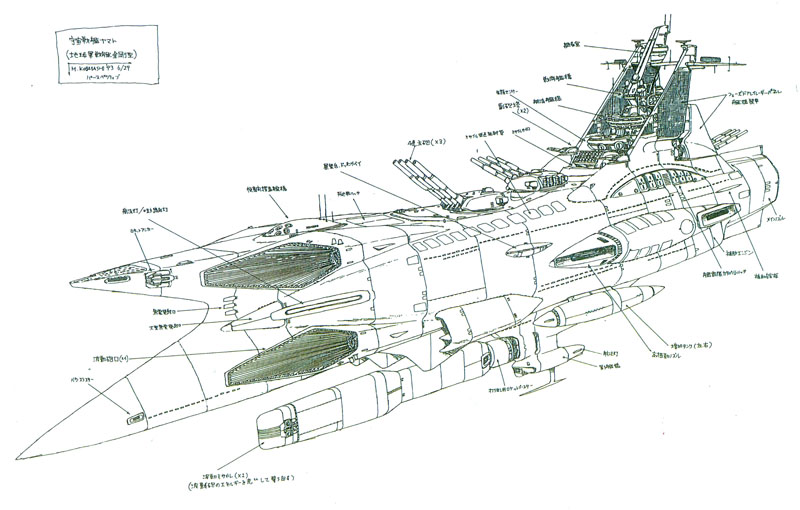