Two new Yamato “Quo” phone cards from the Nexus company came out in August 2000, joining a growing pile of similar cards from other makers. Quo made another card in early 2008 to promote the remastered DVD box for Series 1. 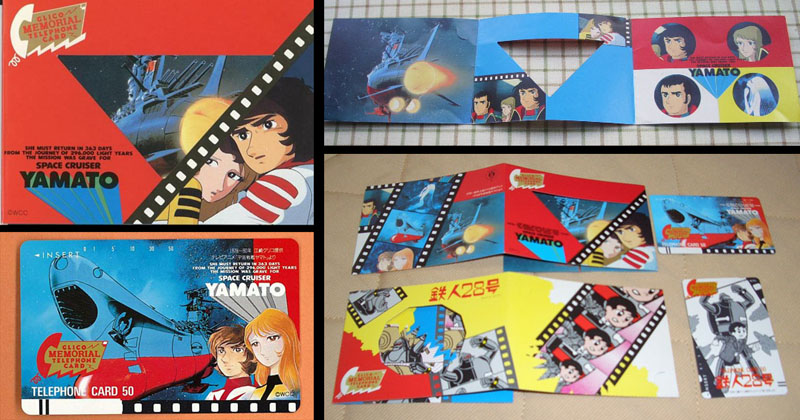 A special phone card also came from the Glico candy company to commemorate its years as a Yamato merchandiser (1978-1980), as examined here. 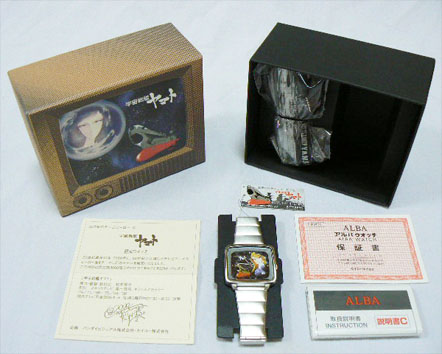 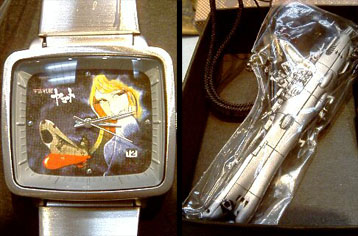 The Seiko company had a long history of anime tie-ins that began with an alliance with the God of Manga himself, Osamu Tezuka in the early 70s. They produced two Yamato watches in 2000. One was a Great Yamato tie-in, but the other went back to the original. This offering in Seiko’s “TV Hero” line came with a bonus metal Yamato to dangle from whatever was handy.

Seiko followed up with this Teresa pocket watch in 2001, also accompanied by the Matsumoto signature. 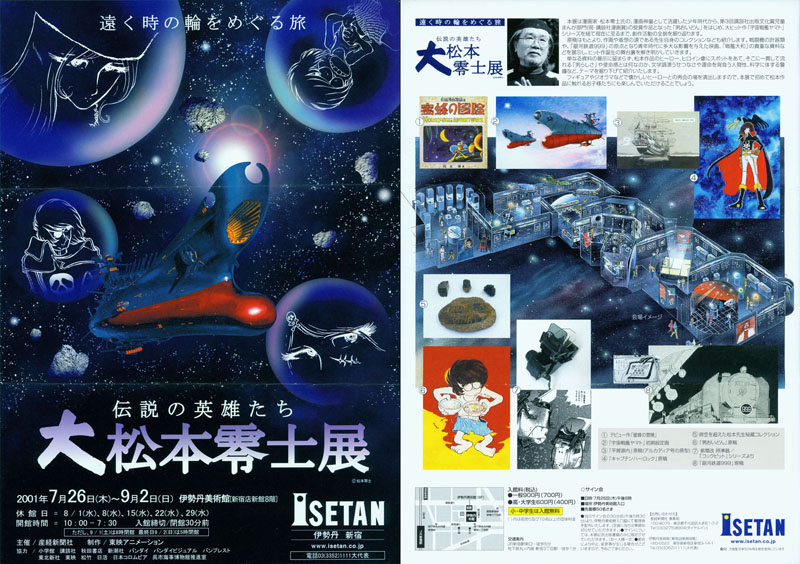 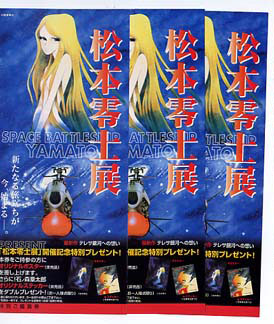 The World of Leiji Matsumoto Exhibition had become a sort of annual event after its kickoff in 1998. The touring show commenced in the summer of ’99 to mark Yamato‘s 25th anniversary (and the debut of the Playstation game) and visited seven cities over twelve months. Doubtless much of the merchandise shown on this page was available in the gift shop. The World of Leiji Matsumoto II was a more modest affair with only three stops in June of 2000. A postcard promoting the latter two stops (in Osaka and Aichi) is shown below.

The Big Leiji Matsumoto Exhibition advertised on the flyer above was a revival of sorts, happening July-September 2001 at the Isetan department store in Shinjuku, Tokyo. The back of the flyer (above right) gives a sense of the event’s layout with all sorts of interactive attractions that must have kept fans drooling for hours. The photos indicate that artwork was accompanied by real-world artifacts such as the famed Revi C12D gunsight that figured prominently in his Battlefield manga stories and the 1982 Captain Harlock movie, My Youth in Arcadia.

See an enlargement of this flyer here.

Promotional flyers for another such exhibition are shown at left. 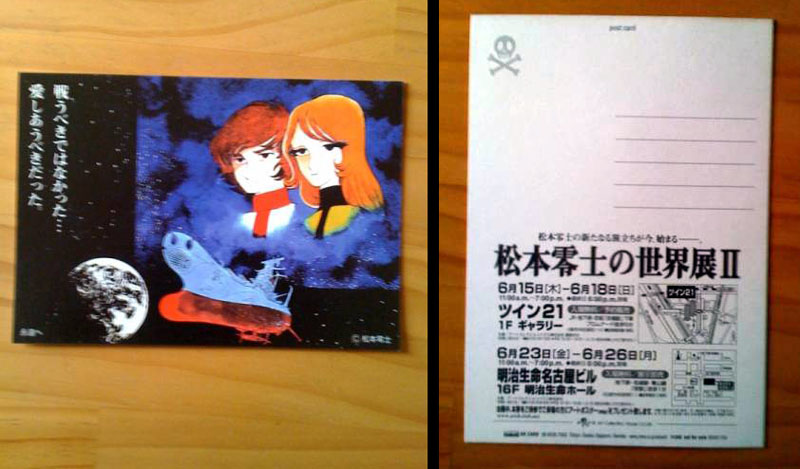 One of the products that was almost certainly sold in the exhibition’s gift shop was this limited edition (500) Zippo lighter triple set that combined to form a Yamato profile. Sold in an undoubtedly wallet-busting wood case, this handsome collector’s item was the masterpiece of Bandai’s Unifive division, maker of the previous 25th anniversary lighters. 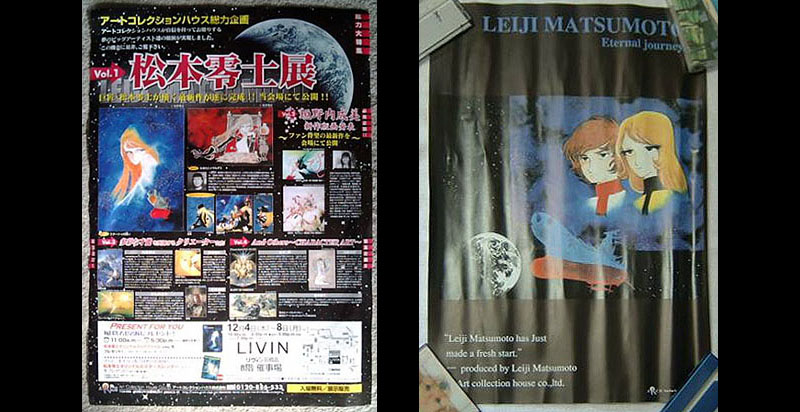 The poster above promotes another Matsumoto exhibition from Art Collection House, probably a smaller affair that is difficult to date. The poster at right, however, probably got printed near the beginning of their relationship with Matsumoto if the quote is any indication: “Leiji Matsumoto has just made a fresh start.”

More goods that were probably available in the gift shop: a Teresa postcard and a pair of clear files, plastic sleeves meant to hold whatever papers you’re traveling with…

…a set of cards from Art Collection House Ltd., packaged in a CD jewel case
(there were 14 in total, half of which were Yamato images)…

…and another set of postcards that were certainly more affordable than an art book. Of all these products, the only one with a firm date is the calendar poster (above right) which would have been released in late 2003. 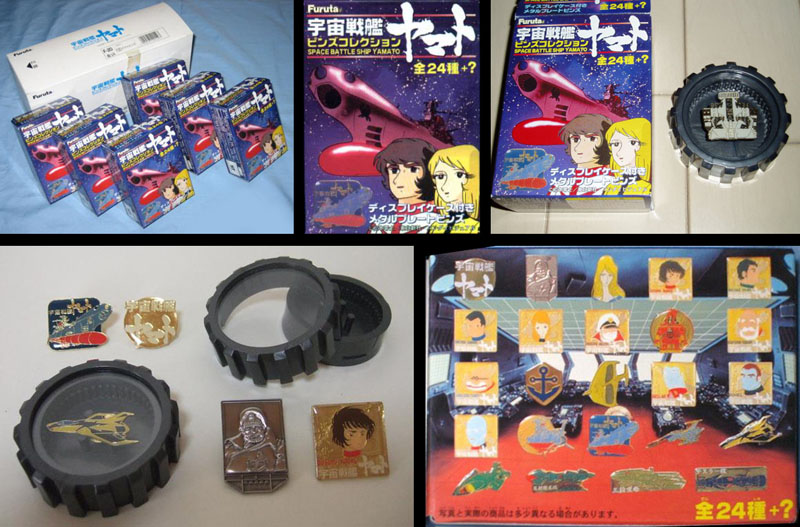 The trend of new collectible products continued into 2002. This collection of cloissone pins was released by the Furuta company in February 2002, a set of 24 plus two “secret” pins.

B-Club and Popy, two more arms of the many-tentacled beast known as Bandai, teamed up to debut a new line of garage kits in March 2005. The line would grow over the next two years to encompass 40 models, which included a select few re-releases that were fully assembled and painted.

April 2005 marked the 50th anniversary of the sinking of IJN Battleship Yamato. This was commemorated in grand style by the opening of the Yamato Museum on April 23rd in the port city of Kure, on the site where the ship was originally built. Every good museum has a gift shop, and though the one at Yamato Museum is small, there is no shortage of custom merchandising. One of the few anime items sold there is this 1/2000 scale display model in its own acrylic case, about 5″ long. Japan’s F Toys released three versions of it in 2006, grey and blue models for the general public (above left) and a customized one for the Yamato museum.

Who wouldn’t want a genuine Yamato crew t-shirt? This one and a too-cool-for-school black shirt were released through Bandai’s online Lalabit Market in September, 2005. Both of these were rereleased with two new designs in early 2010. BEAT magazine is the monthly promotional pamphlet for video releases from Bandai Visual and Emotion; shown above right is a commemorative collector’s card. Because why not? 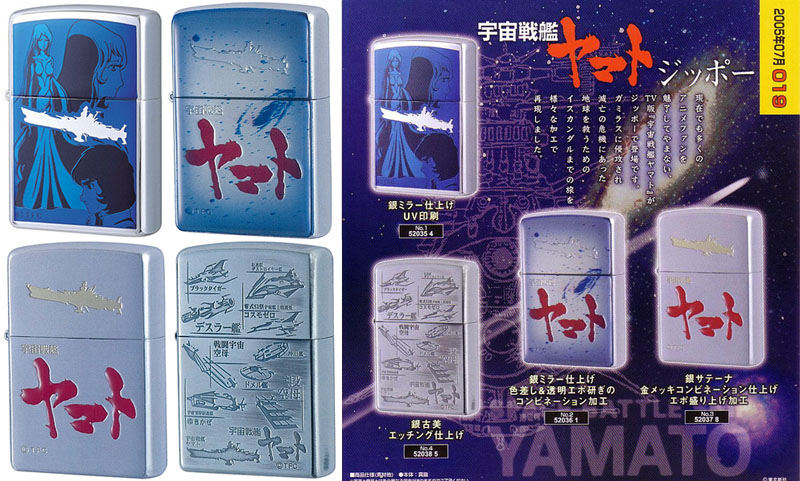 …and a selection of jigsaw puzzles made by Epoch in two different sizes. This company’s association with Yamato started all the way back at the beginning, when they published the very first product for series 1, the “Family Picture Story Show” card and record set. Read (and hear) all about it here.

An anime song “Orgel” (windup music box) featuring the Yamato theme song. Perhaps the only version that future archaeologists could still listen to.

The Kabaya Foods Corporation got in on the party with this set of 80 Yamato trading cards, released in November 2006. It covered the first series, Farewell, and Yamato 2 with subsets dedicated to characters, mecha, scenes, and poster art. It also included 8 chase cards with 3D, lenticular, and hologram images. This was a tough set to collect, since each envelope contained only a single card (and a startingly large sheet of bubblegum), but Kabaya made up for this with durability; each one is coated with credit-card-plastic and will last far longer than cardboard.

More from the Yamato Store…

Here are even more Yamato collectibles that were released during the legacy years. They are sectioned off here because their specific release dates are currently unknown.

Mini figures of the “Super Deformed” variety are quite common, but few have been made for Yamato. This, in fact, is almost all of them and no maker ID’s are visible.

The origin of these three different cast-metal relief panels, each of which can fit in the palm of your hand, is shrouded in mystery. It’s possible they were premiums offered by the Yamato fan club, but evidence is elusive.

This box of sweet potato pastries was another product of the Leiji Matsumoto tenure (1998-2002) and was the only Yamato food item of the Legacy years until 2009 when Yamato Resurrection spawned several more.