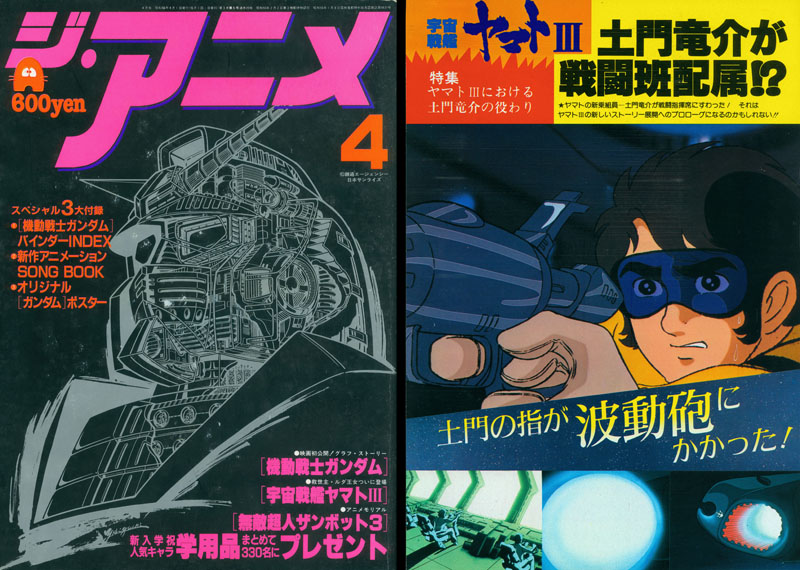 Ryusuke Domon is Assigned to the Combat Group!?

In the new crew of Yamato–Ryusuke Domon takes the combat command seat!

It may be the prologue of new story development in Yamato III!!

Domon’s finger is on the trigger of the Wave-Motion Gun! 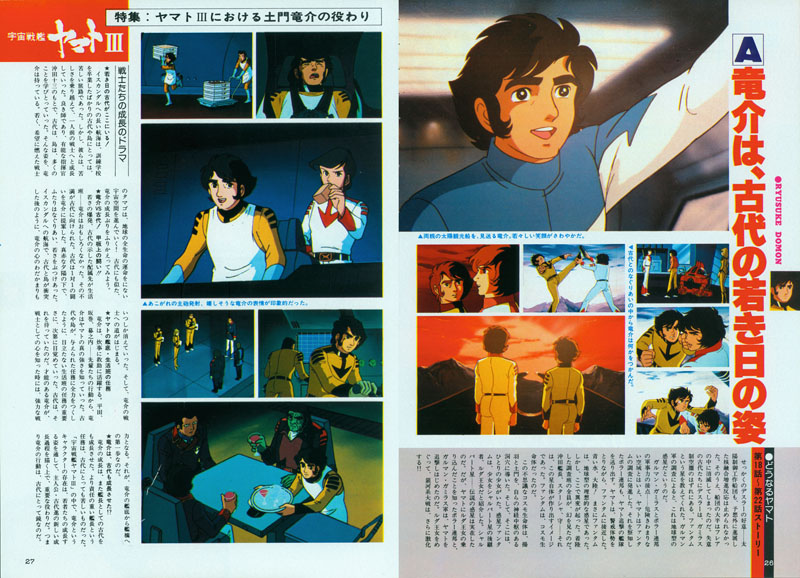 A: Ryusuke is the figure of the young Kodai

Drama of the growth of soldiers

The Kodai of younger days is here!

For Kodai and Shima, who had just graduated from training school, the long voyage to Iscandar was a hard one. However, through their hardship they matured into full-fledged soldiers. Under their great mentor Captain Juzo Okita, Kodai and Shima learned a lot. Ryusuke waits to become such a figure. This egg of a young soldier is fueled by hope, and travels into space so that all life on Earth will not end in fire! Let’s take a look back and see how Ryusuke’s growth resembles that of Kodai.

Domon vs. Kodai! Battle on the deck!!

The tipping point was when Kodai assigned Ryusuke to the life group–Ryusuke was not interested. He turned his dissatisfaction on Kodai, and Kodai challenged Ryusuke to a one-on-one fight. Under the glowing sunset, these two young people had a fistfight. Similar to when Kodai and Shima collided during the voyage to Iscandar, the feelings of antagonism in Ryusuke’s heart gradually faded away, and the way to Ryusuke the soldier began.

Ryusuke played an active part in the cooking division. From the behavior of his seniors, such as Hirata, Sakimaki, and Makunouchi, Ryusuke came to know the true strength of Yamato. As Kodai and Shima gave all their energies to their duty, he gradually awakened to the importance of inconspicuous duty in the life group. Kodai was waiting for this. When the talented Ryusuke gained the heart of a soldier, he would be a powerful force. The first step toward the bridge is at the bottom of the ship.

The growth of Ryusuke also brought growth to Kodai as the captain. The position of captain with its heavy responsibilities was difficult for Kodai. In Yamato III, the presence of Ryusuke as the figure of youth growing up is important to the growth process of the hero Kodai in his role. In other words, the action of Ryusuke is a mirror for Kodai. 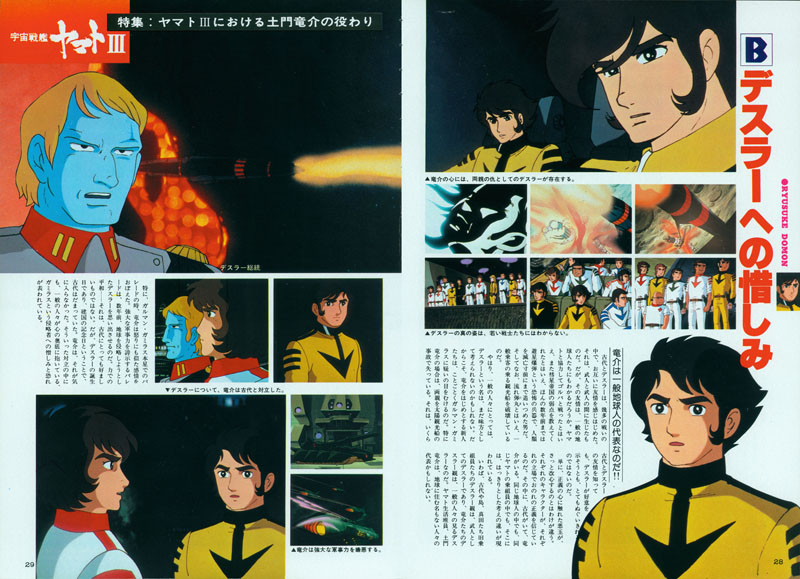 B: The attitude toward Dessler

After many battles, Kodai and Dessler began to feel a friendship toward each other. It is something that occurred between two warriors. But the average Earthling may not understand such a friendship.

Although Dessler fought against Goruba in cooperation with Yamato and revealed the weak point of the Comet Empire, he used weapons of terror called Planet Bombs until just a few years ago, and is the man who pushed the human race to the brink of extinction. Furthermore, though it was a stray shot, the tourist ship with ordinary passengers was destroyed. For the public, the name Dessler may not yet be considered that of a friend.

Therefore, new faces including Ryusuke can turn the eye of doubt toward Galman-Gamilas; especially Ryusuke, since his parents were accidentally lost on the solar tour ship. No matter how much he knows about the friendship of Kodai and Dessler, it is hardly something that can be dismissed for the sake of good will. Reason differs with a villain who touched the heart of justice and seemingly reformed so quickly.

Each character has their own belief and viewpoint of justice. This is true of both Kodai and Ryusuke. Among the crew of Yamato and Earthlings alike, a difference in opinion has clearly appeared. On the old crew, Kodai, Shima, and Sanada view Dessler as a warrior, and Ryusuke’s view of Dessler is that of the average person. As a member of Yamato‘s life group, Ryusuke Domon may be the representative of anonymous people living on Earth.

Especially during the parade on Planet Galman-Gamilas, Ryusuke felt emotions like anger. The parade showed off the mighty military strength that brought up memories of how Dessler tried to invade Earth a few years earlier.

Peace through power–not a desirable thing even for Kodai. However, since it was Dessler’s birthday and the memorial day for the founding of his nation, Kodai remained silent. Ryusuke was not pleased with that. Against such opposition, the general public would embrace fear and hatred of the invading Gamilas from the depths of their heart. 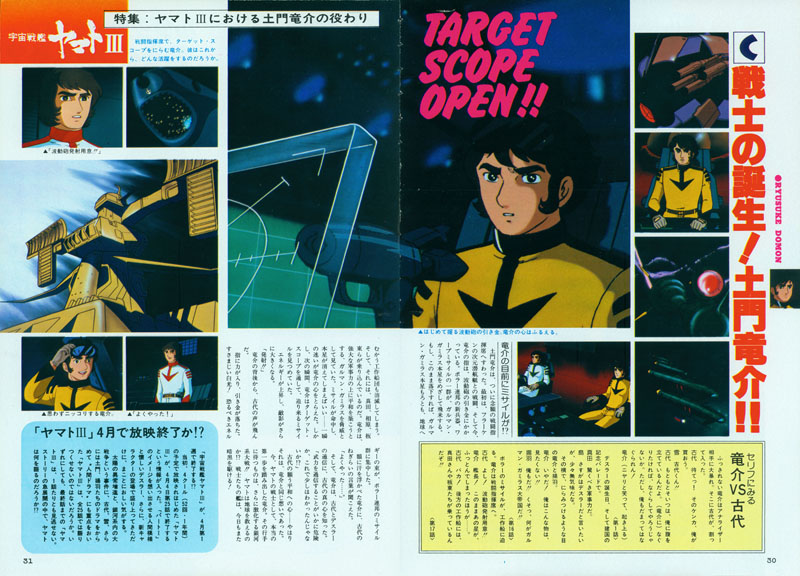 C: The birth of a soldier! Ryusuke Domon!!

A missile before the eyes of Ryusuke!?

Ryusuke Domon sat in the long-cherished combat group command seat at last. The first time was during the battle against Frakken’s Dimensional Submarines, and now his finger curled around the trigger of the Wave-Motion Gun. The new weapons of the Bolar Federation, a group of warp missiles, came flying toward the Planet Galman-Gamilas. If it fell, the engineering fleet headed toward Earth would also disappear. Sanada, Aihara, Bando, and others were on board.

Seeing Galman-Gamilas trying to build peace through a massive military force, Ryusuke viewed them as a threat. If the missile hit its mark, this planet would disappear–a moment’s hesitation caught Ryusuke’s heart. However, in the next instant, he watched the approaching missile through the target scope. Energy rose and the sight of the enemy grew larger still.

From behind Ryusuke, the voice of Kodai sounded, “FIRE!”

Strength entered his finger and the trigger was pulled.

A great white light! A swath of fearsome energy was concentrated on the Bolar Federation’s missile. Sweat bathed Ryusuke’s forehead as he heard the congratulatory words of Kodai: “Well done.” Then, during the communication between Kodai and Dessler, Ryusuke learned the true heart of Kodai.

“Do you begin to understand now, how dangerous it is to put too much confidence in military power?”

The heartfelt peace Kodai wished for–it was the Ryusuke’s feeling as well. He had just taken his first step as a true soldier of Yamato.

The wait until the great galactic war further intensifies! Can Yamato save the Earth!? The ship of warriors flies into darkness even now! 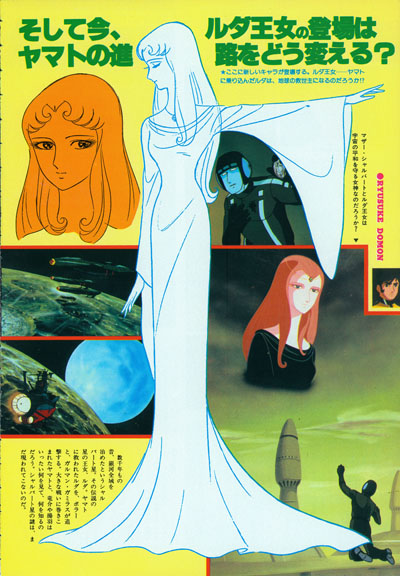 Text in the blue box:

Space Battleship Yamato III is to conclude in the first week of April? Initially, Yamato III‘s broadcast was scheduled for four arcs (52 episodes, 1 year). Now the information is that it will end with Episode 25 on April 4. The various human relationships and the appearance of Dessler which evoke the image of Series 1, along with the advent of new characters, truly feel precious.

Yamato III established events such as the abnormal growth of the sun, the great war in the galaxy, and the important point of “human drama” with Kodai, Yuki, Domon, and Ageha. It may not all be told in 25 episodes. In any case, not a single episode of Yamato III can be missed until the end. What will happen to Yamato in the rapid expansion of the story!?

How does the appearance of Princess Ruda change Yamato‘s course now?

The Planet Shalbart ruled the entire galaxy long ago, for thousands of years. Ruda is the princess of that legendary planet. Yamato saved Ruda, and is now pursued by both Bolar and Galman-Gamilas. With Yamato involved in a major fight, watch for what Ryusuke and Ageha come to know. The mystery of Planet Shalbart has not yet appeared.