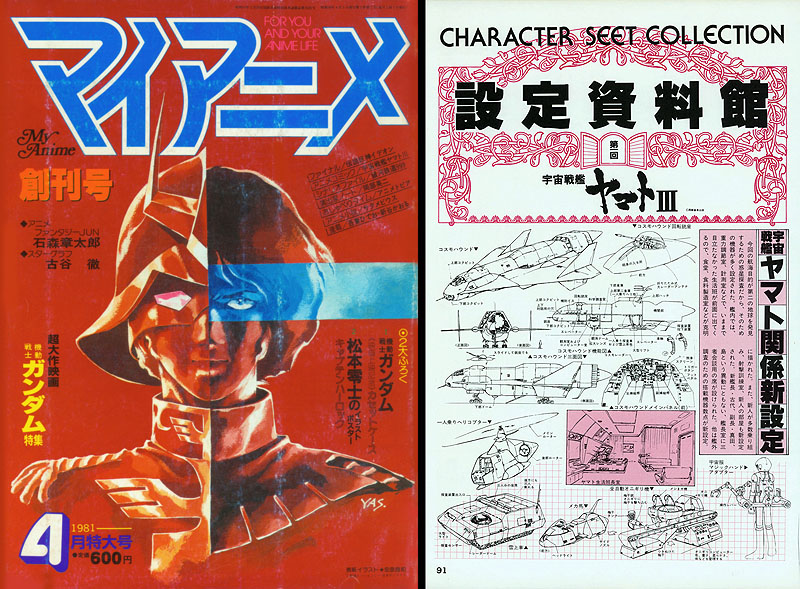 Click here for a gallery of all images from this page.

Because the purpose of the voyage is planetary exploration to discover a second Earth, a lot of equipment was designed. Within the ship, there is a gravity adjustment room and a measurement room, and since the previously-inconspicuous life group comes to the forefront, a cafeteria and food production room were elaborately drawn. Also, many rookie crew members come on board, so a new shooting/training room and newcomer’s room were set up as well. Following the change of Kodai being made captain, and Shima and Sanada as first mates, seats for tripartite meetings were added to the captain’s cabin. Additionally, several new points for loading and deploying investigation equipment were added to the ship. 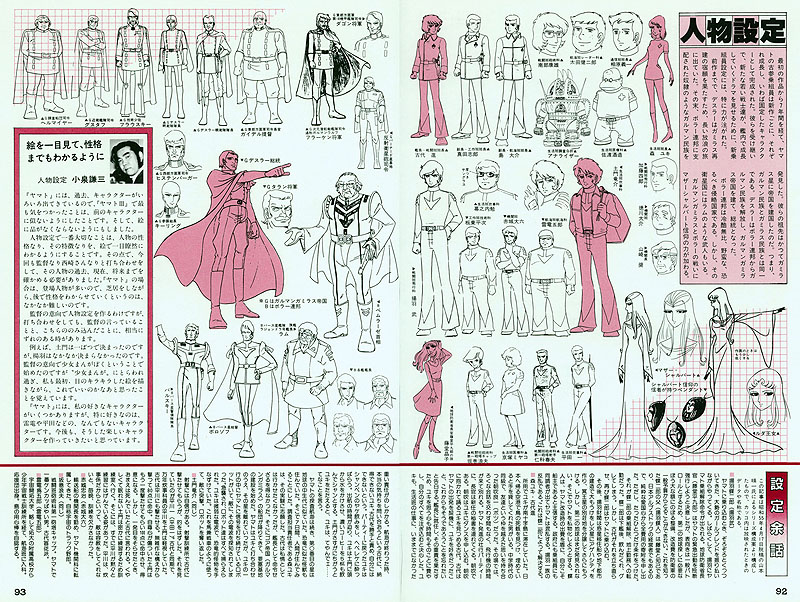 Seven years on from the first series, the senior crew of Yamato appears in every new work, growing up and being completed as fixed characters so to speak. They inherit new young soldiers, and in order to depict the drama of growing up in a warship, particular power was directed toward the design of the new crew.

In order for Dessler to achieve his cherished hope of reconstructing Gamilas from previous stories, he went on a long, wandering voyage. In the end, he discovered the Galman race being ruled over as slaves by the Bolar Federation. They are the ancestors of those who once founded the nation of Planet Gamilas. In other words, the Galman and Gamilas races are the same. Dessler set the Galman race free from the Bolar Federation, built the Galman-Gamilas Empire, and became its leader.

The Bolar Federation is a ruthless nation, unmatched in their barbarous aggression. However, a soldier like Ram comes from one of their satellite nations. And with Mother Shalbart, the power of faith joins the fight between Bolar and Galman-Gamilas. 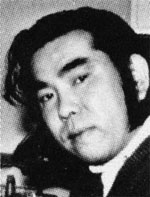 One look at the picture, and you can understand the character

Because many characters have appeared in Yamato in the past, the two things I was most conscious of for the new ones in Yamato III was to avoid resemblance to previous characters and keep the sense of elegance from being lost in the show. The most important thing in a design is to make their characteristics recognizable at a glance. It is necessary to determine a person’s past in order to ascertain their future, so I worked with Mr. Nishizaki to arrange those points.

Because there are many characters who appear in Yamato, it’s difficult to come up with ideas for new ones. Even if a character is designed to the director’s intent after a lot of discussion, there can still be considerable gaps sometimes. For example, though Domon was established easily, Ageha was not. The director’s original intention was inspired by girls’ manga, but I took that too far at first. While drawing him with glittering eyes, I remember wondering whether this was a good way to go.

I have several favorite characters in Yamato, especially Raiden and Hirata who don’t do very much. I’d like to continue making such enjoyable characters in the future. 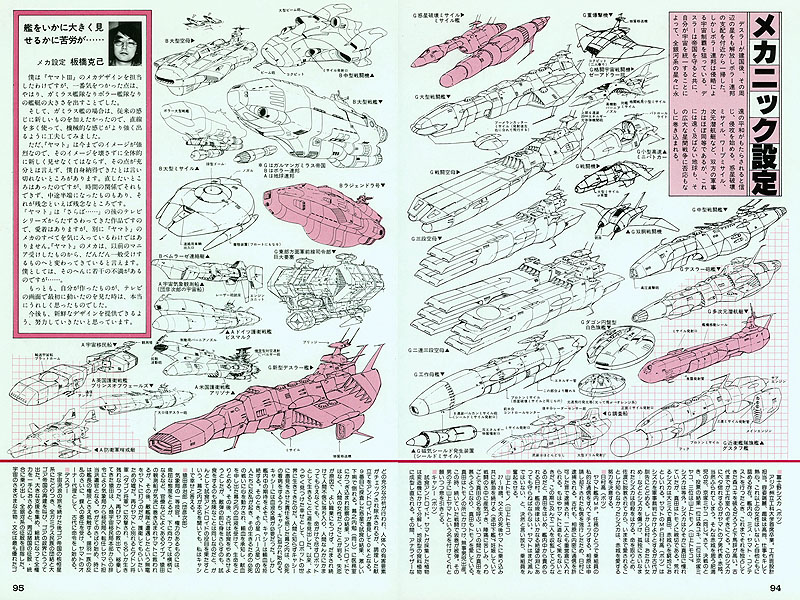 After Dessler founded his nation, he swept the Bolar Federation out and freed the neighboring star systems. However, the Bolar Federation aggressively aims for the domination of space. Dessler protects his empire and intends to unify space himself, believing that his actions will bring eternal peace to the galaxy. With such things as planet-destroyer missiles, warp missiles, and Dimensional Submarines, the military forces of both sides are nearly equal, and though Earth is some distance away, they have no say over becoming involved in the vast interstellar war. 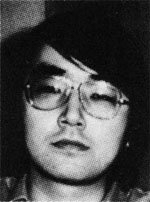 The struggle to make a ship look big…

I was in charge of the mecha design for Yamato III, but the thing I cared most about was determining the size of the vessels in the Gamilas and Bolar fleets.

In the case of the Gamilas ships, I wanted to add something new to the traditional feeling, so I used a lot of straight lines to devise a stronger mechanical feel. But because the traditional image is strong in Yamato, I had to make it look generally new without disturbing that image. I can’t make the point strongly enough that this was an area where I did not have enough self-conviction. There were many things I wanted to fix, but it wasn’t possible in the time we had, so I regret that some things were left only half done.

Although I’ve been working on Yamato since the TV series after Farewell and there is a lot of affection, I don’t like all the mecha of Yamato. Yamato mecha gradually changed from something that was once a mania into something popular with the general public. As for me, there are a few that I’m dissatisfied with, but the first time I saw something that I made move across the TV screen, I was really glad. I want to work hard to provide fresh designs in the future. 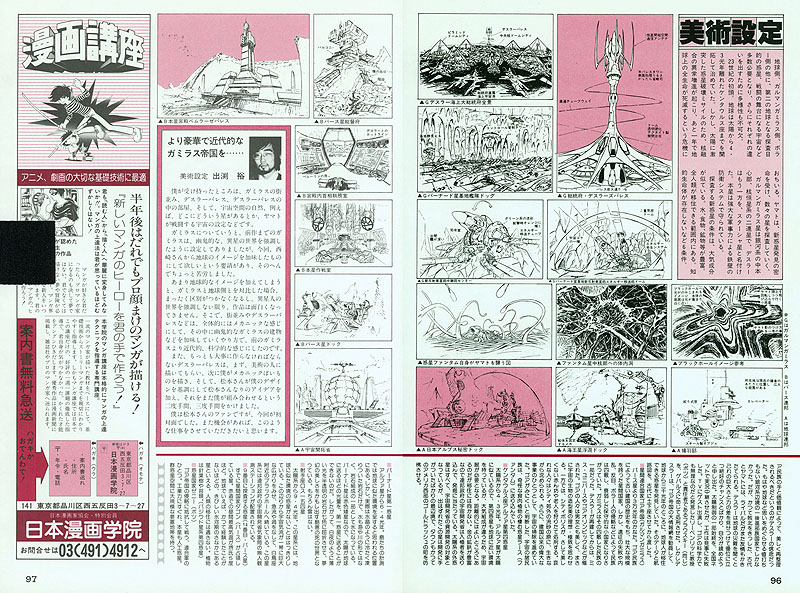 In addition to the Earth, Galman-Gamilas, and Bolar sides, the purpose of exploration is to find a planet that can become a second Earth, so many stages are needed for battles in space and diversity is essential in order to show differences.

At the beginning of the 23rd century, the Earth opened up a claim on Centaurus, 4.3 light years from the sun. However, when a planet-destroyer missile crashes into the sun, an unusual increase in nuclear fusion occurs, causing a crisis in which all life on Earth with perish in one year. Yamato receives secret orders to find and explore many new planets.

The limitations for a new planet are that the atmosphere must be similar, water, food, and minerals must be abundant, all of the human race must be able to emigrate there, and it cannot contain intelligent life. All six of these conditions must be met.

The planet Galman-Gamilas is a binary world in the solar systems at the core of the galaxy, and Dessler named the companion planet Starsha. Both planets are protected by an iron wall of powerful military forces. 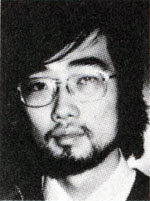 I was responsible for the cityscapes of Gamilas, Dessler’s palace and the rooms inside it, and settings in space or on planets where Yamato fights.

When talking about Gamilas, compared to the previous work I pictured it as a ghostly, alien world. But there was a request from Mr. Nishizaki to take into account the image of Earth and I struggled a little in that area. Comparing Earth to Gamilas, when I added too much of the Earth image it became indistinguishable and didn’t look alien at all, so it became less interesting. Therefore I added an overall mechanic feeling to the ghostly cityscapes and Dessler’s palace and went for a more modern, scientific feel than the original Gamilas.

Dessler’s palace had to be made carefully. At first I drew it as fine art, then drew it more mechanically, and Mr. Matsumoto added his own ideas, so the time and effort of all three tries became combined. Although I am a fan of Mr. Matsumoto, this was the first time we met. I’d like to do such work again if there is an opportunity.