Born 1933 in Kochi. After joining Aoi Studio, he worked with Tetsuya Ohashi and Matsuo Ohno on Mighty Atom [Astro Boy] (1963) to develop the art of sound effects in anime. His major works are: Arabian Nights (1969), Belladonna of Sorrow (1973), Space Battleship Yamato (1974), Doraemon: Nobita’s Dinosaur (1980), Night on the Galactic Railraod (1985), Wings of Honneamise (1987), Sazae-san, and The Footsteps of Atom (2011). He received the Lifetime Achievement Award at the 11th annual Tokyo Anime Awards.

In this corner we interview the makers of Yamato 2199. This time we talk with Mr. Kashiwabara, who was in charge of sound effects for the original Space Battleship Yamato and created various sounds that come up in 2199. We asked him for his memories about the original Yamato. 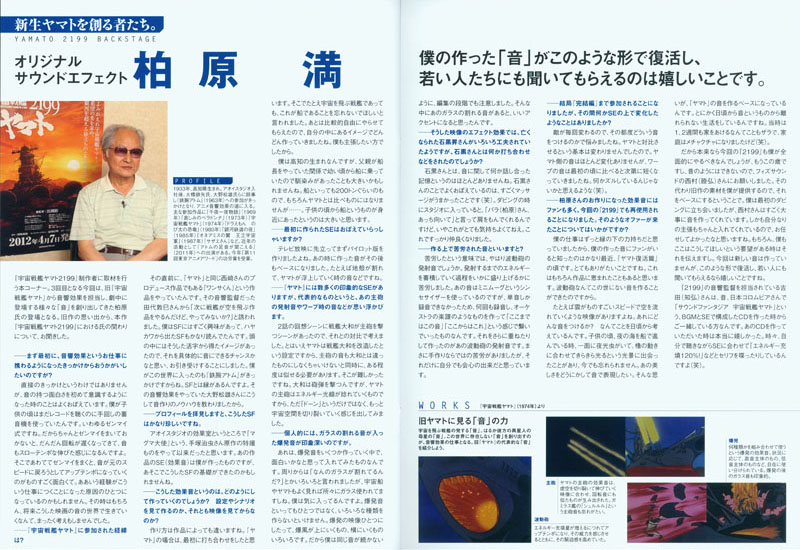 I’m glad that the sounds I made are revived in this form,
and that young people get to hear them.

Interviewer: First, I’d like to ask how you became involved in your work in sound effects.

Kashiwabara: Although it wasn’t necessarily a direct cause, I remember well when I became aware of the fun of sound for the first time. When I was a child, I listened to records on a hand-cranked phonograph. It was a so-called zenmai [windup] type. If you didn’t wind it up perfectly, the rotation became slower and slower, and the sound took on an extended tempo. Then, when the zenmai was wound up too fast, it was very interesting when the sound went up-tempo before returning to its original speed. That experience may have been one of the causes for me to get involved with such work. Of course, I didn’t think at all about spending my future in the world of movie sound.

Interviewer: How did you become involved in Space Battleship Yamato?

Kashiwabara: Just before that, I worked on Wansa-kun, which was also made by Yamato‘s producer, Mr. Nishizaki. I was invited in by Atsushi Tashiro, the sound supervisor, who said, “I’m doing a project about a flying battleship, why don’t you do it?” I’m very interested in SF, and read a lot of the SF [novels] published by Hayakawa. I had images in my head that came from the printed page, and I decided to take it on to see if I could make the sounds concrete.

Mighty Atom [Astro Boy] was the reason I had an opportunity to enter this world. There was a relationship to SF, since I gained my know-how for making sound from Mr. Matsuo Ohno who did sound effects for it.

Interviewer: When I look at your profile, there isn’t much SF in it.

Kashiwabara: I worked on Ambassador Magma in the effects room of Aoi Studio, and I ran the effects for original Osamu Tezuka works after that. The foundation of such SF was probably there.

Interviewer: How is the making of a sound effect carried out? Do you decide on it from watching a video, or read a script and make it from there?

Kashiwabara: It depends on the work. In the case of Yamato, it started with meetings. Even if it was a battleship flying in space, I was told not to forget it is a ship. I was allowed to work comparatively freely, so I did it steadily to my own image. That’s because I wanted to be the one to make decisions.

I was born in Kochi [on the southern coast of Japan], so it may be that I had greater familiarity with boats from an early age since my father was a captain. It was something like a 200-ton ship, not comparable with Yamato, but I’ve been familiar with big ships since my childhood.

Interviewer: Do you remember the first sound effect you made?

Kashiwabara: Prior to a TV broadcast, a pilot version was made. The sounds that I made for that became the basis for others afterward. For example, the breaking of the Earth’s crust when Yamato surfaces.

Interviewer: There are a lot of impressive sound effects in Yamato. The representative ones that comes to mind are the sounds of the warp and the main guns firing.

Kashiwabara: Since Episode 2 had a flashback scene in which the battleship Yamato fired its main guns, I thought about creating a sound comparable to that. But because the concept was that the battleship Yamato had been remodeled, it had to be different, so it was necessary to redesign it to some extent. That was difficult. The battleship fired a shell, but the space battleship’s main gun fires twisting beam energy, so it couldn’t just go “boom.” I tried to give it more of a feeling of cutting through space.

Interviewer: Personally, I like the sound of the glass breaking after an explosion.

Kashiwabara: While I was making explosions I tried to put something in it that I thought was interesting. Around that I asked, “would any glass get broken?” and if you look closely, glass is used in some places on the Yamato spaceship. I was happy with that. I preferred to have various explosions instead of just one. In some scenes, even if it has the image of an explosion, sometimes the blast goes upward and sometimes it goes horizontally. Therefore, I was careful in the editing stage not to continue using the same sound. I thought having the crackle of glass in that sound would be a good accent.

Interviewer: It seems that Mr. Noboru Ishiguro, who has passed away, devised visual effects in various ways. Did you have any meetings with him?

Kashiwabara: I don’t have many memories of discussing sound with Mr. Ishiguro. What I remember well about him was that he gave a very good massage. (Laughs) When I entered the studio for dubbing, he’d say, “Bara-san, over here,” and give me a good shoulder-rub. That was really nice, and we became good friends.

Interviewer: What sound was really difficult to make?

Kashiwabara: The firing of the Wave-Motion Gun gave me a lot of trouble. I had a hard time with the warmup process of building the energy before firing. I used a synthesizer called a Mini Moog, and because it was only able to make a single sound at a time, I recorded it many times and made something like an orchestral score. “This sound goes here, and this one here.” It had a feeling I could connect with. I built it up into the firing of the Wave Gun. It was difficult and uniquely handmade, so I’m quite satisfied with it.

Interviewer: You participated all the way to Final Yamato. Was a sound effect ever changed over that time?

Kashiwabara: Because the enemy changed every time, I fretted over what sounds to give them each time. That contrasted with the basis for Yamato, which did not change. There weren’t many changes in the Yamato sounds, though the warp became progressively shorter compared to the first time around. It seemed like we were cheating. (Laughs)

Interviewer: Your sound effects have a lot of fans, and many are reused in 2199. What was it like when that offer came?

Kashiwabara: I always thought my work was a thankless task, but I learned about fans of the sounds quite recently, around the time of Yamato Resurrection. I was very grateful. Of course, I thought I was blessed with this work, since I got to make sounds that were never heard before, like the Wave-Motion Gun. For example, you have a scene of clouds flowing through the sky at tremendous speed. What kind of sound is given to that? I’m always thinking about such things.

When I was a child I once went on a sea ship at night. There was [bioluminescent] noctiluca on one side, and I’ll never forget the glittering spectacle the followed the movement. I want to express that beauty with sound in some way. Such thoughts became the basis of making sounds for Yamato.

Anyway, I live a life that is inseparable from sound. It was quite common in those days to be away from home for a week or two, and everything went to pieces there. (Laughs) Therefore, though I would normally do all the work in 2199, I can’t do it like I did in the past any more, so I asked for help from Mitshiro Nishimura of Phase Sound.

Because I offered the material that was the basis of the original sounds, I was present at the first dubbing session, and Nishimura is making the sound very carefully. His ideas are put in perfectly, so I think it was good to entrust it to him. Of course, when I have a request I convey that I’d like him to do it this way here and here. I haven’t made any new sounds this time, but the sounds I made are revived in this form, and I’m glad that young people get to here them.

Mr. Tomohiro Yoshida is the sound supervisor of 2199. A long time ago, he was the sound editor for a CD from Nippon Columbia called Space Battleship Yamato Sound Fantasia. I worked with him to configure the music and sound effects to make that CD. I was really glad to work on it. Sometimes I listen to the sound effects on my own, and say the lines; “energy at 120%!” (Laughs)

The original Yamato has the power of “sound,” such as the “sound” heard from a flying space battleship, or the “sound” of a distant alien planet. It is the work of sound effects to create a “sound” that does not exist in this world. Here are some representative “sounds” of the original Yamato.

The sound of Yamato‘s main guns matches the scenes of them cutting through space, so something like a rotational sound was produced. The main gun sounds of the Gamilas ships is unforgettable, too.

As the energy level increases, it goes up-tempo, expressing the feeling of power and rising tension.

Various explosion sounds are used in combination. Depending on the situation, it may need a high-pitched tone, or a low-pitched tone used appropriately. The glass-breaking sound after the explosion is impressive, too.