Matsumoto anime showed the unique appeal of mechanic at an abundant level.
It also gave us great battle scenes in the ocean of space for the first time. 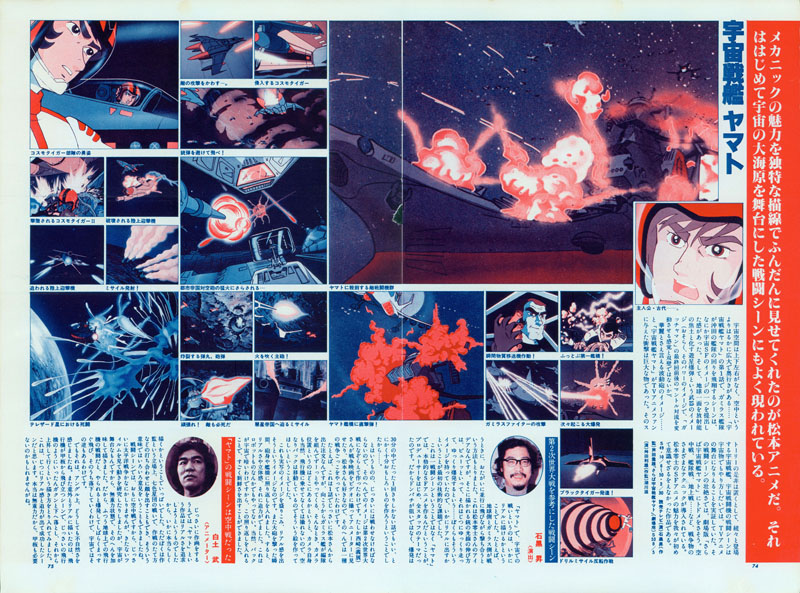 Space has no up or down, no left or right, and has vast depth rather than air…in the scene of the Gamilas fleet surrounding Okita’s fleet in the first episode of Space Battleship Yamato, there was the feeling of someone submitting an image of space SF. Then there was the image of a planetary bomb that reduced the entire surface of Earth to radioactive ash. Perhaps the image was as powerful as the mantle of destruction in the final episodes of Gatchaman.

[Translator’s note: In the storyline, there was a great plan called the “Mantle Project,” that used mantle convection to generate electric power. Galacter tried to abuse it, throwing nuclear bombs into the mantle current to destroy the earth. See Gatchaman episode #100 and read an extensive episode guide here.)

The image of the wave-motion gun could be called brilliant. The impact of Space Battleship Yamato on TV anime fans was huge. The pros and cons of a story about a battleship in space came up one after the other. Even the battle scenes with space fighters demonstrated how space could be a stage for TV anime.

The fierce battle scenes of Farewell to Yamato delivered a magnificent blow in theaters. Aerial dogfights, fleet wars, ground wars–various war techniques were introduced. It was the work that brought the appeal of Leiji Matsumoto SF anime to our consciousness for the first time. 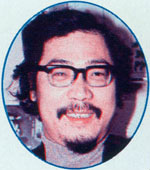 In Yamato we talked about how to present a real battle in space. For example, when the Gamilas side fights against the Earth side, I was against the method of them fighting a gun battle while flying in parallel with each other. It was Leiji Matsumoto’s idea that the light of a ray gun would travel slowly, and explosions would occur slowly. Since we all had such an image, making it look real was the first technical subject. It wasn’t for a battle scene, but for the entire show. We made Yamato as a genuine SF anime. That was the theme held by everyone on the staff, including the producer.

That said, we had to actually take on the battle portion, and the image in this area was an analogy to World War II. Certainly, Mr. Nishizaki showed war movies to the animators, and Mr. Matsumoto also liked playing soldier in a way. For example, he ordered us to do a scene with Gamilas ships flying in formation which would have been impossible to shoot unless the camera was mounted on an aircraft. The background of the scene had to continuously move. He asked us to make such shots, like an image from a live-action movie with a very realistic feeling.

Also, I added a glare on the bridge and gun barrel at the moment the cannon fired. It gave the force of a realistic three-dimensional impression. This doesn’t happen in robot-things. Of course, because the background is all dark space, showing this glare gave it remarkable freshness. 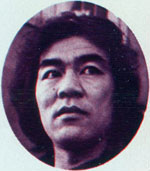 The battle scenes of Yamato were aerial dogfights

In drawing the art for Yamato, we tried to pursue reality and the work was full of art that tried to appear real. I was in the position of supervising production on the Battle of the Rainbow Star Group, so I attended meetings on how to build strategy and such, and I was able to give various opinions. Because the battle scenes were mainly aerial combat and I didn’t really know about World War II, I studied movement from watching scratchy film.

Because space is a weightless environment, I took that into account when drawing it. I mean, in air combat on Earth, an aircraft explodes when it gets hit, and it may keep flying for a while before it falls. In space it might rise up, but that angle felt really unnatural. Also, in scenes where a plane takes off from a deck, a real airplane drops downward with a jerk, so I tried to adopt that and show it rising up. I think that scene succeeded in giving a real and powerful impression. But the truth is that because of weightlessness, you might not need a deck.

Special thanks to Tsuneo Tateno for translation support.