Special Message from Chairman Nishizaki to everyone in the fan club

Also, a new journey has begun! 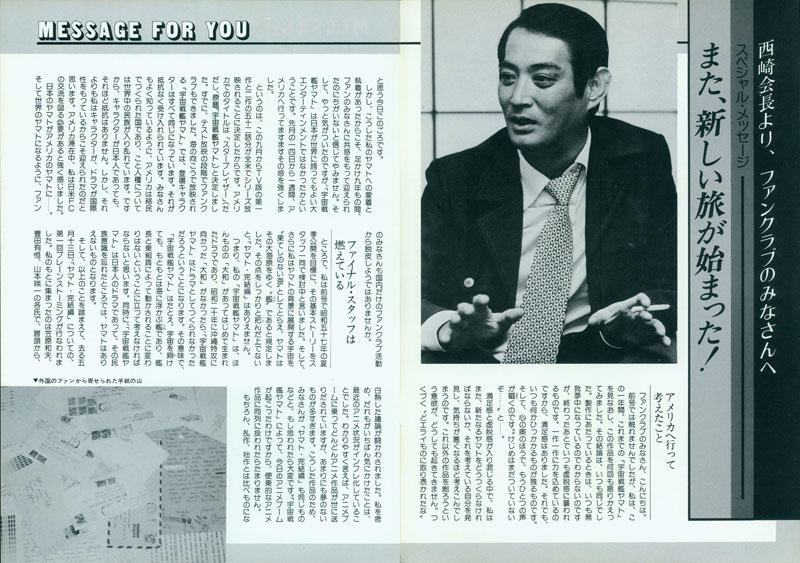 The thought of going to America

Hello, everyone in the fan club. I didn’t mention this last issue, but I’ve rewached the original Space Battleship Yamato over the past year and reflected upon it a lot. My conclusion was always the same. When in the midst of a production I don’t realize it because I am always frantic, but when I finish there is always an attack of despondency. Since I can put so much energy into a work, there is a sense of satisfaction.

Still, something caught always remains. Then, a voice whispers again from the back of my mind: “You aren’t fulfilling your responsibility yet…”

In a mixture of satisfaction of lethargy, I find I’m thinking about how I should make a new Yamato again, and it traps me in unpleasant thoughts. I cannot have the desire to create other works. “I’m haunted by a great nuisance.” I get utterly disgusted with myself lately.

However, it is precisely because of my deep attachment to Yamato over these last nine years that I earnestly believe that it must have been met with the sympathy of all the fans. And at last, I noticed that Space Battleship Yamato is world-class entertainment that Japan can be proud of.

A fan club was already founded during the stage of test-broadcasting, too. When Space Battleship Yamato is aired across the sea, all the characters look the same. It was accepted without resistance. As you know well, America is a country made of immigrants with the mixing of many races and ethnicities. So even if a character is Japanese, there is no resistance.

However, rather than for the characters, I think it was accepted simply because the story has an international nature. During my stay in America, I strongly felt that it was a necessary aid to promote exchange between Japanese and US fan clubs. The Yamato of Japan is the Yamato of America. And as it becomes the Yamato of the world, everyone can transform the activities of their local fan club.

[Translator’s note: since this essay was published in the summer of 1981 and Star Blazers first went on the air in fall ’79, the particulars of Nishizaki’s account are questionable. It may be that Star Blazers was considered a test-market program for its first two years, but that seems at odds with a debut in nationwide syndication.]

By the way, my goal is to release the final story in the summer of 1982, and everyone on the staff is thinking about the foundations of the story. Outer space, which expands as the backdrop of Yamato, is seen as an “endless ocean,” and Yamato is defined as a “ship” that travels that ocean. Unless that point is not made firmly, then there could be no Yamato The Final Chapter.

Based on the above, the first brainstorming for The Final Chapter was performed on May 13. Kazuo Kasahara, Aritsune Toyota, and Eichi Yamamoto all gathered with me, and a heated debate started right from the beginning. Everyone, especially me, was most worried about the inflated status of recent anime. Putting it plainly, although the anime boom has quickly sent a lot of anime out into the world, too many of them do not have a dream. I don’t want people to think The Final Chapter is also dreamless because of that. Since today’s anime boom happened because of Space Battleship Yamato, it would be unbearable for it to be considered another “piggyback” anime work. 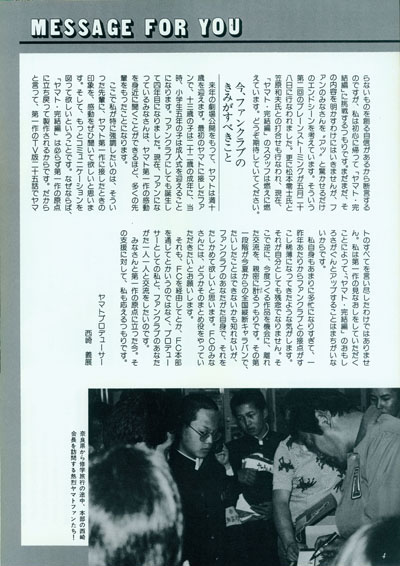 For this production, of course, because I am determined to make something beyond compare, I’m going to challenge The Final Chapter to try and go back to basics. I can’t reveal the content, but I’m thinking about an end scene that will amaze all the fans.

The second brainstorming occurred on May 28. A meeting with Leiji Matsumoto and Kazuo Kasahara was also carried out. The staff of Yamato The Final Chapter is now simmering. Please look forward to it.

What you of the fan club should do now

With the theater exhibition next year, Yamato will be ten years old. The 13-year old fans first touched by Yamato will reach the adult age of 22. The children who were 5th graders in those days will greet their coming-of-age ceremony.

The fan club was born in the fourth year. There are many seniors among the present-day fans who can closely sense the impression made by the original work of Yamato. What I especially emphasize to those seniors is that I want to hear your impressions of your first contact with Yamato. That is, I would like you to communicate more.

I’ve been very busy myself, and I feel that my point of contact with the fan club has become a bit thin over the last two years or so. I truly regret this. Therefore, I plan to conversely take advantage of this work by closely watching the interchange this time. In its first stage, a campaign caravan will travel across Japan starting this summer. I’m afraid that I’m not much of a host to you, but I’d like you to meet others in the fan club yourself. 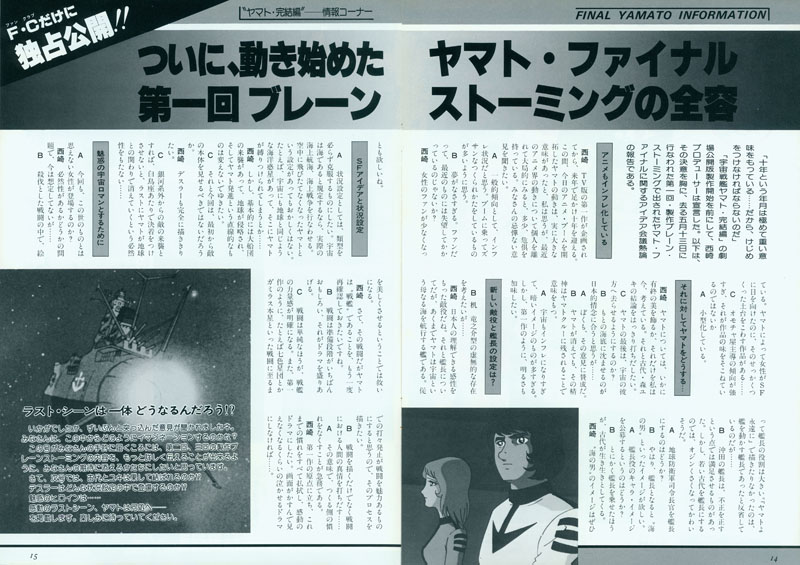 An exclusive only for the fan club!! Final Yamato Information Corner

“A period of ten years has a very heavy meaning–therefore, it must be distinctive,” declared Producer Nishizaki before the start of production for the feature film Space Battleship Yamato/The Final Chapter. The heartfelt determination that follows is a report of the passionate first idea meeting for Final Yamato, a production brainstorming session held on May 13.

[Translator’s note: the individuals indicated here as A, B, and C were in actuality three writers. Aritsune Toyota and Eiichi Yamamoto had both been associated with Yamato since the very beginning, and Kazuo Kasahara was a very accomplished live-action screenwriter who was joining the staff for the first time. For whatever reason, the text of this article didn’t specify which of them was A, B, or C.]

Nishizaki: By the end of next year, it will be almost a decade since planning started for the first TV series. During that time, the movement of Yamato pioneered the anime boom of today, which I think it gives it great meaning. As an individual looking at the big picture of the recent world of anime, I have some misgivings. I’d like to hear everyone’s honest opinion.

A: As a general trend, I think we have a situation of inflation. I think that many sloppy things have been created by people riding the boom.

B: It is hopeless. Haven’t even the fans become disappointed by the latest things?

Nishizaki: Female fans have decreased. Although women looked to SF because of Yamato, some works have broken the foundation that was built with much effort…

C: The trend of toys leading the way is too strong, and can spoil the taste of the work.

A: It is cheapening it.

What to do with Yamato…

Nishizaki: I’ve been thinking about how to bring Yamato to a successful conclusion now. Along with that, I want to clearly set out a conclusion for Kodai and Yuki.

C: Is the end of Yamato to drift off into infinite space?

B: I think it would fit a more Japanese-style feeling to sink down to the seabed.

A: I agree with that opinion.

B: Even if Yamato disappears, it is meaningful for its spirit to survive in the Yamato crew.

A: Space has also become too inflated, and too full of dark images. However, I’d also like to add the brightness of the original work.

Concept for the captain and the new villain?

B: I like to think about the nihilistic existence of a Ryunosuke Tsukue type…

Nishizaki: It is a villain’s part with a sensibility that can be understood by the Japanese. Although Yamato has a captain, it is a ship navigating the mother ocean called space to the end. Therefore, the role of the captain is huge. It was not shown enough in Be Forever, though we reflected that it is the captain who moves the ship…

B: The point of Captain Okita correcting an injustice was satisfying. However, when young Kodai was made into a captain he became a fuddy-duddy, which was pitiful.

A: What about the commander of the Earth Defense Forces?

B: After all, when it comes to the captain of a ship, I want the image of a “Man of the Sea.”

A: Could we ask about the public perception of a character image with the role of captain?

B: Anyway, as far as ship captains go, Kodai is lively.

Nishizaki: I want the image of a “Man of the Sea” by all means.

A: I want a concept that is sure to overcome stereotypes. If we specify that space is the sea, then an actual sea voyage and sea war must be performed. Maybe there is a possibility that Yamato could lose its ability to fly. For example, there is an ocean planet in space similar to Earth, and Yamato is bound to it…

Nishizaki: However, there is basically a large fleet attack and Earth is invaded. I don’t want to change the straight line of Yamato‘s launch.

C: This time, shouldn’t we show the main body of the enemy from the beginning?

Nishizaki: I also want to give a complete portrait of Dessler.

C: If the enemy invades from outside the galaxy, they would have to take on a decisive battle around Cygnus. Yamato wouldn’t necessarily have to disappear in relation to the Earth in the end.

The fascination with Space Roman[ce]

A: Would an out-of-this world woman appear again this time?

Nishizaki: I haven’t thought about whether or not it’s necessary…

B: It helps bring a beautiful image to a bloody battle.

Nishizaki: By the way, I’d like to reaffirm once again that Yamato goes to battle as a “battleship.”

B: In a battle, the buildup phase is most interesting and raises the drama.

C: In a simple battle, the ability of a battleship becomes self-evident. Also, as in the first series for example, I think setting a battle against something like the Rainbow Star Cluster or Planet Gamilas makes it more attractive. I want to show that process.

B: And not just show a battle, but also hit on the true human feelings in the battle…

A: Meaning that as creators we need to wipe out negligence from force of habit, as soon as possible.

Nishizaki: I want to make a story with a deep impression that clears away all the familiar trends and stands on the origin of the original work. It has to be a story that leaves you crying as the screen dims.

What will happen in the last scene!?

Your opinion on this is something that should be heard. How does everyone imagine it? By the time this issue reaches you, the second and third brainstorming sessions will have happened. We’ll bring you more detailed information that meets your expectations. In the meantime, Kodai and Yuki get married next issue!? In what kind of situation does Dessler appear!? A fascinating heroine…the impression of the last scene of Yamato will be published. Please look forward to it.