Exclusive report only for Yamato fan club! One veil after another removed from “Yamato final chapter”

Existence of the enemy? What of Kodai? Dessler…?

A new Yamato is about to be born. 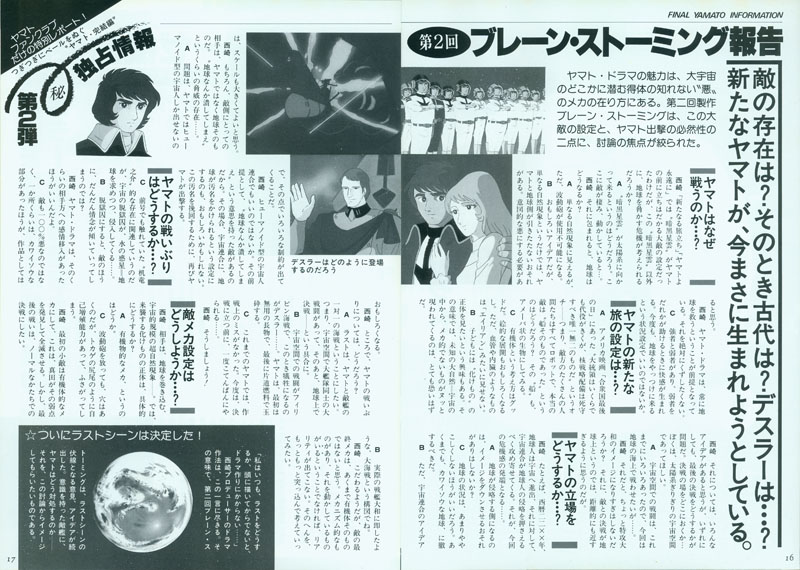 One appeal of Yamato stories is the form of “evil” mecha hiding somewhere in the universe. The second production brainstorming session deals with the concept of this powerful enemy. The focus of the discussion was narrowed down to two inevitable parts of Yamato‘s mission.

Why does Yamato fight…?

Nishizaki: In The New Voyage and Be Forever Yamato, the “Dark Nebula” was the setting of the powerful enemy who stood in the way of Yamato. Beyond this “Dark Nebula,” what crisis could conceivably threaten the Earth?

A: It could be the “Dark Nebula” coming to our solar system. If the enemy is living and operating here…

Nishizaki: What would happen to the Earth if it was wrapped into it?

A: Although it appears to be just a natural phenomenon, the Wave-Motion Gun would be useless.

B: It’s an interesting idea, but if it’s only called a natural phenomena, there is the possibility that Earth and Yamato will not look good. I think there needs to be a deliberate evil.

Nishizaki: The premise is always that Yamato saves the Earth. I absolutely don’t want to break that.

C: There are strong people and weak people, and great pleasure comes from someone helping the weak. The concept of coming to defeat the Earth could be good once again.

The concept of a new journey for Yamato is…?

A: There’s an American movie called Twilight’s Last Gleaming that says, “no matter who the president is, the deployment of nuclear strategy is something unique that must be defended.” Along that point, how about if the enemy of human beings is robots, and the real enemy is “the ship itself?” The “ship” could be an amoeba-like organism.

C: An organism is a good idea. The visual development would be interesting. However, it shouldn’t look like blood vessels and internal organs, as in Alien.

B: For children, there is an interest in wanting to see the true form of a “monster.” In the sense that nature equals unknown space, a mecha that appears should be very scary.

Nishizaki: I think there are many ideas there, but the problem is what we do with the last decisive battle. Or…where to put the decisive battle. I’d like it to be outer space at the edge of the solar system.

A: Because there have been various battles in space up to now, I want to make it a battle on the sea of Earth this time…

Nishizaki: But then wouldn’t it seem a little too much like the image of the Battleship Yamato‘s suicide? Also, I think if the decisive battle with the enemy happens on Earth, it seems too close.

What to do with the position of Yamato…?

Nishizaki: For example, Earthlings move into space in the year 22XX, a space federation could close in to suppress the invasion of humans. That would begin a sense of crisis…

A: Would that lead to an image of Earth being invaded?

C: The situation of Earth should not be too complicated. In the end, you have to buy the idea of sympathizing with poor little Earth.

B: However, I think the idea of a space federation would have a big scale.

Nishizaki: Of course, the enemy’s opponent is not Yamato, but Earth itself. The threat is, “I will crush the Earth…”

A: Since only a humanoid-type alien can pose a problem for Yamato, that point causes various restrictions.

Nishizaki: It’s all right if the people of the space federation are humanoid. Because the premise is that the enemy’s intention is to “crush the Earth,” it may be interesting to say that Earth is some kind of disgrace. Yamato‘s mission could be to redeem this disgrace.

What to do with Yamato in battle this time…?

C: Along the lines of a Ryunosuke Tsukue type, which I mentioned last time, escaped prisoners from space seek Earth, the water planet, and invade…

B: Wouldn’t an escaped prisoner’s emotions gradually lean toward an enemy?

Nishizaki: It’s better in a Yamato story to have empathy for the opponent.

C: Also, an enemy isn’t necessarily 100% evil. If you can feel sorry for them in at least one area, it makes the story that much more interesting.

Nishizaki: By the way, how would Yamato fight this time?

A: I’d like to make the last battle a one-on-one fight between Yamato and an enemy ship. That is, there is a large battle with a grand fleet in space, and a situation on Earth–a decisive battle.

B: The battle in space could be like the Battle of the Phillippines with Dessler as the victim this time. Yamato is a useless thing at first, and finally dies an honorable death with one-way fuel.

C: In Yamato up to now, there was no mistake in the strategy. Before the decisive battle this time, it could be damaged…

Nishizaki: Let’s do so!

How about the enemy mecha design…?

Nishizaki: The opponent is a supernatural phenomenon of space that involves the Earth. So what’s the specific form of the thing that attacks?

A: How about an organic-matter-like mecha?

C: Even if you blow a hole in it with the Wave-Motion Gun, it has the ability to self-propagate like a lizard’s tail and close up again.

Nishizaki: The first small enemy uses an organic mecha, and Sanada discovers its weak point and anihilates it. However, I want the last battle to be in a more normal form.

B: I like the notion of it being a sea battle based on the actual battleship Yamato.

Nishizaki: It seems set that the enemy’s last mecha is not an organism. There is a thing with mecha, that unless there’s something running it, reality doesn’t come out. I’d like to explore that area some more and get some thoughts on it.

The last scene is finally determined!

“I always think of the last scene, and until I can picture it in my head, I don’t make the story…” The story traits of Producer Nishizaki come down to this one word. In this meaning, the ideas foreshadowing the last scene appear one after another in this second brainstorming. How does Yamato cope with an enemy ship with consciousness–the discussion is carried out from this image. 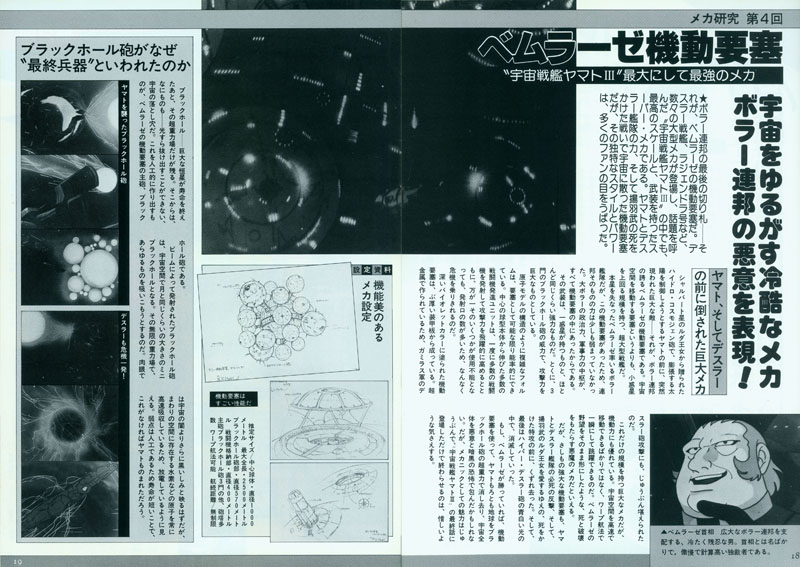 The biggest and most powerful Yamato III mecha

It expresses the malice of the Bolar Federation!

The Bolar Federation’s trump card is the mobile fortress of Bemlayze. Many large-scale mecha appeared, such as Dessler’s battleship and Legendra, but this armed super-mecha is the greatest in Yamato III. But for all the power of Yamato and Dessler’s fleet, it was the death of Takeshi Ageha that scattered the fortress into space. Its unique style and power fascinated many fans.

Before Yamato could try to control the expanding sun with the Hydro Cosmogen cannon, a gift from Princess Ruda of Planet Shalbart, a giant enemy suddenly appeared–the mobile fortress of Bemlayze, pride of the Bolar Federation. Rather than a fortress that moves through space, it’s a super-sized battleship with a scale greater than an asteroid. Although Bemlayze lost the home planet of Bolar, the power of the federation was not weakened in the slightest because he still had this mobile fortress. After all, the nucleus of Bolar’s great political and military power resided within it.

Its armaments are about as powerful as those of an entire planet. In particular, its three-gate black hole gun has huge offensive capability. Its complex form, similar to the structure of an atomic model, makes it as efficient a fortress as possible. There is a large number of fighter launch ports along the main body of the central globe, so its offensive ability can be drastically increased by the launch of many at a time. There are also many firing ports, so that if by chance any become unusable, it can easily survive a crisis.

The mobile fortress’ thick armor plates are painted in a deep violet color. Because it is made of super-metal, it can stand up to attack from a Dessler Gun or Gamilas forces. For a mecha this size, it has excellent mobility, traveling not only at high speed through normal space, but also instant warping.

Made by the ambition of Bemlayze, it can be called a demonic mecha that brings death and destruction. But even despite the desperate counterattack of Yamato and Dessler’s fleet, this powerful mobile fortress crumbled against the suicide attack of Takeshi Ageha out of his love for Princess Ruda, and the last parts finally vanished in the pale light of the Hyper Dessler Gun.

Had Bemlayze won the battle, his mobile fortress would have erased Yamato and the Earth itself with the supergravity of the black hole gun, possibly wrapping all of space in malice and fear. However, as appealing as this mecha may be, it seems regrettable that it only appeared in the last episode of Yamato III. 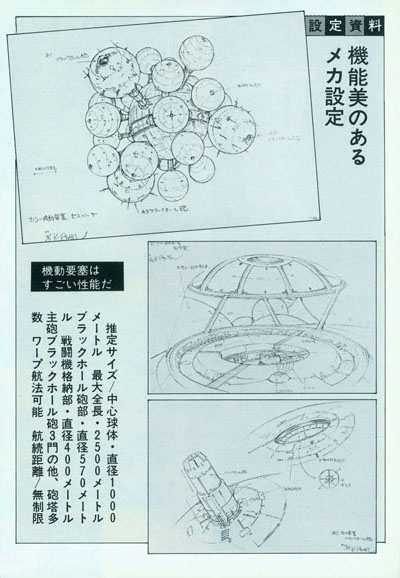 Why the Black Hole Gun can be called the “ultimate weapon”

After a fixed star’s life ends, it collapses into a black hole, leaving only a super-gravitational field. Nothing can escape from this trap, not even light. The weapon that can produce this effect artificially is the Black Hole Gun of Bemlayze’s mobile fortress. Fired by a beam, it produces a mini black hole about the same size as Earth’s moon. Its infinite gravitational field tries to inhale everything. To the naked eye, it appears as a stain blacker than the darkness of space, it seems to discharge electricity because it absorbs atoms at high speed, such as hydrogen present in the surrounding space. Its weak point is that its life is short because it is artificial, and even Yamato would have been swallowed up if not for this.