When an enemy comes, Yamato goes–this is the simplest of all Yamato stories. The third brainstorming discussion thoroughly concentrates on this pursuit. [Translator’s note: the session documented here took place June 5, 1981] 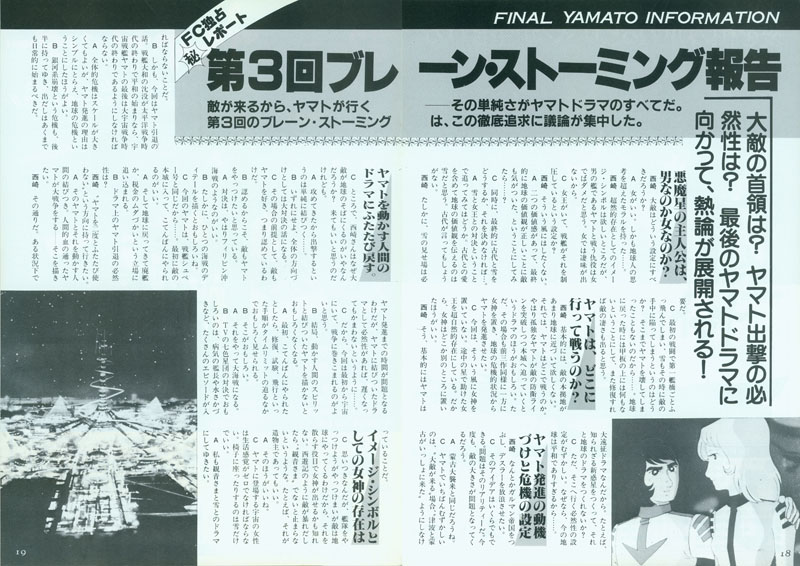 The leader of the powerful enemy? The natural core of Yamato‘s mission?

Is the leader of the demonic planet a man or a woman?

Nishizaki: What kind of setting should be made for the powerful enemy?

A: A woman is good. And a moral code thought to be superior to Earth’s…

Nishizaki: We need a supernatural image, but I think the enemy fighting Yamato would be a man’s warship. A woman would be no use in that role, because a woman doesn’t exude fear.

C: Could there be a queen, with a battleship bringing her under control?

Nishizaki: I don’t want to go that way.

A: There is a sense of two value systems, and eventually the enemy notices that the Earth’s sense of values is the right one. Could we try that…?

C: At the same time, we have to decide what to finally do with Kodai and Yuki.

A: How about later on we see a confrontation between Yuki and a queen? I that Yuki would convey the Earth’s sense of values, including love with Kodai. It wouldn’t help for Kodai to say it.

Nishizaki: A high point for Yuki is certainly needed.

C: How about, every part of the first bridge is blown away in the first battle, and Yuki falls into the hands of the enemy at that time? Because Yamato is not destroyed there, it returns to Earth with nothing on the top deck, and I think the ferocity of the enemy would be felt if it has to be rebuilt.

Where does Yamato go to fight?

Nishizaki: Basically, I don’t want the stronghold of the enemy to come close to Earth. So where does Yamato go to fight? The story is more interesting if Yamato has to go out alone and break through the enemy’s defense line. But in that case I’d employ a goddess like in the previous three works, and have Yamato launch because of a crisis of the Earth.

C: I wouldn’t use a goddess that way this time. The queen who helps the intermediate planets is a supernatural being, so it’s better to put the goddess somewhere else.

Nishizaki: Okay, since Yamato is basically a big expedition story. For instance, the story could be about new, unknown planets rather than the Earth?

C: However, establishing the need to go there is difficult. Because the present Earth is too peaceful…

Motivation of the crisis for Yamato‘s launch

Nishizaki: We could somehow exterminate the Galman Empire and set Dessler off to wander.

C: There are as many ideas as one likes. The problem is reality. The size of the enemy will be the problem this time.

A: It would be the same size as the Mongolian conquest.

C: The part that is most difficult in Yamato is the case of, “a powerful enemy comes.” It has to be like, “Mongolia and a tsunami come together.”

A: The overall crisis may be on a large scale, but the reason for Yamato‘s launch is simple; it’s best to use a crisis of the Earth.

B: It also has the crisis of galaxy collapse in the second half, so the beginning should be routine.

Returning to the story of those who move Yamato

C: By the way, Mr. Nishizaki, why don’t you like the idea of the enemy coming close to Earth? Much as I think, “bring it on!”

A: It’s a simple matter to go on a mission after being attacked…

B: In any case, the overall orientation is about building to a large confrontation.

C: As a premise in this case, the enemy also admire Yamato. In short, they acknowledge it.

B: The enemy also wants to defeat Yamato precisely because this is recognized.

A: A confrontation like the Battle of the Philippines is still good.

B: Indeed, it would surely be interesting to present the details of an actual naval battle.

C: This time, Yamato is like the cruiser Admiral Graff Spee…it starts off entering the enemy’s main fortress and gets beaten ragged.

A: And it returns to Earth to be put into a corner as a waste of taxes, and forced into decommission.

B: The story is the inevitability of Yamato‘s retirement?

Nishizaki: “Yamato will never be used again.” I want to go in that direction.

A: Yamato is moved by the cooperation of human beings. I’d like to show what the flesh-and-blood human side of Yamato does in a great war.

Nishizaki: That’s right. The time until Yamato‘s launch poses a problem under certain circumstances, but if the story tied to Yamato is one of inevitability, it may become late…

C: Therefore, I think this time we should be in space from the beginning, and involved in a war.

B: After all, it’s less interesting when we don’t show Yamato being moved by the human spirit.

A: Suppose it is damaged at first, gets examined and restored, then the flight procedure is shown interestingly while the time limit approaches.

B: That is interesting.

A: It is done and leads to a big sea battle.

B: What made the showdown in the Rainbow Star Cluster so much fun in the TV show was the sick captain and the farewell cups of water and such, which is in lots of episodes.

Existence of the goddess as a symbol

C: Come to think of it, if an enemy fleet is coming to Earth that you have to destroy but cannot, a goddess could appear to scatter it. Like in the old classic, Journey to the West, when an enemy lashes out, unless you have Kannon appear, you won’t stop them. For example, it may be the creator.

[Kannon (from Buddhism): god or goddess of mercy]

C: As for the women of space that appeared on Yamato, the feeling of life must be zero. Yuki only gets to sit in a chair.

A: I’d like to do a story of Kannon and Yuki.