December 2012 was one of those “breather” months in terms of promotional activity for Yamato 2199, though it was undoubtedly a back-breaker for the animation staff since they had to complete episodes 11-14 in time for the January 12 premiere. But for fans, each new development pushed things closer to that date and there was more to talk about as the month advanced. Let’s make the rounds… 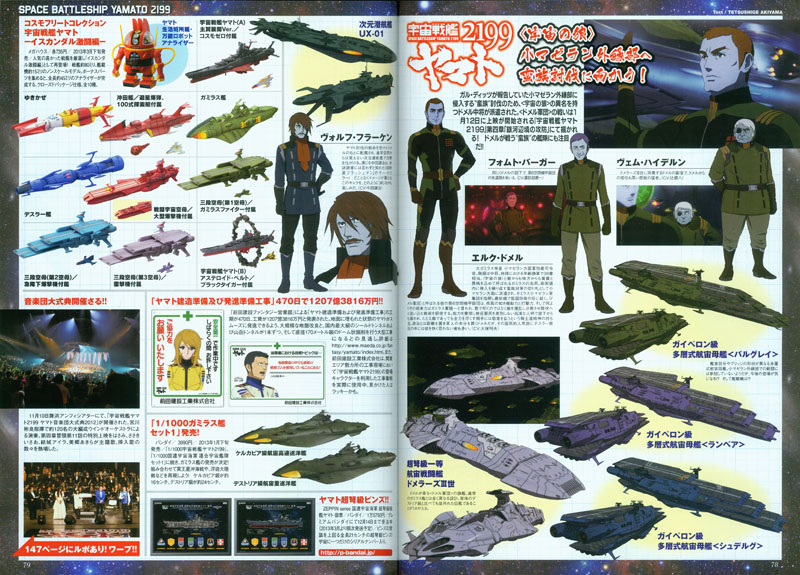 This issue of Hyper Hobby (with a January cover date) included another 2-page roundup of new character and mecha art from the official website, accompanied by product and event news. A forthcoming product from Megahouse is shown on the page above left: the Space Battleship Yamato Cosmofleet Collection/Iscandar battle chapter. It consists of previous Cosmofleet miniatures repackaged in a new set. The difference this time is that each ship will come with an Analyzer part; collect the whole set and your IQ will add up to 9. The set is scheduled for March release.

Anime World Star has created some unusual Yamato products over the past few years, and their relationship with 2199 started with Kodai & Yuki bookmarks that were part of the Chapter 2 goods collection. The set continues with bookmarks 3-6 and will probably go on in the future.

This large-format (10″ x 14″) 32-page publication first appeared at special events in late September during the runup to Chapter 3. As of December 10 it went into general release through such sources as Yamato Crew and Amazon.jp.

Despite the low page count, it’s loaded with animation layouts from the first few episodes that showcase the phenomenal amount of detail that goes into the mecha, almost all of it hand-drawn. This is the first dedicated art book to the series (as opposed to what we’ve seen in program books and magazine articles), hopefully with many more to come. 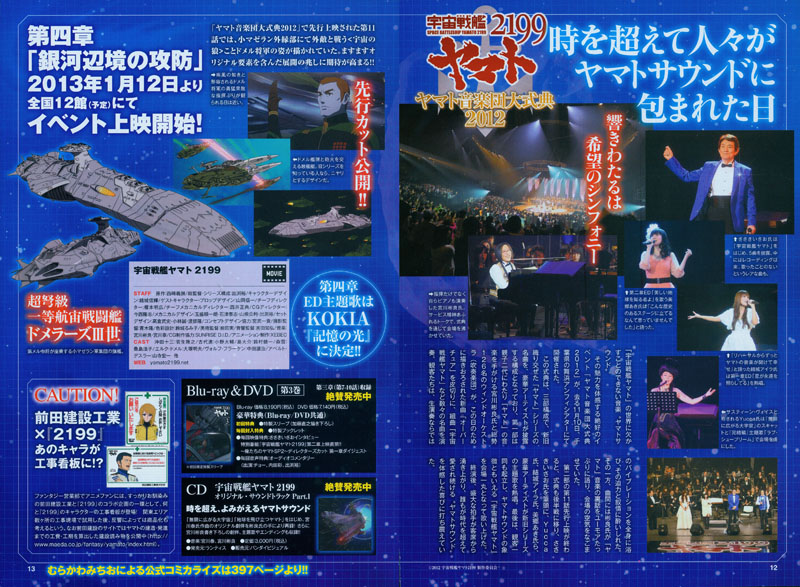 Kadokawa Publishing brought out Chapter 10 of Michio Murakawa’s Yamato 2199 manga adaptation in this issue, which reaches the end of Episode 4 and concludes Part 2 of the manga. Episodes 3 and 4 will fill up volume 2 of the paperback edition, which was announced for publication on January 10. An announcement at the end of this manga chapter indicated that 2199 would skip an issue, and resume with Part 3 (Episode 5) in issue #17. If all those numbers are making your head spin, imagine me having to type them.

See all the pages from manga chapter 10 here.

Issue 16 also featured Ryusuke Hikawa’s sixth Yamato Lessons from the Past column, which can be read here.

Despite the Gundam cover, this issue of GMDX contained another helping of its stellar 2199 coverage in a 10 page article that threw a spotlight on the Gamilas mecha coming up in Chapter 4 and also introduced us to someone we haven’t heard from before: mecha concept coordinator Satoshi Koizumi. See all the pages and read the interview with him here.

This issue also marked an anniversary: GMDX was the first magazine to begin coverage of 2199 one year earlier in issue #19. Their brief article ended with this line: This magazine intends to actively take up Space Battleship Yamato 2199 with the next issue. Don’t miss it! And with each issue since then, they’ve made good on that promise. The only thing they could do better is publish more often than quarterly. 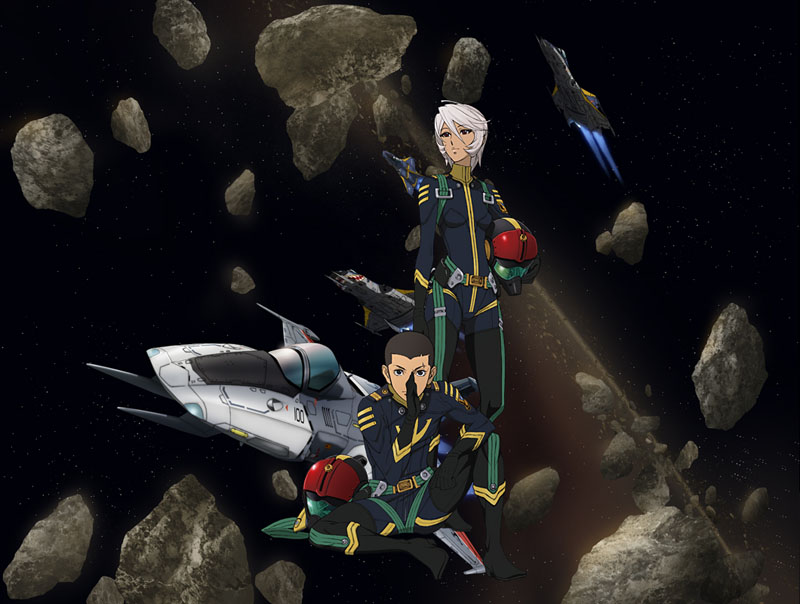 After a longer-than-usual wait, the trailer for 2199 Chapter 4 finally spread out across the internet on this day. The Twitter feed on the official website had announced a couple days earlier that the 2-minute piece had finally been approved by Director Yutaka Izubuchi and would appear soon. The artwork shown above filled up the homepage of the official website to mark its arrival.

See the trailer on the Yamato Crew site here, or on YouTube here. 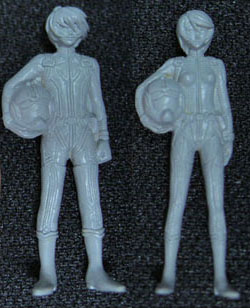 Bandai’s plan for a new Cosmo Zero model was tipped off during the summer hobby shows, and they made good on it sooner than most people expected when they announced TWO Cosmo Zero kits, both in 1/72 scale. Alpha 1 (Kodai’s version) is scheduled for February 28 and Alpha 2 (Yamamoto’s variant) for March 31.

The difference between the two is mainly their color scheme; the same prototype photos are circulating for both models, all showing identical option parts and the ability to fold up for storage, though there are different pilot figures with each one. The hobby magazines jumped on this with photo coverage just a few days later; keep reading.

COM Planning Co., Ltd. crossed into unexplored product territory when they announced the release of these two items. Measuring about 7.75″ x 9.8″, they are layered to provide a backlighting effect to whichever image you prefer–the intriguing mural in Gamilas headquarters, or the battle scene painted by artist Tadashi Morishita for Great Mechanics DX #22. Both are available through the Yamato Crew website, and perhaps other online sources. 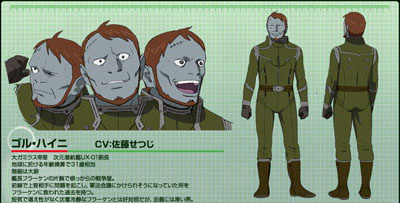 The official 2199 website rolled out some new characters in late December, presumably in advance of their onscreen appearances in Chapter 4. Above we have the remaining officers in General Domel’s forces, both based on designs seen in the original TV series. 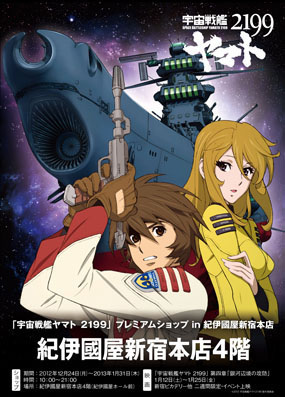 Kinokuniya’s flagship bookstore in Shinjuku, Tokyo, echoed a key moment in anime history when they dedicated a section of the store to Yamato products, naming it the Yamato Premium Shop. The key moment happened in May 1979, when the first store dedicated to anime merchandising opened in Japan, called Anime Shop Yamato. It was actually part of a store that would later be renamed Animec, but the purpose was pretty much the same thing we see here: a place to get your Yamato swag.

Most of the stuff shown in the photos below was previously available at movie theater gift shops, and since the Premium Shop will be open through January 31, it will probably expand in the meantime. In fact, this particular Kinokuniya store is just a couple doors down from the Shinjuku Picadilly movie theater where the opening day talkshow events happen, so the timing and location are no accident.

Incidentally, this will also be the site for an autograph signing on January 19 when voice actress/Yamato Radio host Aya Uchida arrives for a personal appearance.

One bit of new merchandising available at the Premium Shop is this postcard set, which captures the title frames from each of the first six episodes. Just 20 more to go. 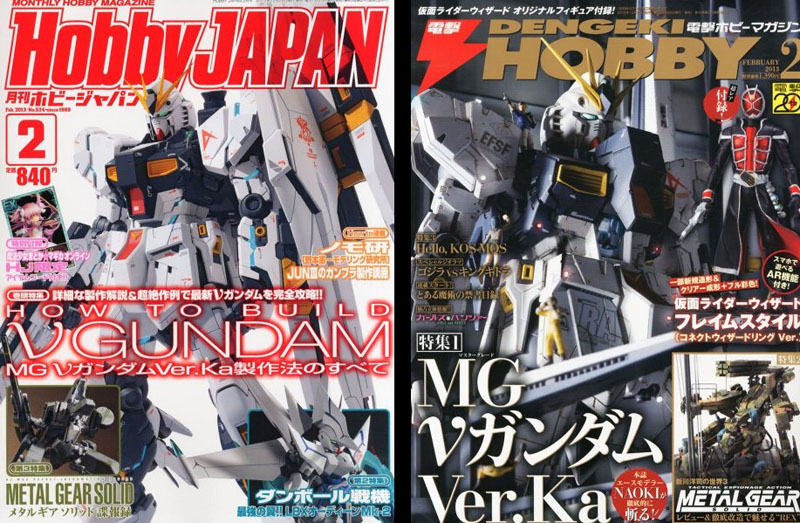 With Chapter 4–and new model kits–fast approaching, the hobby magazines had plenty to report. Hobby Japan offered up three pages on the Gamilas set, the second Earth fleet set, and the Cosmo Zero. They also presented the first concept sketches for Megahouse’s Akira Yamamoto figure. See the pages here.

Dengeki, whose closer relationship with Yamato was been proven time and again in 2012, contained 8 pages of news covering a wider field: Cosmo Zero prebuilds, a look at the Chapter 4 theater goods, a 3-ship Gamilas garage kit set, and the 2-ship Gamilas kit with its bonus model: a Pluto reflection satellite. Dengeki also announced a Yamato modeling contest that will pay off in the May issue (published in March). See the pages here.

Both magazines featured stills from the forthcoming episodes 11-13, but nothing from 14, to be titled A Witch Whispers. Curiously, there has been a complete blackout of stills from that episode on the official site as well. Dengeki simply noted that Yamato fans would be satisfied by it. 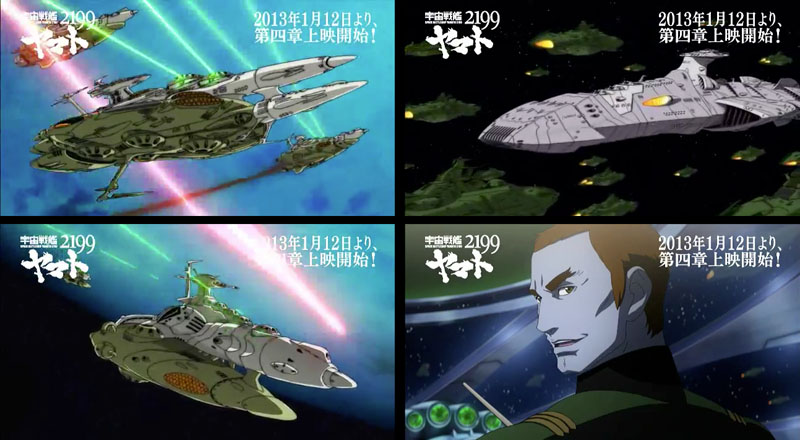 Something that definitely satisfied Yamato fans, no matter what language they speak, was the preview for Episode 11 (the first portion of 2199 Chapter 4), which got right to the heart of a still that had everyone buzzing back in November–a completely unexpected image of a Comet Empire ship in battle! 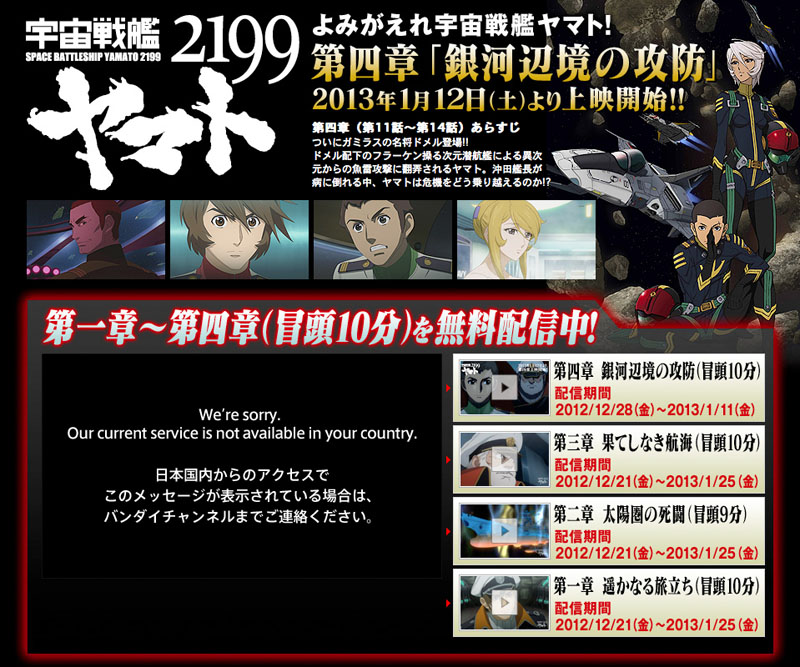 The segment premiered on the Bandai Channel website, which streams this and trailers from previous chapters–but only to Japanese web users. If you live somewhere else, you had a chance to see the footage on YouTube in late December, but that window has unfortunately closed. 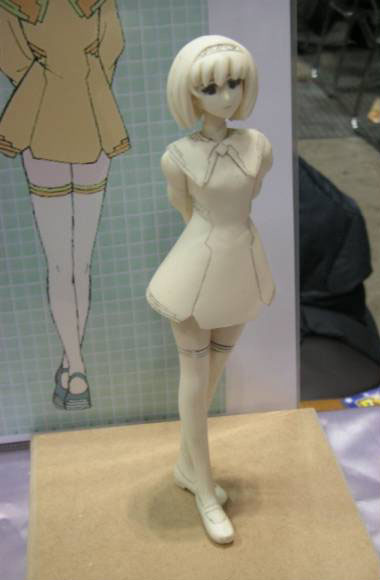 Finally, another item that drifted through the month of December was a new 2199 garage kit figure (by a company called Hagane Shrine) of Hilde Shulz in 1/8 scale. It was sold at a hobby show called Treasure Fest, and will probably appear again as the months unfold. 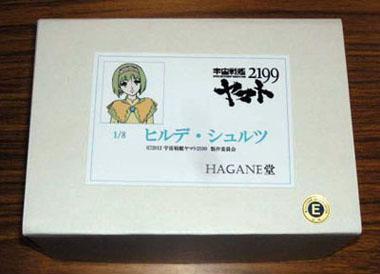 We’ll close out with some new fanzine covers, spotted at Comic Market [Comiket] 83 the last week of December. It’s already been a year since the first ones surfaced, and these certainly won’t be the last.