Another eventful month has come and gone in the colorful history of 2199, closing out the midpoint of the series with the release of Chapter 4 on home video. Here’s the roundup of everything that happened in February 2013… 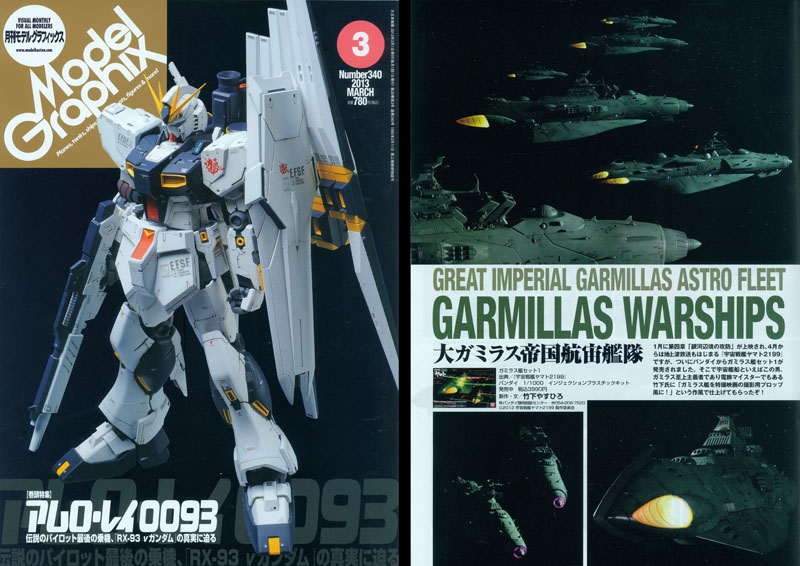 The unofficial handoff into February was the release of the first 2199 Gamilas model kits (sigh…okay…”Garmillas”) on January 26, and the March issue of Model Graphix magazine hit the stands at exactly the right time to cover them. This issue contained three pages on the new models and one on the soon-to-arrive Cosmo Zero Alpha 1.

See the pages here along with additional model photography 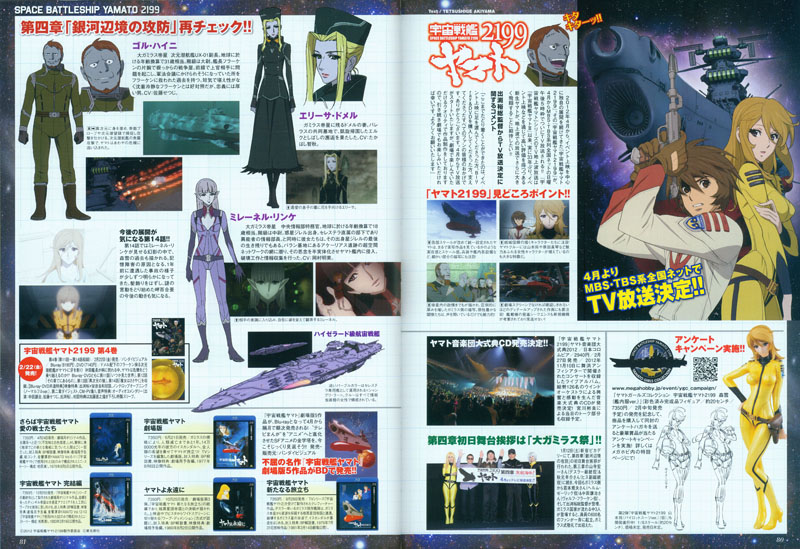 Hyper Hobby kicked off the month with its customary 2-page news capsule, covering the TV broadcast announcement (the series is set to debut on Japanese TV April 7), product blurbs for Megahouse’s Yamato Girls figure collection and the original Yamato movies on blu-ray (scheduled for release throughout the year), and new characters from Chapter 4. 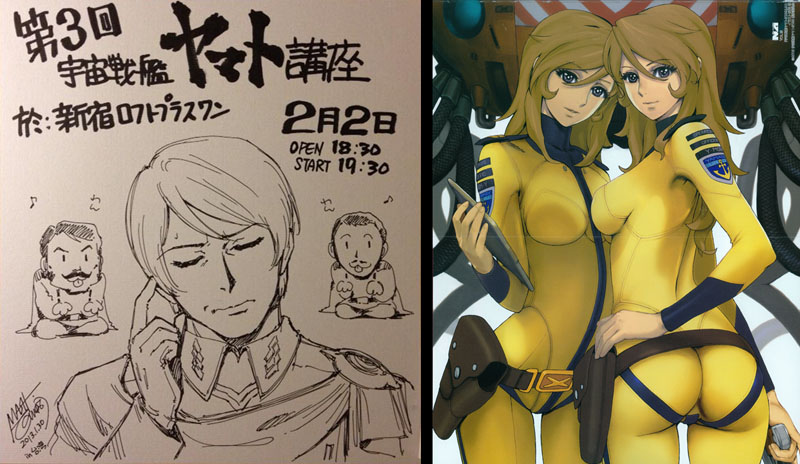 As the name indicates, this was the third in a series of lectures–informal fan gatherings, really–to discuss all things Yamato. As before, this was held at the Loft Plus One nightclub in Shinjuku, Tokyo. All that emerged afterward, unfortunately, was the promo art shown here. For reasons best understand by the artist, the Talan brothers are meowing insistently at Dessler. As for that eye-popping image of Yuki Mori, keep reading… 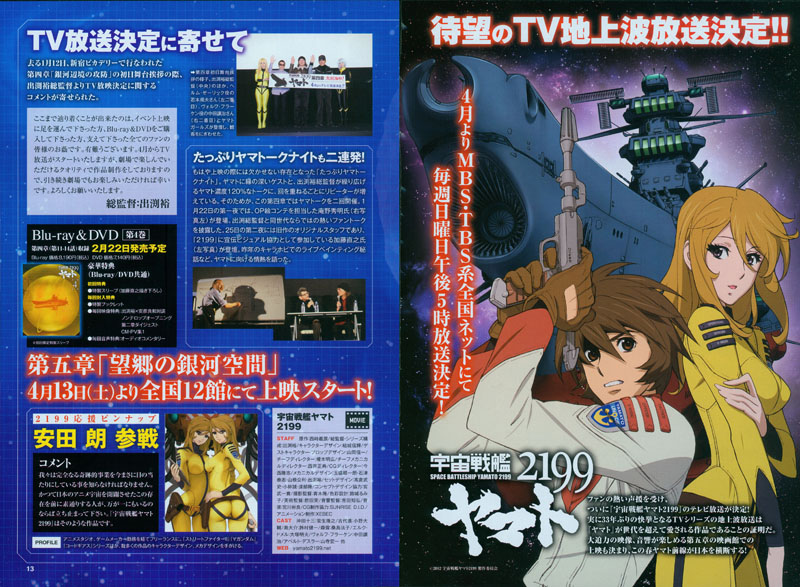 After a well-earned month off, Michio Murakawa’s Yamato 2199 manga resumed in New Type Ace. Chapter 11 of the ongoing adaptation ran 29 pages that kick off the Pluto storyline from Episodes 5 and 6. Also between the covers was the 2-page news spread above, the 8th installment in Ryusuke Hikawa’s Yamato Lessons from the Past essay series (read it here), and the previously-shown poster of Yuki Mori by artist Akira Yasuda (a character/mecha designer with credits on Street Fighter II, Turn A Gundam, Code Geass, and others.) 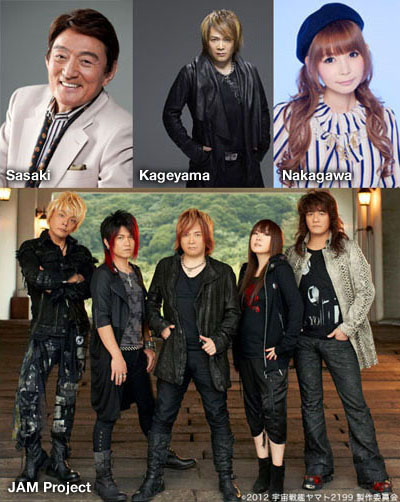 See the manga pages and larger image of the poster here.

Yamato music news is always welcome, and this was easily the biggest since the live concert in November 2012. JAM Project is a collective of Japanese vocalists who specialize in anime and Sentai [live-action superhero] theme songs; members of this group have been performing for decades, and became widely known for their Super Robot Spirits and Super Sentai Spirits concerts in the late 90s and early 00s. Isao Sasaki, the original Yamato singer himself, is occasionally counted in their ranks. (See Sasaki perform the Yamato theme at Super Robot Spirits 1999 here)

On February 9 it was announced that several members of JAM Project would band together under the name “Yamato All Stars” for a special rendition of the opening theme for 2199‘s TV broadcast. This “dream team” will consist of Isao Sasaki, Hironobu Kageyama, Shoko Nakagawa, and others. Their version of the theme is scheduled for release as a CD single on May 1 with proceeds to benefit 3/11 earthquake relief.

The 5-meter Yamato model was built in 2009 for Resurrection and made the rounds for 2199 at last summer’s hobby shows. It popped up again for a week-long stay at a shopping plaza attached to the Central Japan International Airport (Centrair), located near the city of Nagoya. The co-sponsors for the display were Tsutaya Bookstore and Machi Asobi, a city-wide anime/manga festival held twice a year in Tokushima.

Read about Yamato‘s involvement in the October 2012 Machi Asobi here.

See more photos of the model at these Japanese blogs: Blog A | Blog B | Blog C 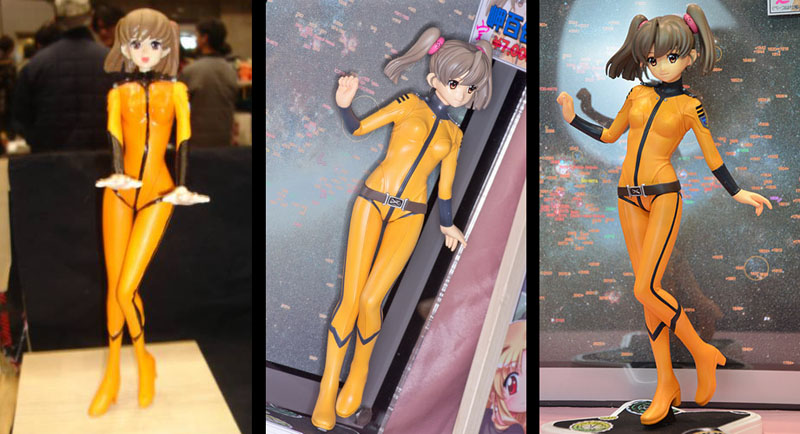 “Wonderfest” is one of Japan’s biggest anime/manga/hobby events, taking place twice a year. Professional and amateur exhibitors alike share space for a single hectic day in which normal copyright restrictions are relaxed and just about anyone can offer their wares to a hungry public. Garage kits are a staple of Wonderfest, and the girls of Yamato 2199 were out in force. Above we see two different figures for Yuria Misaki. The maker of the first is unknown, but the second (and obviously more refined) version came from a company named Mailbox.

Yamamoto’s status as 2199‘s breakout character was reinforced by two other figures spotted at the event. The one at left is by a company named Crock of Gold. The maker of the other is unknown. 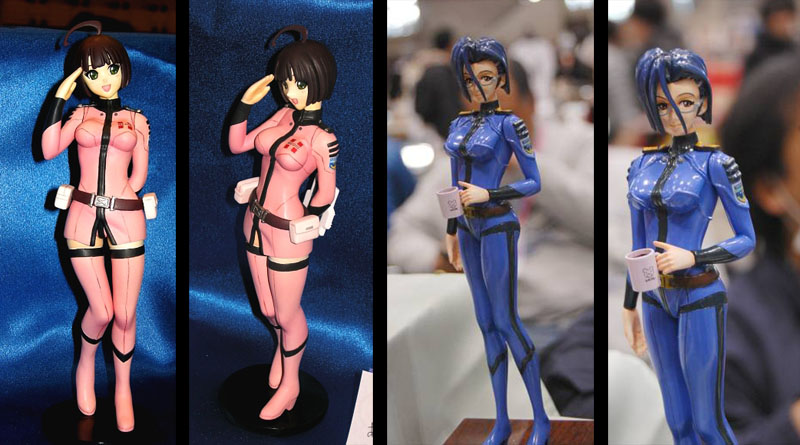 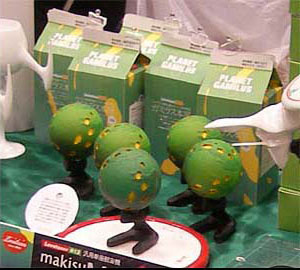 Not to be forgotten, Makoto Harada and Kaoru Niimi got garage kit figures of their own. With the next Wonderfest scheduled for July, there will no doubt be plenty more to keep them company.

Another item spotted at the event falls into a completely different category. “Love Takos” is a garage kit maker that specializes in unusual Gamilas artifacts. This time they pushed it to a whole new level with the planet Gamilas itself. Sold in handy cartons because hey, why not?

Anime World Star is a name that’s come up before in these reports. Headquartered in the famed Nakano Broadway mall in Tokyo, this boutique retailer creates its own licensed merchandise and has rolled out more than a few Yamato items over the last several years. Their 2199 lineup includes this series of “votive straps,” wooden fobs that can be used for keychains, bookmarks, or whatever else you like. The first six (above) were released in 2012: Kodai, the Yamato girls, and Analyzer.

The next six, plus two special editions, came out in February: Dessler, various Gamilas characters, and Starsha.

The seemingly eternal wait for the commercial release of new episodes reached its latest oasis point when Chapter 4 went on sale everywhere. Since the content was described in Report 15, this would be a good time to take a look back at how these discs have been charting in Japan. Sales figures are tracked by a data-mining company for the music industry called Oricon [Original Confidence, Inc.]. According to Oricon’s records, 2199‘s blu-ray sales have been very healthy. Chapter 1 hit #3 with 15,908 units during its first week, Chapter 2 hit #2 at 19,372 units, and Chapter 3 also reached #2 with 23,852 units. Chapter 4’s blu-ray came in at #3 during its first week with 20,941 in sales. An average of 20,000 may not seem like a lot, but since Japanese blu-rays retail for 3-4 times the cost of an American disc, this represents substantial revenue. (Also note that these numbers do not include the theater-exclusive blu-rays or DVDs.)

Special thanks to Facebook group member Daniel George for assembling this info.

As usual, the Yamato Crew website sweetened the deal for Japanese fans or foreigners with Japanese friends; discs ordered from their website included voice-recording facsimile scripts for each of the four episodes and an exclusive trading card. As consolation for the rest of us, click here to hear the full version of Chapter 4’s closing theme, The Light of Memories by vocalist KOKIA (as heard at the end of the big-screen version, streamed on Bandai TV). 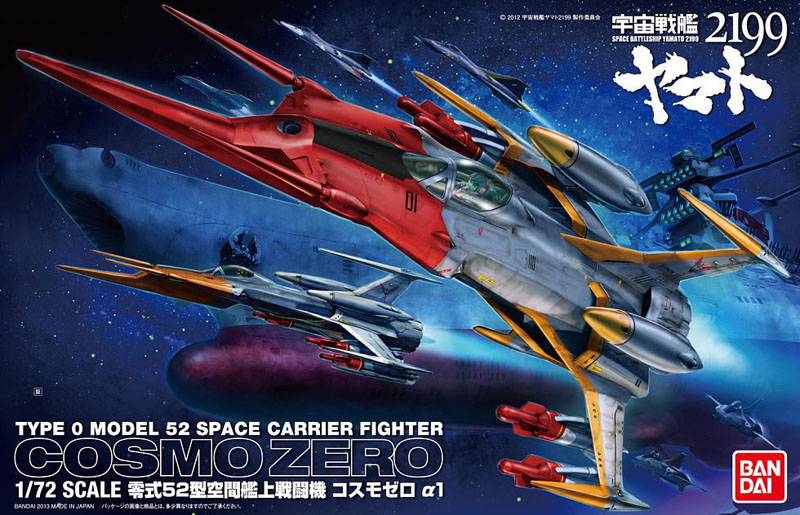 Second only to the Chapter 4 video, this was undoubtedly the crown jewel for the month of February, Kodai’s Cosmo Zero model from Bandai. Box art for the kit is by the great Hidetaka Tenjin, justly famous as the go-to painter for Macross Valykyries, and record-holder for the most Yamato mecha paintings by one artist (in the Yamato Fact File magazine series). Mr. Tenjin also confirms that the art for Cosmo Zero Alpha 2 (Akira Yamamoto’s version) will be different when it arrives March 31.

Clocking in at 1/72 scale (just over 9″ long), Alpha 1 comes with almost as many options as the real thing. It can be displayed in flight on an articulated stand or on the pad with landing gear down. The nose and wings fold up for storage, and two Kodai figures are supplied, sitting and standing. 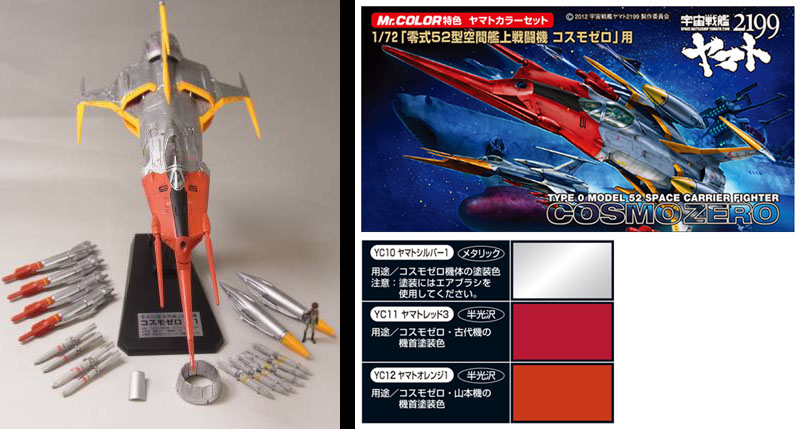 There are also multiple choices for weapons loadout, external fuel tanks, and a second engine baffle. Because you just never know. Hobby supplier Gunze Sangyo was hot on the heels of Alpha 1 with a custom paint set in its “Mr. Color” Yamato line. A set like this has been released for each of the three 2199 models released so far, which dictates the numbering system on these paints; the Cosmo Zero colors are numbered 10-12.

See extensive photos of the kit and packaging here, and a modeler’s photo blog here.

Gunze Sangyo also reissued its “Mr. Color” Garmillas set in February, for those who were just getting around to building the previous models.

More model news followed hot on the Zero’s heels when Bandai released CAD images of their next kit, and this one took everybody by surprise: the Polmeria-class Astro Assault Carrier from the beginning of the series. Easily forgotten after its single appearance at the beginning of the saga, it was only commercially released once before, as a resin kit from B-Club back in the 90s. If all goes as planned, it will finally enter the plamo world on May 31.

It will also check in at the heftier end of the scale. At 1/1000, it will stretch to over 15″ long (the 1/1000 Yamato is about two inches shorter) and include two versions of the flying wing-style Melanka strike fighter (at right): a 1-inch fighter in scale with the carrier and a full-blown 6.6″ bonus kit. 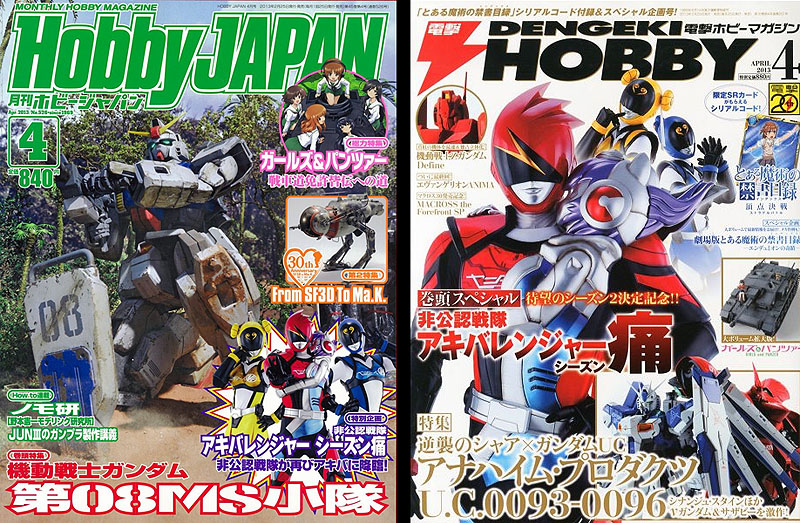 With this sudden rush of model news, the hobby magazines had no shortage of things to talk about. Hobby Japan gave six pages to Yamato kits with brief coverage of related events and the first look ahead into Chapter 5. Dengeki devoted six color pages to Yamato kits and two black and white pages to character and mecha design. Both magazines also published new pics of Megahouse’s prototype for the forthcoming Akira Yamamoto figure.

Dengeki‘s May issue (publishing March 25) is scheduled to include the results of a Yamato model contest announced last fall. Numerous entries can already be seen on their website here. 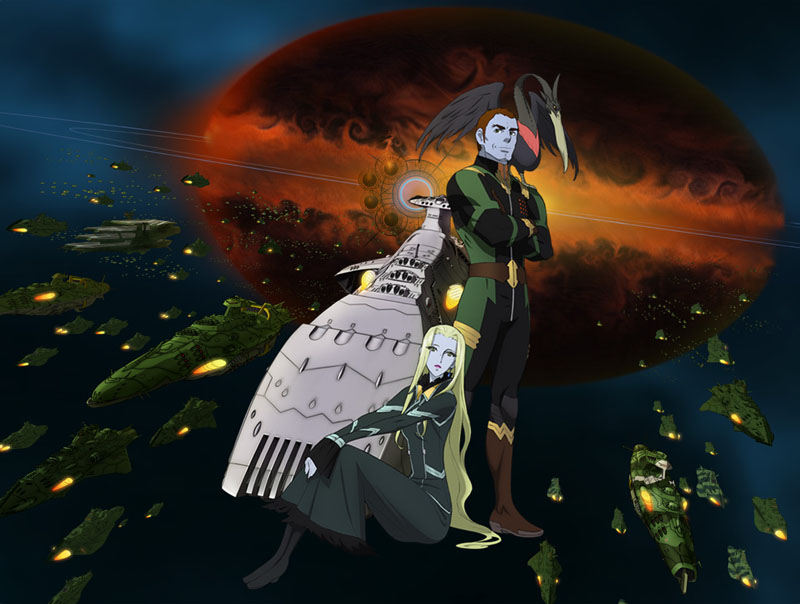 The official Yamato 2199 website got a facelift when the key art for Chapter 4 gave way to Chapter 5 and two new character entries were added to the crew lineup. 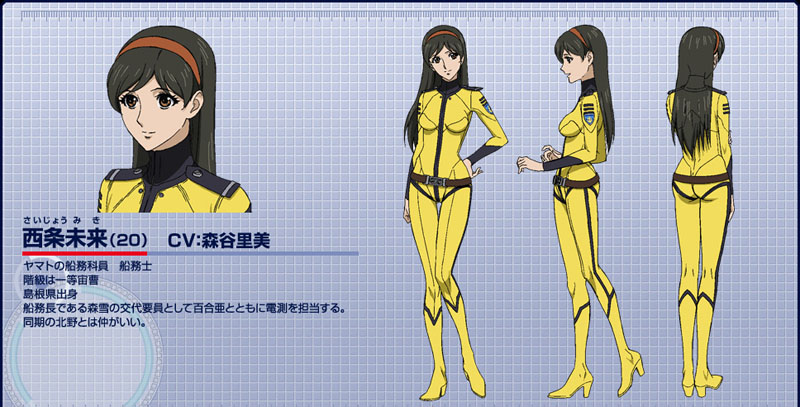 Takes charge of the ship’s sensors as a backup for Yuki Mori when she is absent. Works closely with Kitano. 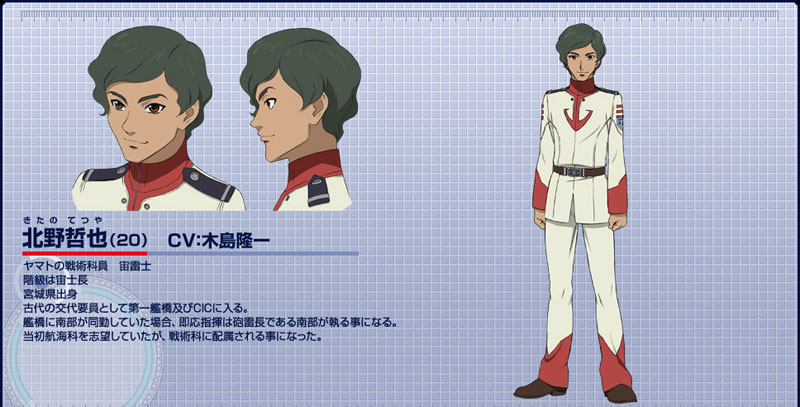 Works as a backup for Kodai on the first bridge and CIC. When Nanbu carries out said work on the bridge, he substitutes as the weapons officer in Nanbu’s position. He originally aspired to join the navigation division, but was assigned to the tactical division.

Sunset Creative is a new player in Yamato world, with the character postcards shown in Report 15 as their initial offering. Their line expanded at the end of February to include these tote bags (above left) and lunch bags (above right) with spaceship art matched to appropriate fabric colors. They are currently listed at Amazon.co.jp, but are unfortunately not available to overseas customers. (For what it’s worth, Amazon.jp only seems to ship flat media overseas: printed matter, CDs, and videos. You need a Japanese address to score other items.)

Finally, here’s a pack of 2199 doujinshi (fanzines) that emerged via online auctions during the month of February, either published for Wonderfest or left over from previous events.