Merchandise is always part of a movie premiere, and the theater souvenir shops were jam-packed with a new round of Chapter 5 products that filled all the usual categories. 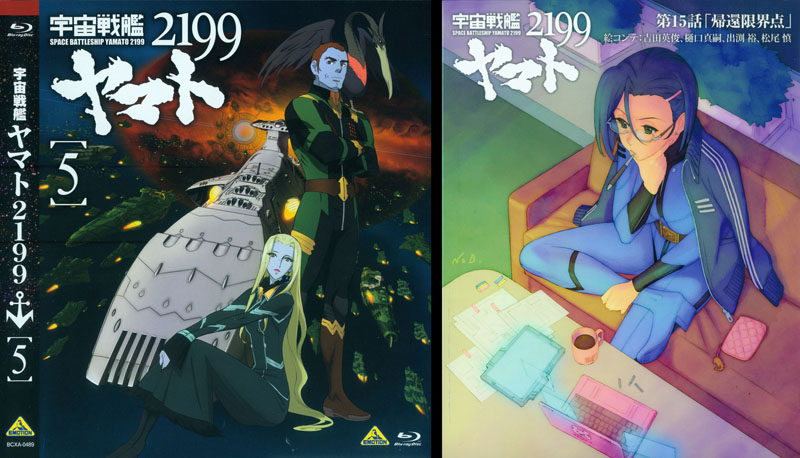 The limited-edition Chapter 5 blu-ray sold fast and furious, bundled with a storyboard booklet covering Episode 15, which contained the first dramatic battle between Yamato and Domel–and fittingly took four artists to draw. The cover art by character designer Nobuteru Yuuki was a nod to Kaoru Niimi’s important role in these new episodes.

The bonus features on the disc include an audio commentary on Episode 16, an on-camera interview with veteran sound designer Mitsuru Kashiwabara, and promo clips from previous episodes. There is also the wraparound slipcase art painted by the great Naoyuki Katoh, and a 12-page booklet which can be seen cover to cover here along with more of the package art.

Other than the storyboard booklet, everything else will come with the standard release of the disc on May 28. 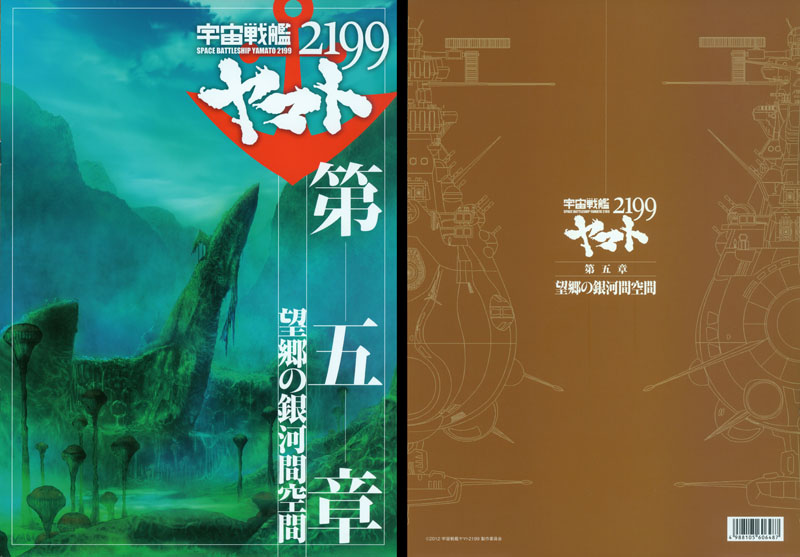 The program book for Chapter 5 upheld the high quality of its predecessors, which will stand as the defining print-media resource for the series until something more integrated (and more widely distributed) comes along. This 40-page volume can be seen cover to cover with translated text features here. 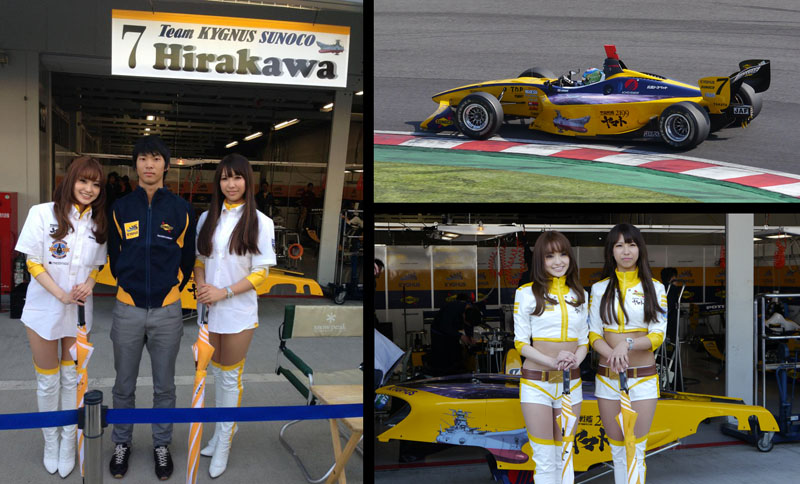 As Chapter 5 made its first rounds at theaters, driver Ryo Hirakawa took Team Kygnus’ Yamato-sponsored racer out for its first battle at the Suzuka Circuit, round 1 of the 2013 Super Formula season. He and the Yamato 2199-emblazoned Car 7 qualified for 8th position in the trials on April 13 and held that spot in the race itself the next day.

The 2013 season will continue all the way into November and can be tracked at Super Formula’s English-language website. More photo-coverage of the April 13 race can be seen here.

Yamato 2199 wine first appeared in the 2012 summer convention season, and during the weekend of April 13-15 it could be sampled again at this Kyoto restaurant just a few minutes’ walk from a local theater showing Chapter 5. In commemoration of both the new film and the TV debut, the place was decorated in Yamato swag and visitors could either partake in Dessler’s or Dr. Sado’s preferred libation.

Episode 2 was broadcast on TBS/MBS in Japan at 5pm Sunday (almost the same timeslot as the original series in 1974), and was accompanied by another live simulcast on NicoNico featuring two Yamato girls. Akira Yamamoto (portrayed by a well-known cosplayer with the stage name “Shiki Aoki”) returned as MC along with nurse Makoto Harada. As before, they announced Yamato news and interacted with user comments for a half hour before and after the episode, pausing to watch it live along with the audience.

This was the first episode to include a standard end credit roll with a new song (“Love Words,” performed by Mika Nakashima) and an art montage designed by manga/anime superstar Kia Asamiya. See a stitched-together screenshot of the art (made by a Japanese viewer) here. By May 1, the song rose to number 1 on something called the Cable Broadcast Request chart. It will be released on CD May 22.

The official 2199 website has grown substantially since it first went live in November 2011, but its art gallery section went strangely neglected until this date, when it was beefed up tremendously with background paintings from the series.

Report 18 mentioned Bandai’s initial announcement of this limited-edition model kit set to be released in June, three Garmillas warships molded in Imperial blue colors. The Premium Bandai website opened its preorder window on the 17th and revealed a special feature of these kits: special “eyeball” parts that glow in UV light. 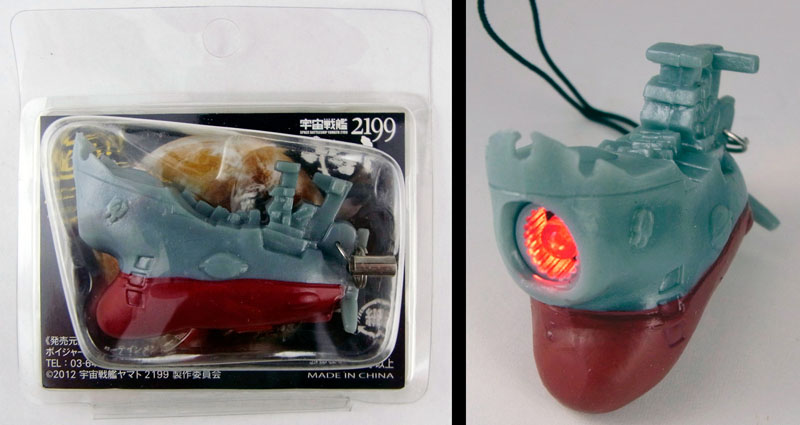 Another Yamato item that generates light could be found on this day, a miniature keychain mascot. Originally released by Bloom Co. in December 2009 for Yamato Resurrection, it was newly repackaged for 2199 and contains a tiny lightup Wave-Motion Gun. 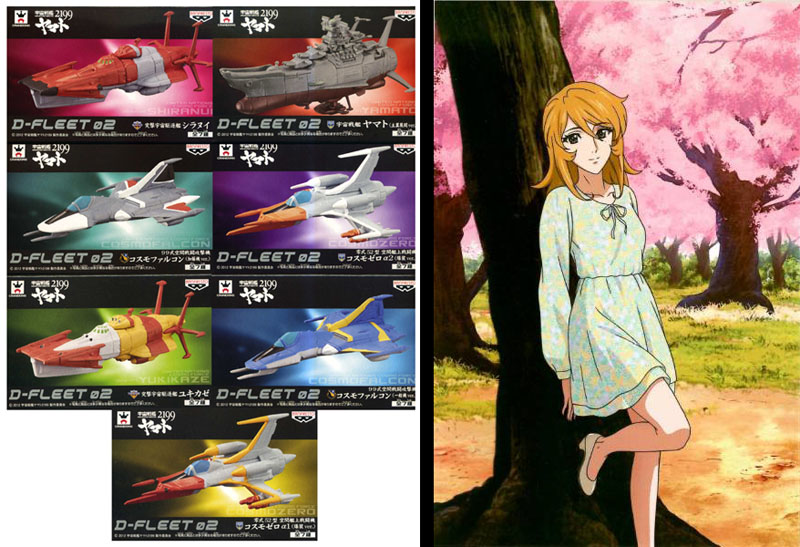 Banpresto, the branch of Bandai that specializes in toys for crane-arm games, released this new addition to their modest lineup of 2199 toys, seven miniatures in set 2 of the D (deform) fleet: a wings-out version of Yamato, weaponed-up versions of the Cosmo Zeroes, two Yukikaze-type ships, and a pair of Cosmo Falcons. Together with D Fleet 01, this brings the count up to lucky 13.

A new 2199 tradition began with Chapter 4 in January to entice fans back into theaters at the halfway point of the two-week run; a limited-edition postcard of original art (above right) given away only during the second weekend. Last time, it was Yuki Mori in a festive new-year’s kimono. This time, she’s spending the day among the cherry blossoms.

The NicoNico simulcast for Episode 3 put Akira Yamamoto back in the MC’s chair, this time accompanied by the ebullient Yuria Misaki. The two made international headlines during their Yamato news segment when they held up a printed announcement reading OVERSEAS EXPANSION DECISION! TO BE NAMED STARBLAZERS 2199!

Everyone who saw it understood immediately, even if they could only read the English title, and the time was right since a finishing date for the series had been announced just over a week prior. The decision has been made to export Yamato 2199 under the Star Blazers banner (let’s hope they realize it’s supposed to be two words), but no information has been released about when, where, how, or in what language. Remember, the Star Blazers name is well-known in non-English-speaking countries, Italy chief among them, so there is no guarantee that America will be first on the list.

Nevertheless, it was a welcome news announcement that sparked many rounds of speculation in social media. To keep it real, just remember that the decision to export is just the first of many before it comes out the other end.

The subject of this Yamatalk session was sound. Director Yutaka Izubuchi sat down with original-saga sound designer Mitsuru Kashiwabara and his protege Tomohiro Yoshida who carried the torch for the Yamato Resurrection Director’s Cut and Yamato 2199. Once again, friend-of-the-website Gwyn Campbell was in attendance, and his account can be read here. 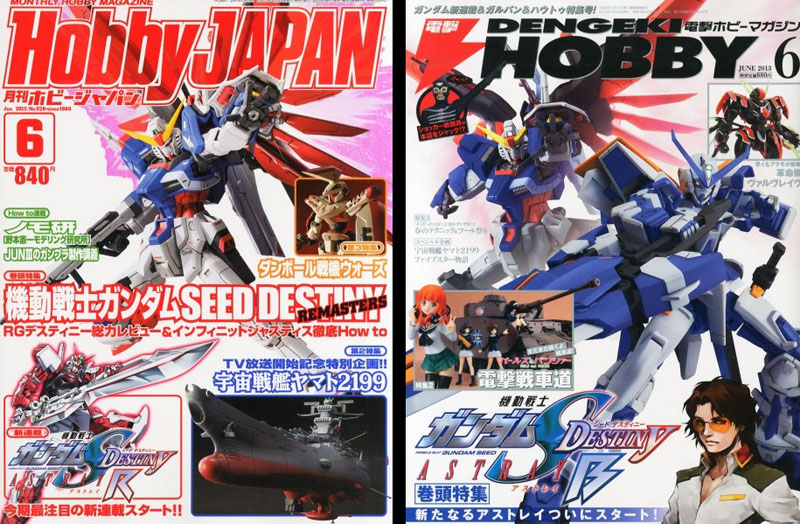 The two major hobby magazines had plenty of news on the 2199 front, and the balance of power shifted back to Hobby Japan with a whopping 26 pages of coverage: Chapter 5 news and generous photos of professionally-constructed Yamato models, both commercial and scratch-built. There was also another interview with Bandai’s Hirofumi Kishiyama, and prototype shots of the new kits that will take us into the summer.

Dengeki delivered 11 pages that went in another direction with a photo-feature on an amazing scratch-build of Dimensional Submarine UX-01 and the updated Gatlantis ships from Episode 11. Naturally, plenty of room was given to the next wave of models here as well. Let’s just say it’s going to be a great summer for Garmillas fans. 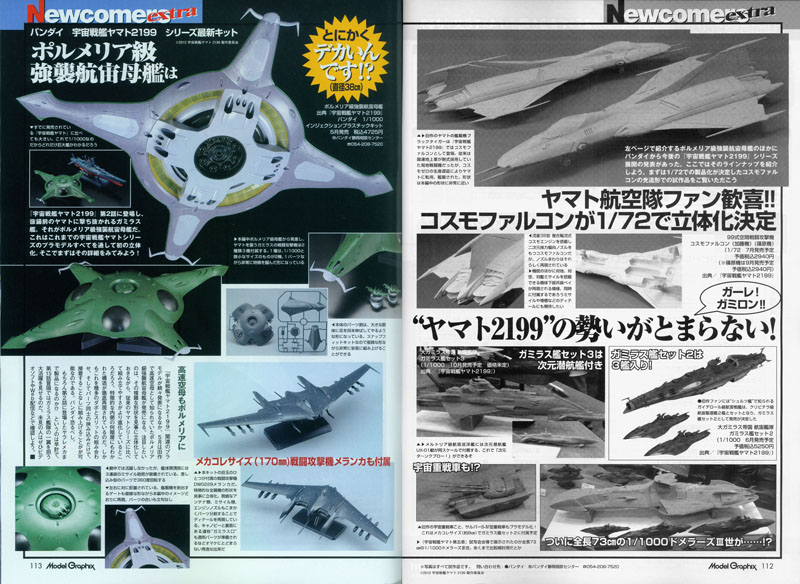 Though more modest in size than the big two, Model Graphix has also become a regular source of 2199 model kit news as shown by this two-page spread from the June issue. Your eyes do not deceive you–a 1/72 Cosmo Falcon is on the way. The Kato-type will be out in July and Shinohara’s will follow in September.

As the source of all the upcoming models, it was only natural for Bandai itself to sound the trumpet with this 24-page magazine that was distributed free to hobby stores. Assembled by the editorial staff of Dengeki Hobby, it provided both an intro to the series and a comprehensive overview of all the Yamato models currently or soon to be available. (Classic saga and 2199 alike.)

See this magazine from cover to cover here. 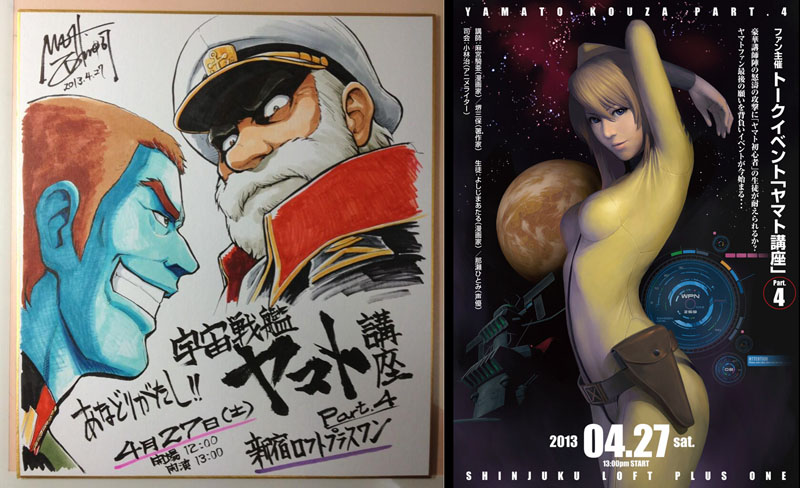 The Loft Plus One nightclub in Shinjuku, Tokyo, played host to the fourth in what has become an ongoing series of Yamato fan gatherings for young and old. Judging by the enormous amount of fan art generated for this one, these lectures seem to have become quite popular. See an online gallery here, and don’t forget to click the link at the bottom to see even more!

The NicoNico simulcast for Episode 4 didn’t feature another earth-shaking announcement like the previous week, but it did team up Akira Yamamoto with two other Yamato Girls for the first time, a new Yuki and a new Makoto. Up until now, the ranks of Yamato Girl cosplayers seemed limited to a select few, but after this there’s no telling who we’ll see on future simulcasts. For that matter, this was also the first program to bring in an outside guest, one of the chefs from the Yakitori Yamato restaurant.

Incidentally, these simulcasts can be viewed by anyone the world over. All you need is a NicoNico account (they’re free) and the acumen to tune in at the right time. (4:30pm Sunday in Japan.) Episodes are archived for one week at a time. Get started at the Yamato Crew website here. 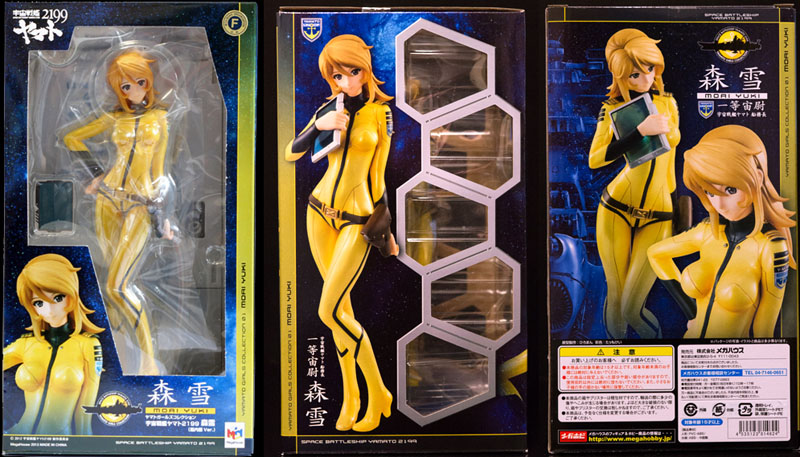 After many months of unexplained delays, Megahouse finally released the first figure in the Yamato Girls Collection, an 8″ version of everyone’s sweetheart, Yuki Mori. See her product pages on the Megahouse website here and here.

The upside of the long delay is that the next few girls in the collection will arrive much faster. Akira Yamamoto is scheduled for release in August (see her product page here), with Hilde Shulz and Yuria Misaki to follow in subsequent months.

Lastly, we close with a roundup of the 2199 doujinshi [fanzines] that floated across the radar during the month of April. They just keep coming…