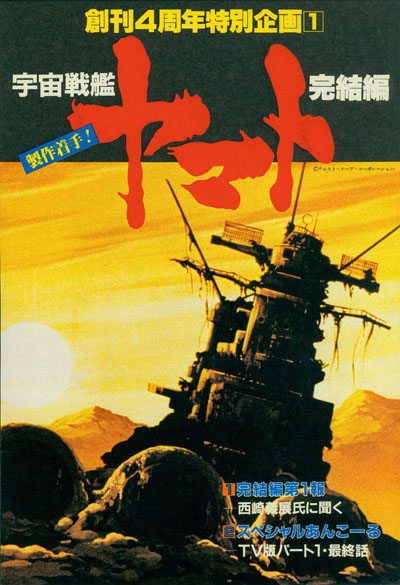 One day you will truly be laid to rest, Yamato. — We talk with Producer Yoshinobu Nishizaki

The release of Space Battleship Yamato The Final Chapter has finally been decided for March 1983. This was announced by Producer Yoshinobu Nishizaki on April 27 at an anime magazine press conference at the Akasaka Prince Hotel in Tokyo. He talked further about the content, progress, and his current state of mind.

[1] Why did you plan The Final Chapter?!

The plan for Yamato began with me during the time I took charge of Wansa-kun for Mushi Productions. In other words, if you think of it from the planning stage, 1983 will be the tenth year of Yamato next year. Therefore, I want to produce The Final Chapter to make a break in my own life as well as bring the work of Yamato itself to a conclusion.

When you look back at Farewell to Yamato (feature film, 1978), there was a surge that mobilized 4 million people and earned 20 billion from distribution. Pride certainly swelled in my heart. In addition, there were a variety of problems in the corporate management of Academy last year [1981], but the matter was completely settled last August. After reflecting on all these things, I began this work in order to add “distinction” to what I have done. Also, I wanted Be Forever Yamato (feature film, 1980) to be the culmination of quality in the Yamato series, but unfortunately I don’t think it attained that. What should be the theme and the appeal of Yamato has become diluted. Therefore, in The Final Chapter I personally wanted to carry out and determine the message of “what is Yamato,” and so it was planned. 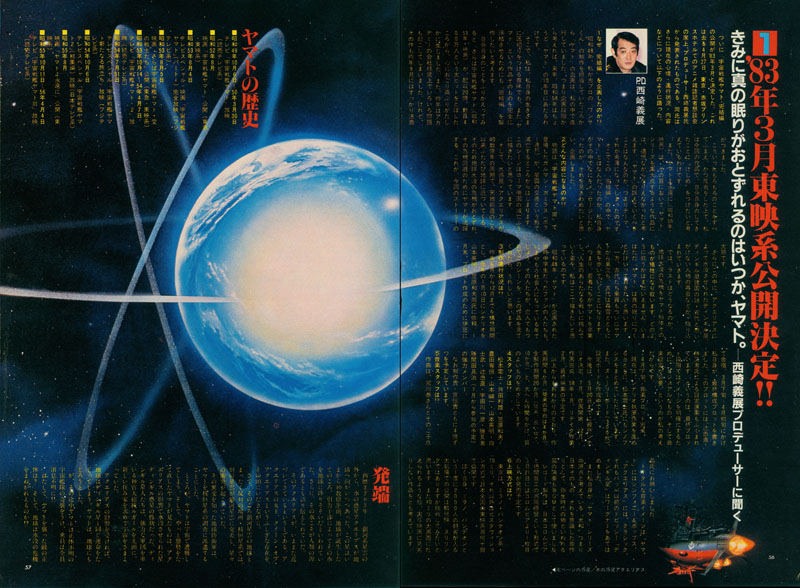 As for the story, it begins when the Galman-Gamilas Empire (and Bolar Federation) of Yamato III are destroyed by a collision of galaxies. In this scene I’d like to depict the fall of the Roman Empire. Then the water planet Aquarius approaches Earth again since its creation 4 billion years ago. A crisis of flooding arises, and Yamato plays an active part to prevent it. That is the outline of this story. Furthermore, Aquarius floods the planet Dengil, and the mystery of Dengil’s origin is woven in with Kodai being reunited with an unexpected person. What happens in the end? Yamato sacrifices its own hull to save Earth from the flood crisis. I cannot yet say how it will be saved. I would only like to say that now I want to truly lay Yamato to rest.

On the other hand, Kodai and the crew will leave Yamato at last, and Kodai will walk into a life with Yuki Mori. In other words, the young people will graduate from Yamato, and I want to show an image of them challenging the battle to find a new life. Some people who were fans in junior high school at the time Yamato was planned in 1973 have now reached the age where they have become members of society. I will be glad if they come to watch these scenes and this work with their lovers.

The conceptual phase went up to June of last year, and in December I asked both Hideaki Yamamoto and Kazuo Kasahara to start work on the script January 10. At the end of January, we stayed together at Shirakabeso to create the plot. From the end of March to the beginning of April, I wrote the final plot composition myself. Concept proposals by Tsuji Tadanao and Tomoharu Katsumata were also incorporated. This is because of my belief that music and visuals are necessary to clarify the image in the final draft plot. The music plan was completed in late April.

Currently, while pushing forward with the script writing, I had Leiji Matsumoto summarize a synopsis. Also, the storyboard (300 pages) and design boards are being created. The script will be finalized by May 20. Animation drawing begins in July, and should be completed in December. Retake work will begin in January 1983, and the final edit is scheduled for February. As you can see, the animation period is more than six months (the conventional average is four), and the complete production period is 20 months (normally 10). We’re taking this much time to aim for good quality.

For a composer, I asked Hiroshi Miyagawa and his son Akira. The total music image of Yamato is symphony and pops, Aquarius is classical Bach and Debussy, and we applied Wagner to the Planet Dengil.

Personally, I regard Japan itself as the origin of the Yamato series. We’re conscious of this while making the sound, and the BGM includes a performance on a flute of the Yayoi period. The record production is in the form of a joint mastering of sound engineering by Tokuma and Columbia Japan, and the first LP release is expected for May 21.

The Milano Pantheon theaters in Tokyo will show it in 70mm, and several hundred Toei theaters across Japan will use the Vistavision method. Personally, I think showing it in a large theater where 2,000 people at a time can see it is a thrilling challenge I’d like to try. Also, the picture has to stand up to a big 70mm screen, so I think the work has to look as good as a live-action film. 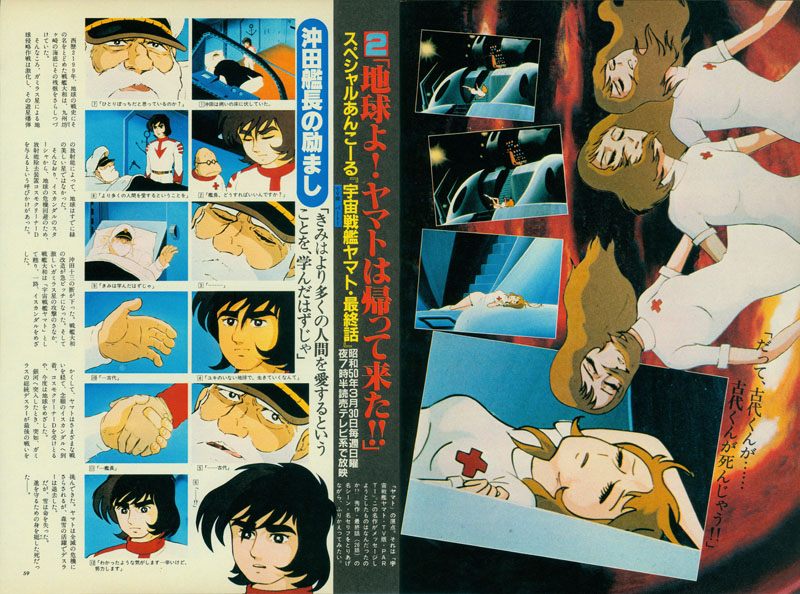 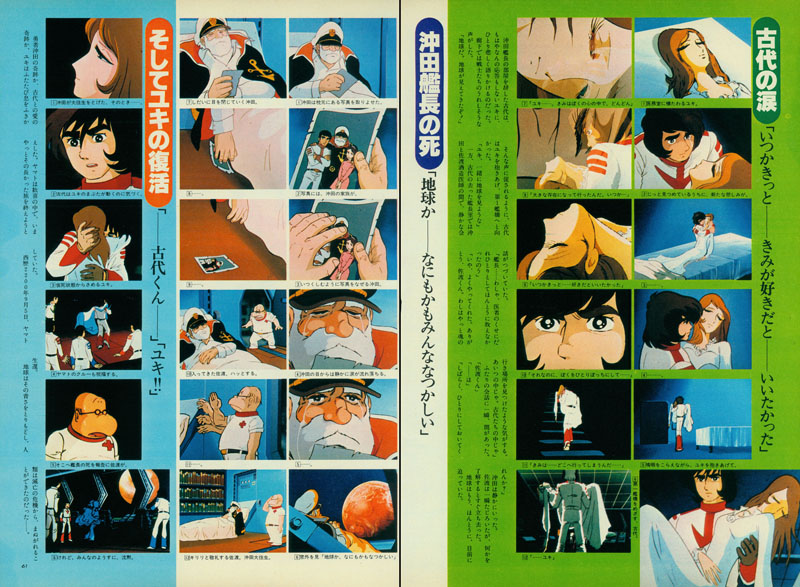 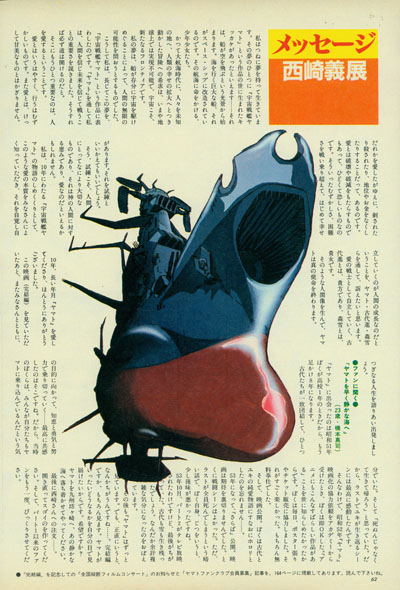 The last page of the article opened with a reprint of Yoshinobu Nishizaki’s “Message from the Producer” from Yamato Fan Club Magazine #28, which was presented in full here.

Below that came this heartfelt comment from a member of the fan community:

Hearing from the Fans

“Yamato to an early calm sea”

It is already eight years since I first came across Yamato in 1976, in my first year of high school. Kodai and the others acted together for one purpose, overcoming with wisdom, courage and effort–that was the part I liked best. In those days, everyone had the feeling of marching onto Yamato themselves, thinking “I won’t die, I’ll make it back alive.” So I was really impressed by the scene where Yuki revived at the end.

Because of that, when I received a request from Academy to cooperate with the Yamato movie promotion in 1977, I said OK immediately because I wanted to make it known to the world that “there is this great anime work.” I cooperated with poster hanging and ticket sales every day. It was a lot of fun. Of course, it was free service. And the movie was released. I would never forget the innocent love story of Kodai and Yuki.

In 1978, Farewell to Yamato was released. The movie did not disappoint. The battle scenes were particularly good. But in the end it was a dark story in which everyone died, and to tell the truth it left a bad aftertaste in my mouth.

In October 1978, Part 2 was broadcast on TV and the ending was different. Both Kodai and Yuki survived. I remember that it somehow had a more complex feeling.

I watched all of Yamato after that, but to be honest, something was…different. Of course, I will see The Final Chapter. I want to see what happens to Yamato with my own eyes. Is there hope?

Please let Yamato rest in the calm sea of Kyushu Bogasaki. That is my last request to Mr. Nishizaki. Please bring a thrill to my skepticism. And please surprise the fans again who have been here since Part 1.