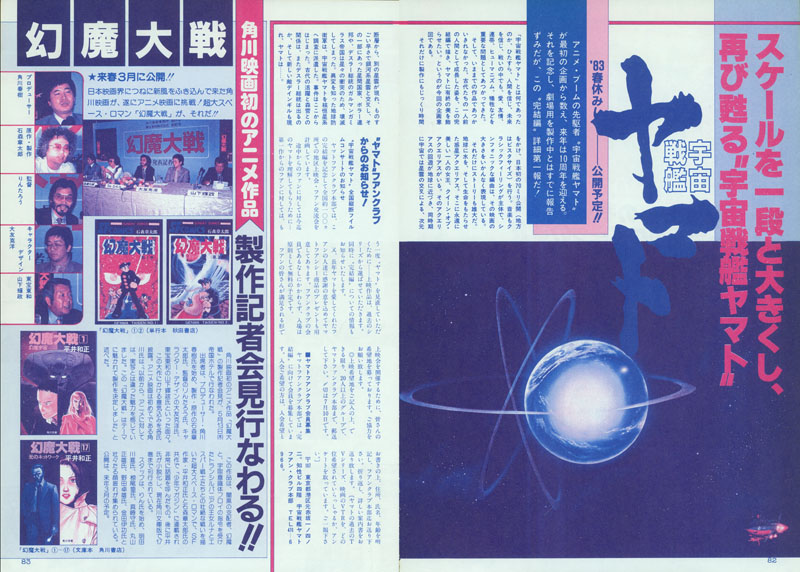 Space Battleship Yamato was the pioneer of the anime boom, and counting from the first planning, next year will be the 10th anniversary. It has already been reported that a feature film is being made to commemorate it, but is this the first detailed report of The Final Chapter? Space Battleship Yamato has earnestly believed in human beings, in the future, in the battle, in love, friendship, solidarity, humanism, and sacrifice is dealt with as an important issue.

What could not be covered in the works up until now was the part about Kodai growing up into a fell-fledged human being, so the intention is to depict it in this conclusion and give Yamato a crowning glory. That is reason alone to take time with slow and careful production, and this will also be Japan’s first 70mm release (the norm is Vista size). Symphonic music is being arranged with a classical feeling to fully express the scope of the movie.

The story is more magnificent, too. The planet Aquarius was able to bring water to Earth, and life with it. There is one beautiful queen there, the Queen of Aquarius. The wandering planet Aquarius approaches Earth because of a galactic collision; another galaxy emerges from a dimensional fault and suddenly collides with the Milky Way where the galactic nations reside, completely destroying the Bolar Federation and the Galman-Gamilas Empire. The Earth Defense Force learns of the accident and dispatches Yamato to investigate at the galactic core. The incident begins from there.

Kodai’s relationship with Yuki and with Emperor Dessler comes out. Also appearing is Dengil, the new enemy of Yamato… 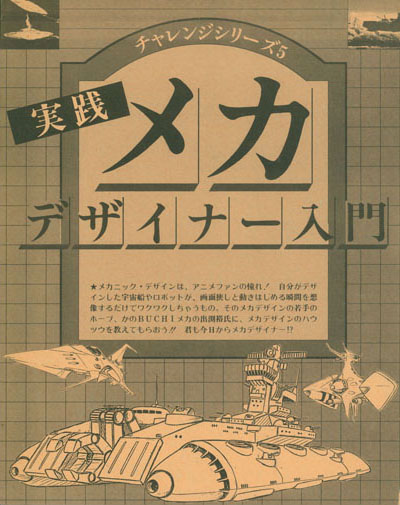 These pages vary from the normal appearance because they were published in a different format, smaller monochrome paper bound into the magazine.

This was a 16-page section devoted to the process and technique of mecha design as discussed by a young Yutaka Izubuchi. At the time he had contributed mecha designs to Yamato III and the preproduction of Final Yamato in addition to the TV series Battle Mecha Xabungle (the source of most of the illustrations).

It concluded with a conversation between Izubuchi and another designer named Shoji Kawamori, who would soon grab the world’s attention with his groundbreaking work on Macross. Scroll down to see the pages and read the conversation, supplemented by the words of a very special guest. 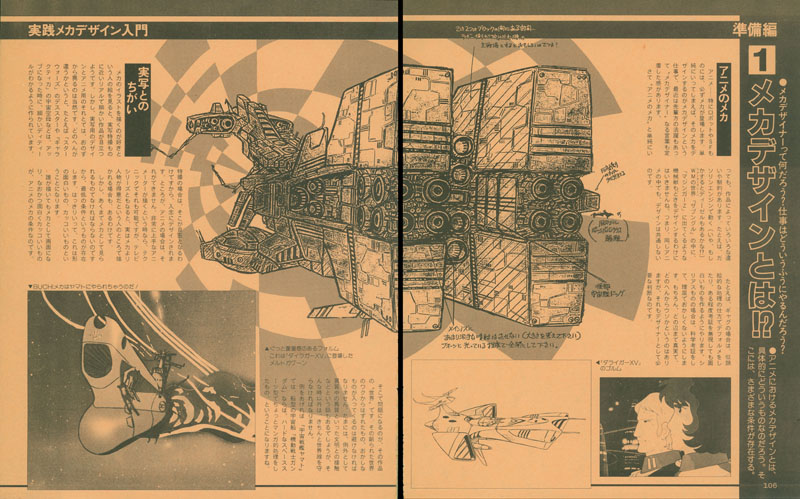 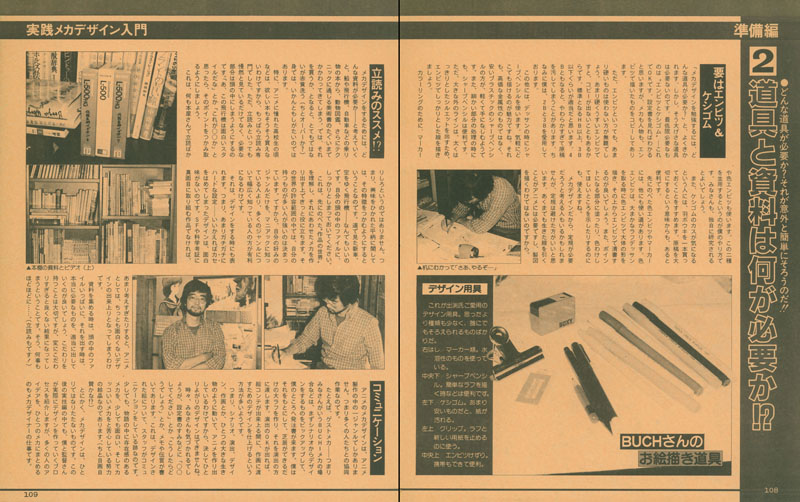 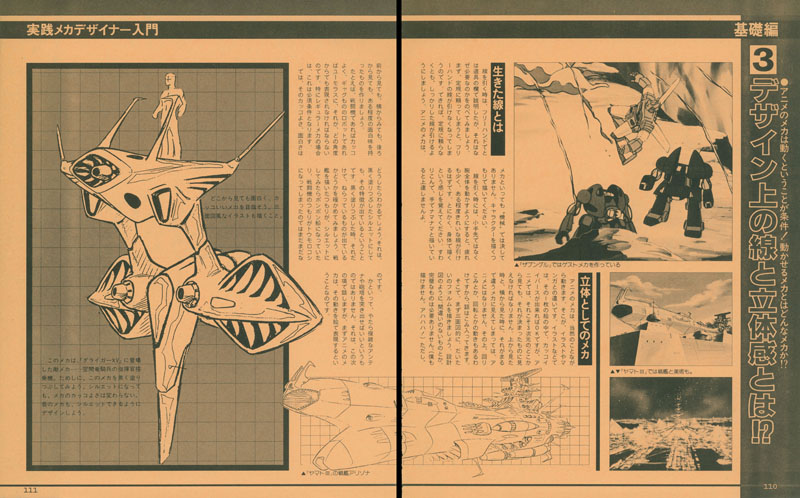 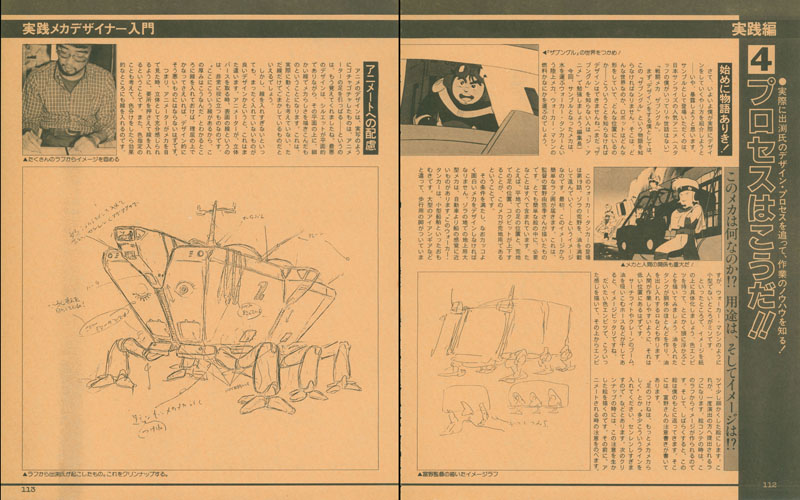 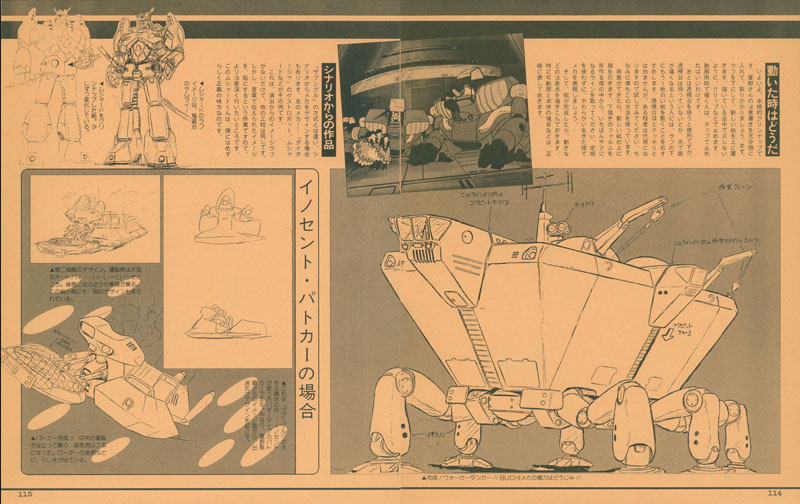 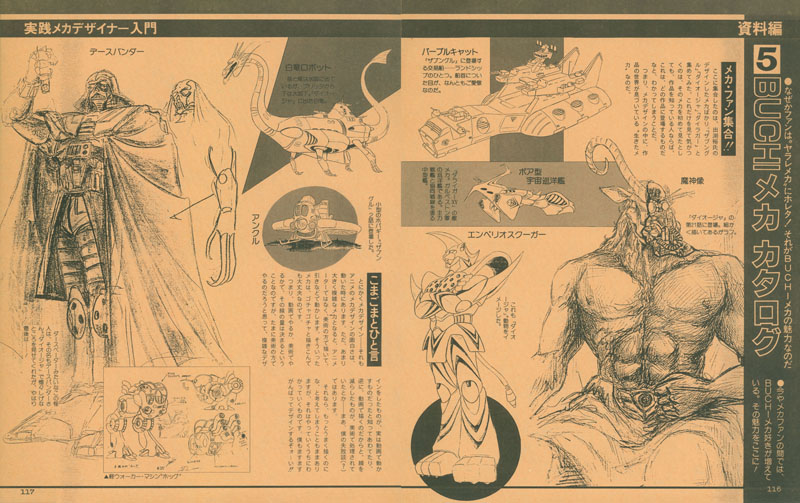 Going from fan to pro, two who now are now active talk about their work in mecha.

The writer of this project invited the young designer Yutaka Izubuchi and Shoji Kawamori of Studio Nue; their mechanic talk begins!!

Mr. Shoji Kawamori is a designer from Studio Nue. He played an active part in mecha design for Fighter Gordian and Gold Lightan. Spaceships and robots in particular have a lot of fans. Now, Mr. Izubuchi and Mr. Kawamori talk about mecha design. 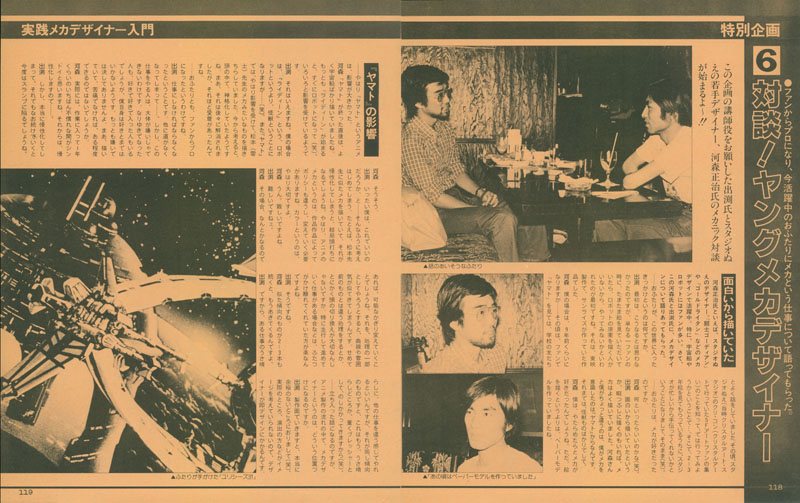 Interviewer: What was the opportunity that lead you into this world?

Izubuchi: At first, I didn’t think it could happen, but I happened to see pictures [anime images] when I was just a fan, and because no one drew a draft proposal for a robot, I got the idea at the beginning that I would try it. It was a Toei production made by Sunrise.

Kawamori: For me, it was about nine years ago–I was fan at that time. I watched Yamato and talked about it with my friends at school. Back then, I learned that Studio Nue (then called Crystal Art Studio) held Cry-Con (a meeting of SF art fans held by Crystal Art), and decided to check it out. There, while showing them 2-3 years of drawings [Translator’s note – this could refer to 2nd and 3rd year school drawings], they said they were really busy at the studio and asked if I could help out. The rest is history. (Laughs)

Kawamori: What can I say? (Laughs)

Izubuchi: I drew what was interesting to me, and I drew to kill time, so I often drew mecha. It was slightly different for me than Mr. Kawamori. I was made aware of mecha by Yamato. Before that it was just kaiju (giant monsters).

Kawamori: I think it’s pretty safe to say that I liked mecha. However, I made paper models rather than drawing pictures.

The impact of Yamato

Interviewer: The anime called Yamato had a big influence, after all.
>
Kawamori: Immediately after Yamato finished, I only drew space ships. But when Raideen started, I immediately switched over to robots. (Laughs) I was affected in various ways.

Izubuchi: In my case, rather than the robot called Raideen, it was kaiju… (Laughs) Also, still under the influence of Yamato, I started drawing scattered mecha like that of Leiji Matsumoto. Thinking back on it now, it was deified in my mind. Well, it eventually faded, but that’s how much I loved it then.

Interviewer: Both of you went from fan to pro.

Izubuchi: Well, I had to find a job, and no other paths were presenting themselves. The thing is, most people who do this job don’t like it and end up hating it. Even the ones who do get good at it, while I’m sure there are those who get into it and just love the hell out of it, I personally don’t seem to be one of them. But then, I certainly don’t dislike doing it. Well, I suppose there’s a certain amount of suffering one must endure as an artist.

Kawamori: In point of fact, that first year when I started doing this and was least experienced, I think I wore myself to a frazzle. After that, it just kind of became a chronic condition…

Izubuchi: Although if it really becomes a chronic condition, if you keep on doing it, you could fall into a slump. 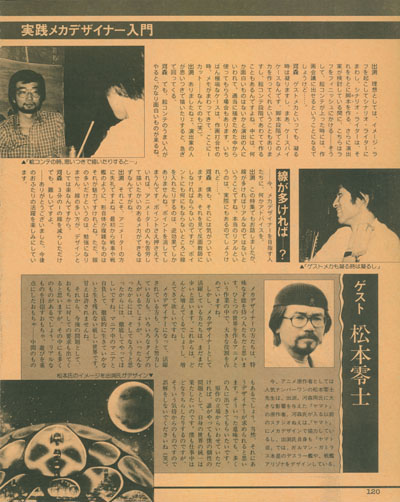 Izubuchi: Am I really any good at this?–I start to think like that. For example, when I draw mecha similar to Mr. Matsumoto’s and it becomes chronic, I reach the limit, after all. It is necessary to change it. After all, flavor is important.

Kawamori: In that case, if it gets like that, I change as much as possible. If you try to process it like that, curves and atmosphere will become alike. At the very least, it’s important to treat it differently than the previous versions, to somehow change it over in your head. For example, when there is work that proceeds simultaneously, it is easier for the two to be widely different.

Kawamori: If I get two or three in a row with similar trends, I get bored.

Izubuchi: Therefore, to get a clean break from a project, it’s best to do something that’s different from other work. If you do the same sort of thing, it starts to weigh on you and you want to clear your head. (Laughs)

Interviewer: I don’t mean to interrupt, but what is a mecha designer’s position in the flow of anime production?

Izubuchi: On the production side, you really don’t have much leeway to work with. (Laughs) As a matter of fact, when the director thinks of an image, the designer starts designing immediately.
Izubuchi: Ideally, I make an image rough and turn it over to the script writer, and he bases the script on it. While the director is thinking further about it, a finish is applied to the rough–and by the time storyboarding begins, it is expected that the drawing can be presented in a meeting.

Kawamori: Even if it’s a guest mecha it can be elaborate, it’s case by case. I may be told to make up this mecha from the script stage, or make it up in a hurry at the storyboard stage. During that, the production people might say, “Do you have something interesting for us?” in which case I have to use something appropriate from the backlog of stuff I’ve drawn. The most extreme case is when a memo goes around in an animation meeting and it says, “Put something in this shot.” (Laughs)

Izubuchi: That has happened, huh? If an animation director has to draw it off the top of his head, it comes around in a hurry.

Kawamori: But if a storyboard is drawn by someone good, some really interesting things can come out of it.

What if there are many lines?

Interviewer: Now, give your advice for those aiming at becoming a mecha designer.

Izubuchi: I talked about it for this feature, but if there are many lines, it means it isn’t real. True “realness” has a practicality to it, as well…

Kawamori: I notice it, too. Well, I suppose you have to learn by seeing bad examples, but putting lines in when there’s no point to it has the opposite effect. It obscures the point. And if you hold the point back, it results in a mecha that the animator has to struggle to draw.

Izubuchi: It is inconsiderate toward an animator. When you start out, there’s an appeal to complex forms themselves, like tanks and battleships. But just putting lots of lines in doesn’t let you learn. People who put in lots of lines do so because it makes designing it easy.

Kawamori: It’s difficult to reduce the lines by even one third.

Interviewer: Thank you very much. I look forward to the activity of you both in the future. 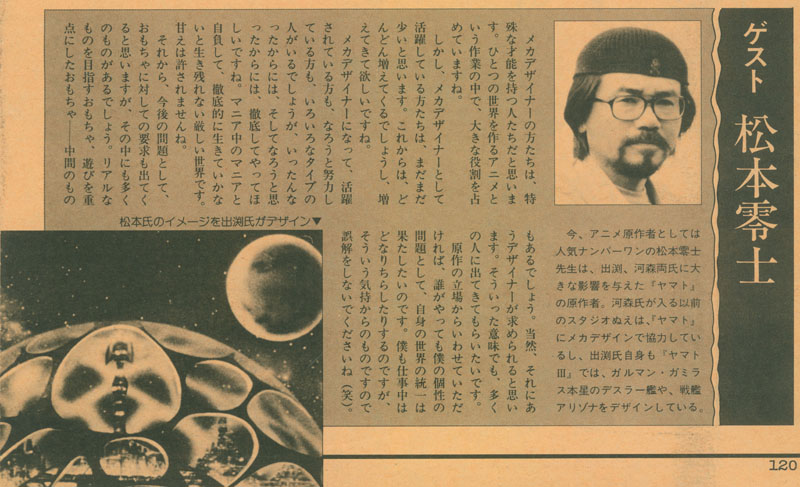 Now, the anime creator with number one popularity is Leiji Matsumoto, who had a major impact on both Izubuchi and Kawamori as the author of Yamato. Studio Nue, where Mr. Kawamori works, participated in the mecha design of Yamato, and Mr. Izubuchi himself worked on Yamato III to design Dessler’s ships for Galman-Gamilas and the battleship Arizona.

I think that mecha designers are people with a special talent. They have a big role in the work of creating a world for anime. However, there are still very few playing an active role as mecha designers, and I hope their number will steadily increase from now on.

I’m sure that there’s all types who would become mecha designers, people who’d make the effort and do the work. Those who are doing it or are thinking of doing it, I hope you do it thoroughly. Take pride in your mania, since this is a harsh world where you can’t survive unless you make a thorough living. Dependency is not tolerated.

From there, as to the problems that come, while you may think that you’ll be asked to make toys, there’s a wide range of things involved with that. Toys that aim for realism, some where playability is the key point — and some which are midway between the two. Of course, a suitable designer is required. I want a lot of people to come out to work toward the meaning I said.

If I may say so as a creator, it’s a matter of my personality that I want to achieve a unified world of my own. I rant and rave while at work, but because it arises from such a feeling, please don’t misunderstand. (Laughs)