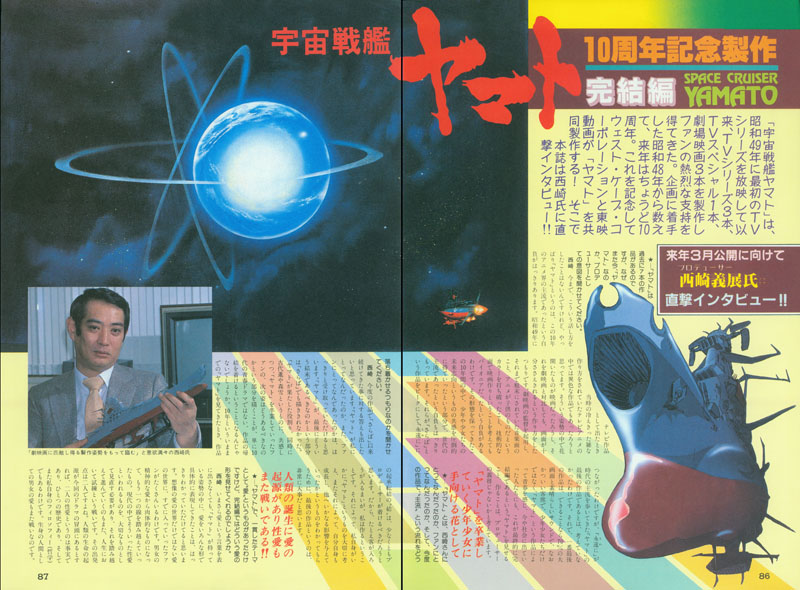 Since the first Space Battleship Yamato TV series was aired in 1974, three TV series, one TV special, and three feature films were made, and gained the ardent support of the fans. Counting from 1973 when planning started, next year will be the tenth anniversary. In commemoration of this, West Cape corporation and Toei Animation are co-producing a new Yamato! This magazine brings you a direct hit interview with Mr. Nishizaki!

Toward a March release next year

Interviewer: There have been seven Yamato works in the past; please tell us why you’re making another one, and also your intention as a producer.

Nishizaki: I haven’t talked about this until now, but after all there is clearly pride that the anime world entered the mainstream over the past decade. I think it was unique as a TV production among the somewhat crudely-produced television anime that was coming out back in 1974. The attitude at the time was to save the fancy work for movies, but we were making it with the intention that visuals would hold up, even when compared to theatrical features.

Feature film directors had neglected the music side before then, and the notion was smashed that anime was just for children, so there was a point of pride in being a pioneer on the technical side of filmmaking. As I kept that form over the past ten years, it earned the appreciation of forward-thinking boys and girls, so there’s also pride that it became a mainstream generation.

Farewell to Yamato was a peak that later lead to Be Forever Yamato, but I didn’t think Be Forever walked enough in the mainstream of the times to be the last work of Yamato. So after the first stage of the work, if we’re able to make it with great sound for a big 70mm screen, it won’t be just boys and girls who feel the youth of Yamato, but also those who have gone on to enter society. This is being made as the final chapter of Yamato. I think that’s my duty as the producer.

A tribute for boys and girls graduating from Yamato

Interviewer: What was Yamato to you and the fans, and please tell us how you intend to settle into the “mainstream.”

Nishizaki: I want to give an answer to something that has continued with the works after Farewell. Was Yamato for me, or for the fans? I think you can understand it clearly.

As far as the part of how I should finally conclude Yamato, not even Farewell depicted it satisfactorily. What role was Yamato to accomplish, and at the same time how was I to present the next form of these people Susumu Kodai and Yuki Mori in a sympathetic way to the fans who’d graduated from Yamato? Not simply as a teen drama, but appending it to the conclusion of the work as a whole?

Looking back on the previous 10 years of Yamato, I feel that for the work’s classic dramatic structure of introduction, development, turn, and conclusion, the “conclusion” part is something that I as the producer have to attach to it at the very least. So, whether I get the audience to go along with it or not, I’m the one making it.

Because of that, it’s vital for me to consider what Yamato is to me personally, how that’s helped me to grow, and to understand how it affected other things for me, so it’s extremely important for me to think about what this final work is going to be.

The birth of human beings is the origin of love, and love is also a battle!!

Interviewer: The theme that is consistent throughout Yamato is love, so what form of love will you show in The Final Chapter?

Nishizaki: Even if I don’t put the word love on the table, I think you can clearly understand that Yamato‘s attitude has always been to express love in various specific forms. Many fans have already entered the world of love, which is not just a world of imaginary love. When the spiritual love of a man and woman becomes physical, it steps over another line.

What we call sexual love in the modern age is an important thing that is necessary to examine as we step over the line and continue to advance in the battle we call the trial of life. The starting point is two people. Supposing that the origin of human life is the beginning of this story, the sexual love of two people is a fact and part of history, and that’s my personal philosophy as well. The love of men and women as flesh-and-blood human beings is also a battle. 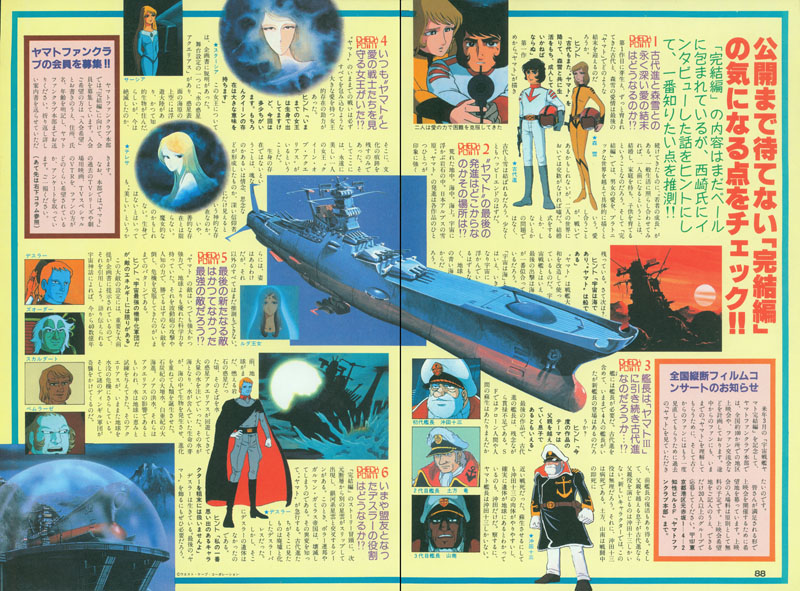 Checkpoint for those who can’t wait for the premiere of The Final Chapter!!

Although the contents of The Final Chapter are still veiled, we can guess at the story based on hints that came out in our interview with Mr. Nishizaki!! What happens to the long, deep love of Kodai and Yuki turn out in the end!?

Check Point 1: The cherished love between Kodai and Yuki sprouted in the first work. What kind of ending will it reach in the last Yamato?

Hint: “Kodai steps off of Yamato, since he must come of age and have a life with Yuki.”

The “growth of young people” is something Yamato has continued to depict since the first work. In general terms, becoming full-fledged means marrying, having a family, and raising children. As for the love between man and woman, in The Final Chapter, I can say that we depict it specifically crossing the line beyond platonic. Although loving each other may be a kind of battle, it is a lie if there is no exchange of courtesies in the world of two people. It’s not a problem if there is a wedding ceremony or not, Kodai and Yuki will be connected. There should at least be a happy ending.

Check Point 2: Where is the place Yamato will launch from!?

A strong impression remains from each of Yamato‘s launches; the rough underground, under the sea, on the ocean, rocks floating in space, and the snow of the Japan alps. What’s next?

Yamato is the remodeled Battleship Yamato. Although it is a space battleship, the sea is probably most suited for its final launch. Although “space is a sea,” it shouldn’t appear suddenly in space, so it will be from the blue sea on Earth.

Check Point 3: Will Susumu Kodai be the captain of the ship following Yamato III!?

A warship needs a captain. Together with Susumu Kodai, there have been four captains, but will a new one appear!?

Hint: “It can be said that the theme of this work is the son surpassing the father.”

Unfortunately, the dignity of the ship’s captain was insufficient in Kodai. Because human cloning and resurrection is natural in SF, the revival of the former captain is possible. And if Kodai plays the role of the son, the father could only be Juuzo Okita. This role would be impossible for a new character. Also, Juuzo Okita’s death was from illness. Hijikata and Yamanami were killed in battle. It’s easier to resuscitate the body of Juuzo Okita, and it is known that Okita’s remains are on Earth. The captain of Yamato can only be Juuzo Okita.

Check Point 4: Is there a queen who watches Yamato and the soldiers of love!?

In the Yamato stories up to now, there has always been a queen who helps Yamato, and an all-encompassing love.

Hint: “Up to now it has always been a flesh-and-blood queen, but this time it’s a little different. Of course, the existence of the queen has a big meaning.”

There is a word about this queen in the proposal book. One of the stage settings is the “water planet of Aquarius” with a floating continent over the surface of its planetary ocean. It seems that intelligent life once live there, but it is now extinct and left only a trace of its culture. Here dwells the beautiful “Queen of Aquarius” for eternity. This would be a spirit rather than a flesh-and-blood presence, and we can speculate that her divine existence can only be seen by deep believers. No, this is not necessarily a good existence. It may be a witch. Although it is not a living body, it is described as “beautiful,” but we can only guess at this point.

Check Point 5: The final new enemy will be the strongest and most powerful!?

Yamato‘s enemies are always strong and powerful with science superior to Earth’s. It is a conventional pattern to overcome a crisis by defeating a formidable enemy with the power of human intelligence and the Wave-Motion Gun.

Hint: “Although it is the strongest army in space, the enemy’s energy is limited.”

Since the main premise for this powerful enemy is shown in the planning book, let’s quote it. According to space myth handed down over 4 billion years, when Earth was still a burning planet of rock, the water planet Aquarius passed close by and poured a large quantity of water on it. This became the sea, and the buds of life in the water caused biological evolution that lead to the birth of the human race. The great flooding of the Carboniferous period, the large marine transgression of the Cretacious, and the flood of Noah; they were all said to be the influence of Aquarius. Its water gave both blessings and trials to Earth. The water planet Aquarius now poses a risk of flooding again, and the mysterious Dengil army makes a surprise attack.

Check Point 6: What is the role of Dessler, now a sworn ally!?

At the beginning of the story in The Final Chapter, another galaxy slips through a dimensional fault and there is a scene where it collides with the Milky Way. At this time, the Bolar Federation and the Galman-Gamilas Empire are completely destroyed. The accident is known, and Yamato rushes there. Kodai sees Dessler’s palace in ruins. However, the body of Dessler is not there.

Hint: “I would not treat my most memorable character carelessly.”

Dessler is alive. It is necessary to give glory to the last Yamato by all means.