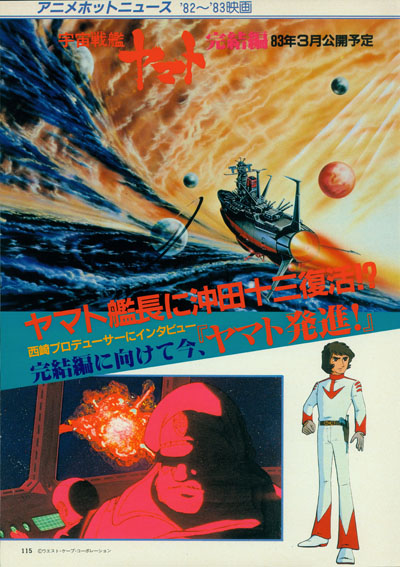 An interview with Producer Yoshinobu Nishizaki

Now, toward The Final Chapter,

We interviewed Mr. Nishizaki about the highlights of Yamato‘s Final Chapter.

The starting points of animation are picture and music.

Emotions are conveyed by images on a plane and lyrically by music.

Yamato has made many first-time achievements, and when talking about animation over the last ten years, Yamato cannot be left out. It brought what is called drama to animation. It is said that the origins of animation are image and music, so music is important. After all, if the picture is one half, then music is the other half. Up until now, how much has it been saved by music?

Although a variety of big hit animation works comparable to Yamato have been produced, its music is absolutely unrivaled.

This time there are themes for Aquarius and Dengil that were done prior to the script, but as for the future, more music will be made in November. In addition, before the movie is released to the public, an overture different from a soundtrack titled Space Battleship Yamato Final Chapter Suite looks back on the last ten years. Though it is completely classical in nature, it makes for a tenth anniversary symphony that is intended to bring closure to the music. 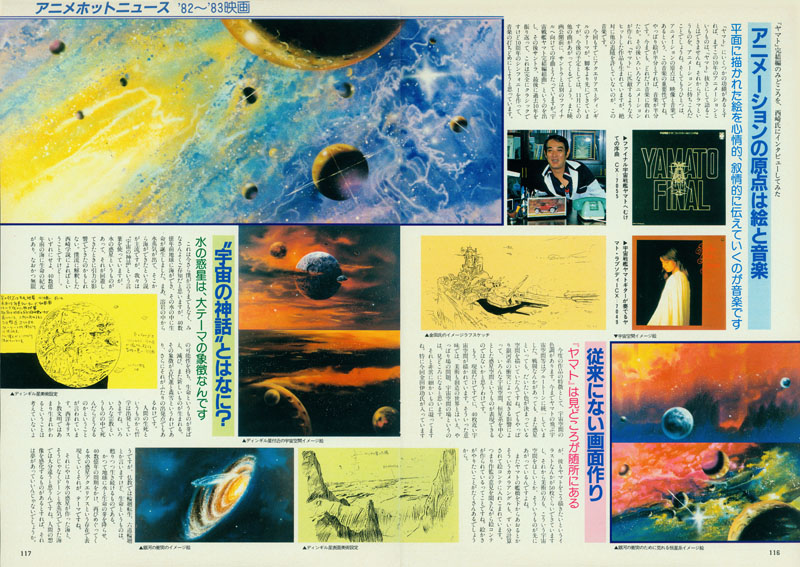 The making of unprecedented screen images

As a feature of the work this time, there is a color tone for space itself. Up until now, the space Yamato flew through was unified by a blue tone. Whether in battle or on a planet, that was the general color. But due to the effect caused by a collision of galaxies, the thought is that it’s not possible to represent the whole of space by focusing on a single planet in a solar system.

Already, we now have nearly forty paintings of space. By the meaning I’ve mentioned, while it’s part of the world of art and creation, it becomes a question of place. The place that is “space” becomes a highlight in and of itself. It is very finely elaborated. Also, Mr. Yoshinori Kanada in particular has done about 50 illustrations this time for how he wants to show Yamato. Knowing how he wants things to look, the artists bring them to the forefront from there.

Moreover, camera angles that emphasize Yamato‘s bridge from underneath have been worked out and included in the storyboards. In other words, storyboards are being made with the direct input of the supervisor because there are many things the artist wants to do. 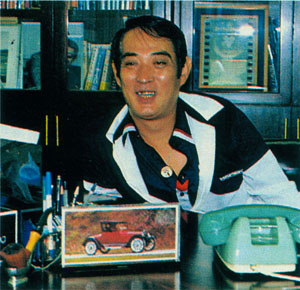 What is “the Myth of Space”?

The water planet is the symbol of a major theme

Needless to say, I think everyone should already know well that life on Earth was born in the sea about 4 billion years ago. There is a mainstream theory that the sea came from water vapor in lava, but in the so-called “Myth of Space,” there is a planet of water that may travel under the influence of gravity. This is according to the “Nishizaki theory” that I have expressed in my own style.

In any case, the era of life in the sea began 4 billion years ago. Seeds of life carry infinite potential. Some die while others are born. The symbol is Susumu Kodai and Yuki Mori, and it is also the starting point for these two.

The philosophy departs from what is called the life and death of humans. A variety of things are taught about what happens when you die. Although Christianity in Western Civilization does not much consider reincarnation, the subject of transmigration flourishes in Buddhism, and the thing called life is continuous.

This theme is expressed in the existence of the water planet Aquarius, which orbits continuously. It brought water and the seeds of life to Earth 4 billion years ago, and now it comes again. It could also be that the sea of the water planet is very different from a sea made by water vapor. If anything has an influence on human imagination, it must be dreams. 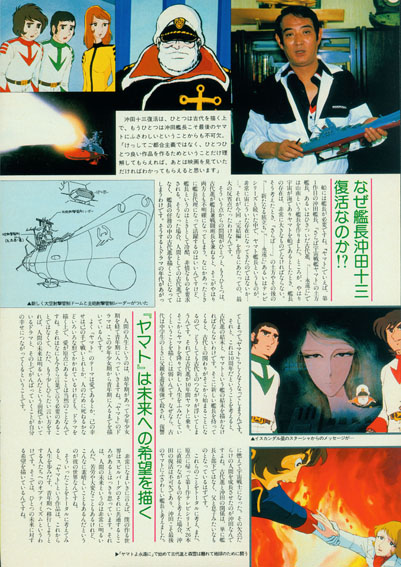 Topmost Caption: One reason to resurrect Juuzo Okita is to define Kodai, and another is that Okita is essential as the last captain suitable for Yamato. “Rather than opportunism, I want people to understand that it is for the good of the work, and I think you’ll understand after seeing the movie.”

A ship requires a captain. In terms of Yamato, there was Captain Okita in the first story, Captain Hijikata of Farewell, the succession of Kodai as captain, and Yamanami, who was made captain in Be Forever. However, when we say that space is a sea and Yamato is a ship, the presence of a captain is a major thing. When considering that, while there were other captains such as Hijikata and others, a Yamato captain has very much an ethereal existence. When making The Final Chapter, this was a maximum point of reflection.

That is a problem from one perspective, and another is that it is still unclear whether Kodai serves as the captain or the combat group leader. Although it was good for him to become an acting captain and play an active role, a captain must occasionally be ruthless and coldhearted. In that case, Kodai would be depicted as having the duty of a captain instead of a human being. Then the generational age of the story would rise, and it would stop seeming like Yamato.

[Translator’s note: it is particularly interesting to consider this point in light of Kodai’s full captaincy in Yamato Resurrection, which overwhelmingly appealed to older viewers.] 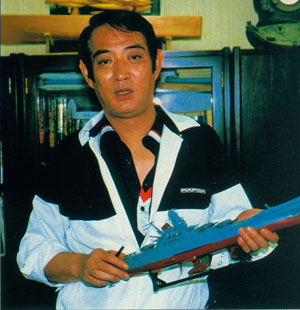 Considering that this is the 10th anniversary, a conclusion must be presented for Kodai and for the ship called Yamato. If a new captain was brought in, his relationship with Kodai would start from there and the connection would inevitably be weak. After ten years for them both, it would be insufficient to show Kodai stepping off Yamato and starting a new life.

Because his parents were killed by a Planet Bomb when he was the age of the junior high student, he burned with revenge and became a space soldier. It was Okita who brought him up from a flawed human being. The relationship of Okita and Kodai is not just captain and subordinate, it is like a father and a son.

Thinking about these things in total lead us back to the starting point of the first 26-episode TV series, and the revival of Okita as the last captain suitable for Yamato was essential.

Yamato depicts hope for the future

In a human life, boys and girls advance from childhood to adolescence. The story of Yamato has depicted this period of life for boys and girls.

Yamato‘s theme of love has been shown in a variety of forms, such as fighting for one’s own happiness or sacrificing oneself for another, but it is natural for love to be the origin of the story. It isn’t necessary to put it into words, but if it were to be described further, the story is written on the well-known premise that the future of humans is bright, and doing one’s best leads to further happiness.

Putting it more boldly, the world which I make has a lot in common with that of Spielberg. There is a bright future for human beings. There may be great difficulties, but there are also great possibilities for a wonderful world. If you think about the works of Yamato in total and begin life from here, there is great optimism toward those moving into adolesence. This is how I depict hope for the future. 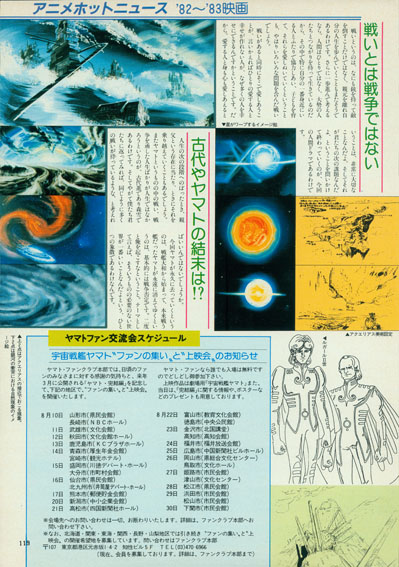 A battle is not a War

A fight is not just the defeat of an enemy with a gun, it can also be leaving home in order to find one’s own life. If you think a step further, human beings are not alone because they live in connection with a large number of people. They cooperate with one they are closest to in particular in raising and loving children, but they can still fight over various issues.

In other words, two people can love each other even if there is a battle, and if they can create happiness with someone they love, they can make many other people happy. Loving someone with your body and soul is very important and your greatest challenge, and examining that is the point of the story this time.

The end of Kodai and Yamato!?

When one reaches the next stage of life, sometimes it means that you need to overcome a father figure. A life of battle and war on Yamato is not an appropriate life for Susumu Kodai and Yuki Mori. And so, eventually, when we try to take it back to you, perhaps it’s best to think of it as many battles lying in wait.

The fact that Yamato departs for good this time comes from the original battleship Yamato, which fought in a naval battle and disappeared forever, so it is basically a denial of war. Do not awaken it again. If I were to describe the theme in one symbol, it is that the best world is one in which war is unnecessary.

NOTE: the blue box in the lower left corner of this page is a listing of the “Fan Gathering” events that took place during the month of August 1982. They are covered in greater detail elsewhere.