The next morning, we waited for two things to open: (1) Cafe du Monde, for breakfast; and (2) the desk at the JR Ticket Office which would issue us our Japan Rail Passes. We decided to take care of business first, so we briefly exposed ourselves to the heat and humidity while we went to the ticket office. Some forms and formalities, and our JR passes were issued. We had ordered Green passses, which gave us access to first class seats that generally have the easiest egress from the platform, and we booked our first two outbound trips: both Monday’s and Tuesday’s 7:20 Hikari service to Hiroshima. Business taken care of, it was breakfast time.

The initial plan was to head to Toji Temple, just southwest of the station, and then make our way to the Umekoji Steam Locomotive Museum, which going by the map was a short walk away. The Steam Locomotive Museum runs steam train rides three times a day, and our hope was that we’d make the first one just after 11.

We jumped on a bus for Toji Temple first. In what would become a key thing for the first two or three days, we underestimated how long it would take to get there, and by the time we got near the entrance, we decided to forego Toji and continue to what we thought was the Steam Train Museum. Alas, we jumped off a few stops early, ignored the giant hobby store across the road, and made our way to the park where the locomotive museum awaited us.

We got to the entrance and a friendly traffic guard asked us if we were headed to the museum. In spite of the language barrier, we set off in what we thought was the right direction, looking for the right-hand-turn the guard suggested, only to arrive at the Kyoto Aquarium (which was packed, like everything else during the Obon week). We backtracked and realised where we should have turned. There was our destination, in plain sight. Then, our first pleasant surprise of the trip, which had me walking ahead toward something that caught my Matsumoto-fanboy-eye. 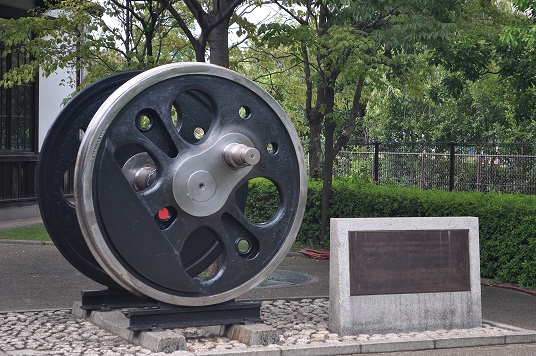 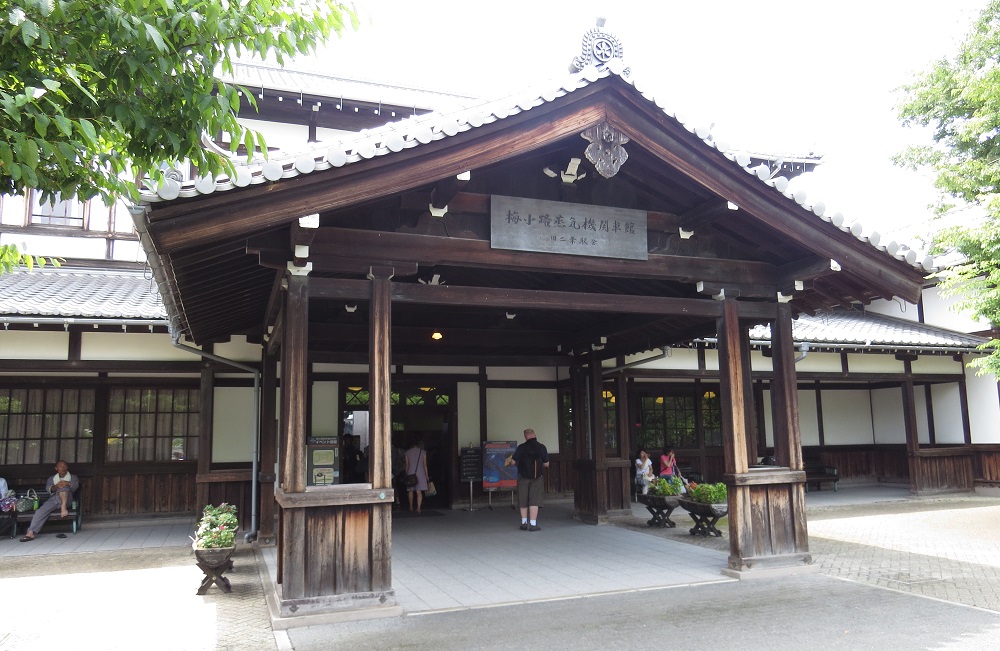 The entrance to the Umekoji Steam Locomotive Museum. This building is the former Nijou Station. This picture was taken by Terry, as something had caught my eye and I impetuously ran ahead… 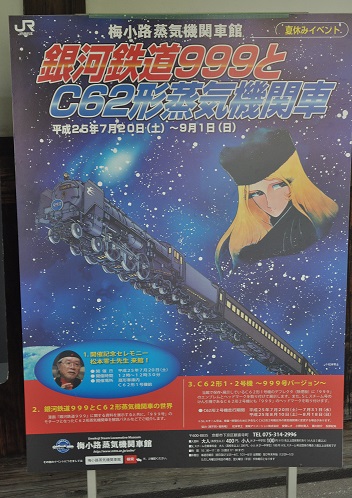 … to get a closer look at the sign advertising
the Galaxy Express 999 exhibit contained within!

Our first piece of good fortune. I had always planned to visit the Umekoji Steam Locomotive Museum while in Kyoto, because both my father and I have a love of steam trains. Thus, the sign I saw was a very pleasant surprise. A Galaxy Express 999 exhibition awaited along with the rest of the museum!

We made our way inside, and in what would become a 50%-of-the-time scenario, bought our admission tickets from a vending machine…then handed them to the ticket staff less than two meters away!

The first thing I did was scan the main foyer, as it also was part of the museum, and aside from the racks of souvenir gifts and toys, there was much to see in the main building. English language labeling and narration was everywhere, so there were no language barriers in the permanent display.

We found the engineer’s section of a steam train, which you could climb into and see the various inner workings. A number of displays showed things such a coal shoveling practice machine, the details of which explained how much coal needed to be shoveled on a particular train type to move it a certain distance. The effort required to move a train a short distance was phenomenal – 40kg of coal (20 shovels full) would only take you a single kilometer!

Also on display were an illustration of the mechanics behind how a steam engine generated power to move, a number of train models, and the tools of the engineer’s trade during the late 19th/early 20th century.

On the other side of the building there is a full-size, old-style timber ticket office (above left) containing numerous uniform and equipment pieces; a scale model (above right) of the locomotive house. The turntable used to turn the trains toward the various bays of the locomotive house was amongst the train models from around the world (below left). In addition, there was a display showing fittings for the Imperial Train – the personal train of Japan’s Emperor (below right).

At the back wall on this side was the Special Exhibition area – the Galaxy Express 999 Exhibition! It contained memorabilia of various types, from a complete set of the manga to figures of the characters and models of the Three-Nine, whose physical appearance was based on the JNR Type C62 locomotive. Side-by-side they had the name plaques of the Three-Nine (produced especially for this sort of exhibition) and the Tsubame (Swallow) service, which the C62 class offered in the day, and is what inspired 999. 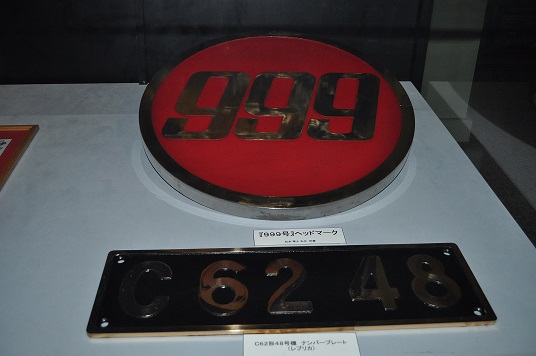 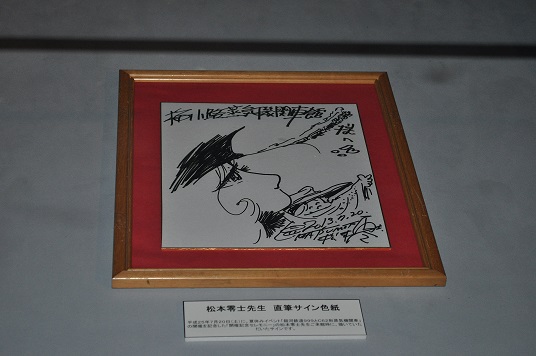 The Three-Nine nameplate used on trains taking on the role,
along with the model plate for C62 number 48, the model
plate adorning the 999.

A cartoon of Maetel and Tetsuro with the Three-Nine in the background. Drawn by Leiji Matsumoto on the 20th of July (the opening day of the exhibit). 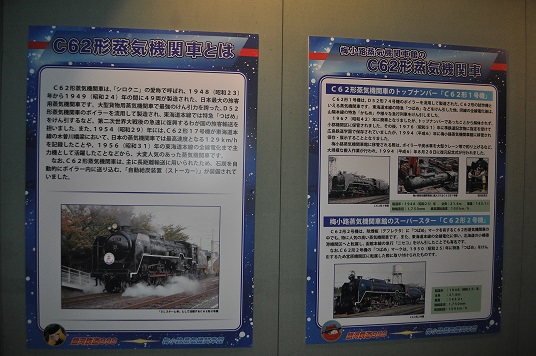 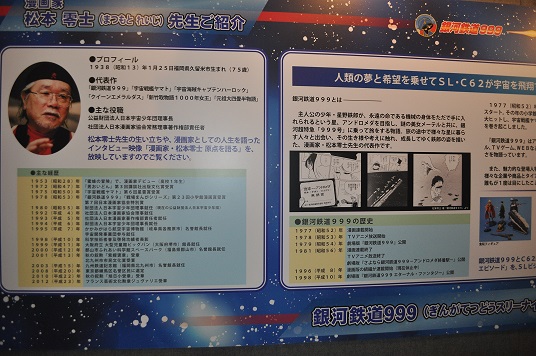 Posters explained the history of the C62 locomotive, Leiji Matsumoto and Galaxy Express 999 (above). A design book (below left) shows a foldout with a detailed design drawing of the Three-Nine, with a schematic of the C62 for comparison. In the next room, a diorama was set up with Maetel, Tetsuro, and the Three-Nine’s conductor. I couldn’t resist getting a photo with Maetel (below right). 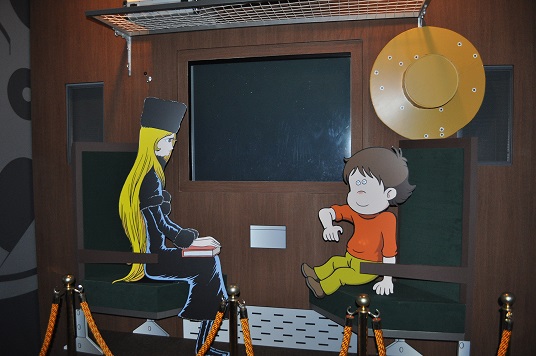 The adjacent room contained a looping video documentary of Leiji Matsumoto, a glass case containing the entire collection of 999 manga (which was photo-prohibited), a mockup of the reactor of the Three-Nine, and a viewing theatre which had Maetel and Tetsuro looking out the “window” (left). Unfortunately, whatever video had been playing had just finished, and from then was on an infinite loop of passing the planets of the Solar system. 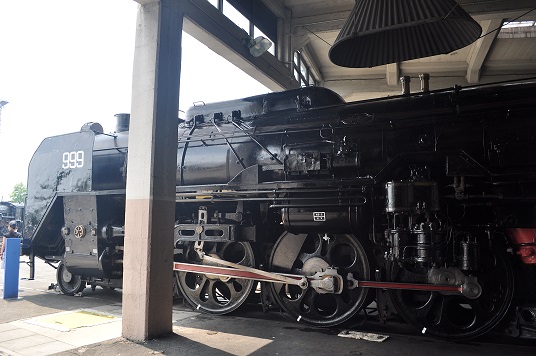 Having seen everything there, it was time to move out into the main locomotive house, full of old steam trains of various eras. Spaces were filled with miniature dioramas and model train sets that replicated Kyoto. However, the first thing that caught my eye was C62-1 – the first C62 engine built. That wasn’t where the fun ended though, because as I traversed its side, I saw that it had been temporarily christened the Three-Nine!

From here, we got a good look around the turntable area and got to see all of the various trains, mostly steam engines, one of which was made up in the guise of the Imperial Train. For all I know, it might have been a retired Imperial Train, but I couldn’t confirm it. 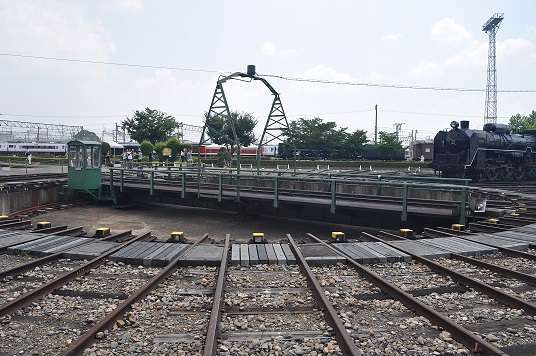 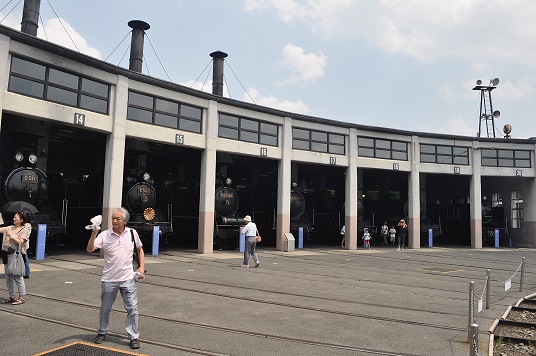 One last photo opportunity remained, as it turned out. The Umekoji Steam Locomotive Museum does short rides on open-air carriages hauled by its working-condition C62 locomotive, C62-2. Another little surprise: it not only bore the Tsubame swallow logo on its side, but also carried the Three-Nine badge on its front! 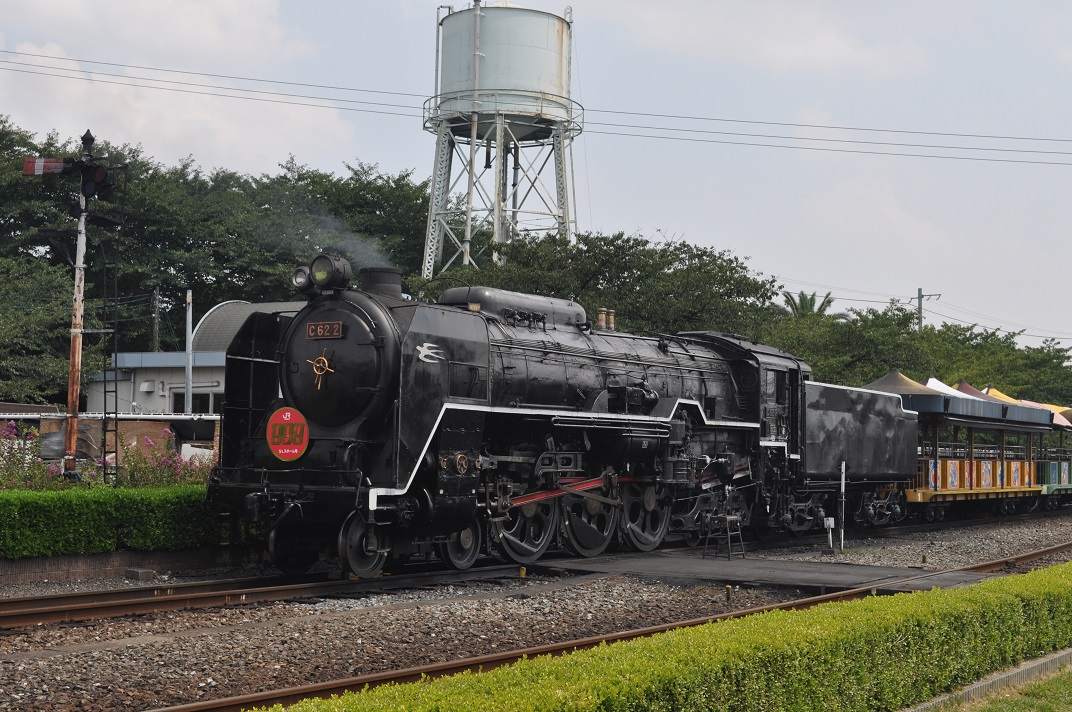 After that, we sought refuge from the insane heat and humidity. We found it in an old passenger carriage loaded up the wazoo with air conditioners! The Japanese are renowned for their recycling habits, and here was one of the most brilliant recycling jobs I’ve seen! We cooled our heels (and everything else) for ten minutes or so before braving a walk through the engineer’s cabins and heading to the gift shop where I bought a souvenir D51 model for my father, and also tried to snag a couple of the 999 fans that I saw being waved around by others. Alas, they’d run out.

Then I found another gem I wasn’t aware of: on weekends and holidays, a direct bus from Kyoto Station will drop you off right in front of the Umekoji Museum and likewise return you there! So rather than the wearying trek back to the nearest bus stop, we instead jumped straight on a bus back to Kyoto Station.

We dropped down into The Cube’s lower levels for a pasta lunch and experienced one of the perplexing things about Japan – no restriction on smoking in restaurants. While many have enclosed smoking areas (mostly chains like Mos Burger, Burger King, and McDonald’s) many others have no reserved smoking areas and patrons can light up wherever they please. That was the only really irritating thing about the whole trip, so I guess it could have been worse.

Continue to Part 3: Sanjusangen-do and Kiyomizu-dera