Since it is Yamato after all, the hurdle was raised in order to show things that went beyond the fans’ imagination. 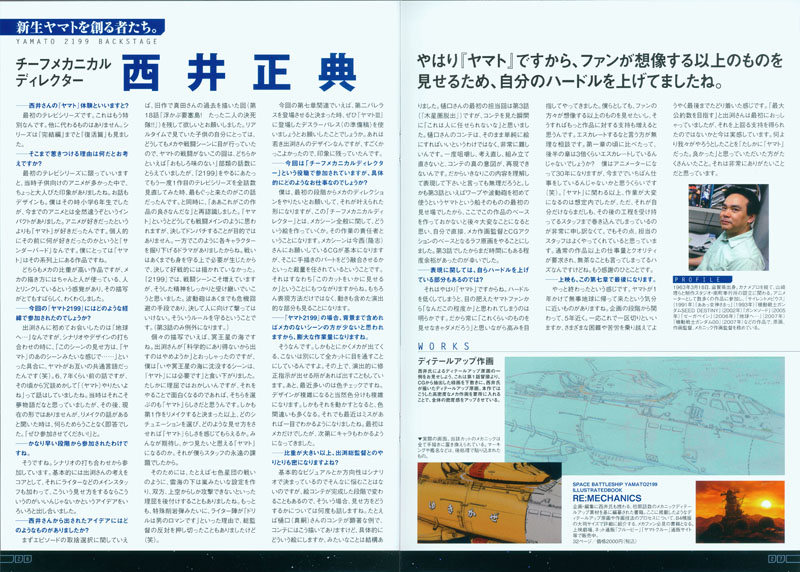 Translated from the Yamato 2199 Chapter 7 program book. See it from cover to cover here.

Interviewer: What would you call your Yamato experience?

Nishii: It was the first TV series. It’s very special. There’s just no substitute for it. I watched the whole series up to Final Yamato and Resurrection. 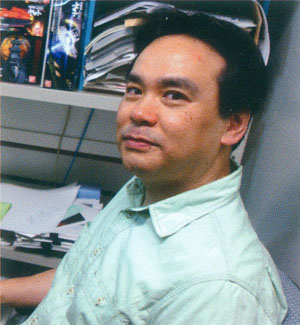 Interviewer: What do you think is the reason for its appeal?

Nishii: Speaking only of the first TV series, at the time anime was for children, and it gave the impression of maturing a little. The story and the design. Although I was a 6th grader in elementary school then, its impact was completely different from conventional anime. I liked anime, but I liked Yamato more. If you asked me what I personally liked before that, it would be Thunderbirds. Yamato was the work that did it for me.

Although it had a high proportion of mecha, and staff who knew how to draw mecha properly, there was also a sense of connection with people. The presentation was wonderful and exciting.

Interviewer: How did you come to participate in Yamato 2199?

Nishii: I first met Mr. Izubuchi when we worked on Toward the Terra, and when we had a script or design meeting, he would say, “this scene should have the feeling of that scene in Yamato…” and so on, so Yamato was our common language. (Laughs) Six or seven years ago, we joked that “we want to do Yamato.” We thought it was just a pipe dream at the time, but then when I heard talk of a remake, even though it wasn’t in its present form, immediately and without hesitation I said “please let me participate by all means!”

Interviewer: You participated from quite an early stage.

Nishii: That’s right. I joined at the script meeting stage. The basic idea of Mr. Izubuchi was set at the core, and the main staff added to it, such as the writers, and we gave various ideas for how it might be good if it were shown a certain way.

Interviewer: What sort of ideas did you have?

Nishii: At first, with respect to choosing the episodes, I wanted to leave out the depiction of Sanada’s past from Episode 18 of the original. For myself as a child who watched it in real time, my eyes were drawn to mecha or battle scenes, and I thought, “it’s no fun this time” if there was no Yamato battle. Although there were a number of episodes in that category, when I reviewed the first TV series again while working on 2199, this is the one that came out most strongly. At the same time, I realized again that “this is what’s good about the work.” It may seem like battle is the main thing in Yamato, but carrying out a war was never its purpose.

On the other hand, there was a story that dug into each character this way because it was necessary to protect all of them in the fight, and it was never presented to be warlike in any way. Although the battle scenes increased in 2199, I thought we should firmly carry on that spirit. To the end, the Wave-Motion Gun should only be used to prevent a crisis, and should never be fired at people. That’s the rule that was followed. (With Episode 3 being the only exception.) 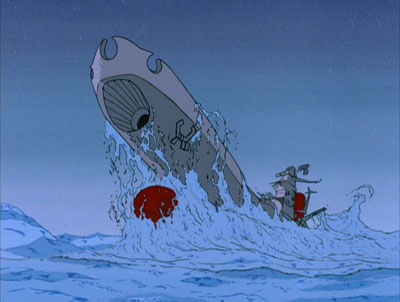 In terms of individual depictions, it was the sea of Pluto. Mr. Izubuchi said, “we should take it out, since it’s scientifically impossible,” but I insisted, “No, the scene of sinking in the sea of Pluto is essential for Yamato.” It certainly seems strange in theory, but I thought it would be interesting to do it, and choosing that would have a Yamato quality. When it was initially decided to do a remake of the first series, we chose which situations to use, we asked how we could show it, and if it had a Yamato quality. Would it be a part of Yamato that everyone expected and wanted to see? That was an eternal challenge for our staff.

To that end, for example, in the battle of the Rainbow Star Cluster, making the setting like a sea of storm clouds underneath gave both sides a reason to attack only from the sky. For the special rock-drilling cartridge [drill missile], the writers overcame the objection of the general director by saying, “the drill is a man’s roman.” (Laughs) 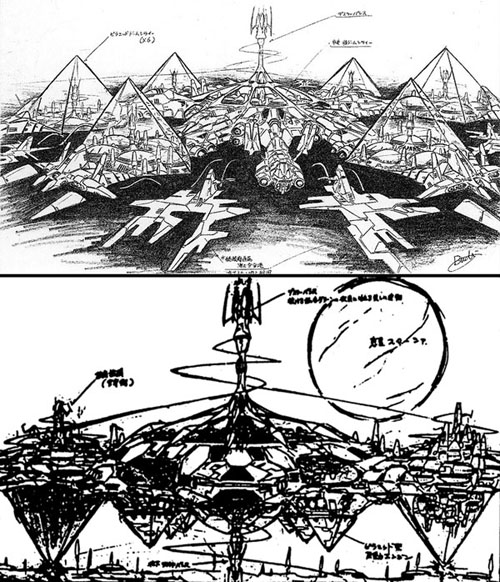 [Translator’s note: the meaning here is that men have a fascination with drills as tools.]

In terms of Chapter 7, when it was decided to have 2nd Balerus appear, I asked if we could use a rough design of Dessler’s palace from Yamato III (at left). It was the young Mr. Izubuchi’s design, but it was very cool and it impressed me.

Interviewer: Your job title was Chief Mechanical Director this time; what kind of work was it, specifically?

Nishii: I asked from the first stage to do the mecha direction, and my wish was granted. With respect to mecha scenes in general, what kind of picture does a Chief Mechanical Director make? It is the person responsible for the work. Although Takashi Imanishi does the CG for a mecha scene, it was my discretion to decide whether to fuse it with the hand-drawn part. In other words, it leads to “how do we show this shot.” Not just the means of expression, but also how to handle it on a production basis, including motion.

Interviewer: Since it seems Yamato 2199 has few scenes without mecha in the background, that would be an enormous workload.

Nishii: That’s right. And mecha comes out anyway, so it was customary for me to look at every shot. On top of that, I looked for places where I could give direction for modifying the production. In addition, there’s a lot of color-checking these days. If a design becomes complicated, naturally color classification will also become complicated. And if it moves, color mistakes will increase. Lately, I can tell at a glance if there is a mistake. Although it was only mecha at first, I’ve gradually come to understand characters, too.

Interviewer: Since there is so much to do, did you closely interact with Director Izubuchi?

Nishii: Because it was decided in the script, basic visuals or direction weren’t so much trouble, but since it could change in the storyboard, we had a lot of conversations about the way to show something. For example, the storyboards of Shinji Higuchi are a remarkable example. Although it was drawn this way in a storyboard, how would we specifically make the picture? There were plenty of conversations about that. 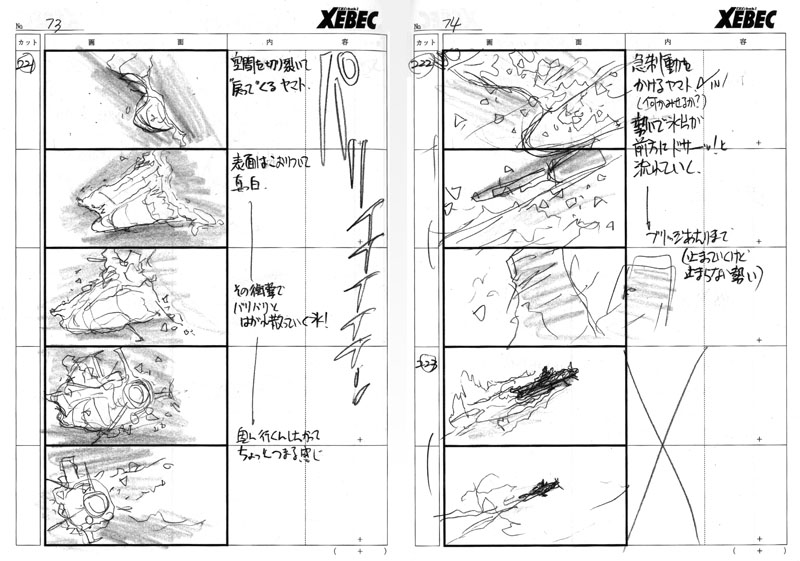 The first time Higuchi joined up was on the third episode [Escape from the Jupiter Sphere]. The moment I saw the storyboard, I thought, “this can’t be done by people.” We couldn’t just use Mr. Higuchi’s storyboard alone to make the picture. That would have been very difficult.

Once we’d bitten into it, we reconsidered and figured out we needed to rework the structure, that we couldn’t reproduce the true intention of the storyboard. So even when we were suddenly told to understand the contents and to please render it, it was impossible.

Besides, since it was a highlight for the ship called Yamato to use the warp and the Wave-Motion Gun for the first time in Episode 3, I thought it would become a serious thing later on if we didn’t lay the foundation here. Directly on my own, I decided to do rough key animation which became the basis for the mecha animation and CG action. It was fortunate that I still had some time to spare, since it was Episode 3. 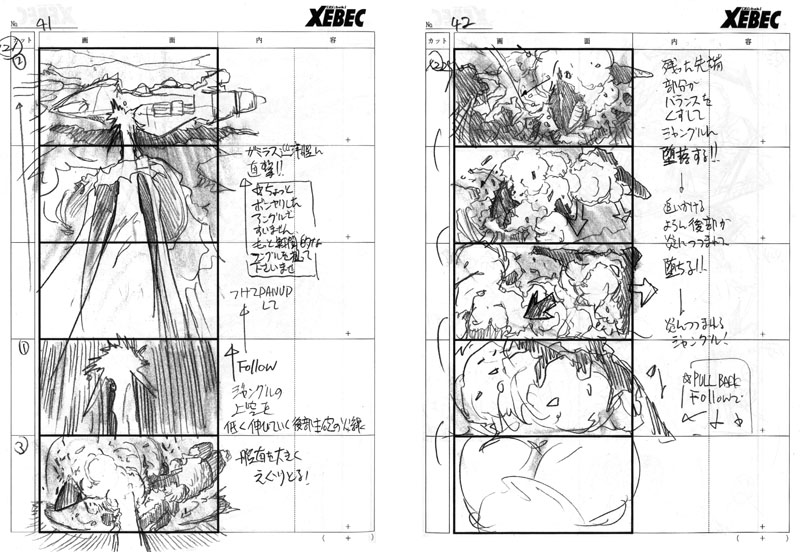 Interviewer: Was there also a part where you raised the hurdle for expression?

Nishii: After all, it is Yamato, isn’t it? If you were to lower the hurdle, it’s clear that the discerning Yamato fan would say, “what’s the deal?” Therefore, we always aimed for the heights and said, “it will be useless if we don’t go this far.” We’re also fans, and wanted to show more than fans could imagine, and I thought support for the work would also increase if we did so.

The idea of not escalating it was an impossible proposition. When you compare Chapter 1 to the second half, doesn’t it escalate to about three times as much? It’s been 30 years since I became an animator, and I think this is the most work I’ve done up until now. (Laughs) I expected that the work would be hard since I was involved with Yamato, but that’s all right only if it’s about yourself. I’m very sorry for how much I had to ask of the staff in the subsequent process.

However, I think that the staff in charge did well. The workload and quality were more than a normal production would require, and I asked for unreasonable things. I’d like to thank them once again.

Nishii: The feeling is that it’s finally finished. It’s like the feeling of Yamato coming back safely to Earth after one year. Since the planning stage, it’s been nearly five years.

While you could say that we’re tentatively finished for now, the feeling is that we’ve overcome various troubles and difficulties to finally arrive at the end at last. Although Mr. Izubuchi said at first, “We’ll aim at the greatest common denominator,” I realize now that we got more support than we might have. Above all, what we tried to do was make you think, “it was surely Yamato; it was very good.” I’m very thankful for that. 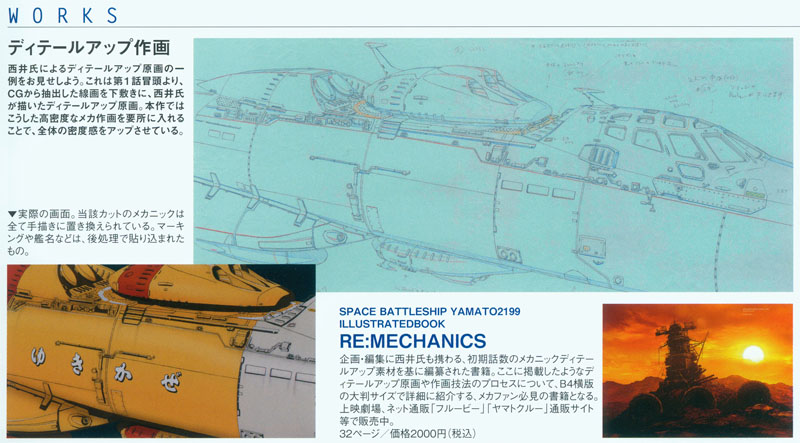 At right is an example of the detailed-up original art by Mr. Nishii. From the beginning of Episode 1, this was extracted from the CG to provide an underlay for the line drawing. The original art was detailed-up by Mr. Nishii. By making a point of such high-density mecha art in this work, it improved the feeling of overall density.

At left is an actual scene. All the mechanic elements in this shot have been replaced with hand-drawing. The ship’s name and markings were added in post-production.