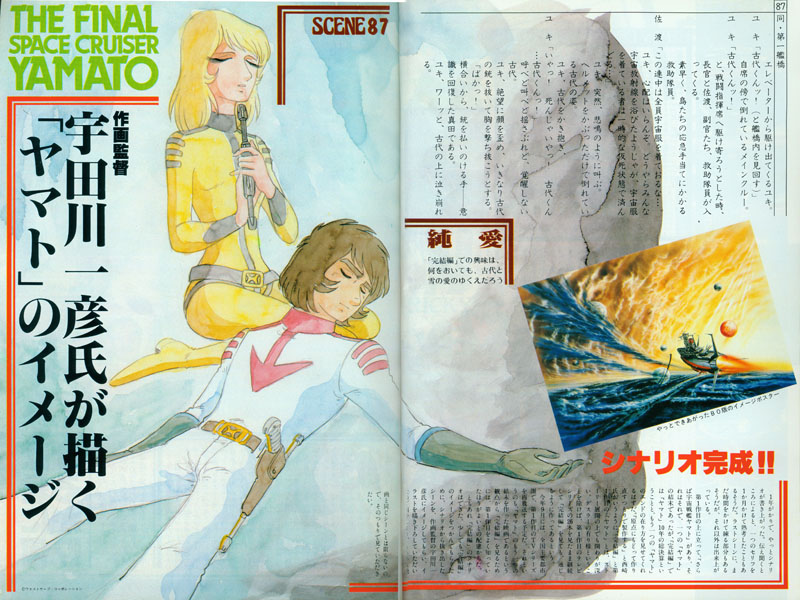 The Script is Done!

It took a year to write the script. According to some, a single line of dialogue was deliberated over for an entire month. Some time is still needed to polish the last scene, but other than that it is complete.

After the first film, Farewell to Yamato was the end of one Yamato. Final Yamato will close the account on the full ten years. Its purpose is to show the end of another Yamato.

“Our intention was to go back to basics,” said Mr. Nishizaki. Its development has a deep relationship with the first Yamato. If Dessler’s part were eliminated, it could be seen as a continuation of the first 26-episode TV series. In September of this year [1983] the first TV series will be rebroadcast throughout the country. It is thought that to view Final Yamato from that perspective will help it to be seen as the end of another Yamato.

At any rate, the script has been finished. To help everyone get a grip on Final Yamato, art director Kazuhiko Udagawa was asked to illustrate some of the scenes. Of course, these won’t necessarily look like the movie scenes, so please keep that in mind. 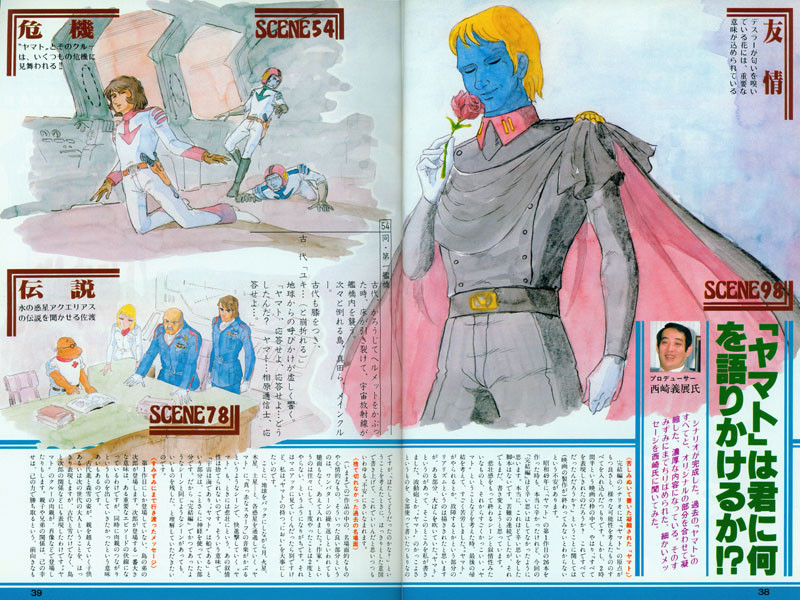 What Does Yamato Say to You?

The Pain of Writing and Condensing Yamato

From the start, I intended to get all the good points of Yamato into the script, but within the framework of a two and a half hour movie we asked ourselves, “is this enough to express it all? Is this everything?”

When producing a film, there is the anxiety that you won’t know if you got it right until the end. Even though it was painful to make the first series in 1974, I don’t think it was as hard as this. I didn’t have any strong feelings about the script in the beginning, and the hardship of rewriting it was continuous. As the poetry and heroism came out in the end, I thought a very cool Yamato was emerging.

Working out the ending was very difficult, the death of Yamato. I thought that I was able to deliver a realistic full-length portrait of the struggle, but in certain parts it became larger than life. We could use a great weapon like the Wave-Motion Gun to solve problems, but I kept asking, “is that really the best way?” Even when you think you’ve finished writing with the clearest intentions, you can still be tormented by anxiety.

The Living Past That Could Not be Abandoned

The previous works included many sentimental scenes which were very good, and I dared to deliberately repeat them even if it appears to be a shameless pattern. I tend to like it when a writer’s intentions are revealed by something that happens twice. Though it is partially to please the “fanatic” in me, I also want to preserve the tone.

For example, think of a scene that passes over the Earth, the Moon, Mars, Jupiter, Saturn…as each planet goes by we hear the Scarlet Scarf theme music while Yamato marches forward. At once it expresses both tragedy and bravery. Space is the ocean and Yamato is our ship. It deliberately evokes those feelings. Therefore, I want you to understand that if a scene in Final Yamato seems similar to a previous one, it is a good thing. 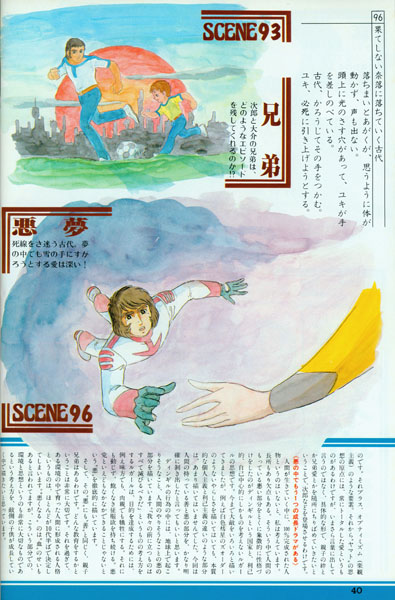 The Message That Spreads to Every Corner

Jirou Daisuke, the younger brother of Shima, reappears after we last saw him in the first Yamato story. His appearance is significant, since it foreshadows a certain event. It also renews the implications of a blood relationship at the same time. The concept of the next generation is expressed not only with the thought of Kodai and Yuki having a child, but also in the relationship between Shima and Jirou.

The immediate family of the Yamato crew is part of the overall portrait. The relationship of a parent to a child and a brother to a brother brings one happiness that increases the power of self. An element such as this is the principle of optimism.

The starting point of Yamato has always been about loved ones, though we don’t always say it in words. The love of parents or brotherhood spreads to every corner, and this is why Jirou reappears.

Another Growth Drama Exists in Evil

I don’t think any human being reaches 100% of their potential in their lifetime. This is both an advantage and a disadvantage.

This is symbolically characterized in the film by the nation called Denguil. Emperor Lugal thinks both selfishly and selflessly. We have shown powerful enemies before, but we did not draw a distinction between egotism and individualism, even if you take Zordar of the Comet Empire as an example.

This time the dual nature of good and evil in humans becomes more clear in the actions of Denguil toward Earth. We depict the evil side of human nature with Lugal’s thinking that “all that stands before us must fall,” even if we sacrifice our own blood to achieve our purpose. His desire for conquest is tireless and insatiable. The evil of a villain is thoroughly demonstrated.

But good can emerge from evil, just as a child can emerge from a parent or brothers can be divided. What kind of education you receive is very important. One’s personality is formed by the environment they come from. In most, it is decided by their mid-teens. Some are said to be born with “bad blood,” but the ideas one is exposed to can be just as important, even in a child who grows up on the side of the enemy.