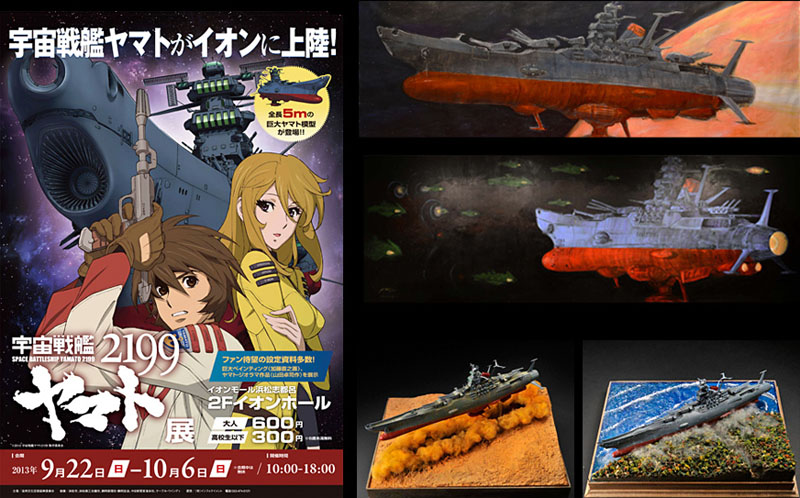 Shizuoka was where the 5-meter Yamato had gone after leaving Odaiba Decks, rejoining other artifacts previously on display at the Niigata Anime/Manga Museum at an Aeon Mall. These included high-end custom model kits built for hobby magazines and two of Naoyuki Katoh’s giant murals that had been painted live for event audiences.

In advance of this, personnel from Yamato Crew tweeted photos of the giant model in its transport vehicle, reporting that it was a smooth trip punctuated by shouts of “COOL!” from those who watched the loading and unloading.

The closing of the Aeon exhibition coincided with the 39th anniversary of the original Yamato‘s broadcast debut, on October 6.

Today’s edition of Asahi Shimbun carried a big article looking back at 2199 and a sidebar interview with voice actor Koichi Yamadera. A copy couldn’t be obtained in time for translation in this report, but will follow next time. 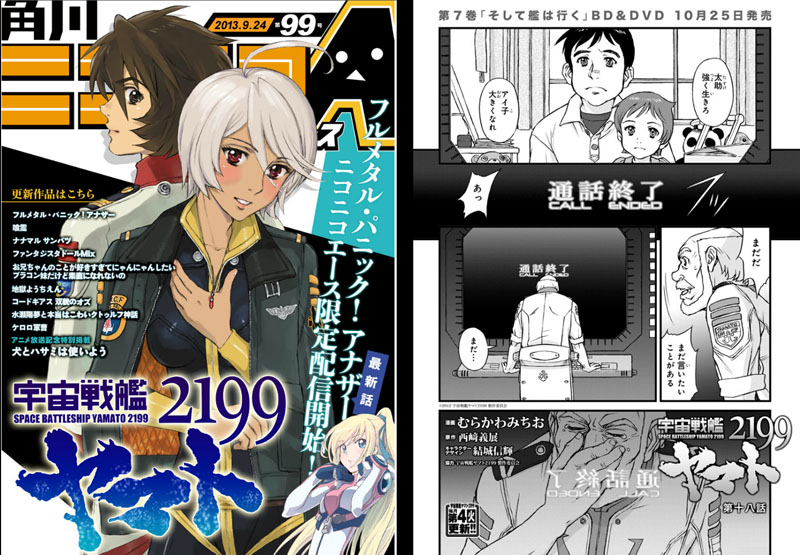 The online Nico Nico Ace manga magazine published this chapter of Michio Murakawa’s 2199 manga adaptation in its 99th issue, which recycled its cover image from an issue of the now-defunct Newtype Ace. The 24-page chapter continued the emotional storyline from Episode 7 of the crew saying goodbye to their families on Earth. 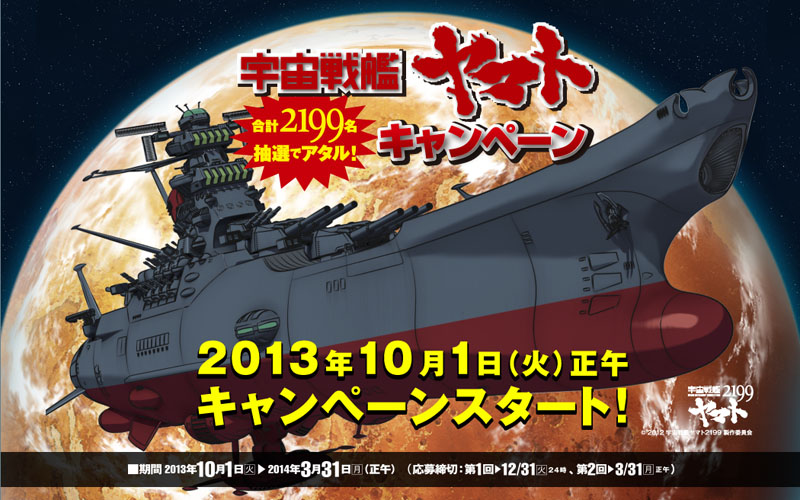 Sapporo is a drinks manufacturer in Japan, and on September 24 they announced a tie-in campaign to start on October 1. From that date through March 31 of 2014, customers who purchased one of 16 different canned drinks would qualify for a free downloadable Wave-Motion Gun sound clip for their smart phone, and also become eligible to earn prizes with purchase points.

This constitutes the first phase of the Sapporo campaign, which ends December 31. The second phase has not yet been revealed. Visit the campaign’s website here.

After long, inexplicable delays, Megahouse finally cut loose with the 1/8 Akira Yamamoto figure originally announced in 2012 (though from here on out, a new figure is supposed to arrive every month). 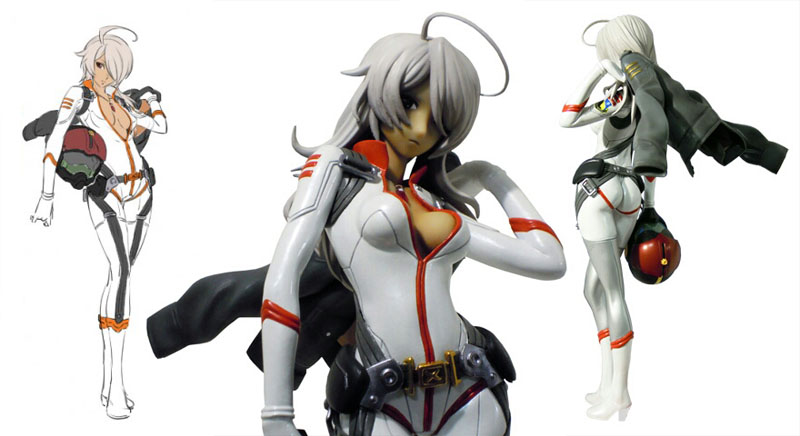 In fact, it took so long to get the figure to market that Yamato Crew had already announced its own custom-color version (with longer hair) on September 6, scheduled for release spring 2014. The figure stands just over 8″ tall.

See more photos and read about the making of the figure here. 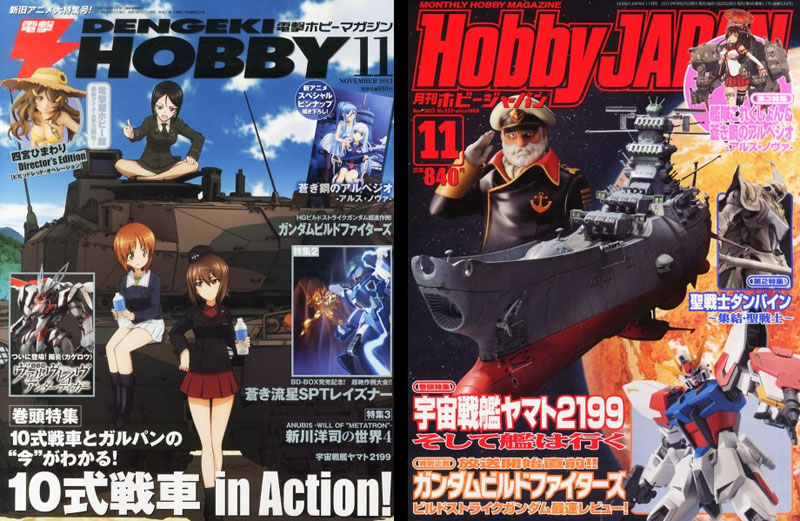 Despite the wrap-up of the anime, coverage in the hobby magazines didn’t slow down one bit, and with new model kits still scheduled to hit every month they won’t run out of things to talk about any time soon. Dengeki‘s 10-page article lead with an ad for the just-about-to-be-released Modeling Guide, reviewed Shinohara’s Cosmo Falcon, examined a scratch-built version of Analyzer’s Exo-armor suit (not yet scheduled to be released by anyone, sorry), and devoted a page to upcoming stuff.

Hobby Japan surprised fans with long memories by publishing a cover image that was a direct echo of a 1995 issue, following up with a foldout poster and an 18-page article on two hyper-detailed Yamato custom models and the recently-released Garmillas battle carrier. They also provided a first look at Megahouse’s Captain Okita figure, a tease for the Melda Dietz figure, and numerous news items both recent and forthcoming. 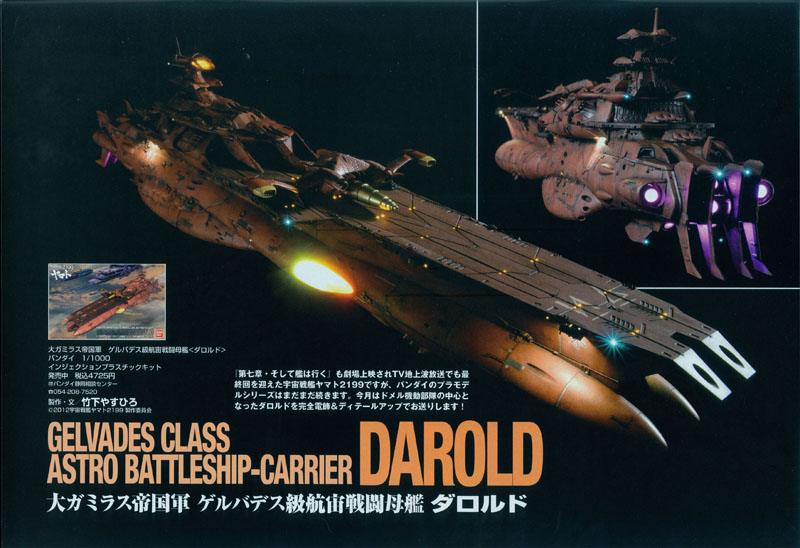 Model Graphix brought up the rear with a four-page article that highlighted the battle carrier and offered shots of Bandai’s upcoming model kits.

The Yamato 2199 music catalog was finally completed with this release, which arrived under somewhat of a cloud; on the very day it came out, music publisher Lantis issued a press release apologizing for typos in the track lists found on the back cover and inner booklet. Fans who couldn’t live with them were invited to mail in their copies (just the paper) for free replacements. But that did nothing to detract from the music itself, which flawlessly brought the ship home and left nothing behind in the vault – as far as we know.

“Monumental” is just about the only single word that adequately sums up the finale of the broadcast, and we might as well get the elephant out of the room up front: it was a closely-guarded secret that a special announcement would immediately follow the episode, and it was not a disappointment: two screens appeared with the following words: Complete New Story – Theatrical Release, Coming in 2014. (See it on Youtube here.)

Absolutely nothing has been announced about the content of this film, but the very fact of its existence is enough to declare Yamato 2199 an unqualified success.

The Nico Nico simulcast was another extended affair, a four hour celebration called the “Big Sendoff Party.” Four of the Yamato Girls assembled once again, this time joined by race queen Noa Mizutani from Team Le Mans, and arguably the most special guest of all – series director Yutaka Izubuchi.

Like the last two programs, this one also took place in front of a live audience. 200 seats were offered up on the Yamato Crew website, and were all claimed in less than a day; the early announcement that voice actors might also show up probably accounted for this, but that never came to pass. After this, the program would go on hiatus for three weeks. 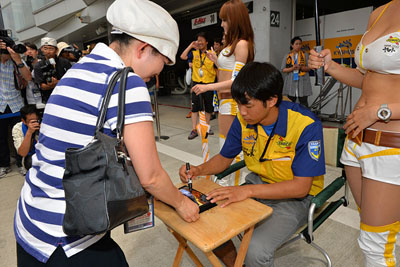 Noa Mizutani’s appearance on Nico Nico was a bit surprising, since the latest round of the Super Formula season was held that same day. Car 7 driver Ryo Hirakawa had qualified to start in 10th position and finished farther down, but his teammate in Car 8 qualified and finished in 1st position. Round 7 will take place November 9 & 10.

Hirakawa is shown at right at an earlier event; Noa Mizutani is seen in the background.

See the race results (and plenty of photos) on the English-language Super Formula website here. 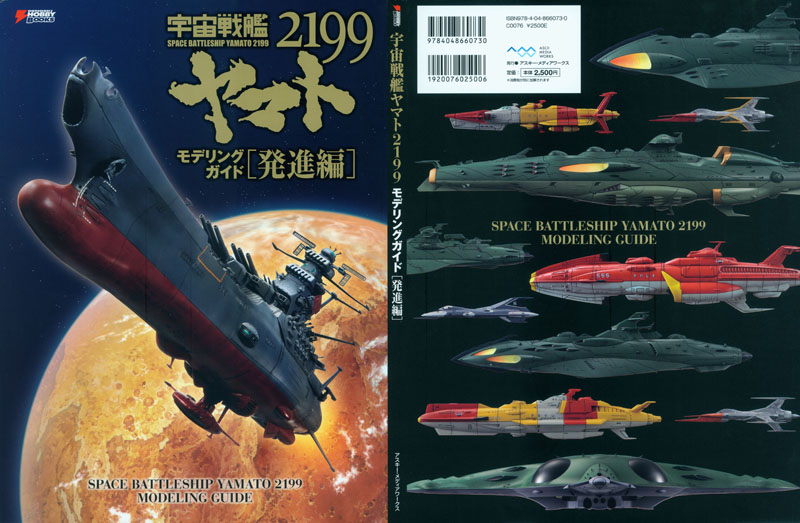 September finished with the first of what looks to be a mini-wave of 2199 books when Dengeki Hobby Magazine published the first dedicated “Modeling Guide” with the promising title of Launch Edition. Spanning 144 pages, it is broken down into several sections: character figures, photo-features on models of Yamato, Earth ships, and “stage 1” Garmillas vessels, dioramas built by superstar modeler “Wild River,” and various scratch-built ships made before their Bandai releases.

All that material focuses on the first 6 episodes and is reprinted from issues of Dengeki Hobby (as seen in previous 2199 reports), but an unexpected bonus at the end was a true delight: blueprints of all the ships featured in the book, formatted in the exact style of the Be Forever Yamato blueprint set from 1980.

And finally, it closed the first of what will hopefully become a series of size comparison charts between all the vessels. Click here to see it.

Gunze Sangyo continued its custom line of “Mr. Color” paint for Yamato model kits with a set for the Garmillas battle carrier. A Garmillas warship set (above right) had previously been released in July. 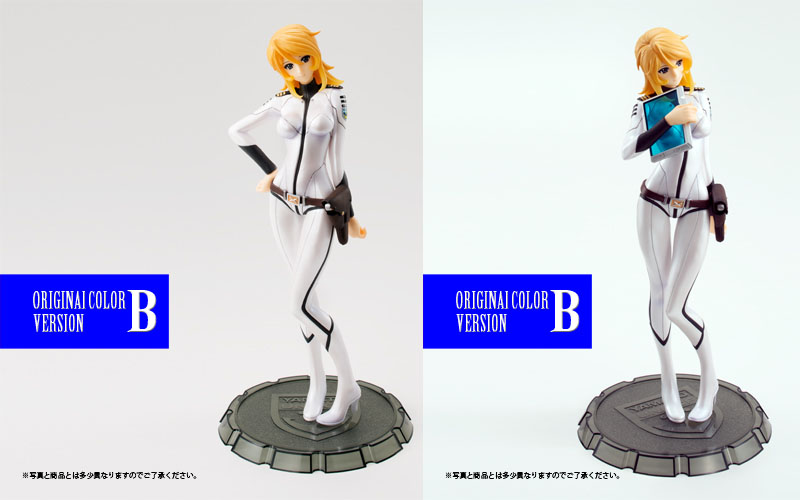 Yamato Crew opened up pre-orders for their second original-color version of the 1/8 Yuki Mori figure from Megahouse, to be released in April 2014. (See the first in Report 22.) 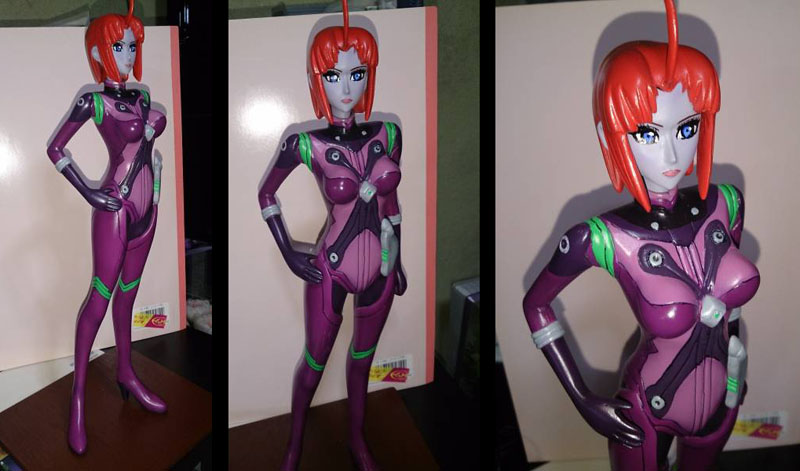 Also spotted: this striking garage kit figure of Melda Dietz turned up in an online auction during the month of September. The manufacturer, Hagane, first introduced this figure at the Treasure Festa Hobby Show in May. 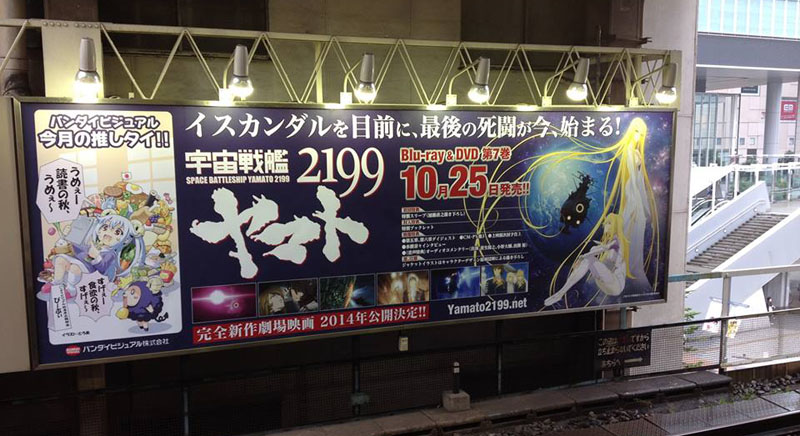 Click here to continue to Report 25, featuring the long-awaited video release of Chapter 7.
(The photo above of the promotion at Akihabara Station was taken by friend-of-the-website Antibiotictab.) 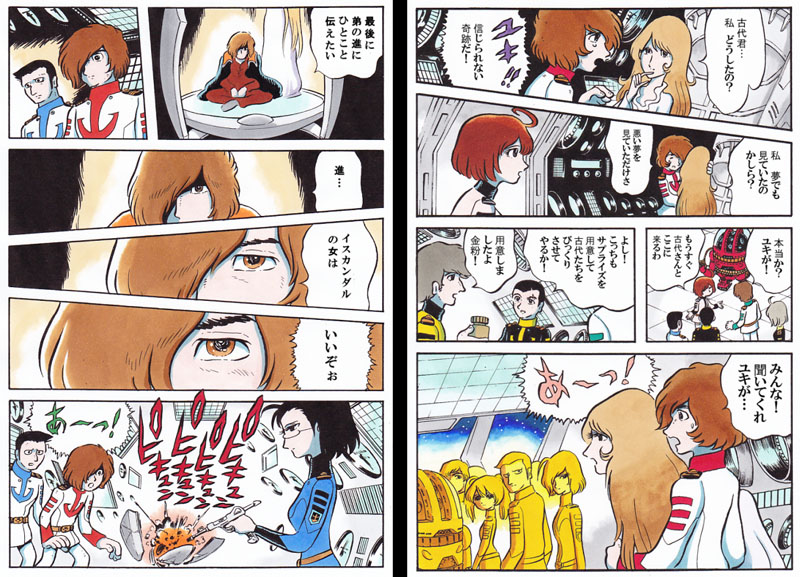 New parody comics by Keiichi Tanaka, based on scenes in Chapter 7. At left, Niimi reacts negatively to Mamoru Kodai’s last message. At right, Yuki returns to life and the crew plans a special surprise to welcome her back.