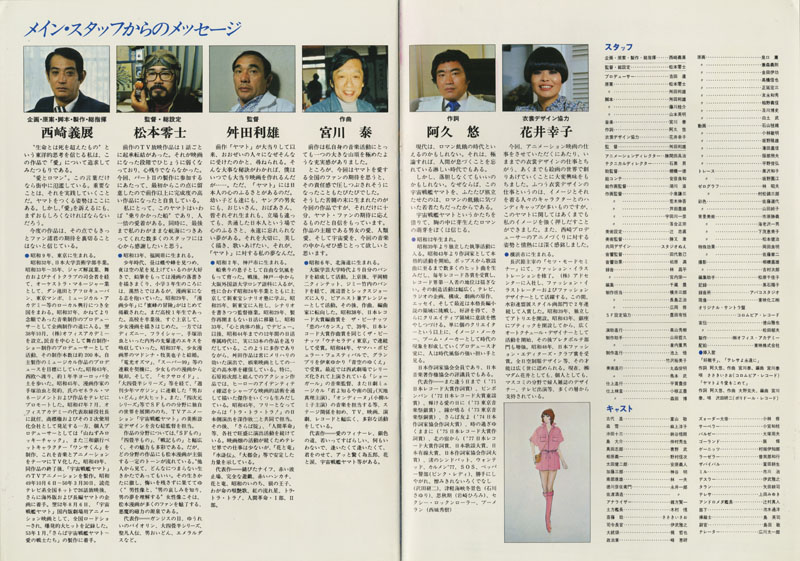 I believe such Oriental thoughts as “life transcends death,” and with this in mind I attempted to pursue the “love” in this work. “Love and romance.” Our lives are flooded with these words. The important point is to actualize them. The attitude for making Yamato resides in this. Yet, though we appeal for “love,” the film has to be entertaining, first and foremost. I believe this work will live up to the expectations of fans in this regard as well.

Born in Tokyo in 1934. In 1957, he graduated from Nihon University Art Department. From 1958-1960, after working as a jazz commentator and M.C. for stage productions and night clubs, he traveled throughout Japan as an orchestra manager, accompanying tours for groups such as Dan Ikeda & Afro-Cuban, Tokyo Mambo, and Musical Academy. In 1964, he started working in planning and production as a producer of musicals, which had been his heart’s desire.

In October 1963, he established Office Academy, Inc. He became active as a producer of stage and drama, centering around Min-on Concert Association. He mounted about 200 productions during this time and aimed at producing an original musical. In 1968 he left Japan and traveled the whole of Europe for a year and a half. In 1970, he signed a contract with artist Osamu Tezuka for general management and promotion of his works for television.

In July 1972 he reformed Office Academy as its President, specializing in trademarks and their second useage. As an independent producer, he supervised the anime series Mountain Mouse Rocky Chuck and Wansa-Kun, a mascot of Sanwa Bank. He oversaw the animation of both with a strong musical sensibility. After these works, he started work on Space Battleship Yamato in 1974. After 26 episodes were broadcast on the Yomiuri TV Network from October 6, 1974 to March 30, 1975, he planned to make an international version and a feature film version. On August 6, 1977, this opened across Japan and became an extremely big hit. In January 1978, he commenced production on Farewell to Space Battleship Yamato.

In the previous TV series, each episode had ki-sho-ten-ketsu. [Translator’s note: this is a combination of Ki (introduction), Sho (development), Ten (turning point) and Ketsu (conclusion). In other words, a full story arc.] In the feature film, the ki-sho-ten-ketsu was weakly presented, and I greatly regretted it. This time, when participating in the production of Part II, I gave careful attention to this point, so I am proud that this has higher level of completion than the previous work. For me, Yamato is “the ship I am about to board,” [Translator’s note: a Japanese proverb about finishing what we started] so my attachment is stronger than that of others. At the same time, I want to express my appreciation to the numerous staff members who coped with my selfish voyage.

Born in Fukuoka Prefecture, 1938. In his boyhood he loved to watch butterflies and bees by day and the stars by night. Whenever he held a pencil, he drew manga. By the third grade, he developed the ambition to become a cartoonist. In 1954, his first work, The Adventures of a Honeybee was published in Manga Shonen, when he was only a tenth-grader. After graduating high school, he immediately moved to Tokyo and started drawing girls’ manga.

At the same time he absorbed the essence of the pioneers in Japan and overseas, such as Disney, Fleischer, and Osamu Tezuka. In 1962, he married Miyako Maki, the Madonna of girls’ manga. With continuing serials such as Lightning Ozma and Submarine Super 99 as a start, he moved away from girls’ manga. He then created Sexaroid and the Great Yojohan [Tiny Room] Series, and found tremendous success with Oidon Man. [Translator’s note: Oidon is an unrefined version of the first-person “I.”] After developing his own SF world in The Fourth Dimension Series and others, he became the general director and conceptual designer of the Space Battleship Yamato TV Series.

He works in a variety of genres such as SF, everyday life, and war history, and their individual points are also varied. But a certain tone and appeal underlies each genre in a Matsumoto manga. That is, the image of a man who “thoroughly lives life his own way and ends it without regrets despite what others think,” and the image of a woman “who knows the sadness of the man, and understands and supports him in his dreams.” These images are the magnetic draw that attracts many fans to his work. 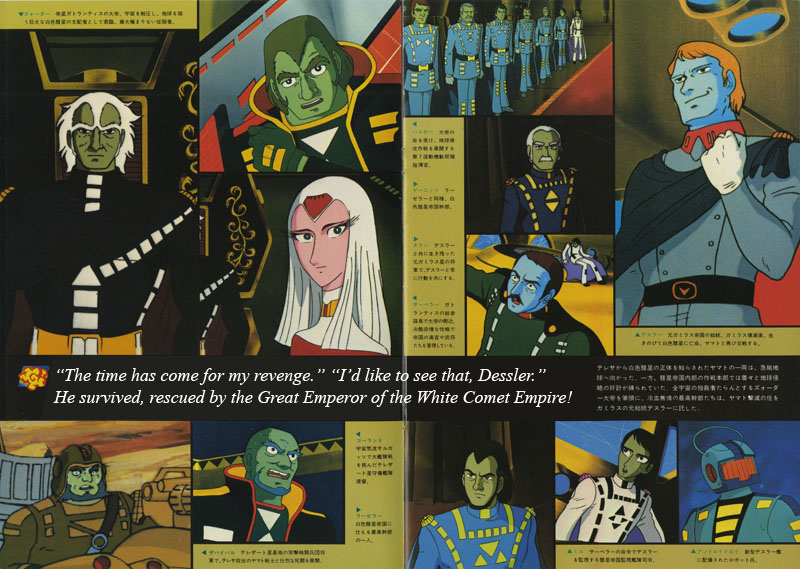 Since the previous Yamato was a great success, many people have asked me why it was such a hit. If I knew that important secret, I could make hit films any time I wanted. I think the people of Japan found a sentimental place in their hearts for Yamato. There exists the furusato (nostalgia) of one’s heart, a never-forgotten dream, which Japanese people of all ages share in common. My dream for Yamato is to depict and celebrate that with care and beauty.

Born in Kobe City in 1927. As the son of a seaman, he was raised with a liberal spirit. At the end of the war, he entered the Russian language section of Osaka Foreign Language University from Kobe High School, but found the study not to his liking. He graduated in 1954 and moved to Tokyo and studied at the New Toho Scripwriting School. In 1950, he joined Toho Films and studied directing while writing scripts, and made his debut in 1958 with Journey of a Mind and Body. He went on to direct 53 films through 1969.

In addition to being so prolific, Masuda’s works have consistently high quality as entertainment presented with a strong voice. In particular, he produced many action masterpieces starring Yujiro Ishihara, which defined the hero through sharp dialogue. In 1970 as a freelance director, Masuda and Kinji Fukasaku supervised production of the Japanese unit on Tora! Tora! Tora! After this, he took an active part in many different production companies as a director on such films as Goodbye Rules and Human Revolution. His credits are mainly in cinema rather than television, but he showed strong directorship on the TV programs Flower and Dragon and Big City.

For my music career, I found the previous work as satisfying as climbing to the top of a big mountain. But this time, thinking about the expectations of Yamato‘s devoted fans all over Japan, I often felt a pressure of responsibility that almost crushed me. The music for this work was born as a result of such struggles, so I can say with confidence that it will live up to the fans’ expectations. Through my music, I hope the listeners can feel the main theme of the film–love between a man and a woman, the love of human beings, and the love of the entire Universe.

Born in Hokkaido, 1931. He organized his own band at Osaka Art University. After moving to Tokyo, he worked with the Seiji Hiraoka Quintet and Jimmy Takeuchi’s Band, and he joined Shin Watanabe and the Six Joes as a pianist, after which he moved into composing and arranging.

In 1963, he received the Japan Record Arrangement Award for the song Vacation of Love and the Composer Award for One Night in Tokyo, both recorded by The Peanuts. [Translator’s note: this singing duo gained international fame as the tiny fairies in Mothra.] In 1969 he won the Grand Prix Award at the Yamaha Pop Music Festival for Where the Blue Sky Goes. Recently, he has been active in a variety of fields such as stage, TV, film, musicals, and records. 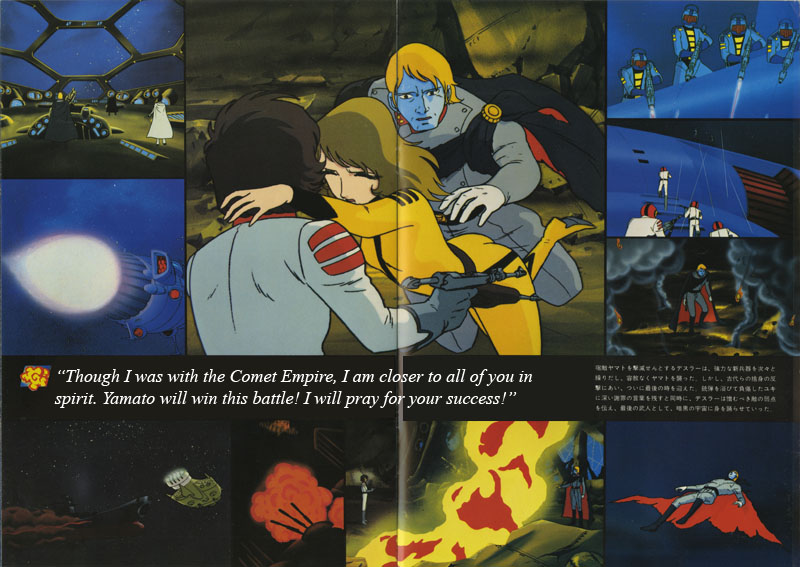 It can be said that our period of history is starving for romance. To put it more dramatically, this is a sad time in which people forget to breathe. But perhaps we don’t have to be disappointed. For it was the young people who, realizing their hunger for love, set Space Battleship Yamato out on a journey again. I believe in the seed of romance that grew in my heart, borrowing the form of Yamato.

Born in 1937. He started working as an independent writer in 1964 and became a lyricist in 1968. He has written lyrics for many hit songs from traditional to pop, and receives numerous awards every year. His position as the leader in the world of music is unshakeable. His creative activities include the planning of TV and radio programs, writing original Gekiga manga stories, and essays. Recently he challenged himself to write a longform novel. He has earned a positive reputation as an energetic and active creator, but is much more than that; his production talent has made him a contemporary phenomenon as an image maker and trendsetter, and he is regarded as a strong leader of contemporary culture. He is a member of the Japan Lyric Writers Association and the council of the Japanese Society for the Rights of Authors, Composers, and Publishers (JASRAC).

While working for animated film, I became very interested in the creation of an entire picture-world, different from other costume design works I have been engaged in. Usually, the work of costume designing has many handicaps such as the gap between the design image and the character of those who wear the costumes. But in this work of Yamato, my image was strongly presented. Also, I was very impressed with Producer Nishizaki and his passion for creating animation.

Born in Yokohama City. She completed a course in fashion illustration at Setsu Mode Seminar and joined Ad Center Inc. as a fashion illustrator and designer. During this time, she received awards over two consecutive years at the Watercolor Painting League Exhibition, Style Illustration Section. In 1964, she opened her own independent studio. In 1968, she opened a boutique in Ginza, Tokyo and became an active designer of Haute Couture. In 1973, she received the Japan Fashion Editors Club Award. Her talent is widely recognized by such works as the uniform design for All Nippon Airways. Today she is active as the owner of Madame Hanai, Inc. and also as an individual in the arena of mass media such as the editing of women’s magazines and appearances on television. 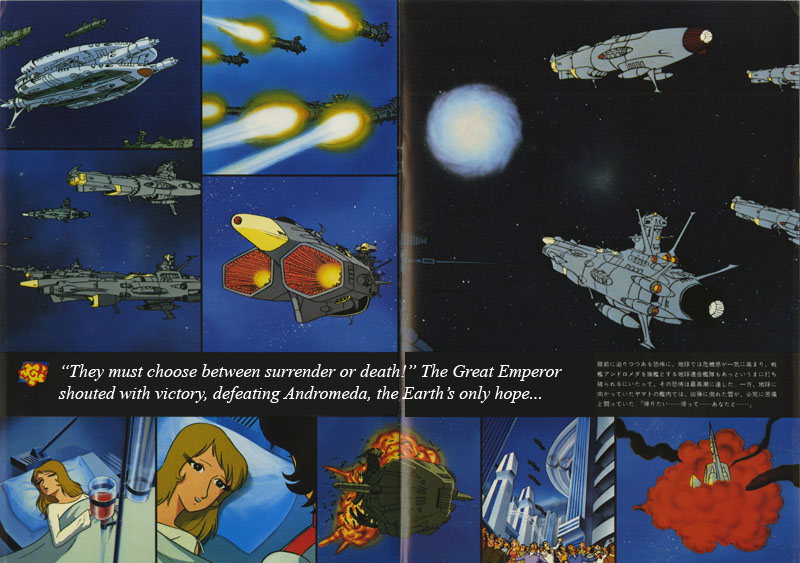