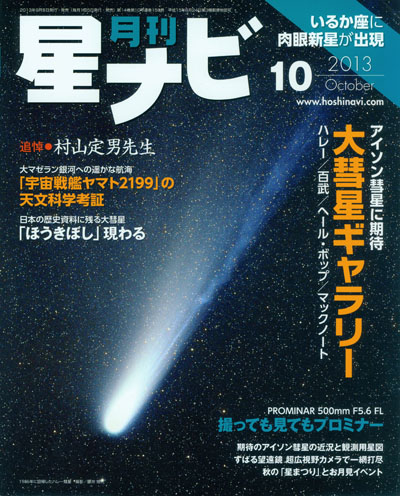 Monthly Star Navi is an astronomy magazine from Japan’s Ascii Media Works. The October 2013 issue (published September 5) contained this article by Professor Toshihiro Handa of the Kagoshima University Department of Science, who serves as Yamato 2199‘s astrophysics advisor. In it, he comments on the anime’s representation of real stellar objects just as he did in his earlier live lectures.

The scene is at the end of the opening title; an impressive shot moving toward the Large Magellanic Cloud, beautifully drawn based on astral photography. At the Space Battleship Yamato 2199 science lecture held at the Science Museum on August 17, this scene was projected in the Synra Dome, and it was a good introduction to astronomy.

In Space Battleship Yamato, 39 years ago, the voyage was “to the Large Magellanic Cloud, 148,000 light years away,” but understanding of celestial bodies has increased since then, and the distance to the Magellanic Clouds has become more reliable. A paper published in 2013 placed the distance at 163,000 light years. Although the opening title of the original TV series finishes with a similar scene, only stars are drawn there. 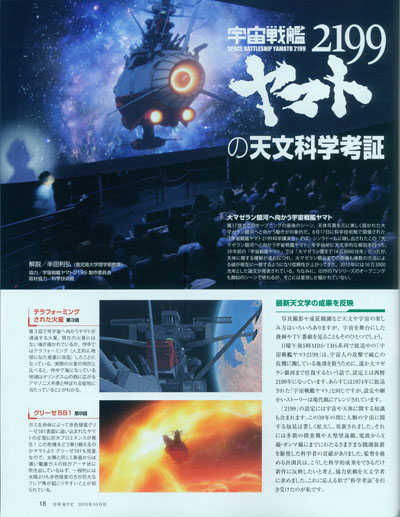 Reflecting results of the latest astronomy

There are various ways to enjoy astronomy and space, including photography and observational expeditions. Viewing manga and TV programs set in space is one of them.

In Yamato 2199, seen Sundays at 5pm on MBS/TBS, the concept is a voyage to the Large Magellanic Galaxy and back save Earth, which is on the verge of extinction after an alien attack. That was also the outline of Space Battleship Yamato, which was broadcast in 1974, but the story has been carefully re-arranged in a contemporary style.

Knowledge of space and celestial bodies is included in the setting for 2199 as well. Our knowledge of space has expanded remarkably in the last 39 years, so it was updated. Given the large number of space probes and telescopes, and contributions from scientists using a variety of radio, X-ray, and gamma-ray devices, director Yutaka Izubuchi wanted to reflect scientific achievements as much as possible in the new work, and asked for cooperation from an astronomer. In response to this, I took charge of “science and research.”

As far as the finished production goes, this job was in an advisory role. Fundamentally, the advice was given in the context of, “never mind what the story is.” However, it was also enjoyable for those who like astronomy and space to watch along and think, “How would this work in real space?” When you do it in a mindset of not betraying that idea, you could say it’s a fairly important job. 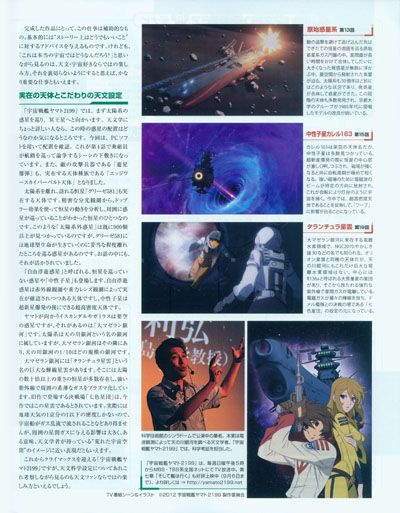 The first planet in our solar system to be seen in Yamato 2199 is Pluto. If you are even a little familiar with astronomy, you know that the composition of this planet makes it an interesting place. Its position was checked using PC software. This underpins a scene in Episode 4 where the crew argues over their route. Moreover, the objects that are turned into attack weapons of the enemy (called Planet Bombs) are in an astronomical family that really exists, called the “Edgeworth-Kuiper Belt Objects.”

Outside the solar system, we visit Gliese 581, an actual celestial body. Using precision spectroscopy, the motion of this star was analyzed using the Doppler effect and it turned out to be a fixed star with planets orbiting around it. More than 900 such “exoplanets” have been found, but one planet that orbits around Gliese 581 is at the appropriate distance to harbor Earth-type life. This was utilized in the episode.

A “rogue planet” that does not orbit a fixed star, and a “neutron star” also appear. The existence of rogue planets has been confirmed by infra-red and gravity lens observation, and a neutron star is a high-density celestial body that is the remnant of a supernova explosion.

Although Garmillas and Iscandar are fictional planets Yamato travels to, their solar system lies within the Large Magellanic Cloud, which orbits the Milky Way and is about 1/10 its size. 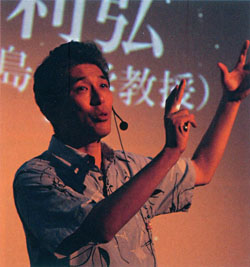 Also within the Large Magellanic Cloud is a huge emission nebula named the “Tarantula Nebula.” There, many fixed stars exist that are dozens of times heavier than our sun, and the surrounding gases are diluted into plasma by strong ultraviolet rays. It was decided that the “Battle of the Rainbow Star Cluster” from the original work would be set here. In fact, it is far less dense than Earth’s atmosphere, so it would not be possible for a spaceship to be swept away by gas turbulence, but there would be a large impact on surrounding gases. To some astronomers, it has the image of “wild space.”

Space Battleship Yamato 2199 is now reaching its climax, but it is something astronomy fans can watch while considering various settings of astronomical science.

The writer gives performances at the Synra Dome of the Science Museum. His primary occupation is observation of the Milky Way via radio astronomy. 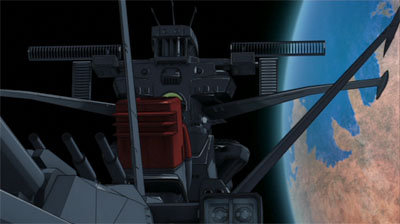 Yamato passes Mars on its outward journey in Episode 3.
A sea which is not currently present on Mars is depicted, supposedly the product of terraforming (the artificial remodeling of a planet to resemble Earth). When compared
to real Martian topography, the area of the sea fills a known region called the Amazonis plain, which spreads out to the west of Mount Olympus. 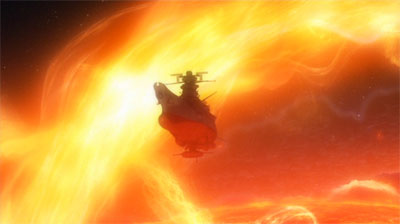 A huge prominence forms in front of Yamato, which is forced toward the surface of the red dwarf Gliese 581 by an entity of living gas! How can Yamato overcome this crisis?? Since Gliese 581 is a star like our sun, a pillar of ionized gas should rise in the shape of an arch. It is well known that huge flares from a red dwarf, larger than those of our sun, are likely to occur. 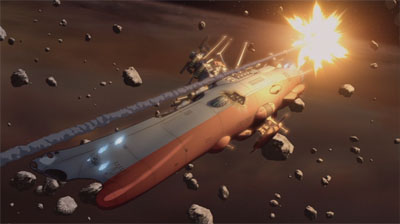 To avoid enemy pursuit, Yamato hides in the accretion disc surrounding a young star in a protoplanetary system. A torpedo fired from sub-space closes in through countless particles of fine dust that coalesce into floating planetesimals over a long time. This was also the condition of our solar system about 5 billion years ago. Planetesimals combined to make up the planets. There are many developing celestial bodies at this stage, and improvement continues on a model proposed by a group at Kyoto University in the 1980s. 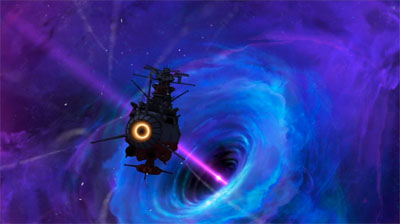 Karel 163 is a hypothetical astronomical name, but many neutron stars have been found. In a supernova explosion, the core of a star is violently crushed. While its magnetic field becomes strong, its period of rotation becomes very short. A beam of electromagnetic radiation is emitted in a particular direction, sweeping through space like a rotating lighthouse. Ultra-high density bodies appear in the series and have an affect on the “warp.” 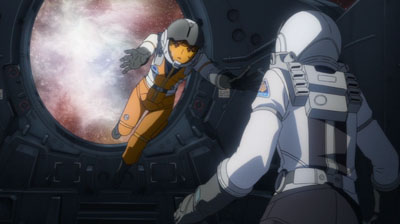 This domain of ionized hydrogen actually exists in the Large Magellanic Cloud. It is also known by such names as NGC2070 and 30 Doradus. While it is the same type of celestial body as the Orion Nebula, there are no such domains of ionized hydrogen in the Milky Way parent galaxy. There is a massive star cluster called R136a in the center, and the gas is ionized by intense UV light emitted by the stars. The ionized gas gives off a variety of bright light, and this became the setting for the Battle of the Rainbow Star Cluster, the decisive battle with the Domel fleet.

Read Part 2 of this article, published in the January 2015 issue of Star Navi

An article on Toshihiro Handa from Yomiuri Online, May 2013

Leave a Reply to The E Cancel reply