Back up to Part 4 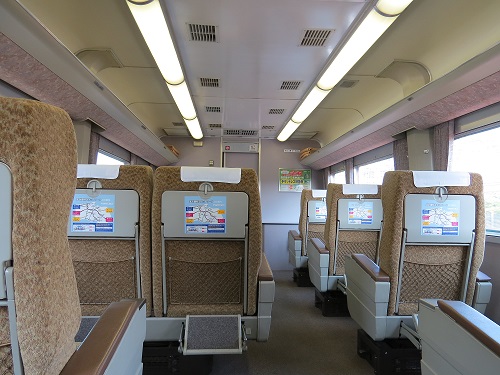 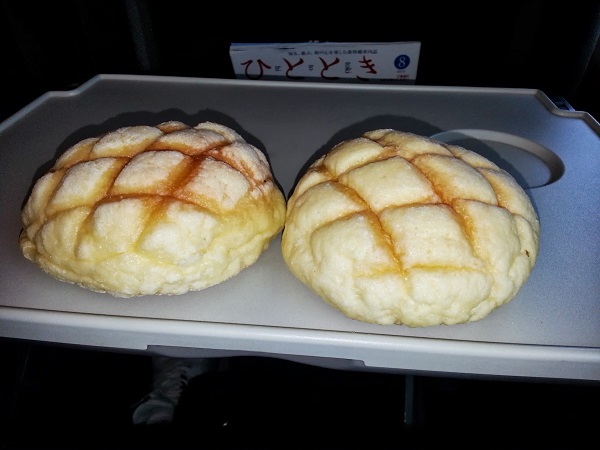 Aboard the Limited Express Konotori train to Takarazuka.

Melon Pan from a Bakery at the station for breakfast!

Our original plan was to visit the Osamu Tezuka Museum yesterday, but due to circumstances previously mentioned we needed to fit it in around the Kure trip. We took our originally planned seats on the 491 Hikari to Hiroshima but instead transferred at Shin-Osaka for the Ltd Express Konotori to Takarazuka. 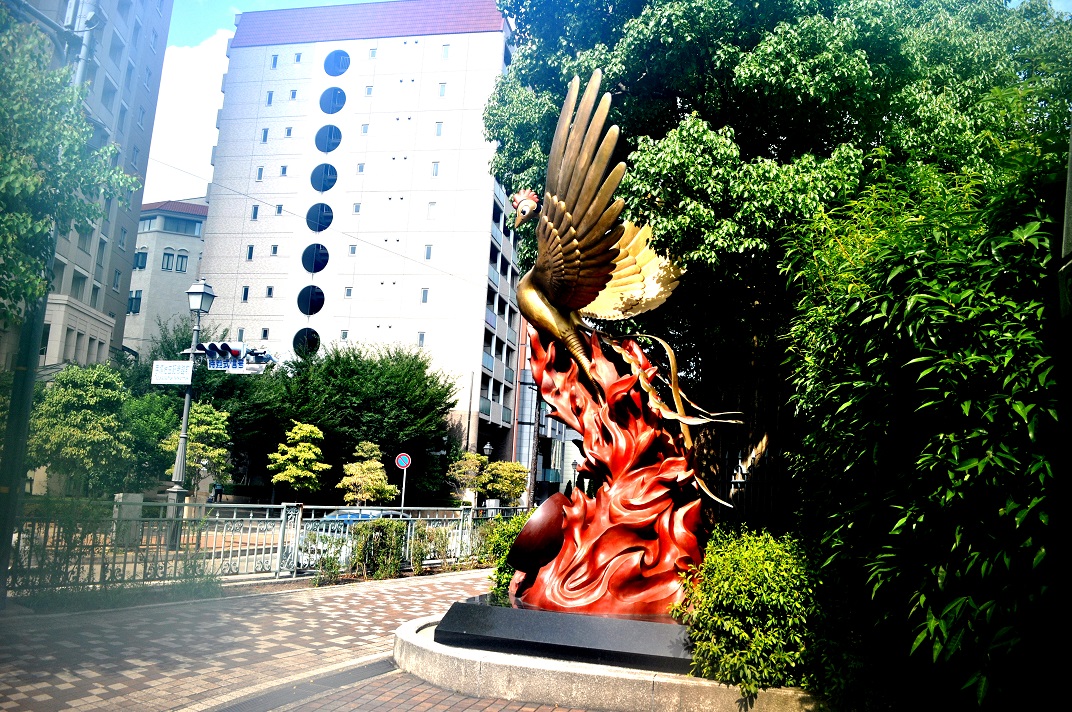 The statue of Tezuka’s Phoenix adorns the entry path. 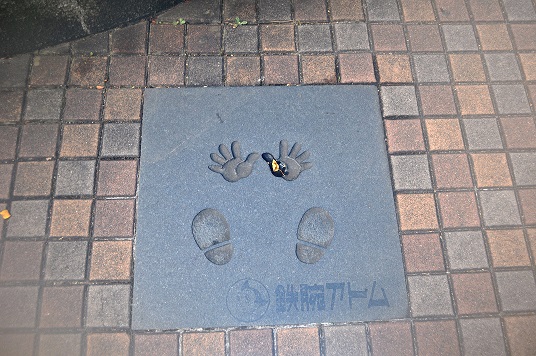 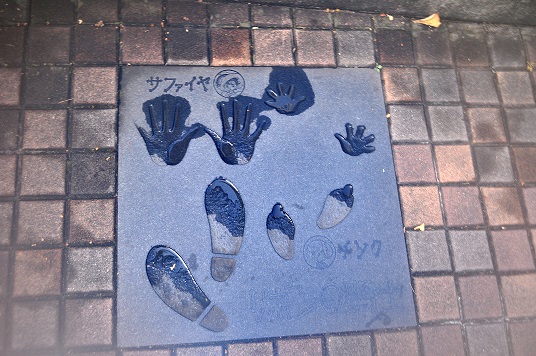 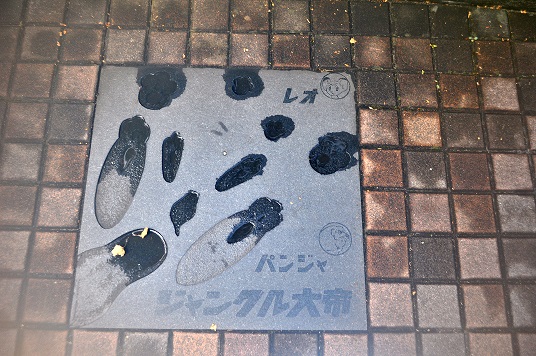 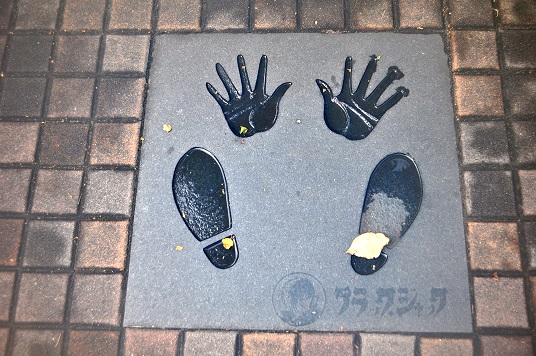 The footprints of many of Tezuka’s most famous characters are imprinted on tiles in the path up to the museum entrance. Clockwise from top left: Astro Boy, Princess Sapphire and Tink (Princess Knight),
Black Jack, Kimba the White Lion and his father, Caesar.

We got there with fifteen minutes to kill and got photos of the exterior, which includes a giant Phoenix statue, pillars with famous Tezuka caricatures on each side, and brass plates with hand and footprints (and in certain cases nose or mustache). 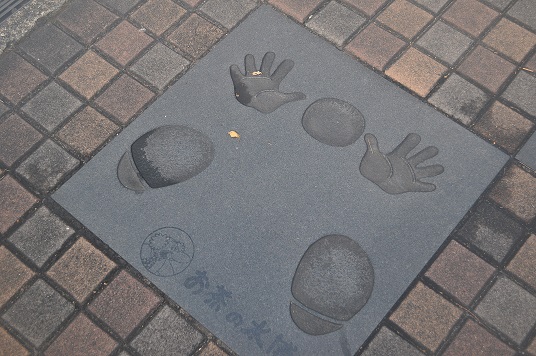 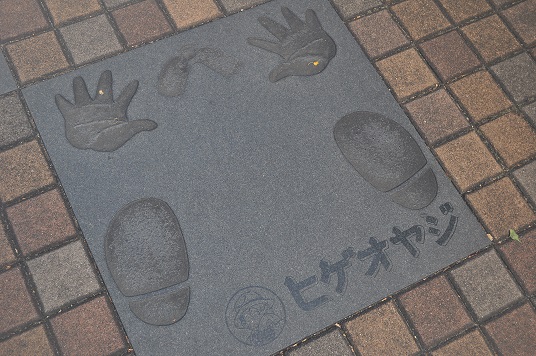 Inside, we were directed to vending machines, bought tickets in and entered. There’s a beautiful stained-glass mosaic in the ceiling in the foyer and a tiled one in the floor, all the while a jingle of the Astro Boy theme plays in the background. 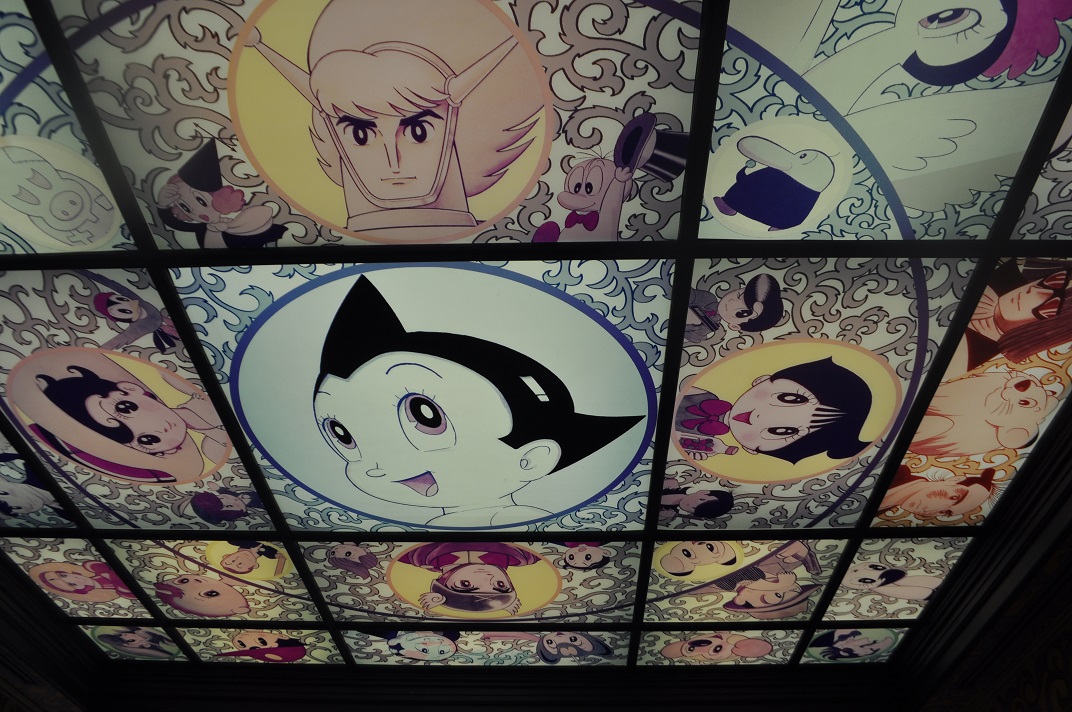 The stained glass ceiling of the foyer, with Astro Boy the centerpiece. 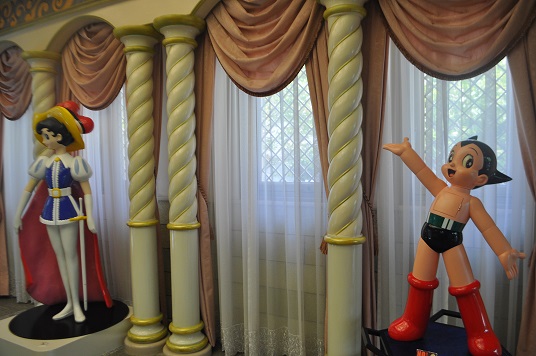 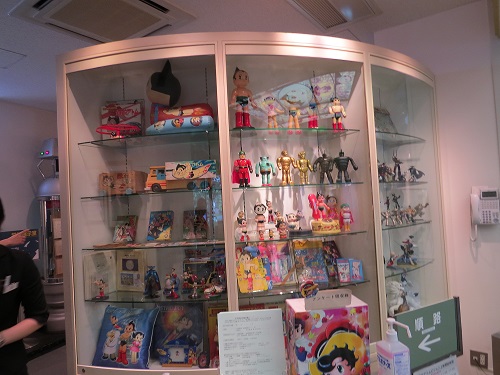 Underneath the stain glass ceiling, the foyer contains life-size statues of Astro and Princess Sapphire on one side…

…and a display shelf full of Tezuka toys on the other!

The first area inside is the permanent display with artifacts and history of Osamu Tezuka-Sensei’s life and works, including a complete timeline emblazoned on one wall. In addition there are displays of various editions and volumes of titles including Metropolis, Astro Boy (including a lyric book) and Jungle Taitei (more famous as Kimba the White Lion in the English-speaking world). The elevator doors on each floor are works of art, characters of various series etched into them. 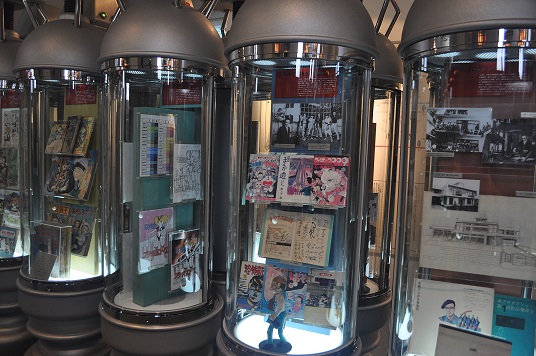 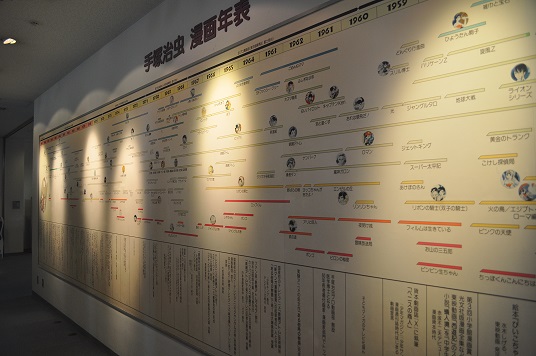 Some of the displays in the first permanent exhibition area.

The timeline adorning one wall of the first area.

First floor up was Macross: The Museum, a temporary exhibit which ran from July to October 2013. We were greeted by the promotional artwork and a timeline of Macross production. The first wall inside included portraits of the three TV Macross battleship captains: Global, with pipe in a case below the portrait, Max Jenius, and Geoffrey Wilder. 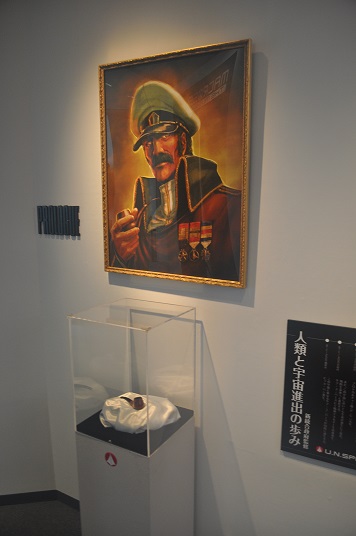 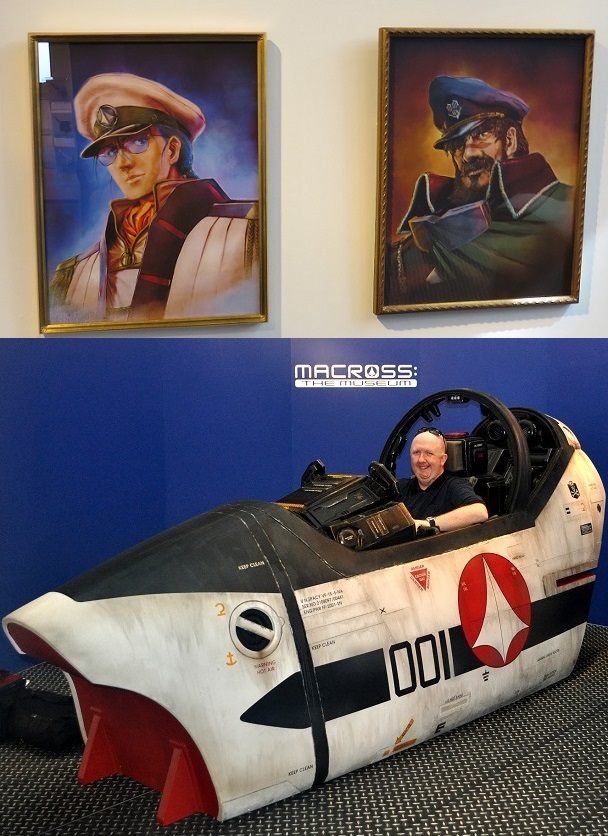 Captain Global and his pipe.
No smoking on the bridge, sir!

In addition, there were schematic drawings of the VF-1 (one of the few things prohibited from being photographed) before we came to the full scale VF-1S cockpit mock-up (which hit us in the face as we entered the exhibit). The cockpit is the movie layout rather than TV. To get our pictures taken, we pulled the right side out gently to enter. The cockpit itself had a looping video of a launch sequence complete with English ATC dialog and three buttons to choose three classic Macross music pieces.

From there was a display case (also no photos allowed) containing various props imagined from the series, including the photo album from the closing credits. 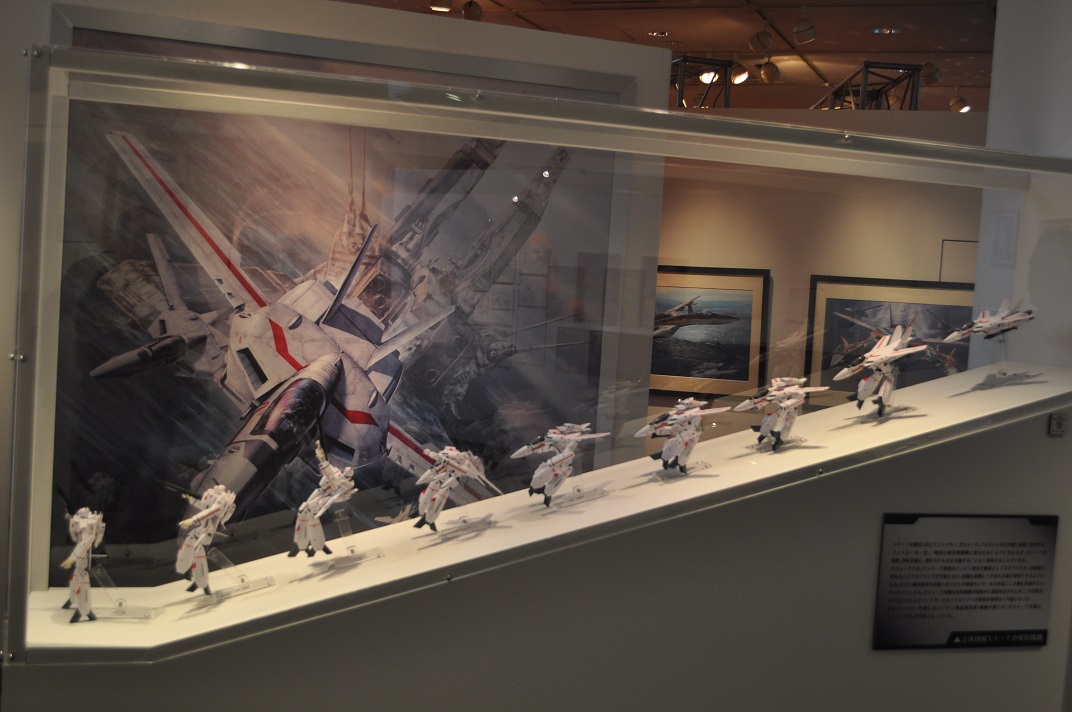 The 9-step VF-1 Valkyrie transformation sequence using 1/60 VF-1J Hikaru type toys.
Note the magnificent artwork on the other side of the display shelf.

Right next to this display was a depiction of the transformation sequence from Fighter to Gerwalk to Battroid – 9 identical 1/60 scale VF-1J toys were used to illustrate the process. 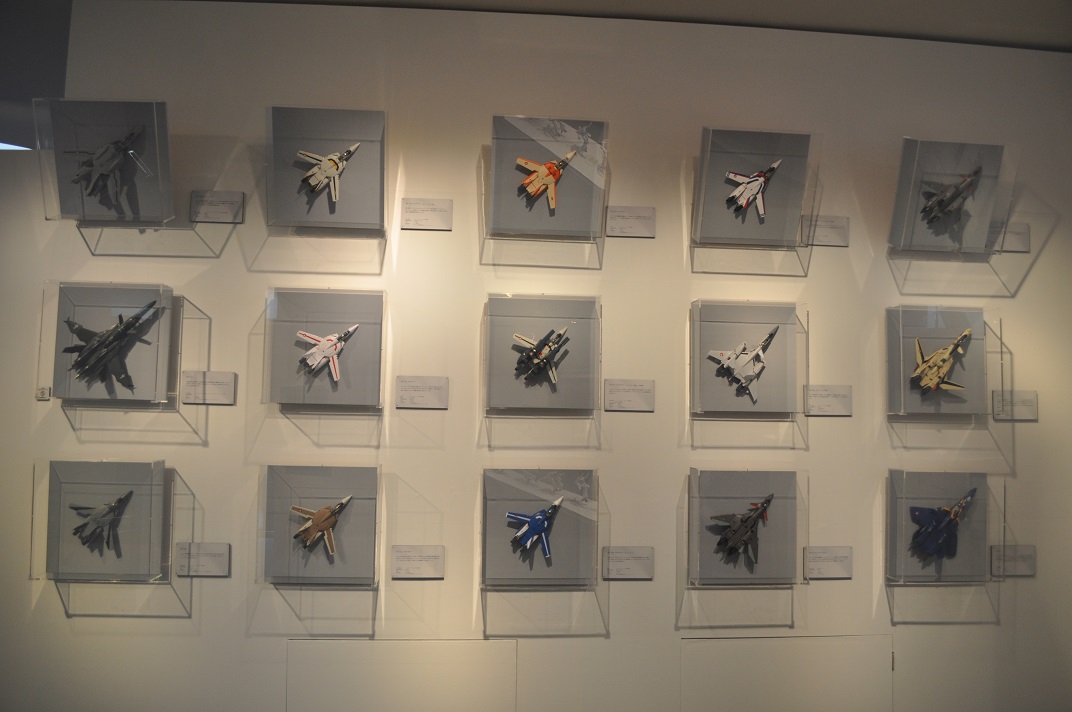 One wall full of Valkyrie toys… 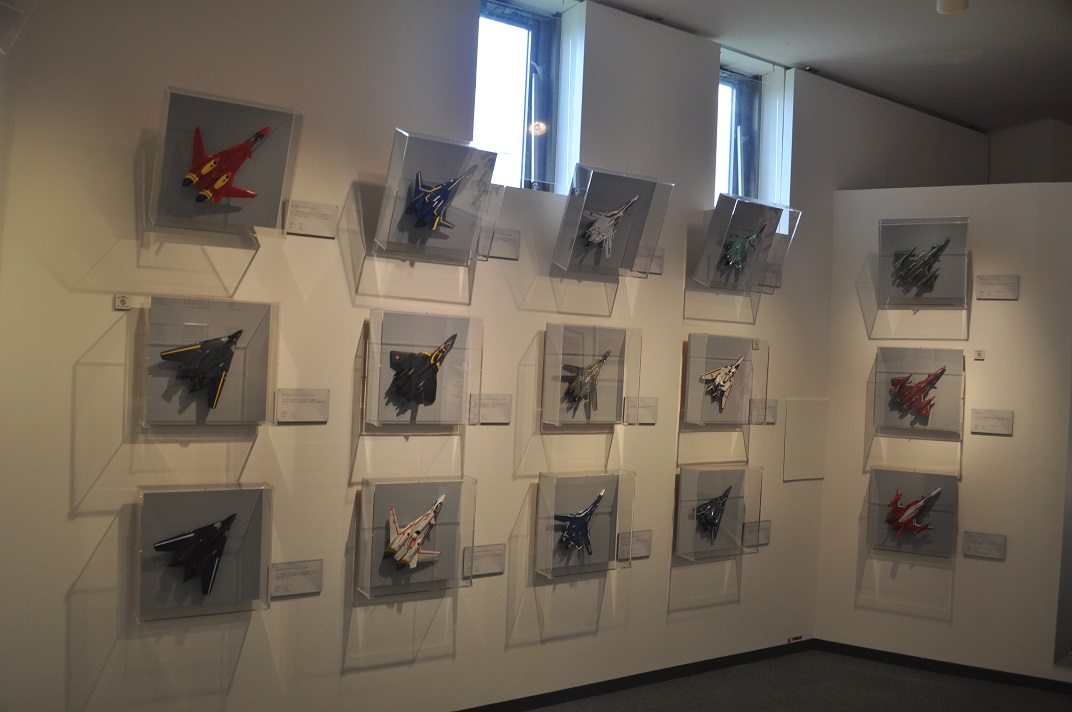 Another highlight was right behind us – almost the A-Z of Valkyrie toys – most of which look to be 1/60 scale Yamato releases (for Macross Zero and Super Dimensional Fortress Macross; Bandai toys for the Macross 7 and Macross Frontier series) all lined up in display boxes on the wall. Initially we thought that these were also not allowed to be photographed, but on closer inspection we found that these signs said “Do not touch,” so Terry and I started shooting away. I’m pretty sure that these were toys rather than models as at least two of them (The VF-1A cannon fodder edition and the beautiful VF-4G Lightning III) are on my shelves back home.

After the wall of awesomeness there was a huge print of Vermillion Squadron (Hikaru, Max, and Hayao) taking off from the SDF-1 around the time of Episode 16, followed by a mini gallery of Valkyrie paintings that appeared to be the work of famed model box artist Hidetaka Tenjin, but due to my near-complete lack of Japanese I couldn’t confirm this. 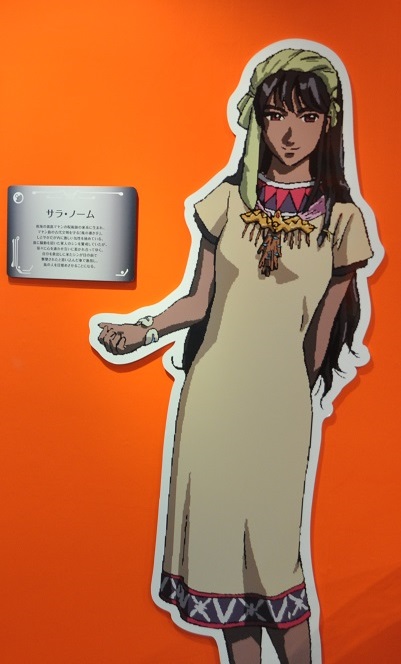 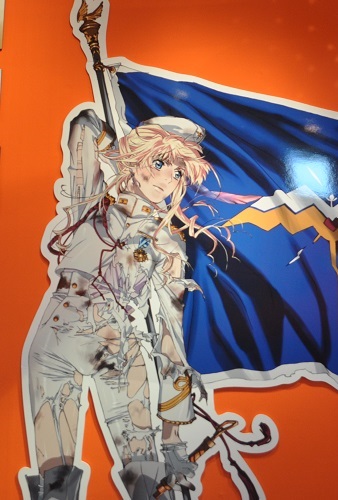 Sara Nome’s portrait, noticeably pixellated
even from a distance

The display for Sheryl Nome, in contrast
much higher resolution.

The final section included a set of wall displays of the various voices of Macross from Lynn Minmay through Sheryl Nome, and a cycle of songs from various singers including Macross Zero‘s Sara Nome and Frontier‘s Ranka Lee and Sheryl Nome. The Sara Nome image had very noticeable pixellation, and I have to wonder why there wasn’t a better image produced, considering Macross Zero was released as OVAs from 2002-04. This area included some more signed art (off limits to cameras), and costumes and microphones from various singers – even Nekki Basara’s guitar re-imagined in 3D.

After that was the most dangerous part of the museum – the gift shop. Books galore, DVDs of some of Tezuka’s series, and several Bandai Valkyries: The VF-29 toy from the Frontier movies, Luca’s ELINT VF-25R from the Frontier TV series, and several examples of Bandai’s Perfect Transformation 1/72 VF-1 Valkyrie which came out just prior to my trip. While it was sorely tempting to buy the -25R and the VF-1 model alike, I still had to head to Kure later in the day and didn’t relish the idea of carting them around.

So I limited myself to books. A lot of books, including the two volumes of model kit box art by Tenjin . They were heavier than the Valkyries, but took up less space. The store also had awesome lenticular Astro Boy T-Shirts that did come in XL size (again room and weight were considerations) so I passed on those. However, I completed a request for a friend by finding a cookie tin with Astro and Uran on them . ¥12,408 poorer without the Valkyries, but money well spent. 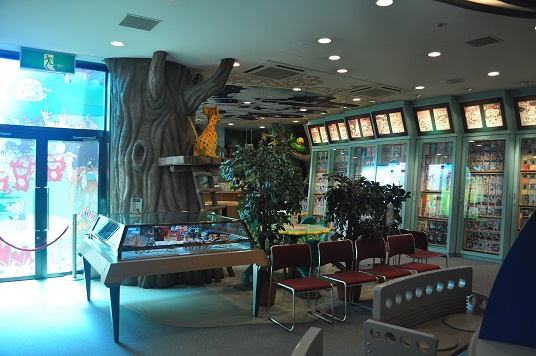 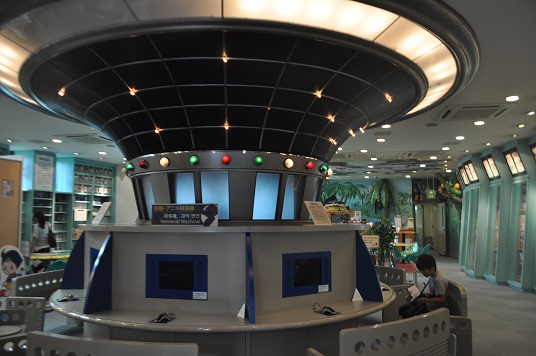 Past the gift shop lay the manga reading room and the cafe. From there it was around to the elevator down to the ground or basement floors. We took the stairs all the way down to the bottom level and another set of displays, including full-scale statues of Astro and Black Jack. Through to the back was the interactive area where we were invited to try the animation kaleidoscope. We were also invited to play with the animation computers, which included English instructions (the only English-language content we saw in the museum) but time was not on our side.

We needed to head for Takarazuka Station to trek back to Shin-Osaka and get a midday Shinkansen to Hiroshima for the trip to Kure and the Yamato Museum. As I took the lift back to the ground floor (the one with Astro Boy-themed door art), I wondered what it would have been like to have come here at the age of eight when he first gained my devotion every weekday afternoon. 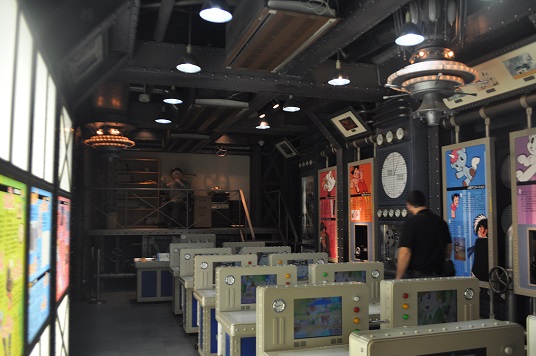 Definitely a must see for any anime fan, especially Astro Boy fans. To get there, I recommend taking a rapid or (preferably) limited express train from Shin Osaka to Takarazuka station. After coming out of the ticket gates, turn right onto the overbridge. Facing toward the shopping mall on the other side, you head left (there is a sign illustrating the direction). Go down stairs or escalators to street level and head downhill. There are two pedestrian crossings to pass in the same intersection, then another to cross further down the road just as you’re nearing your turn-off. Go across the road and you’ll see the front of a big park complex. (Do NOT venture in here unless it’s to wet your whistle at the vending machines just inside.) Go right and follow the road up the hill and around to the left. 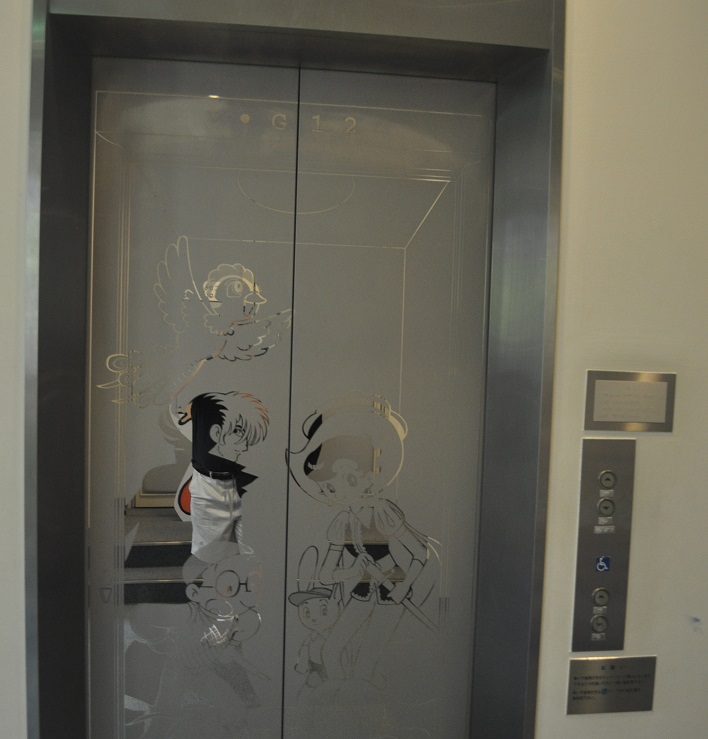 One of the glass/metal etched elevator doors in the museum. This one includes
Princess Sapphire, Phoenix, Black Jack, and Osamu Tezuka’s self-caricature.

I recommend you allow yourself one hour’s transit time between Kyoto and Takarazuka or half that between Osaka and Takarazuka, plus fifteen minutes’ walking time. I also recommend to allow at least 90 minutes to fully appreciate this place. There aren’t many better ways for anime fans to spend a couple of hours.

This ended our Tezuka Museum experience, but our day was far from over. We still had Kure on our itinerary, and had to make a connecting train!

Continue to Part 6: Kure, Hiroshima, and the End of the Kyoto Arc