November saw a marked decrease in activity, which must have been an even bigger relief for the production and marketing teams than for those of us who try to keep up with them. Most of what we saw was regular activity, but a whole new front opened up at the end of the month that stands to benefit everyone reading these words. We’ll get there at the end of this report. 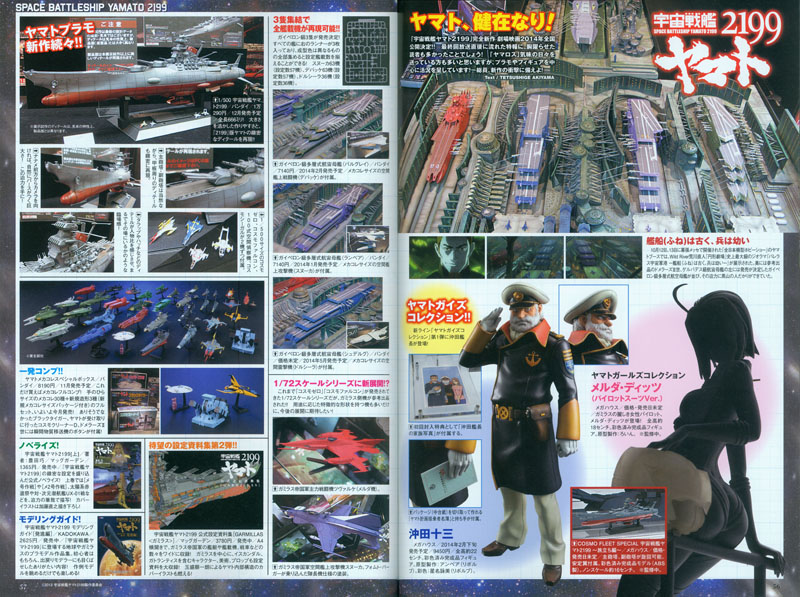 Hyper Hobby‘s customary 2-page spread was dominated by the dazzling sights at the All Japan Model & Hobby Show from mid-October, with another look at the Garmillas carrier dock built by modeler Wild River. 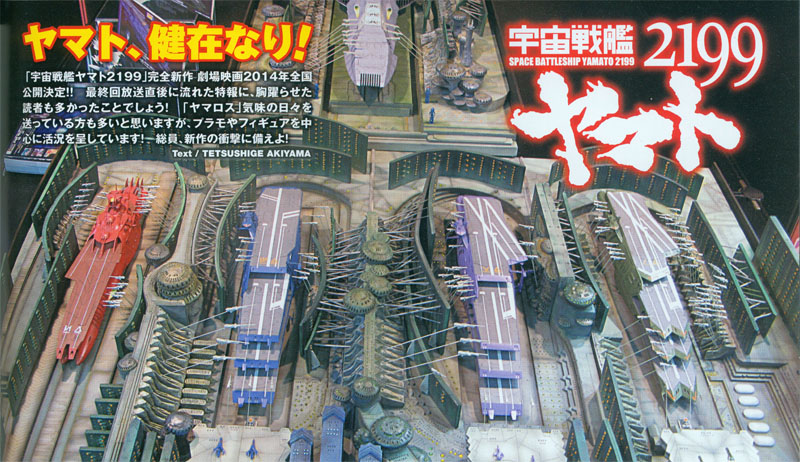 Also pictured were forthcoming figures from Megahouse and models from Bandai, including the enticing 1/72 prototypes of Garmillas fightercraft. Neither has been given a release date yet, but the second half of 2014 is wide open. 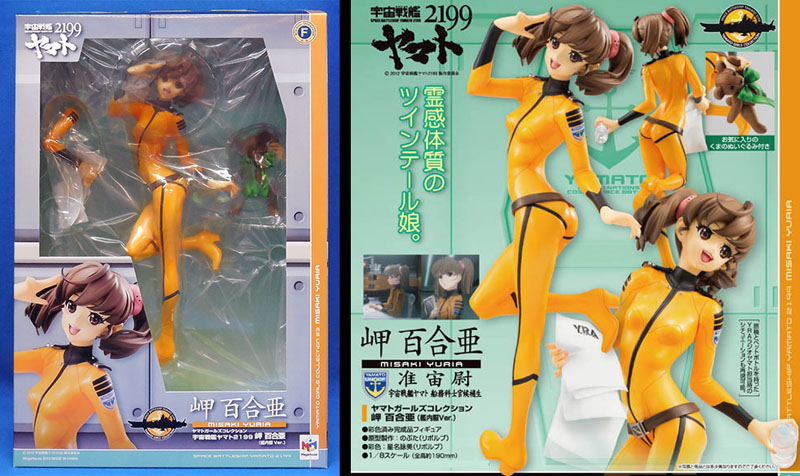 Megahouse added Yuria to the Yamato Girls Collection lineup after many long months of teaser photos in hobby magazines. At 1/8 scale, she stands about 7.5″ tall and comes with optional props to hold; a YRA Radio Yamato script, a water bottle, and a teddy bear.

Despite having no more 2199 episodes to live-watch and comment upon, the Yamato Girls’ online webcast continues every two weeks, providing a bridge to future events and carrying on their camaraderie. This show featured Sayako Toujo, Momoko Miyauchi, and Rio Nanase in their usual cosplay roles. They typically munch on Pockey sticks throughout a show, so one admirer in the audience sent in a box of gourmet flavors.

Time was spent examining the huge panoramic newspaper poster that came out in late October. The girls tracked the journey to Iscandar and back, commenting on the individual episodes, then took a look at the thousands of faces in the mosaic on the opposite side. Step back to Report 25 for your own look at this amazing piece.

Asked to name their favorite characters at the moment, Momoko chose Goeru (most likely for his final scene in Episode 25, which she re-enacted after seeing it). Rio choose Yabu for his heroic turn (in that same episode) and Nanbu for being one of the few characters who wears glasses. Sayako picked Miki Saijo for looking oh so cute in a swimsuit.

Another exercise was for each girl to draw her own image of what “Gatlantis” means to them. Sayako went for a firebreathing kaiju, Rio imagined a planet of insects, and Momoko drew a book of ghost stories. But it turned out the word brought something else to mind for her.

In a “performance” segment of the show, Momoko uncharacteristically broke out of her shell. Striking a cheerleader pose, she shouted “hey-hey-hey-hey-Gato-lan-TIS!” The others were crying with laughter at the sight, but put themselves back together for the signoff of this two-hour webcast.

There was some actual Yamato content as well, but it was essentially their own version of this report. 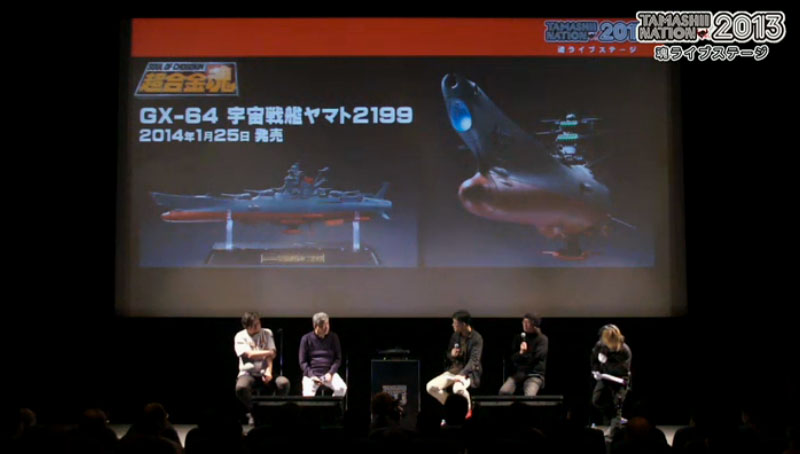 Tamashii is a Japanese word for “soul” or “spirit” and Bandai uses it to describe the work that goes into their most intricate and elaborate products, created by otaku for otaku. On November 3 a Tamashii Nations hobby show was held in Akihabara at which the forthcoming Soul of Chogokin Yamato toy soaked up some major spotlight.

A 45-minute talk was held on the topic of Yamato‘s enduring presence, and fans around the world could watch it live on a Nico Nico simulcast (which actually took place during the Yamato Girls’ program). The host was writer Hirokatsu Kihara (far right), who painted himself Garmillas blue for the occasion. The guests were (from right to left) director Yutaka Izubuchi, mecha designer Junichiro Tamamori, voice actor Takayuki Sugo (Captain Okita) and director/storyboard artist Shinji Higuchi.

After sharing their varied perspectives on the impact of anime’s most famous Space Battleship, the Captain himself gave them a launch order for a big finish.

Friend-of-the-website Antibiotictab was at the event and captured the display model for Youtube; see it here. 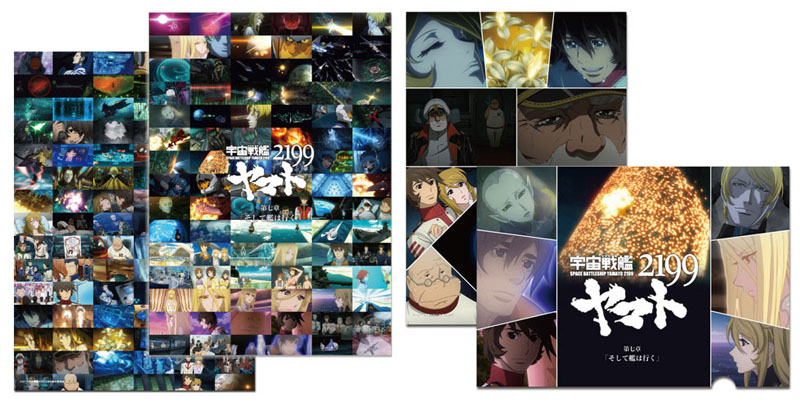 Although the rush of theater products that accompanied Chapter 7 was the biggest of the entire series, a few standard items were not included for unexplained reasons. The Yamato Crew website rectified that when these items appeared for direct order. 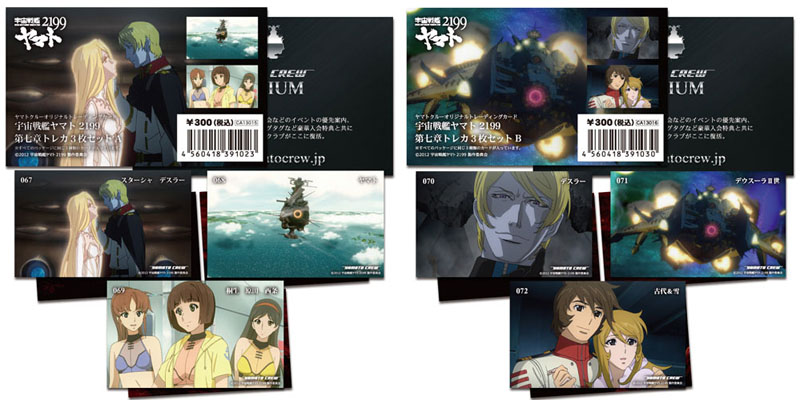 The image at the top of this entry shows two clear files with images from Chapter 7, and the one directly above shows two sets of trading cards. These have been sold in sets of 3 since the beginning, and other cards have been bundled with products available from the Yamato Crew site. There is as yet no information about how many cards form a complete set.

Fans with Japanese addresses (or helpful Japanese friends) have had the opportunity to join the Yamato Crew Premium fan club since spring 2012, and as one-year memberships got closer to their expiration date the club sent out renewal notices. To thank those who signed up for a second year, fan club headquarters provided the gift of a gold-trim keepsake binder for issues of Ship’s Log magazine, which closely matches a prop seen in the anime. It came with a note certifying another year on the crew, “authorized” by Captain Okita and Cosmo Navy Commander Todo. (And a trading card, natch.)

Round 7 of the 2013 Super Formula season brought Team Le Mans and the Yamato racer back to the track for the Suzuka Circuit. Car 7 driver Ryo Hirakawa qualified in 13th position on November 9 and finished 6th and 4th in two consecutive races the next day. 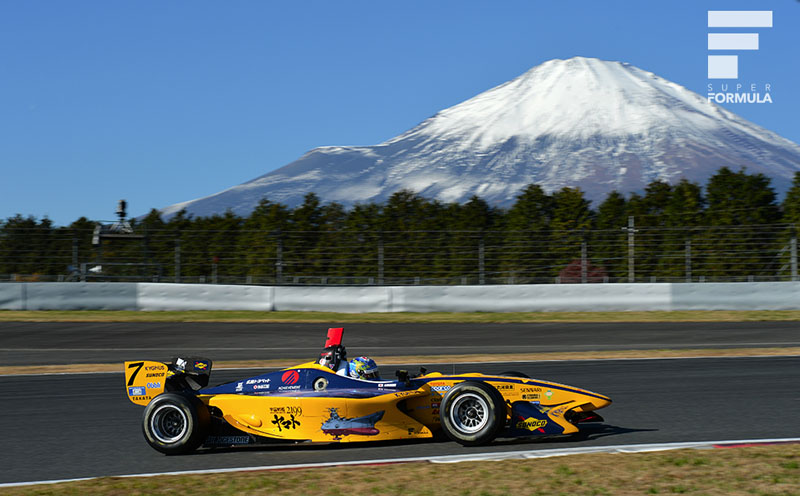 This was the last round before the season culminated with the Fuji Sprint Cup Grand Prix at the end of the month. For that, Hirakawa qualified in 11th position on November 23 and finished 8th on the 24th. His teammate finished 2nd in Car 8.

See a photo gallery for the final race here.

Will the Yamato racer take to the track again? We’ll find out in the spring of 2014.

For this show, Sayako Toujo and Momoko Miyauchi were rejoined by regular host Shiki Aoki cosplaying as Akira Yamamoto. After the usual banter, news, and comments on 2199 trailers, the game of visualizing the word Gatlantis was revisited. Sayako drew it this time as a ring around the Earth.

Momoko went even farther afield than in the previous show with what appeared to be snowmen, and Shiki ventured into psychedelia. Perhaps to reassure viewers that they weren’t imagining this, the show’s producer put up an image of the actual Gatlantis.

With that magic word on everyone’s lips, Momoko limbered up to repeat her breakout performance from last time and blew the roof off the joint with her “Hey-hey-hey-hey-Gato-lan-TIS!”

In fact, the spirit moved her to do it more than once, driving her crewmates into hysterics. Sayako barely managed to say goodbye.

Hobby Japan and Model Graphix had minimal Yamato news this month (3 and 4 pages’ worth respectively) but the photos made up for it with big shots of the 1/500 Yamato and figures from Megahouse’s Yamato Girls Collection, including a first look at Kaoru Niimi.

See the pages from these two magazines here.

Dengeki Hobby magazine was more generous with 13 pages that covered all the latest product releases and lavished attention on the next Bandai model kit, the Deusula II. It also provided the first print-media coverage of the upcoming Yamato 2199 “Crusade” card game, to be released in December. 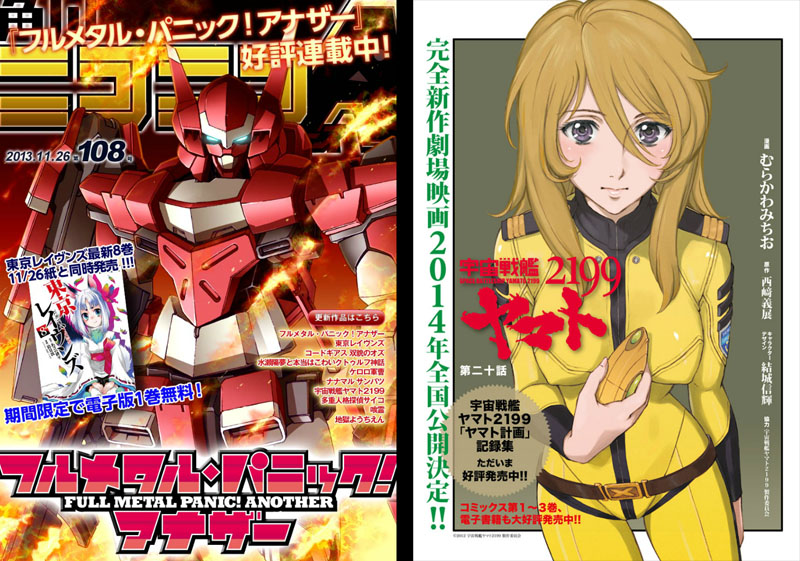 Issue 108 of the online Nico Nico Ace manga magazine published Chapter 20 of Michio Murakawa’s manga adaptation. In 32 pages, this unusually lengthy installment finally closed out the lengthy adaptation of Episode 7 and moved decisively into Episode 8, ending with the ecto-gas cloud bearing down on our heroes.

Megahouse released Hilde (and her pet) earlier than anticipated (it was previously announced that the Yamato Girls Collection figures would arrive monthly). On the other hand, it increases the gap between this and the next one, scheduled for March.

The fifth issue of the Yamato Crew Premium fan club magazine was loaded with inside info on Chapter 7. A copy did not arrive in time to be reviewed in this report, but will be covered next month. 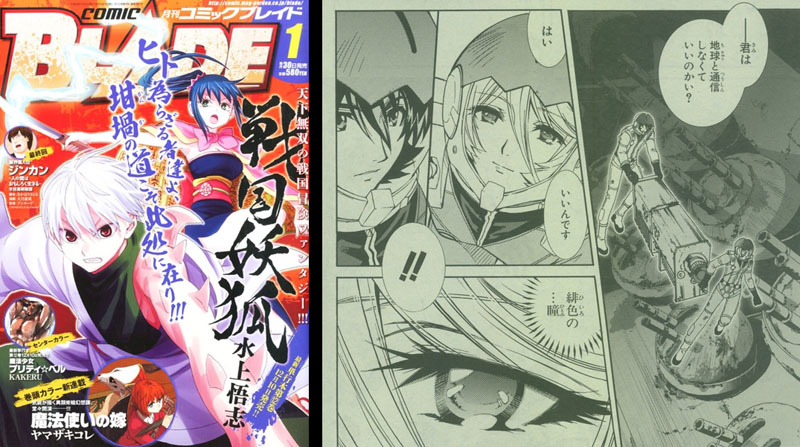 The fifth chapter of Mayumi Azuma’s Red-Eyed Ace manga continued her version of Episode 7, bringing Akira Yamamoto into close contact with Kodai on work detail and with Yuria Misaki as Radio Yamato goes on the air. 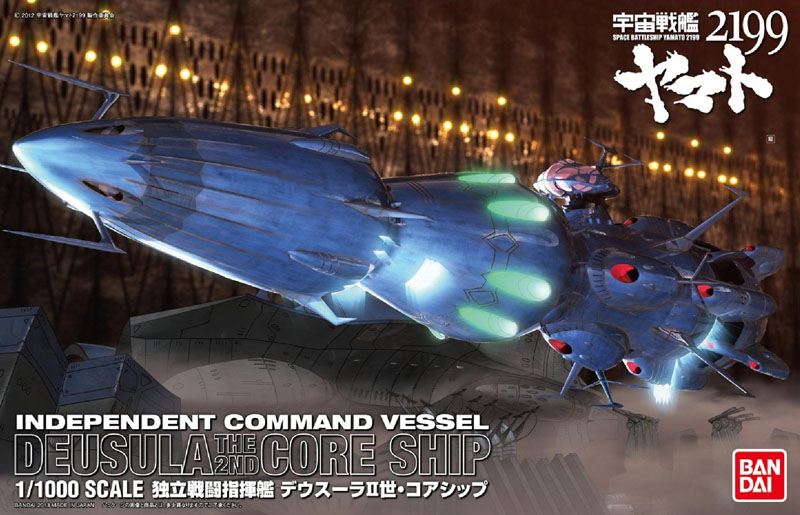 This was Bandai’s first model kit derived from Chapter 7. About 10″ long when built, it appeared in only two episodes and spent most of that time cocooned within a dreadnought. Nevertheless, it is based on Dessler’s iconic personal battleship from the original Series 1, which was released as a garage kit and in metal, but never as a plastic model. 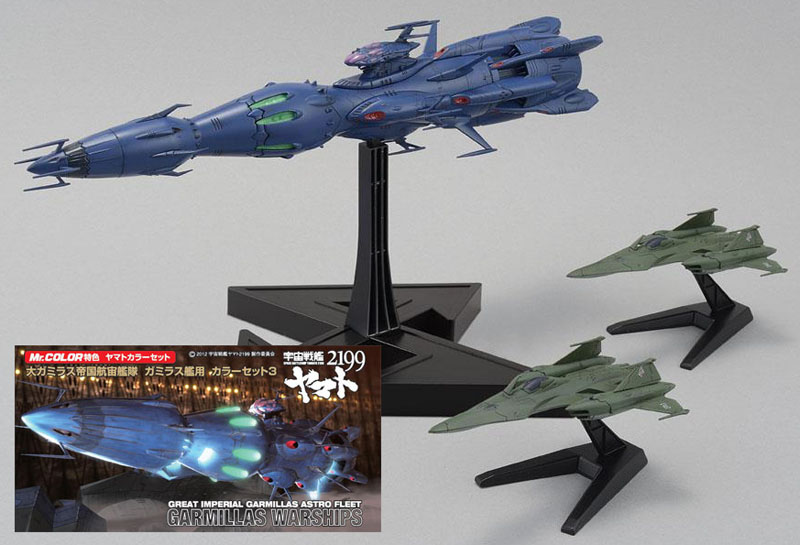 The ship came with two Zedora II fighters, based on another original Series 1 design that didn’t get rendered as a model. Incidentally, that name is based on one coined by Yutaka Izubuchi for a Galman-Gamilas fighter from Series 3; the Zeadora III – which in turn was based on the name Seeaddler, German for Sea Eagle.

Earlier in the month, hobby company Gunze Sangyo released a “Mr. Color” paint set for the Deusula II and other Garmillas ships (inset, above).