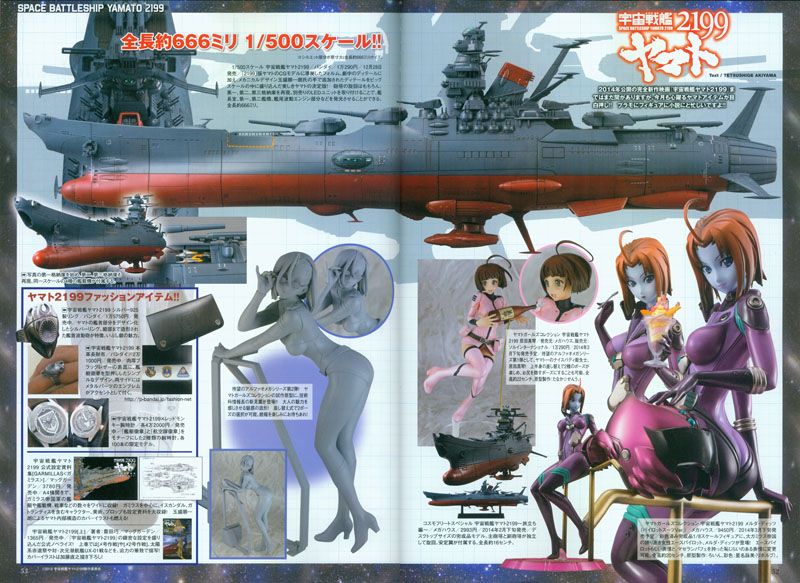 Usually arriving on the first of the month, this issue came through a day earlier and thus landed inside the November window. It became the second publication (after Hobby Japan) to reveal the prototype Kaoru Niimi figure from Megahouse.

This is not a 2199 product, but deserves honorable mention anyway.

The famous Yamato mini-kits have been in production practically non-stop since they first appeared in 1979 and boosted Bandai’s fortunes like nothing else before. From January ’79 to June ’81, thirty of them rolled out at the very affordable price of 100 yen each, which gave even youngsters the chance to build a collection. They were first brought together as a set in 2004 with each of their individual packages inside a single large box. This time the individual packages are gone, but there’s a very nice tradeoff for that.

The family now numbers 33. For the first time, three new kits have joined the lineup: Domel’s saucer (with a SMITE trigger), the Black Tiger, and the Cosmo Cleaner D. Close inspection reveals that this is not the same Cosmo Cleaner mini-kit that came with the 2001 Popynica Yamato toy. Bandai has not yet announced whether they will be sold separately. 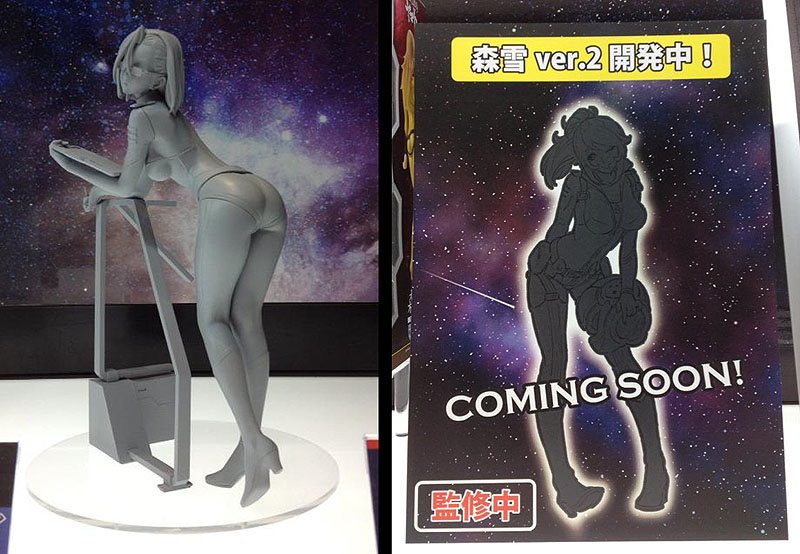 Held twice a year in Akihabara, the Mega Hobby Expo is the last big hobby show of the year, with its primary focus on figures. Megahouse used the occasion to put its ever-growing line of Yamato 2199 products into the public spotlight, including the upcoming Cosmo Fleet Special Yamato, the Kaoru Niimi prototype, and the first image of Yuki Mori Version 2. (Photos above by friend-of-the-website Antibiotictab.) 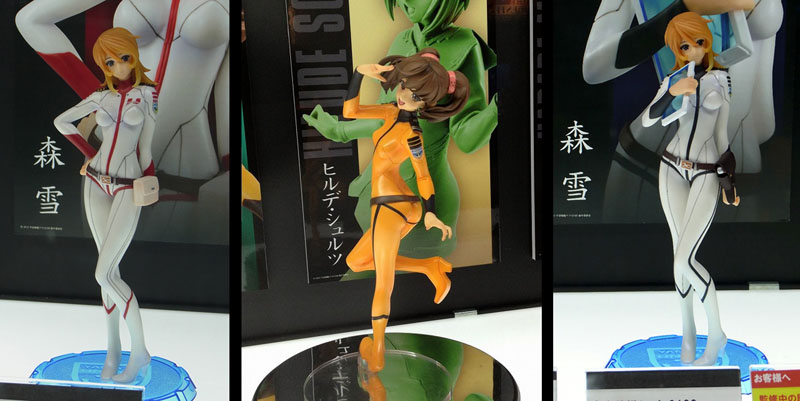 See video coverage of the event by Antibiotictab here.

To help promote their upcoming behemoth, Bandai released this foldout pamphlet to hobby shops and hobby shows. When opened up, it displays the kit at its full finished size of 666mm long, about 26.25 inches.

In case the news escaped your notice, the difference between this 1/500 model and the one released in late 2010 is the length they are based on. Because the previous one was “secretly” a 2199 kit, it was based on the original length of the ship (265 meters) which yielded a model just under 21 inches long. The ship’s length was actually recalculated at 333 meters for Yamato 2199, and this new model is based on that.

As soon as Yamato 2199 videos entered the market, international fans were eager for a box set, assuming one would be packaged up for release after the series ended. That sort of happened when the TV broadcaster MBS/TBS offered this box to those who purchased the discs from their website as they came out. However, it was not offered to overseas customers and was not available at any kind of discount. (Japanese box sets do not offer any price break, since video sales are still critical even after a production has wrapped.) 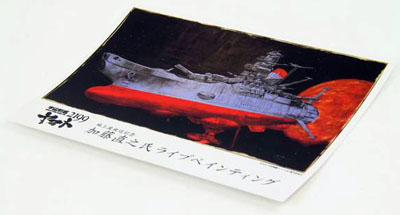 On the upside, the box did give everyone a beautiful new piece of art by Kia Asamiya (above), who also designed the end credit rolls for the TV broadcast. However, the episodes on these discs were the same as the commercially-available editions. The versions formatted for TV are not currently for sale. Also included was a postcard (at left) with one of Naoyuki Katoh’s live-painted murals.

Like the storage box offered by Yamato Crew, this one sold out quickly, but the home page for it can still be seen here. 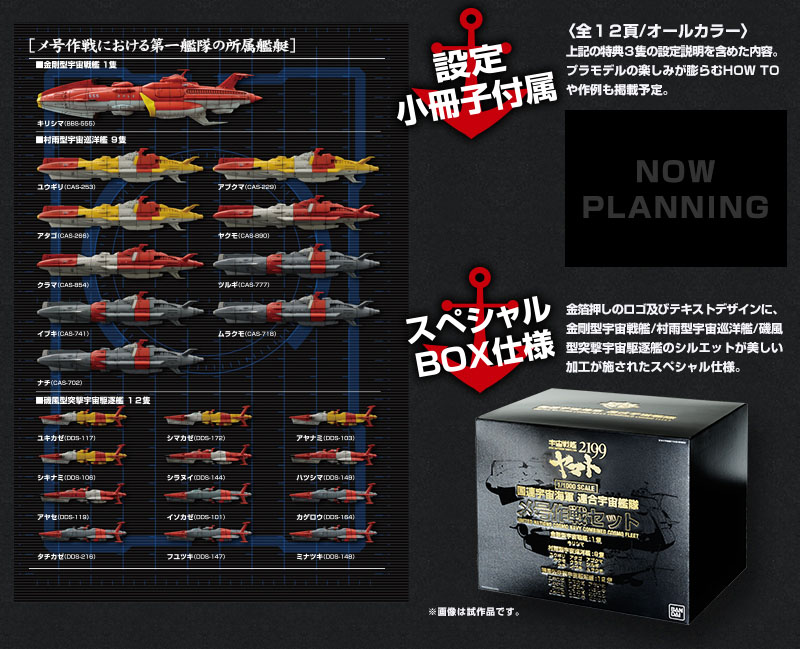 This set had shipped out earlier to those who pre-ordered them via Bandai’s premium website, but some time during the month of November it went into general release – a massive collection of 22 ships that comprise the UNCF task force from Episode 1 of 2199: Okita’s battleship, 9 cruisers, and 12 destroyers.

See an extensive photo collection of all these kits here.

A new round of colorful and creative doujinshi (fanzines) appeared in November. With the winter Comiket coming up at the end of December, an even bigger round lies in store.

See a gallery of these here.

Normally, these reports close with the end of a given calendar month, but something rather important occurred on December 1 (other than the one-year anniversary of this website) that makes it worth breaking this rule…

The month began with an unusually eventful webcast that brought all the Yamato Girls together for the first time in several weeks. It opened cold with Momoko Miyauchi by herself and the disco Gatlantis theme playing in the background. Those who had watched the previous two shows knew instantly what was coming, but were probably amazed to see her launch into a full-throttle dance routine before shouting her now-famous phrase: “Hey, hey, hey, hay, Gato-lan-TIS!”

The other three Yamato Girls walked on, shrieking with laughter and applauding loudly, then did a group-salute to officially start the show. One of the first orders of business was for Momoko to hold up a card saying that she had created the dance on her own with no official endorsement from the production committee or the composer, and without the involvement of a JASRAC-approved choreographer. (JASRAC = Japanese Society for Rights of Authors, Composers and Publishers.) In other words, it is now evidently the Yamato equivalent of twerking.

During the news segment, artwork was displayed that moves the Yamato 2199 franchise into the “kawaii chara” [cute character] realm. These new “deform” versions of the crew will appear on upcoming products, with the first wave scheduled for Winter Comiket in late December.

Extra attention was given to the “kawaii” versions of the Yamato Girls themselves, with a special offer coming up later in the program. Next, a card was held up to inform the Japanese viewers that a public announcement was about to be made in English. It would take 3 minutes and would be done in a single take.

The girls welcomed their friend Shiori Kawana back to the program. She had previously appeared in August, and was now being ushered in as the new Yuki Mori – and the official Yamato Girl for America. Having grown up in San Francisco, she displayed her fluency in English with an announcement English-speaking fans have been waiting to hear.

After introducing herself to the international audience, Shiori said that the official English language website, starblazers.com, will be greatly expanded on December 19 to include an online shop at which American fans can finally purchase Yamato goods, most especially Yamato 2199 itself on DVD and Blu-ray. The first of six volumes will be released in February 2014. (More info to follow, so keep reading.)

Shiori Kawana is a well-known model and pinup idol in Japan; visit her blog here and her website here.

With all five Yamato Girls present, newly-created “kawaii chara” illustrations were brought out for each of them to autograph. 30 sets of these autographed cards were offered for 2000 yen each on the Yamato Crew website, and sold out instantly.

Next, a photo was shown of an unusual custom-color version of the long-haired Akira Yamamoto figure from Megahouse. A limited-edition, white-suited Yamamoto is already available for pre-order at Yamato Crew (you can see it at the bottom right of the screenshot) but this one is painted in Garmillas colors with a Garmillas helmet. It is scheduled for May 2014; get a closer look here.

The next segment was a “pinup pose” workshop with Shiori coaching the others on how to present for the camera. Sayako Toujo and Rio Nanase jumped right in, but Momoko was reluctant and Shiki Aoki opted out completely.

On the other hand, everyone was game for a group shot to finish it out. Then came “drawing corner,” in which the Yamato Girls sketch out an impromptu cartoon based on a theme. The theme this time was to imagine what would happen if Domel’s drill missile attacked Yamato from a different angle. Sayako showed her drawing first, which was pretty devastating.

Rio and Shiori had similar ideas, but with slightly less damage.

Shiki came up with a spring-loaded drill missile that looked capable of being used more than once. Finally, Momoko’s version put all five girls in the drill missile’s path, but what caught more attention was her well-intentioned rendering of “America Hello,” which Shiori confirmed was less than accurate.

After a round of laughter and ribbing that rivaled the opening of the show, everyone came together for a closing salute and this 90-minute episode rolled across the finish line. 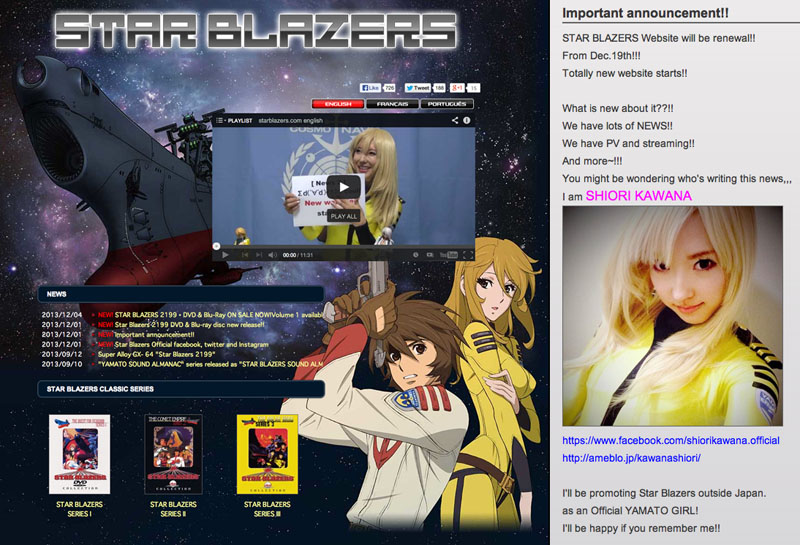 Right on cue, starblazers.com was updated with news announcements that matched what had been said on Nico Nico. Shiori Kawana is now the English voice of the franchise, and her first priority was to confirm that Yamato 2199 will be available on DVD and Blu-ray through the website under the name Star Blazers 2199, with preorders to open with the website expansion on December 19.

Visit the site here. The official Facebook page can be found here.

The next step was to pick up where Nico Nico left off. An 11-minute presentation video, almost certainly shot immediately after the December 1 webcast, put Shiori Kawana on camera alone to deliver announcements she wrote herself. Watching it can be either charming or painful depending on individual tolerance, but it leaves no doubt that this coming-to-America campaign is genuine. And not a day too early.

See news video 001 on Youtube here. (Subsequent videos have been added since then on a weekly basis.)

The real head-scratcher in this opening gambit was the math for how 26 episodes could fit onto 6 volumes at 4 episodes each. In recognition of this, Voyager Entertainment published additional news on December 4 to clear that up and reveal pricing details as well. Read the info here.

One week later, News Video 002 laid many fears to rest when it was revealed that no names would be changed in the subtitles. The only change is to the series name itself.