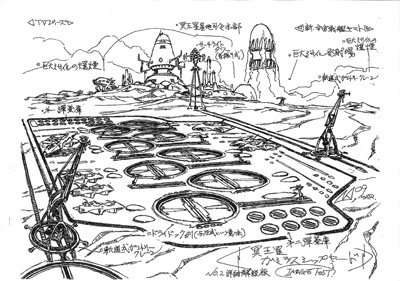 MC: This has been mentioned previously, but it’s been said that when the Yamato was drawn, for example in the design documents, Naoyuki Katoh was the only one who could draw the back of the ship while you only drew the front. Why was this?

Miyatake: Because we were short on time (laughter).

MC: It was just because the work was split up?

Miyatake: We really were short on time. As a studio, at Nue it was usually decided [in advance] who would draw what. So I drew the front and Katoh drew the back. However, my front didn’t really match with his back.

Izubuchi: They never actually connected [correctly]. While there were some scenes where they were connected, when you paused and looked at them the impression I got was that Katoh’s part was drawn rather sleekly, whereas Miyatake’s part was more dramatic. For Yamato 2199, we calculated the size necessary for the insides when working out the overall size of the ship. Actually, some of the numbers were a little fudged, but in general they make sense overall. With the original [Yamato] on the other hand, the insides of the ship were amazing[ly huge]. That circular part in the middle of the ship was like an observatory deck on the top of some fancy hotel! (laughter) 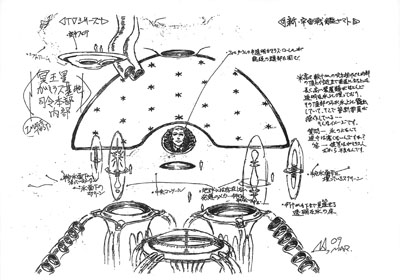 MC: What was it you said [previously]? The insides are twice the size of the outside? (laughter)

Izubuchi: Looking at the design documents, that room alone would have taken up 1/3 of the ship! (laughter). I used to wonder how it could fly! (laughter).

Miyatake: You did really well with [the design in] 2199 then.

Izubuchi: It was really tough! And I asked about who designed that [huge] room, but both Katoh and Miyatake said the same thing, “it wasn’t me!” (laughter.) It was suggested that maybe it was [Kenichi] Matsuzaki.

Miyatake: No, that wasn’t Matsuzaki. It was [Leiji] Matsumoto. I also helped with things like the bridge, since I usually drew the front of the ship. The way the observatory deck looked from head-on, that was Matsuzaki. But when it didn’t look right he changed it without complaint.

MC: And in the end, this way of doing things ended up with the best looking visuals. 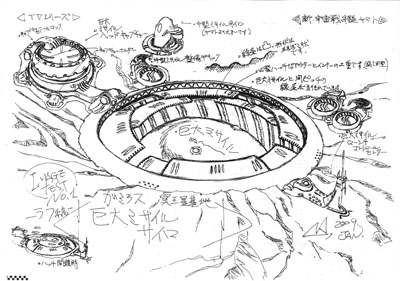 Miyatake: That’s for sure. However, well, when drawing the inside of fighter plane cockpits, we tended to draw them larger than they were. If you don’t draw them large it’s difficult to create the scene you need. So while doing a scene [in a cockpit] you start to draw the space larger and larger.

Izubuchi: On the other hand, I think that the more confined the design, the better. Confined spaces work well.

Miyatake: [Shoji] Kawamori has said something similar. (Translator’s note: Kawamori is the primary designer of the Valkyries in Macross.)

MC: (to Izubuchi) Is there some common point behind your and Kawamori’s views, then? Is it because you are both (mecha) designers?

Izubuchi: That’s kind of a simple way to put it. The sense of being enclosed, that sense makes it a good space to create a [good] scene in. Once you make it wider, while making the scene itself is easier, it’s difficult to get the same sort of atmosphere.

Miyatake: Although it’s OK if you are trying to create an animated scene with a sense of space. 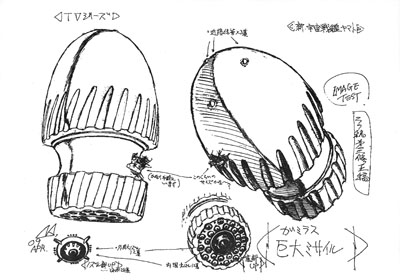 MC: We are running out of time, so let’s move along…

Izubuchi: I’ve been fairly quiet this whole time because I wanted to let Miyatake continue talking!

MC: Well, we’ve prepared some visual materials that I thought he could tell us about. (To Izubuchi) To start, I’d like you to explain [to the audience] why you invited Miyatake here tonight.

Izubuchi: I’m from that generation that was inspired by Studio Nue’s designs, and I think [Shoji] Kawamori was the same. Yamato 2199 ended up with a lot of staff who were similarly influenced by Studio Nue – [scriptwriter] Shigeru Morita, Yasushi Ishizu who did the Garmillas ship designs and originally got his start in animation with Orguss…there were many of us similarly influenced.

Miyatake: [Set designer] Takeshi Takakura was one of us as well. 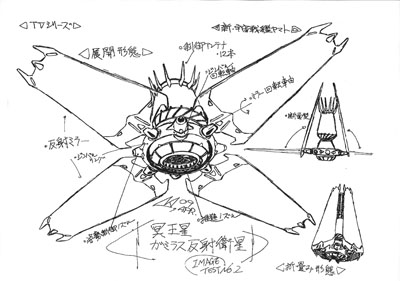 Miyatake: Ohnogi was one of Kawamori’s guys….

Izubuchi: Morai, who helped with the script was a classmate of Kawamori in high school and university. So with that in mind, I wanted to leave something [of Studio Nue’s legacy in 2199]. In the case of Miyatake, I wanted him to provide the characteristics for the overall concept of the show – not only for mecha, but rather for the overall superstructure.

MC: (To Miyatake) When you were originally invited on board, did you have any pre-conceived sense of what you wanted to do?

Miyatake: Actually, I was wondering what sort of work they could possibly want me to do. because [at first] they didn’t clearly say.

MC: So you didn’t know what your role was going to be?

Miyatake: Well, the one thing they told me was that they wanted someone from the old guard involved. To kind of look over things, I think. 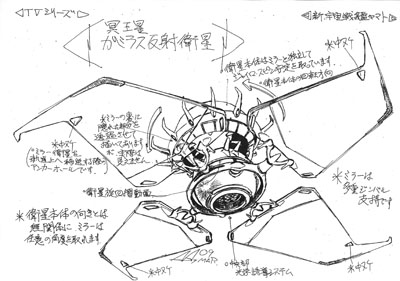 Izubuchi: We wanted you there to help educate the youngsters! To tell them “Yamato should be like THIS!” (laughter) If I tried to do that they wouldn’t listen, but having one of the original staff on board means that they have do! It’s not fair! (laughter)

At this point, the MC began going through a number of illustrations and design sketches on the cinema screen. None of these had actually been published in either the “Earth” or “Garmillas” design books since most were either extremely preliminary, or rejected designs. These included:

– Several variants of key image for Iscandar and Garmillas, which played with having the planets be different sizes – one version had Iscandar looking almost like a moon of Garmillas.

– An early design for the base on Balun. Izubuchi commented how the original concept was a tip of the hat to Cloud City (Empire Strikes Back) – a sort of “cloud base.”

– Some initial sketches of the jungles and plants of Beemela. Interestingly enough, a little known fact about Miyatake is that, despite being known for mecha design, he is also able to design and draw plants/flora very quickly. 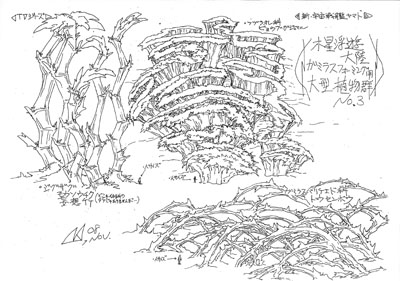 – An early concept for Second Baleras (with a note in big red letters from Izubuchi saying “make it more mechanical!” much to everyone’s amusement)

– Designs for the base on Pluto and the main control room.

By this point we found ourselves out of time, as usual, far too quickly, so Izubuchi and Miyatake left the audience with the following final words: 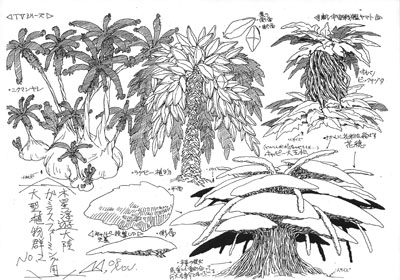 Izubuchi: Miyatake is normally quite harsh with his feedback, but while making 2199, we reached a point where he turned and said to me, “it’s finally become Yamato.” To receive such a comment from not only a someone who worked on the original, but who is also my senior in the field of animation and whom I greatly respect was praise indeed.

Miyatake: It’s been 40 years. Who would’ve thought that I’d still be drawing the same thing? But thinking back, about halfway through [the last 40 years] when I was doing some designs for a Playstation game in the 1990’s, I remember thinking to myself, “I’ve spent so much time doing this, what on earth would I do if Yamato were to disappear?” But when I saw the final product, I couldn’t tell if they’d used the work I’d done.

It was then that I realized Yamato will always be Yamato, no matter what. Whether it’s done in CG or whatever, that basic shape has this incredible appeal to it. There are elements that you just can’t change. Even if I think I’M the one drawing it, and this may be attributable to those of us familiar with Japanese machine design, even if I Intend to do it MY way, in the end there’s nothing to change. It has to be that same shape. 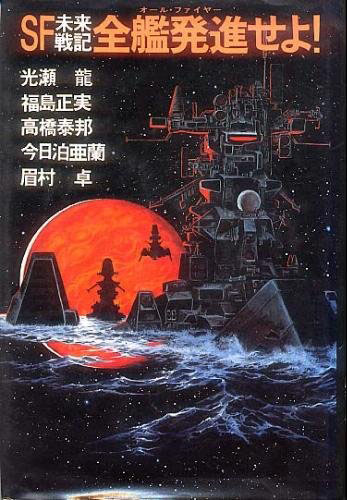 Izubuchi: Yes, Yamato is always Yamato. But I remember – there was that illustration you did that I really liked back in the day. If I recall correctly, it was for the cover of the hardcover edition of Launch All Ships. [SF anthology, Tokuma Shoten 1978.] It seemed to me that it was very Yamato-ish. There was a red star in the background and [despite being SF] the black ship in the forefront resembled a regular maritime ship, surrounded by what looked like the sea.

Well, unfortunately, when I was helping with Final Yamato, I showed it to Nishizaki. I showed it to him because of the ship. I was trying to convince him that we needed ship designs more like yours. Actually, he seemed to really like the picture so I thought, “I’ve done it! I’ve convinced him!” But then he looked up and said, “Hmmm, I knew it! Space is best when it’s an ocean!”

“No!” I exclaimed! “That’s not the point I was making!!” (laughter) So in the end, the reason we ended up with an “ocean” in space and the Yamato being “sunk” in it was all because of your original illustration! (laughter)

Miyatake: Hmmm, now I sort of wish I hadn’t drawn that. (laughter)

Izubuchi: I told him that that wasn’t what I meant though. Communication can be a difficult thing.

MC: (To Miyatake) Speaking of communication, how did you find Izubuchi to be as a director?

Izubuchi: This was actually the first time I’ve worked with you as a director. Previously we worked on Rahxephon. 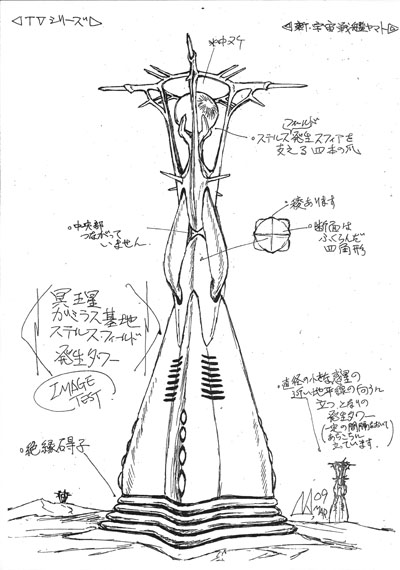 Miyatake: Well…um….kind of similar to [Shoji] Kawamori. Why is it that Mecanical designers that become directors always end up like this? (laughter) They pick apart the smallest details over and over again. It always takes two or three tries before anything gets approved. Well, [Shoji] Kawamori was the same as well, but it was always difficult to get Izubuchi’s approval [of designs]. (laughter)

Izubuchi: It’s like I mentioned previously. I felt that Miyatake had this sort of aura. He would be like, “Oh, so you think that’s OK, do you?” That’s what I felt.

Miyatake: As a designer, one is never satisfied when the first version of a design is approved. You need to be rejected a couple of times to really bring out your best work. I remember when Syd Mead did that design for NHK for Remnant. When he presented the design, the staff just accepted the initial version with a big thank-you and no criticism. He looked so disappointed, or so I’ve heard.

MC: Well, now we really are out of time, so could you each give us a final comment?

Izubuchi: I wanted to give Yamato 2199 a sense of having Miyatake’s mark on it to at least some small extent, and since he has been kind enough to be involved I think I’ve managed to do that, even though it may not have been easy and may have ben tough on some of the staff (chuckles). Because of him we managed to create the sort of imagery that we showed earlier (during the slideshow). Although I’m sure he will get to draw the same stuff yet again in new video games and the like. (laughter)

Miyatake: I’ll probably be asked to do it again for some new Yamato project 40 years from now.