Next spring – Yamato will finally disappear forever before our eyes. Now, the animation of The Final Chapter is advancing. This time, we hear from Yamato Producer Yoshinobu Nishizaki, who is busy as a director overseeing the work, and we also get the main staff into a roundtable discussion. 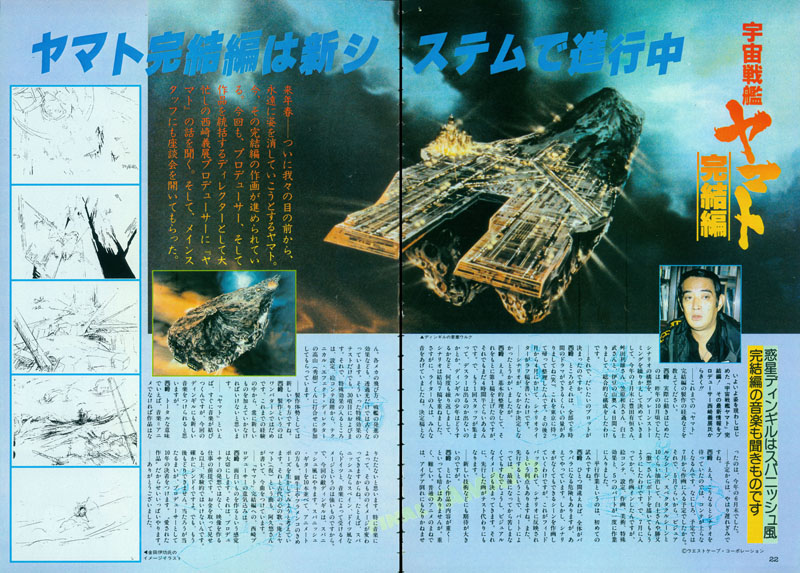 In The Final Chapter, Spanish-style music is heard on Planet Dengil

The conclusion of Space Battleship Yamato has finally begun to appear! We hear the latest information from Producer Yoshinobu Nishizaki!!

Interviewer: Please tell us about production progress for the Yamato Final Chapter.

Nishizaki: It was really around October of last year that it began to move. We did repeated brainstorming and decided on the concept of the script, and at the end of January this year, I spent four days in the Izu mountains writing the overall composition with Aritsune Toyota, Toshio Masuda, Kazuo Kasahara, and Takeshi Shirato

Interviewer: Then, was the rough plot decided upon there?

Nishizaki: However, there was so much that it would be better to make it a six-hour story. (Laughs) We brought it back to Tokyo and arranged it. The scriptwriter wrote the rough draft after that, from February to April.

Interviewer: I heard that the script was not easily decided.

Nishizaki: Yes. Although the first draft was based on the basic arrangement, there were still at least four and a half hours left. When the staff got back together, we debated many times whether or not Dessler would appear, or what the Dengil boy would do, and seven drafts of the script eventually accumulated. As expected, each of the writers made some noise. It was finalized at the end of June of this year.

Interviewer: According to the schedule, there is a slight delay.

Nishizaki: Yes. While you’re waiting on the script, the storyboards cannot begin. Anyway, the animation was scheduled to begin in July. So, around the month of May, I extracted ten spectacle scenes for their visuals and had Takeshi Shirato and Geki Katsumata start drawing image boards. At the beginning of July, the five areas of storyboards, design, animation, art, and special effects all started at once.

Interviewer: This is the first time for parallel work.

Nishizaki: If there is one mistake, there is the risk of it all falling apart, but I took it. However, even if scenes are drawn without a script, it also has the benefit of providing feedback for the script. Also, by proceeding with all the parts, visual images are decided and there probably won’t be as much trouble near the end. Proceeding with the animation replaces testing.

Interviewer: There are great expectations for the new techniques.

Nishizaki: This is a dark way to say it – the content of the work is heavy. Heavy and difficult. If we imitated normal anime, the idea would fall apart. The method of flying each mecha as well as the effect of a battleship launching with only transmitted light is simply out of date. The testing of special effects alone came to about 30 items. So at the stage where special effects appear in the designs and storyboards, I had technical effects director Hideki Takayama participate in meetings.

Nishizaki: One-track production is useless. From past experience, I think you always have to add something new.

Interviewer: Speaking of Yamato, I’d like to go into the music, and I believe some new music is being added for Dengil.

Nishizaki: I think that in terms of the total meaning, a work cannot be fully realized unless anime = music. The images of things change depending on music in particular. For example, if Spanish is Spain and German style is Germany, a strong image is received through music. This time, the enemy Dengil is done in a Spanish style. In the way a Spanish guitar has ten strings lined up, I intend to make use of flamenco and bullfighter poses in the animation style as well. As for the songs, there’s one [provisional] from the heart of Kodai called Me and Yamato, now being written by Yu Aku.

Interviewer: You have great enthusiasm for The Final Chapter.

Nishizaki: I cherish the sense of making interesting things. Rather than the idea of the producer, making images is a prerequisite of the job. If it was only being made for money, it wouldn’t be experimental. It is laborious, to be sure. But there’s no turning back. Right or wrong, it settles my ten years as a producer. Because this is a “much-loved work,” I go as hard as possible. 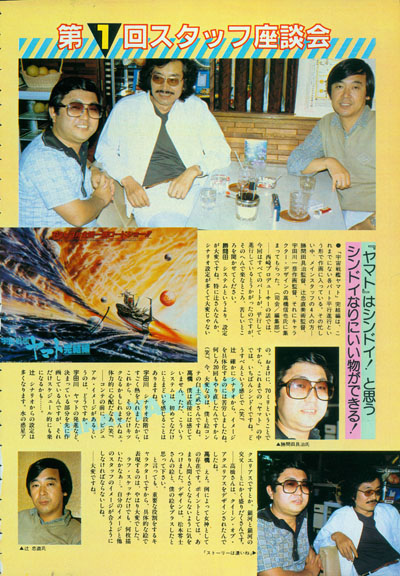 Each part of the drawing for Space Battleship Yamato The Final Chapter is progressing in an unprecedented parallel production process. During this busy time, we got four of the main staff members to gather together: Director Tomoharu Katsumata, Art Director Tsuji Tadanao, Animation Director Kazuhiko Udagawa, and Character Designer Shinya Takahashi. (Moderator: editor)

Interviewer: This time, Producer Nishizaki talked about all the parts of production progressing in parallel, so it should be easy for you to share the pain.

Katsumata: Rather than the system, the design is hard. Especially for Tsuji, since he has a lot of script setups. Also, because it is in 70mm, it is more laborious than previous Yamato. You get the feeling of, “How are we going to do this?” (Laughs)

Tadanao: I surely had a hard time realizing images from the script. Also because they were redone 20 times. (Laughs) It’s hardest right now for me and Takeshi Shirato, who is doing storyboards.

Takahashi: I don’t feel it directly. However, this is a system that makes me feel confused for the first time.

Udagawa: In the scripting stage, I got a really bad fever, so I think that part may be kind of tough for me. I am physically anxious. (Laughs)

Interviewer: What about the visual images before the storyboard?

Udagawa: I drew the fixed parts earlier, including the launch of Yamato, to make it easier on the schedule…

Tadanao: The designs from the script are increasing. Such as the water Planet Aquarius or the galactic collision – lots of them.

Takahashi: Yes. As usual, there is a goddess. On that point, I was careful not to make her feel too human. For my design, I thought about the images of Leiji Matsumoto and it plussed-up my work. Since it is a character with an important role, it was difficult to express in a specific drawing. A lot of rough sketches were drawn, but my own image has to match that of the staff. 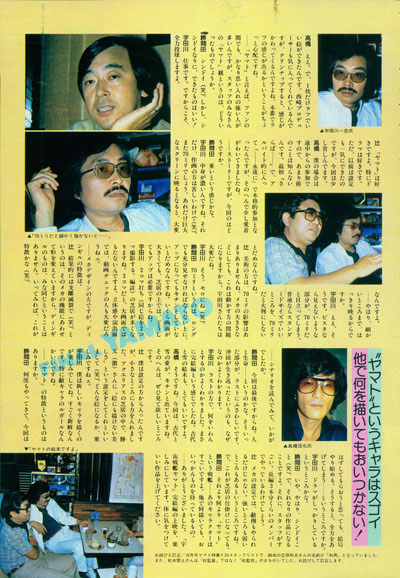 Takahashi: Yes. It ended up that only one good picture came out of the roughs. Producer Nishizaki and I both liked it, but when it was cleaned up the feeling changed. I’m a little worried about whether or not the feel of the rough will come through in the production.

Interviewer: When you talk about Yamato, even between fans, there are many people who have intense, strong feelings. How do members of the staff view Yamato?

Katsumata: Laborious. (Laughs) However, something that is labored over is good!

Udagawa: It is our job. Therefore, we make every possible effort.

Tadanao: I like Yamato. Especially the drama. I was able to design at a stretch before, but it’s a bit more painstaking this time.

Takahashi: Since I participate in the middle, I don’t know much about what comes before that. I started as a part-timer on Farewell and went to full-fledged participation on Be Forever, and there’s some passion around here.

Katsumata: It has a heavy feeling.

Udagawa: The content is dark. That’s one reason the drawing is painful. (Laughs) In addition, it will be in 70mm. When it’s projected on such a big screen, it’s pretty daunting.

Interviewer: Because all the smallest things can be seen clearly?

Udagawa: Yes, that’s right. Something that doesn’t show up in Vista becomes conspicuous in 70mm. In places where it would normally be good in standard size, it’s no good at 70mm.

Tadanao: 70mm has a huge influence on the art. How the mecha moves and how big it has to be is a serious problem for Mr. Udagawa and the others.

Katsumata: For 70mm, not only do you have to show enough in long shots, but you have to be careful in the close-ups, too. However large the screen may be, in terms of the work, improvement is absolutely necessary.

Udagawa: There will be more double-framing (Editor’s note: shooting the same image two frames in a row). But you can’t do triple-framing on a big screen. In the feeling of three-dimensionality and the production, it’s also tough on the people who have to check the animation.

Interviewer: In the mecha design, the Dengil have many characteristics.

Tadanao: As a result, it’s incoherent. (Laughs) This is because since the form of the mecha changes in accordance with function, not everything on Dengil is the same. In some sense, those are the characteristics. (Laughs)

The character called Yamato is incredible! Nothing else comes close to drawing it!

Interviewer: How was the script when you read it?

Katsumata: This time it’s the end. The people and life – this part is appropriate for the ending. It is well-understood why Okita revives.

Udagawa: At the end, I understood what it was saying. It has the right feeling for a final chapter. The ending for Kodai and Yuki is very good.

Takahashi: That’s right. The love of Kodai and Yuki comes out properly this time. You should definitely watch for that.

Tadanao: Although I looked at it from a design standpoint, there is also emphasis on the little things. Mr. Katsumata called on me to design “a beauty that can’t be drawn in a picture.” (Laughs) I’m looking forward to what kind of picture it will become.

Interviewer: Does it have the Yamato characteristics?

Katsumata: It comes up repeatedly, which it would do even if we tried to take it out this time. This is the place – where we’re doing what’s called making every possible effort.

Udagawa: Maybe that’s what they mean when they say drama takes dedication.

Katsumata: No, more like exhaustion. (Laughs) It is becoming a work all its own. And the staff is great. They’re probably doing the work of three movies.

Tadanao: In the mecha concepts, the enemy side doesn’t just get blown up. They have their strong points and also their weak points. It comes out as a mechanism of the film.

Interviewer: Thank you very much. I look forward to seeing The Final Chapter. Please take good care of it in your work.

Apology and correction: in the staff list on page 25 of our October issue special feature. The name of Kazuo Kasahara on the script became “Kazuo.” Also, Leiji Matsumoto was mistakenly credited as “total supervision” rather than “general director.” We apologize and correct it. 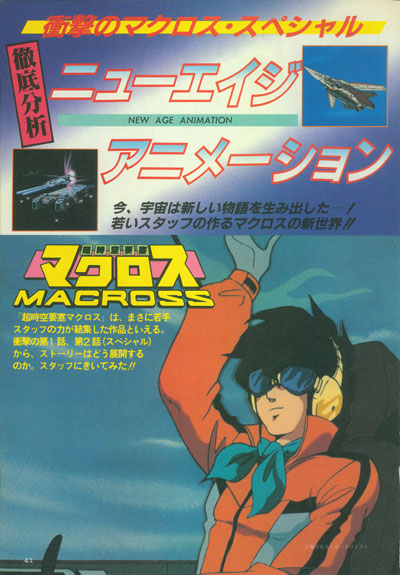 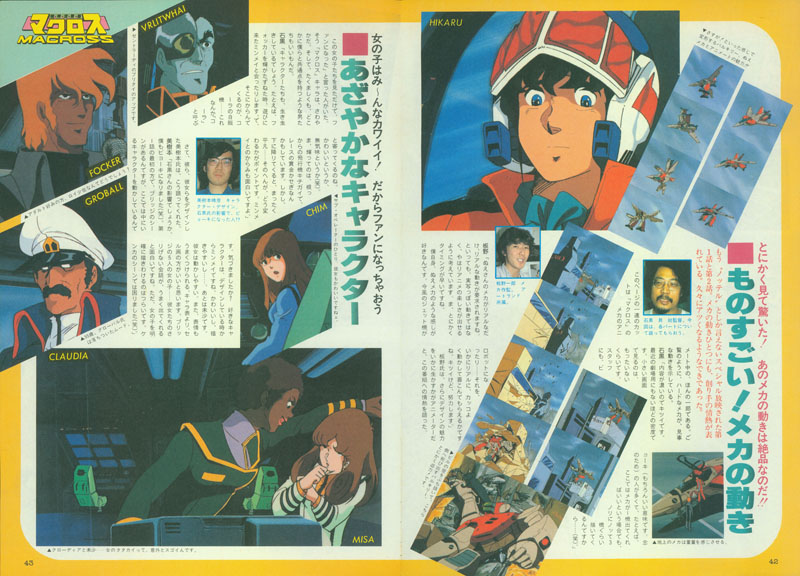 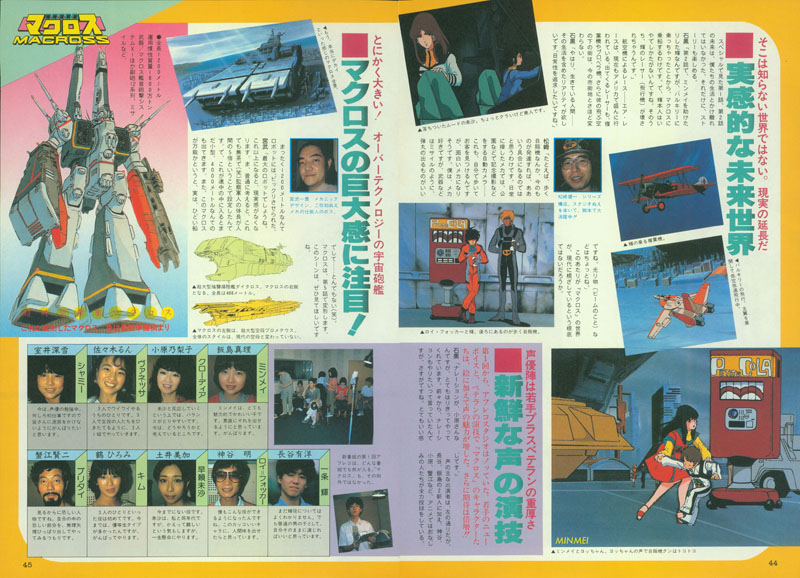 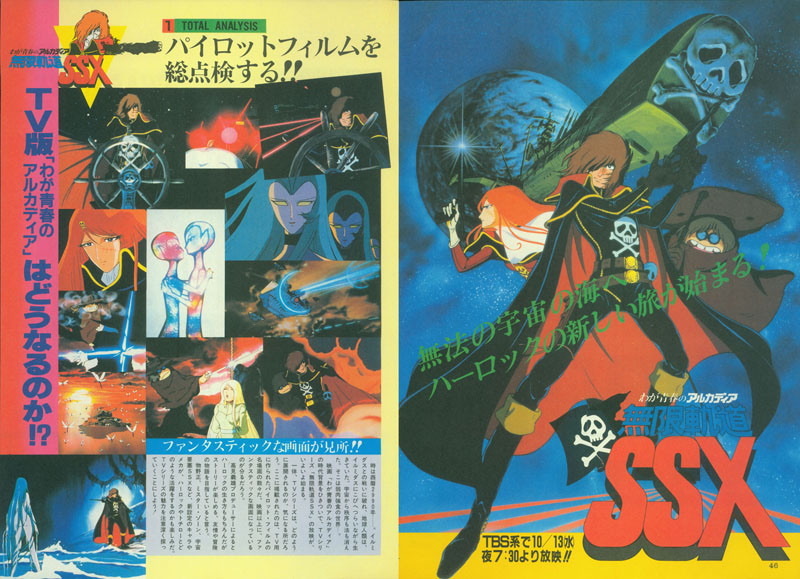 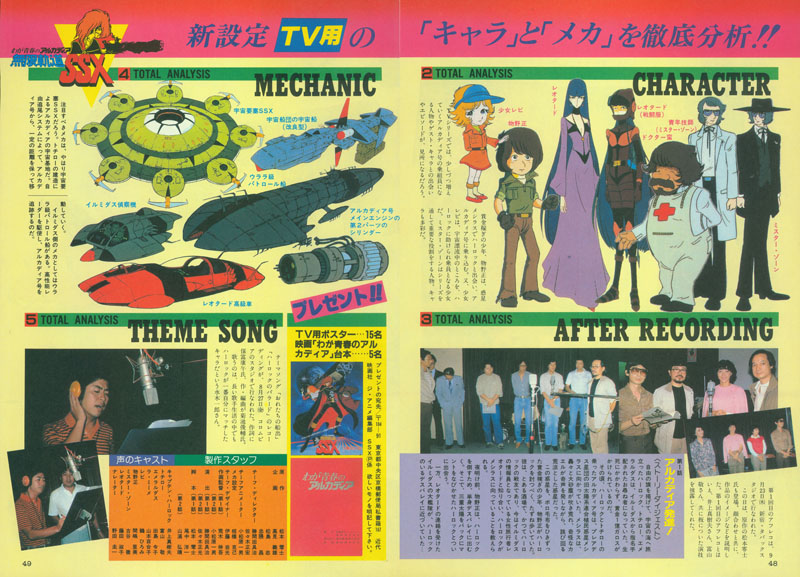