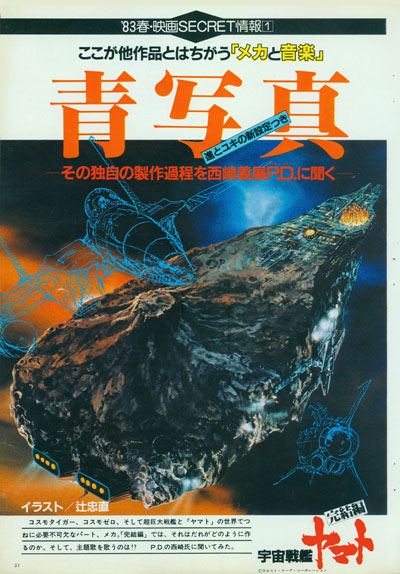 Here, unlike other works —

With a new design for Kodai and Yuki

We asked producer Yoshinobu Nishizaki about his own production process

Cosmo Tiger, Cosmo Zero, and the giant battleship Yamato; mecha are always an essential part of the world. How are they made in The Final Chapter? And who sings the title song!? We asked the Producer, Mr. Nishizaki.

It was designed in the image of a (large) 1950s steam locomotive. This is because locomotives and a form that leads to a streamlined ship are some of my favorite things.

To make sure there is no mismatch with Tsuji Tadanao’s design of the large-size battleship, although it has a feel similar to a large bow, basically it’s my sort of mecha that emphasizes the mechanics.

A human standing on a bowl-shaped hovercraft mecha was common in old SF movies. This mecha was drawn by relying on such memories.

Since mecha comes out of the giant Uruk, the first image to be done was of a massive carrier. Also, the request from Mr. Nishizaki was to give it a sense of reality. While keeping that point in mind, when I thought about a mecha that could hold various things, it became a design with lots of curves. 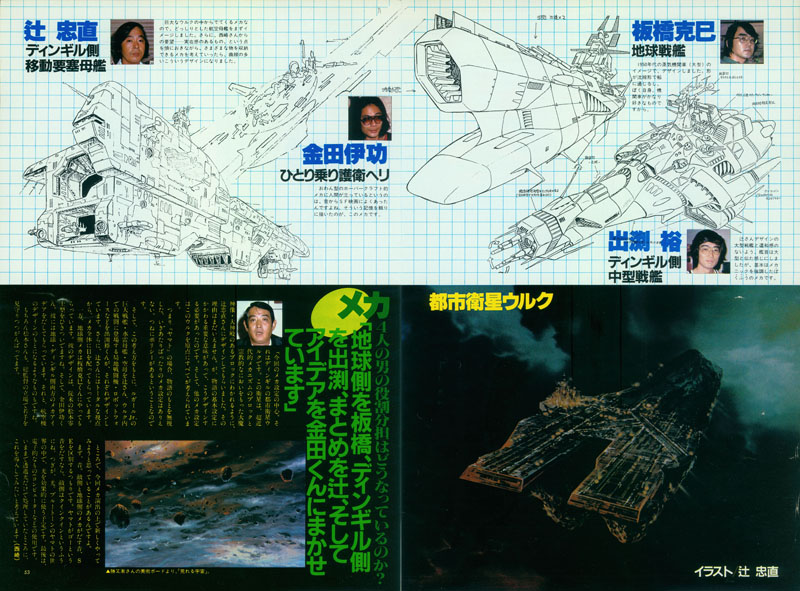 How are the roles of four people divided up? “Itabashi does the Earth side,
Izubuchi and Tadanao do the Dengil side, and I leave Kanada to his own ideas.”

In the center of the mecha design is Dengil’s city satellite Uruk. It has the image of a large, malevolent deity divided into a block of ultra-modern mecha and a block with a large temple to give it a religious tone. I had Mr. Tadanao divide the design into blocks. I can’t say the reason yet, but it has an important meaning related to the basic concept of the story, so it was necessary to design it this way. As for the other mecha designs, Uruk is considered to be the starting point.

In other words, in Yamato we can’t ignore the basis of the story since there cannot be haphazard mecha design. That is the policy at all times.

Based on this way of thinking, Tsuji Tadanao designed the huge battleship, torpedo carrier, and aircraft carrier, and Yutaka Izubuchi did the short-range fighter and robot horse that appear in a battle on Uruk. Also, I asked Mr. Tadanao to keep a close eye on all the mecha from an overall viewpoint.

On the other hand, I asked Katsumi Itabashi to do all of the Earth mecha. His design picks up where Leiji Matsumoto’s left off. As for Yoshinori Kanada, I asked him to work on mecha ideas for both the Earth and Dengil sides. That’s what underlies the aircraft design. Of course, Mr. Matsumoto is also doing his best, watching over the work as a general supervisor. Out of this mix, I hope to get a new mecha direction this time.

First, there is the sound. I plan to distinguish the sound effects heard on the enemy side and the Earth side. If Yamato makes the sound “go…” the enemy side would sound like “kuin-kuin.” Next is light. In the world of Yamato, the lighting makes effective use of a blue tone. Lastly is the use of electronic things (computers, etc.). Until now, it has only been treated with transmitted light, but we are thinking of improving this. 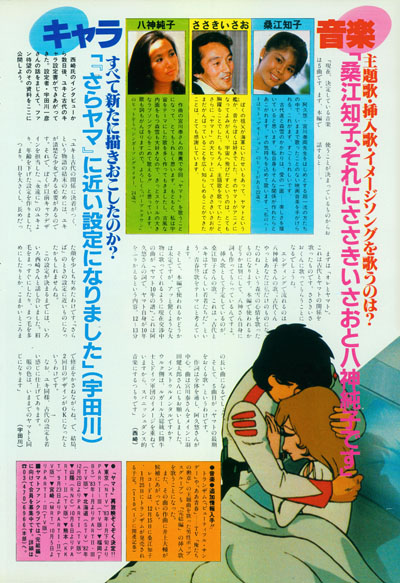 It has been decided that there will be five songs. I’ll start with the ones that will be used in the film.

The first is Yamato and I. This is sung about the relationship of Kodai and Yamato. I will have Isao Sasaki sing it.

The flowing end song will be by Junko Yagami. It will sing the Yuki Mori’s feelings of, “Kodai-kun, finally you are all mine.” I haven’t decided yet if it will be in the film. Yagami-san will write the lyrics herself, as well.

The song of Tomoko Kuwae is planned as an insert song. This is about “the wonderful youth of Kodai and Yuki,” and I think it will be a theme that praises young people.

And though it is undecided whether or not it will be in the film, I’m currently negotiating with a big-game singer to do an amazing song, Yamato Song of Ten Years. The content of the lyrics by Yu Aki look back on ten years of Yamato. It will be a long song, 12 to 13 minutes.

The fifth piece is a song that “sees Yamato off on its last moments.”

As for the lyrics, Yu Aku is always at the center. The main music is by Kentaro Haneda and Hiroshi Miyagawa.

Because the Uruk side combines the image of a bullfighter and the German army in Emperor Lugal, I plan to use Spanish dance music.

Among superb people, including both [lyricist] Yu Aku and maestro Hiroshi Miyakawa, I’m working on film music, which I’ve never done before. First of all, I’m very happy. I think that the relationship of Susumu Kodai and Yuki Mori depicts the beautiful side of love. I, myself, long to create such a relationship and sing with feeling.

Partly because my grandfather was in the navy, I’ve liked the ship called Yamato for a long time. When Yamato was revived as anime and leapt out into space, my heart raced. Of course, by singing the theme song for the big hit of Yamato, I was able to show far and wide that Isao Sasaki was still working hard, and I’m very grateful for that.

I’m very glad to sing for Yamato this time on the recommendation of the composer, Hiroshi Miyagawa. From the beginning, I have also made many songs with space as a theme, and because I love Yuki Mori’s old-fashioned spirit, surely I can sing an epic love song with all my heart! I hope so. Since the song and lyrics are the best, I’ll try my best. (24 year-old singer-songwriter of the hit Purple Town.)

Are they all newly drawn? “The designs were set up close to how they looked
in Farewell to Yamato.” ( – Udagawa)

A few days after our interview with Mr. Nishizaki, the character design documents for Kodai and Yuki were completed. Along with an account from the designer, Kazuhiko Udagawa, we show the fans’ long-awaited material here.

For the ending of the story that culminates the relationship of Yuki and Kodai, Yuki has to be a neat and tidy girl. So, compared to the Yuki of Be Forever Yamato, for which I took charge of character designs, I did a design that lowered her age. In other words, her eyes were enlarged and her face is a little longer. It may be closer to the design in Farewell.

I discussed many things with Mr. Nishizaki before this design was decided. Her eyebrows were straightened or her eyelashes were made a little larger, and one revision piled up on top of another. After all that, the second design became OK after all.

In addition, the design of Kodai was given a younger touch, similar to Yuki.

The color of the clothing is the same as in previous Yamato. 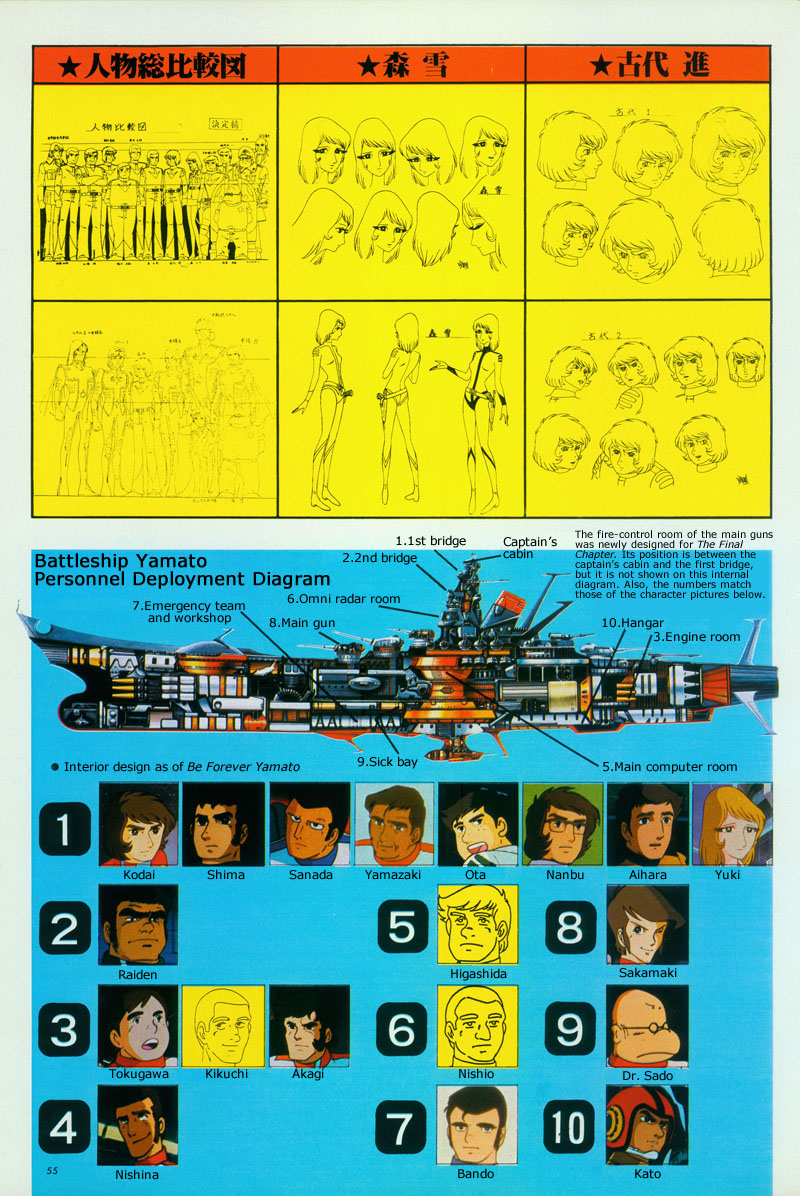 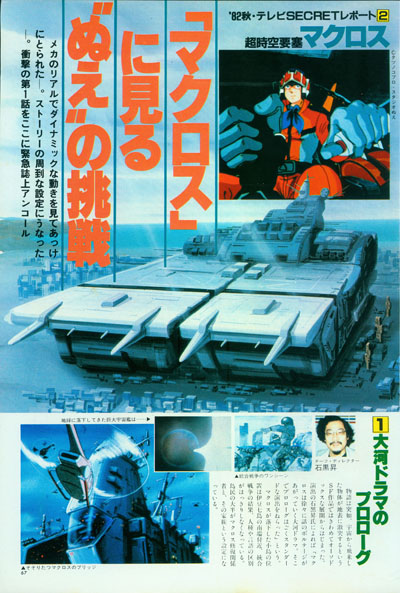 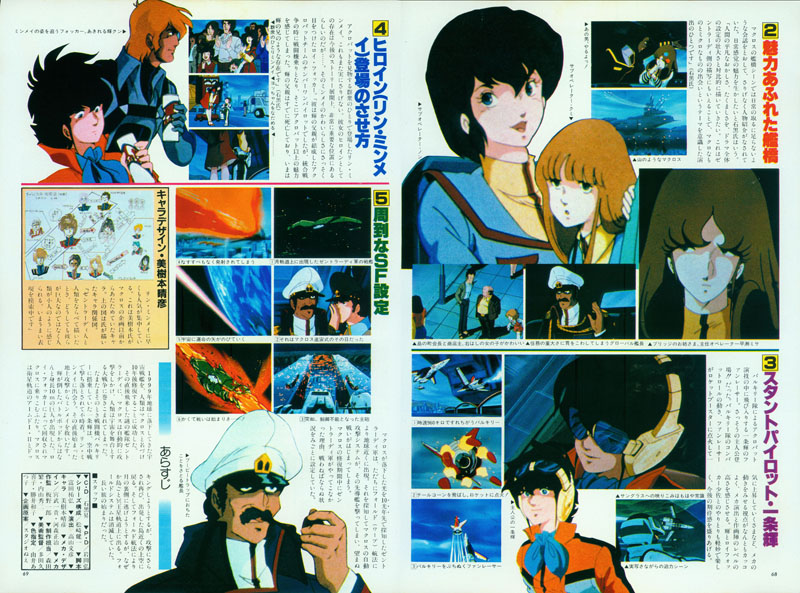 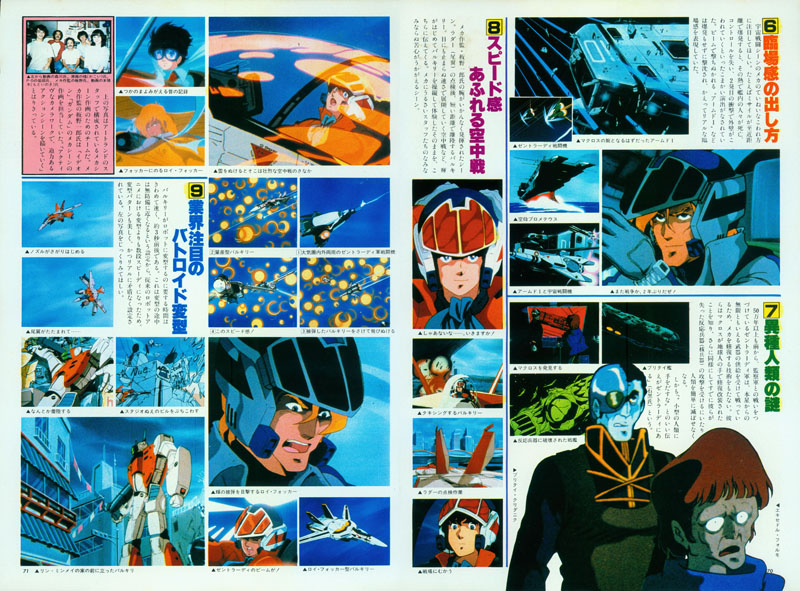 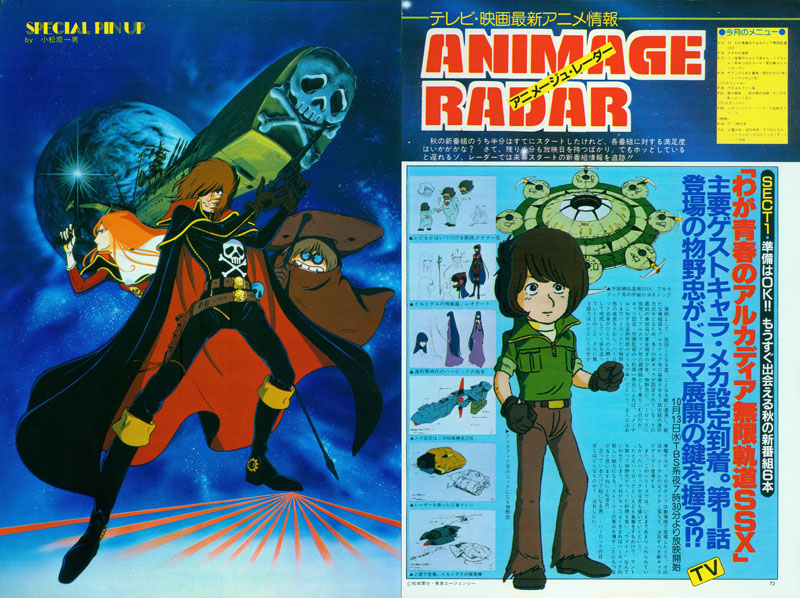