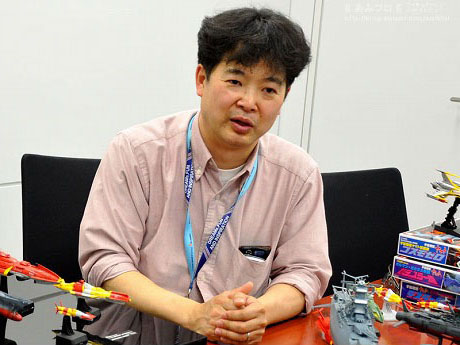 Since releasing the Bandai 1/350 Space Battleship Yamato model, Mr. Kishiyama has been involved with a flood of Yamato kits in quick succession. Of course, he also plays an active role as a developer of Yamato 2199 overall. He shares his passionate thoughts here.

The way toward “Yamato development”

Interviewer: When talking about “Mr. Kishiyama of Bandai,” including the episodes of your childhood and joining the company, you are familiar to magazine readers as a “Gunpla person,” but in fact you’re also a “Yamato person.” [Translator’s note: “Gunpla” is the nickname for “Gundam plastic models.”] Would you say your reason for joining Bandai was “because they’re the company that does Yamato?” 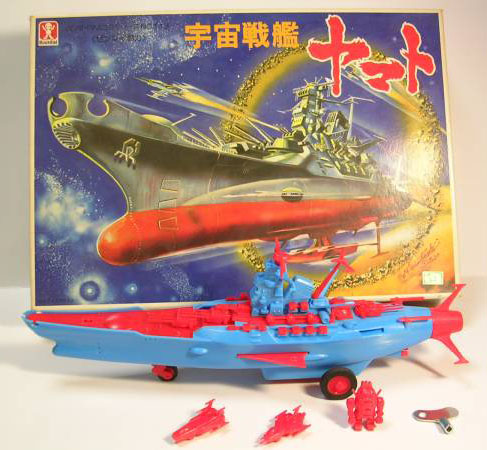 Kishiyama: No, not at all. Of course, I built many Yamato models as a child and I knew the Bandai mark on the packaging, but I also built Thunderbirds kits and didn’t know if they were made by Bandai or Imai. Building Yamato models didn’t make me go so far as to say “I want to join Bandai!” And I thought Yamato was better suited to film than plamo. I was a fourth-grader at the time Farewell to Yamato came out, and I was shocked to see adults moved to tears by anime.

I had an older brother who watched Yamato, and he had already built Yamato models. My grandfather gave me the zenmai [wind-up motor] Yamato, and I arrogantly said “I don’t need this zenmai,” and cut the plastic piece off the ship’s bottom so I could make a third bridge instead. I didn’t have the intellectual appetite to talk about Yamato with friends or build models together. I suppose that’s an area where it was different from Gundam.

Interviewer: You hadn’t yet joined the company in the days of New Voyage or Be Forever, right? 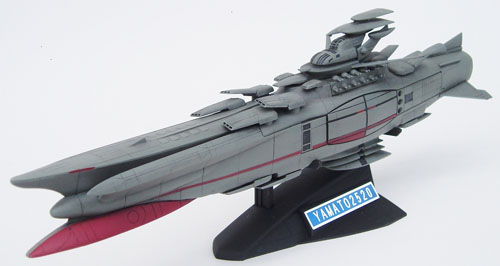 Interviewer: So would you say the first product you dealt with as a “Yamato person” for Bandai was the 1/350 Yamato (in 2007)?

Interviewer: Eh? The Syd Mead Yamato? That would be about the time you had reached the level of a veteran at Bandai, so were you nominated after being known around the office as “Kishiyama who talks about Yamato?”

Kishiyama: No, not at all. The central reason was that my predecessor had moved on at that time, and because I had been in charge of the Nautilus from Nadia and the Secret of Blue Water, I guess it was said that “he would be right for it.”

Kishiyama: While considering a variety of products in those days, I began thinking about a “1/350 Yamato.” Over and over, my presentation had been rejected, so when I look back on it, my simply saying, “We should make it big and detailed” may have been slightly ridiculed at first. But as it was rejected again and again, I kept adding on to it, saying, “Well, how about this, too?” until eventually the details of the 1/350 Yamato became fixed.

Kishiyama: I worked with Shigeru Watanabe, the top producer at Bandai Visual, and Yasushi Kishikawa, who deals with Star Trek kits. That’s when the talk started about “Kishiyama of Bandai” and his passion for Yamato, so I didn’t have to force it. 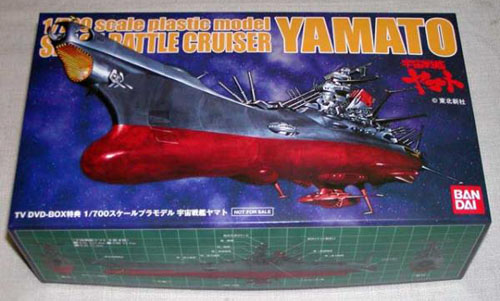 Then news would come to me through the grapevine that “something’s going to happen with Yamato.” I’d say, “Understood! I’ll get some people together,” and I would contact amazing people like Yutaka Izubuchi, Hideaki Anno, Hideaki Ito, and Ryusuke Hikawa and they’d flock to the meeting room at Bandai headquarters. I was able to do the 1/700 and 1/500 Yamatos through such relationships.

Interviewer: This is after the fact, but was there ever talk of releasing the 1/700 Yamato separately? [Translator’s note: it was only released bundled with the remastered Yamato series 1 DVD box in 2008.]

Kishiyama: At the “Yamato experts meeting,” it turned out that Mr. Anno had privately asked Mr. Shoichi Manabe to make him a 1/700 Yamato, and I said, “That’s great! Let’s do that kit! We’ll make a lot of money!” We pushed strongly, and as a result it was decided that Bandai Visual would perform the design and production. [Translator’s note: Bandai Visual is the home video arm of the company.] 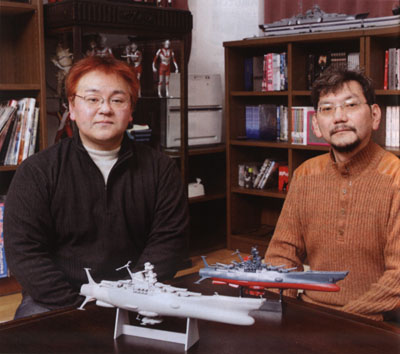 At the time, Mr. Anno supervised it with a fierce commitment, and it seemed the many corrections would push it over budget and past the delivery time. Bandai Visual went to a lot of trouble to make the changes and carried it out, so it made for a good study. Or rather, it was an interesting experience. (Read more about the making of the kit here.)

[Translator’s addendum: it was explained to me by a different representative of Bandai that since the model was engineered by Bandai Visual, it could not be released independently by the hobby division due to internal hierarchies. Such things are regrettably common in corporate culture.]

Interviewer: Isn’t it true that the “Yamato experts” have an ungodly level of devotion? Isn’t it difficult to bring such people together?

Kishiyama: I was acquainted with several of them from previous occasions, though we hadn’t talked about Yamato. Mr. Izubuchi was a director on Mobile Police Patlabor, and we’d met many times. We didn’t talk about Yamato, but I knew that he liked it. Still, gathering them together by saying, “It’s for Yamato!”…it still makes me feel self-conscious to look back on it now. Like, “Please forgive me, I was just a kid!” (Laughs)

Interviewer: Like, “This is a dangerous world I’ve set foot into?”

Kishiyama: No, more like the way I just innocently thought I’d make friends with these guys and have them teach me different things. I soon learned what I should be doing and what I was capable of doing. 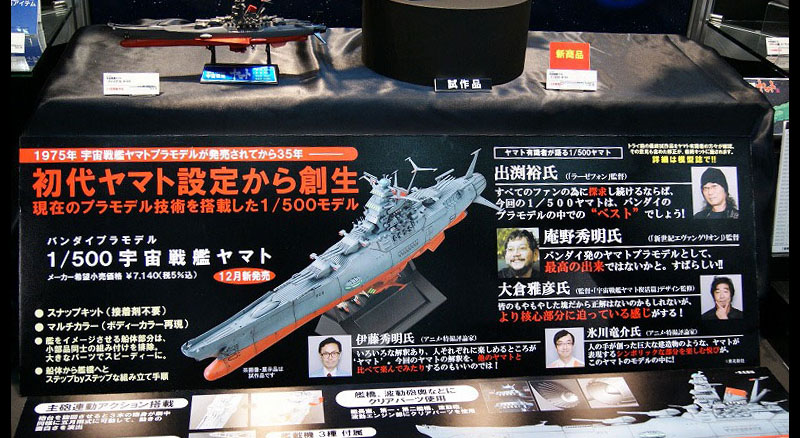 Promo display for the 1/500 kit at the All Japan Hobby Show with endorsements from the “Yamato Experts.” (October, 2010)

“Lineup Expansion” is the first priority

Interviewer: At the time the series started, you had dealt with many important Gunpla models that set the direction for later series, but Yamato 2199 was completely different from them. Products are made in which the power comes out in a good way.

Kishiyama: With Yamato 2199, I thought the first priority should be lineup expansion. I didn’t think there was a need to make an extravagant masterpiece such as Gunpla’s MG [Master Grade] or PG [Perfect Grade] kits. Only a few of those get to market in a year, and even looking back at it a few years later, I think doing a larger number of products in a series lineup is more attractive. 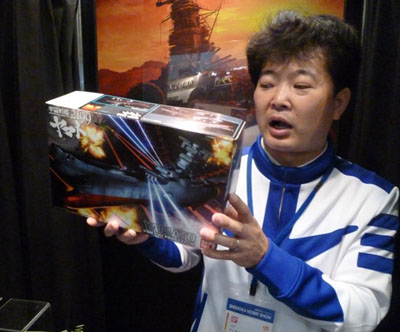 Kishiyama at the Shizuoka Hobby Show, May 2012

To go to extremes, Gunpla has been continuing for 35 years, and any minor Mobile Suit can be brought to market some day. Yamato doesn’t have that sense of security. If there’s a new film, we could get a couple of new products out and then it would be over. Such a possibility would be extremely high. But I didn’t want Yamato to be done that way; I want it to continue for as long as possible. If enough of a lineup was gathered, it would be seen as popular and lead to various other developments. We’re laying the groundwork for that now. Even in a time when there are no new films, good plamodels could continue to be released in detail. I’m hoping it will go that way.

Interviewer: Are the Yamato 2199 plamodels made with the same three-dimensional CG used in the anime itself?

Kishiyama: There is a master model in CG, and since I didn’t know how to create the data needed for manufacturing, it would have been impossible to make anything. Since the details are created according to the demands of a given scene, there are some details in the design drawings that would be impossible to recreate in a model, while other sections are totally smooth with no details at all.

Interviewer: Was the external form done just according to the data?

Kishiyama: Hmm…I have arranged some small additions. With the size of the model, they depended on how it looked to the human eye, making the smokestack bigger, or the cannon barrels a little thicker to give them more presence.

Interviewer: 2199 is blowing a fair wind right now, but the resale of products from the original series is getting a favorable impact from it.

Interviewer: Yamato products have been in constant re-release over the years, but there are still things that have never come up in the lineup.

Kishiyama: Like the tripod tank and patrol boat from Be Forever Yamato.

Interviewer: Yes. They’re not being reissued, even with this fair wind. Is it not expected that those products will sell any more?

Kishiyama: Actually, I’ve checked into the whereabouts of the metal molds. But those products haven’t been reissued in a long time, so we’d have to extensively remake them in order for the box and the instructions to meet current standards. There are foolish things that lead to surface costs, so a reissue would not go smoothly. Of course, the greatest chance is right now while the winds are favorable, so I’d like to carry it out somehow. In the end, it might be just for my own personal edification. 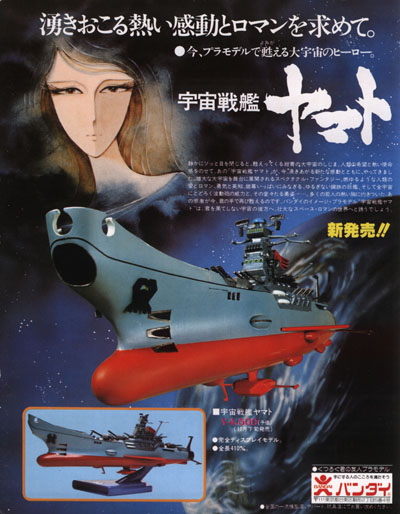 Because of Yamato, there is Bandai

Interviewer: I hear that Bandai’s 2199 series is very popular…

Kishiyama: So it is, thanks. We’ve arrived at a level where we can continuously develop various products. The groundswell from the TV broadcast was big. The performance has gone up significantly from that time.

Interviewer: Could it continue for a while?

Kishiyama: When I joined Bandai and talked to the higher-ups, I said, “Bandai was saved by Yamato.” They missed the super-car boom and sales were in gradual decline, and if the downturn continued it would have ended in bankruptcy. When the Yamato image model was released [vintage ad shown at right], it was said that it would no longer be necessary to close the company. They managed to connect with Farewell to Yamato. Today, younger Bandai employees might say, “are you kidding?” but at the time Bandai Models (the subsidiary of Bandai which did development and production of plamodels merged with the head office in ’83) was helped by Yamato, and there is a certain kind of debt. Therefore, in order to repay that kindness to Yamato, I must do my best.