Almost before we knew it, we were in another countdown to Yamato 2199‘s return to movie theaters. Voyage of Remembrance (hereafter called A Voyage to Remember, since that has been confirmed as the official English title) was released October 11, just before this report was published, which meant that the month of September was all about buildup.

New products weren’t as numerous as one might have expected, but the heavy pace of public events got even heavier, especially when four of them collided in one spectacular weekend. And then there was the unexpected announcement from Hollywood. But we’ll take things one at a time… 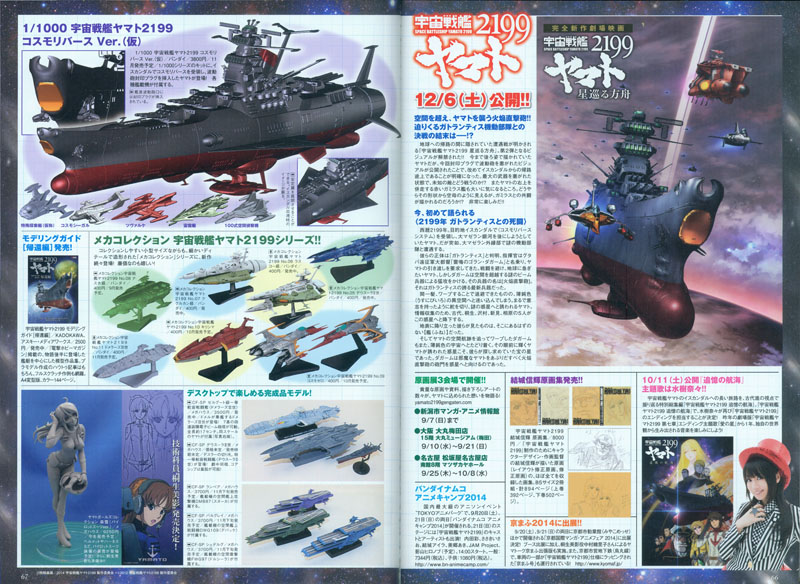 This issue’s 2-page spread was a roundup of August events and announcements. At top right is the new key art and description for Ark of the Stars with music and book news below it. At top left is the CAD image for the 1/1000 “Cosmo Reverse” Yamato model kit and its support vehicles, due out in late December. Below that are the current and upcoming Mecha Collection mini-kits. Megahouse products occupy the bottom left. 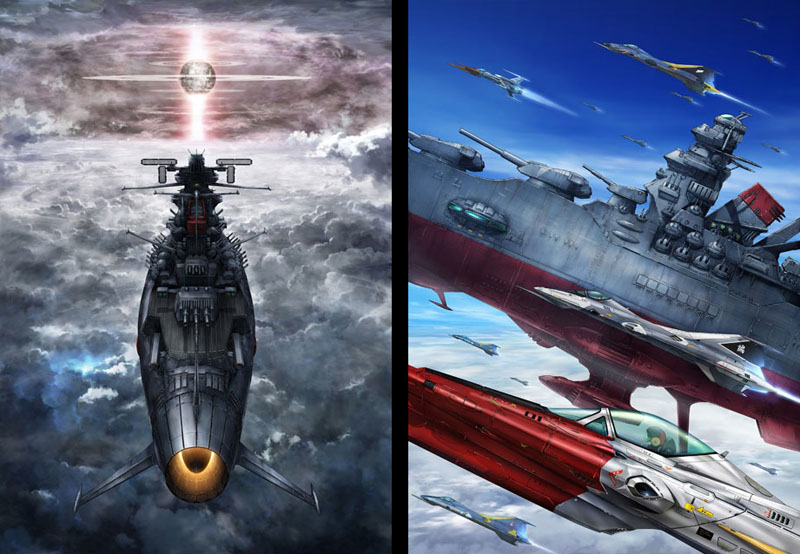 The traveling 2199 Art Exhibition was open in Niigata at this point, and its accompanying merchandise was augmented with these amazing new (and amazingly expensive) art prints.

Chief Mechanical Director Masanori Nishii is credited for the top two images, titled Mysterious Encounter and Flight into Space. The first image is key art for Ark of the Stars, but the second is brand new.

Just above we have Odile and Odette by manga artist Michio Murakawa (the names are from Swan Lake) and Launch by mecha designer Junichiro Tamamori. Autographed copies of each print (limited to 40) were sold at the venue of the exhibition.

Click here to see the original merchandise lineup, which continues to travel with the exhibition. 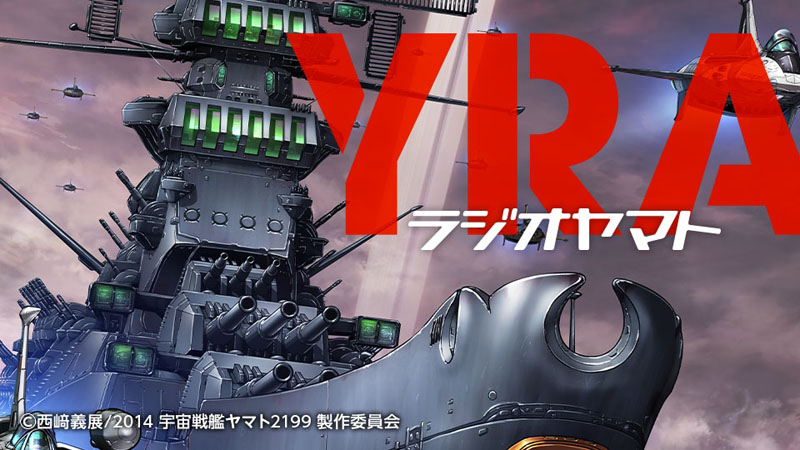 Internet radio station Onsen broadcast this weekly program during the theatrical release of 2199, hosted by the voice actors for Yuria Misaki (Aya Uchida) and Analyzer (Cho). It returned to life as the 2199 movies approached, this time adding new co-host Kiryu Mikage (Eriko Nakamura). Uchida and Nakamura would appear live on stage together later in the month (keep reading). 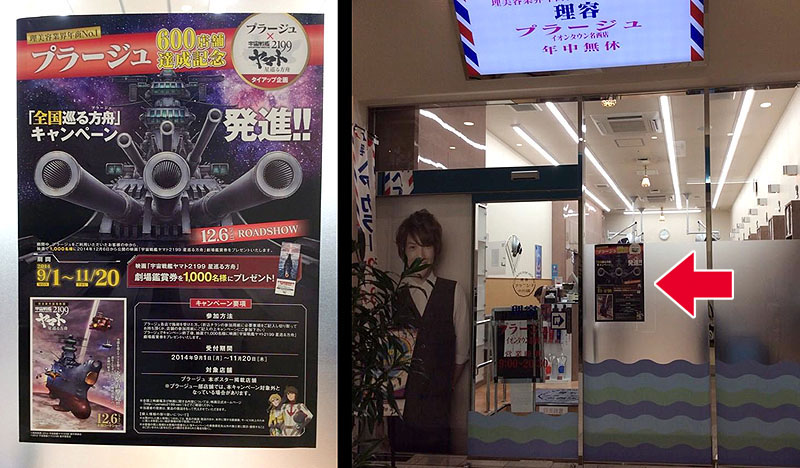 A tie-in campaign with a hair salon? Why not. A chain of Japanese salons named Plage (pronounced with a soft g, not like “plague”) commemorated the opening of its 600th store by starting up an Ark of the Stars ticket lottery. Customers who visited between Sept. 1 and November 20 would be entered to win one of 1,000 tickets to the see the movie in December.

This might have been a ideal opportunity to place the Yamato Girls front and center, but that apparently wasn’t the plan. 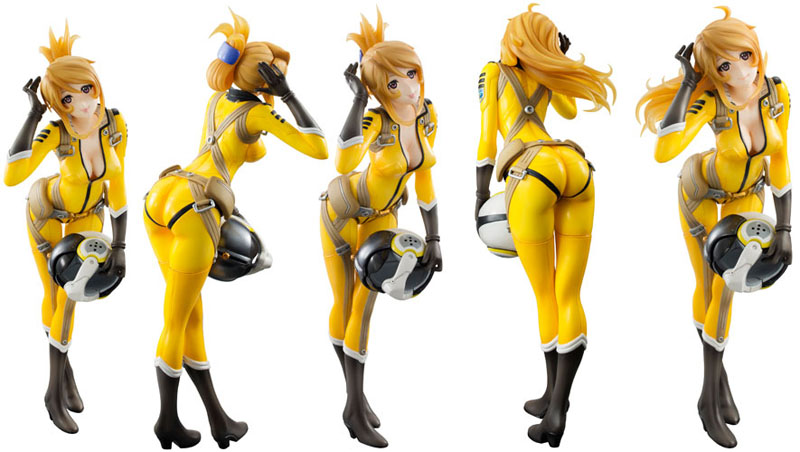 If you thought Megahouse had used up every suggestive pose with their previous Yamato Girls, you learned otherwise when Yamato Crew announced this brand new 1/8 Yuki figure for late December release. Called the “pilot suit version,” she comes with two expressions and hair styles as she suits up for action on the Cosmo Seagull. Zip up, there, Yuki. Enceladus is chilly.

A wave of intrigue rippled through fandom around the world when the long-rumored live-action made-in-USA Space Battleship Yamato movie took another step closer to reality. Writer, director, and self-professed Star Blazers fan Christopher McQuarrie confirmed that the project has been greenlit with the goal of a 2017 premiere. Casting has not yet been announced.

Read about it at Anime News Network here.

It was just as newsworthy in Japan as in the English-speaking world with simultaneous coverage on Yamato Crew, Anime Anime, Cinema Today, Eiga.com and TV Groove. The September 8 edition of Sports Nippon is shown above left. 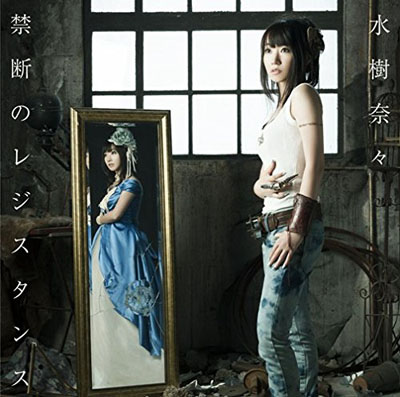 In August, it was announced that pop superstar Nana Mizuki would perform the end title for A Voyage to Remember. She was previously heard singing Star of Love for the end title of Yamato 2199 Chapter 7 (a song that reached number 1 on Japan’s Oricon charts).

The new song, titled Blue, was released as one of three tracks on a CD single titled Forbidden Resistance (shown at right) on October 15. A sample of it could be heard behind a TV commercial for the film that was released later in September (keep reading).

With the return of Yamato 2199 to theaters came the return of Yamato Crew Premium Night, a special event for members of the Premium Fan Club. This one happened the night of Friday October 10, and 11100 yen (about US $110) got you a commemorative ticket, a program book, and the theater-exclusive Blu-ray in a special Yamato tote bag. The event occurred at three participating theaters, one each in Tokyo, Osaka, and Nagoya. The Tokyo theater was the familiar home base Shinjuku Piccadilly, which opened the screening with an on-stage talk by director Takeo Kato and scriptwriter Shigeru Morita.

More news of Premium Night and the October 11 premiere will be the centerpiece of our next report. 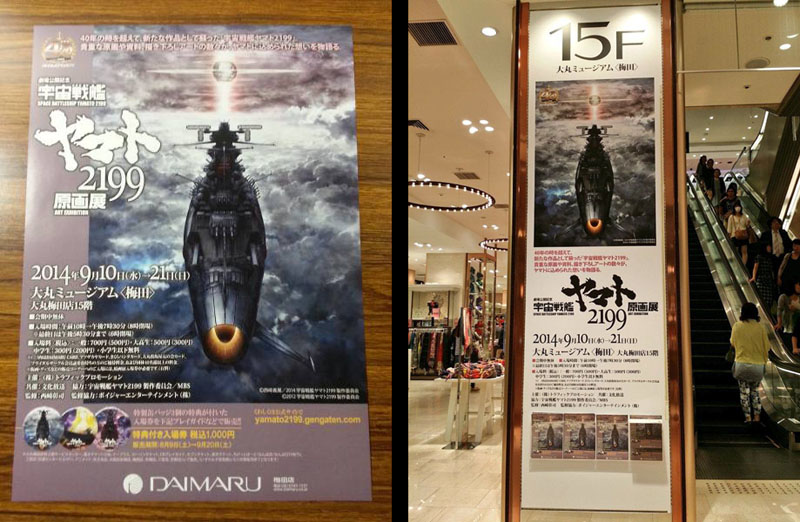 Osaka is widely known as Japan’s second biggest city behind Tokyo, so it was only a matter of time before the Art Exhibition landed there. It opened in an event space within the Daimaru department store in Osaka’s Umeda district for just under two weeks. This time, an audio tour could be rented, narrated by Kodai’s voice actor Daisuke Ono.

The collection was freshened up with artwork from Ark of the Stars and other new pieces that appeared along with the exquisite 1/100 Yamato model and other display items. See a photo gallery by friend-of-the-website Shiba Hiroharu here.

The final weekend of the exhibition featured two special events: an autograph session with artist Kia Asamiya September 20 and a Yamatalk event with Eriko Nakamura (voice actress for Mikage Kiryu) on September 21.

For those of us who couldn’t attend, there was at least another infusion of fresh merchandise, and this time it was extra special. For the past several months, a 2199 TV rerun has been showing in the Kanto region on Tokyo MX with new artwork accompanying the end credits. We’ve gotten a few fleeting glimpses of the images in previous reports, all gorgeous paintings by anime/manga artist Kia Asamiya. The Tokyo MX rerun concluded on September 30, but the paintings live on.

The Osaka exhibition finally gave us a nice big look at 18 of them with dual sets of postcards and clear files sold only at this one location. It doesn’t encompass Asamiya’s entire body of work for the series, but it’s the biggest single chunk released so far.

Susumu Kodai is the narrator of A Voyage to Remember. This was officially announced when voice actor Daisuke Ono (third from the left, with the sound crew) completed his recording session for the film. Several online sources reported his message to the fans:

For the compilation version, I recorded narration as Susumu Kodai looking back anew at the voyage of Yamato. In fact, I think it can be enjoyed with a new feeling after seeing the TV series with a lot of new shots. I hope those who haven’t seen Yamato yet will be eager to join the crew with this compilation version. The new movie A Voyage to Remember opens across the country on October 11. Let’s launch from the theater into space!

See a gallery of 25 new shots at Akiba Souken here. 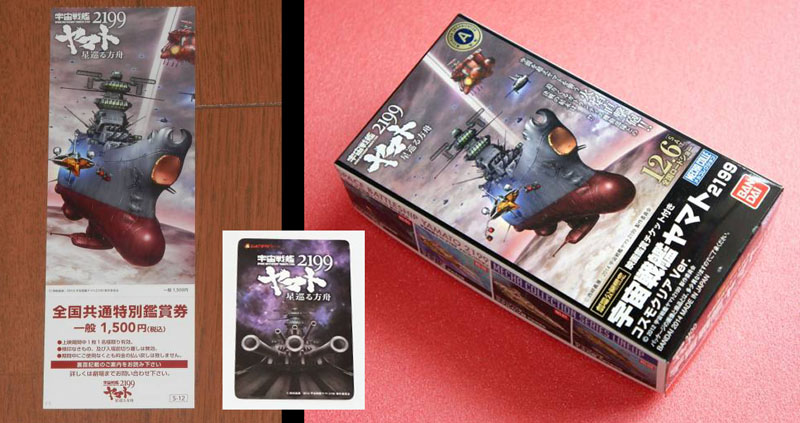 Yamato Crew dialed up the incentive to buy advance tickets for Ark of the Stars by offering a special-edition model kit as a bonus item. Previously available at Chara Hobby 2014 Summer (August 23-24), now it could be ordered from the Yamato Crew website for 2100 yen (a little over US $20).

Sold in a commemorative box, the model is a reissue of the first Yamato 2199 Mecha Collection kit cast in translucent “Cosmo Clear” plastic. A “movie picture” card with a list of participating theaters was also included (top picture, inset).

September 15: The Art of Nobuteru Yuuki

This monstrous collection of animation layouts by character designer Nobuteru Yuuki was covered in the last report when a pre-release edition appeared at Comiket. This month, it went on sale from two online sources simultaneously, Yamato Crew and Anime Style. 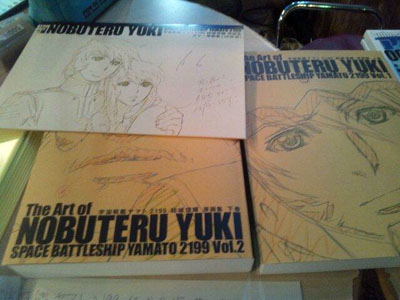 Published by Mag Garden (the print media arm of Production IG), the books came with a different bonus feature depending on where you bought your copy. The Yamato Crew edition included a set of four prints on animation paper in a simulated production folder. The Anime Style edition (shown at left) included a separate booklet with layouts from Episode 26.

You may recall that the downside of this book was that it would only be sold via these sources to customers with Japanese addresses. However, Mag Garden appears to have reversed that decision – and a copy without the bonus features can now be ordered from the mighty Amazon.co.jp for about US $80. Remember, the two volumes together are about 2.5″ thick and weigh in at over 4 pounds, so this is absolutely worth it. Get your copy here. 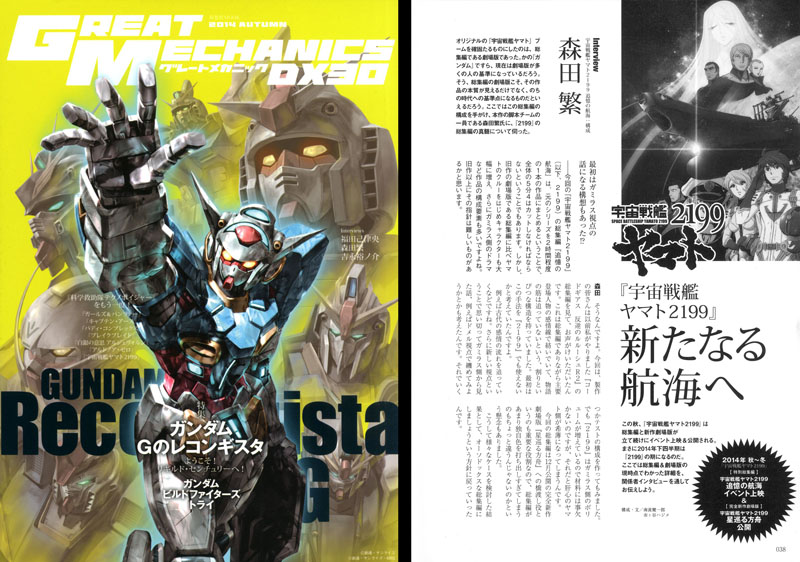 It’s been a little while since we’ve seen new Yamato 2199 coverage from Great Mechanics DX, but they were evidently just biding their time until the production staff lifted their veil of silence. That silence ended with this issue’s 6-page dual interview with writer Shigeru Morita and producer Mikio Gunji about the two new movies.

That knowledge should be all the motivation you need to read the interviews here.