The Neverending Appeal of Space

With the achievements of the asteroid probe Hayabusa and a variety of opportunities in space business, people’s interest in space has risen in recent years. Yutaka Izubuchi, who worked as the general director on the new movie Yamato 2199 Ark of the Stars, shares his thoughts about space. 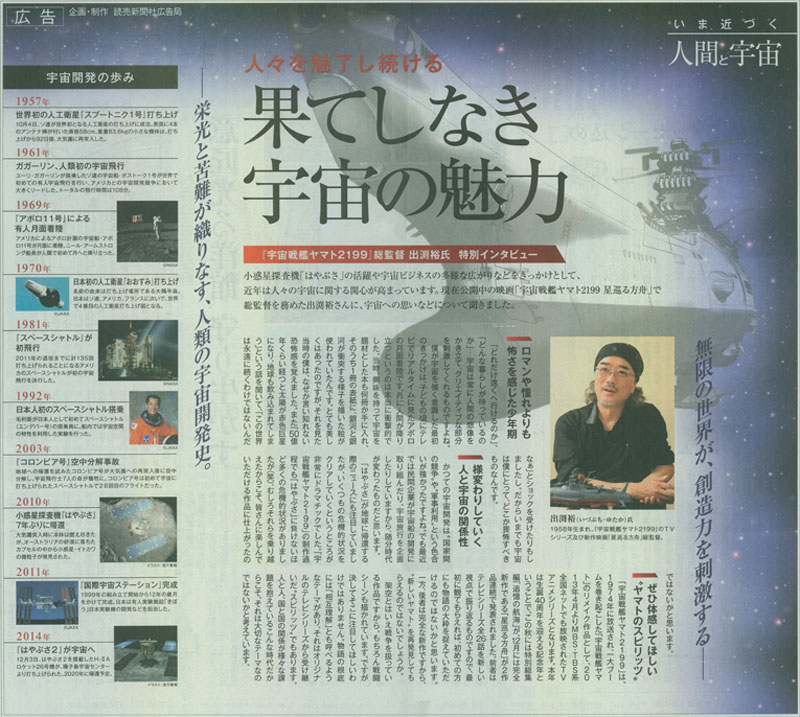 The infinite world that stimulates creativity

As a boy, I felt more fear than romance and admiration

“Just how far can we go?” “What kind of life is waiting there?” Space has always aroused the human imagination and stimulated our creativity.

The first time I was strongly conscious of space was when I watched the Apollo moon landing on TV in real time, in my childhood. It was shocking when a human being touched down on the moon. At that time, I was intrigued by the subject of space and got some books. On the cover of one book was a picture of two colliding galaxies. I saw that it was very beautiful, but at the same time I had a feeling of fear for some reason. I also heard that, “In about five billion years, the sun will become a red giant star and swallow up even the Earth.” It was a shock for me to realize, “The world won’t last forever.” Therefore, space is still something that holds fear for me, even now.

The changing relationship of humans and space

Space development used to have a strong tint of “competition between nations” and “military use.” But in recent years, private enterprise has worked on developing a space ship, and now that space travel is being planned, I think something has changed considerably.

I paid attention to the news when Hayabusa returned to Earth, and the overcoming of many crisis situations was very dramatic. There were also many crises in the production process of Yamato 2199 that were no less than those faced by Hayabusa. (Laughs) But because they were overcome, I think it lead to a finished work that everyone can enjoy.

The “Yamato Spirit” that I want you to experience

Yamato 2199 is a remake of Space Battleship Yamato, which was broadcast in 1974 and ignited a big boom. It became a TV anime series that aired nationwide on the MBS and TBS system in April 2013. This year marks the 40th anniversary, and two new works were consecutively released: the special compilation A Voyage to Remember in the fall, and the completely new feature film Ark of the Stars in December. Because the former looks back on the 26-episode TV series, I would ask you to see that first. I think a new viewer can catch the outline of the story from it. On the other hand, since the latter is a completely new work, you could discover a “new Yamato” in it.

Because it’s a work of fiction, it deals with war, and of course battle scenes are depicted. But I don’t want you to be preoccupied with that. The theme that underlies the story is one of “mutual understanding.” That is the “spirit” it inherited from the original TV series. Because we live in a time when the relationship of person to person and country to country has a variety of challenges, I think this theme is an important one.

Continue to the next interview: Great Mechanics DX #31