Information just before the spring movies

To be released nationwide on March 19 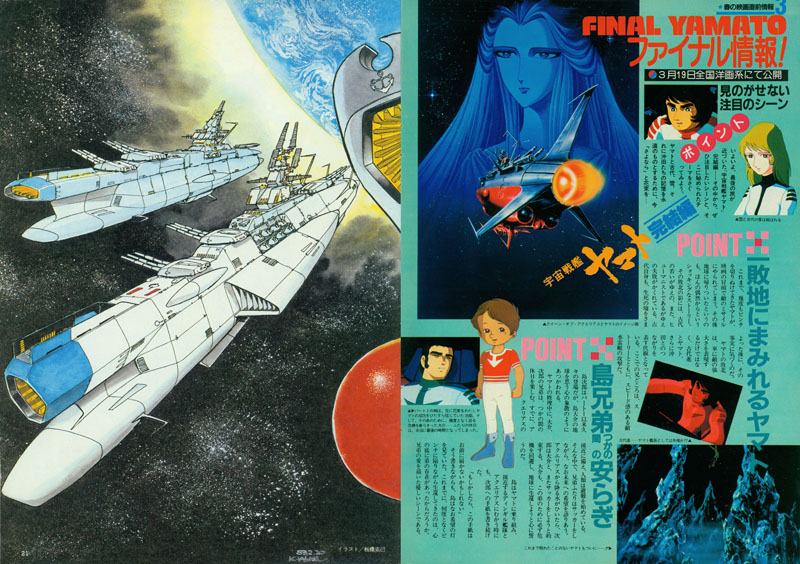 The illustration on the left is part of a larger piece by Kazunori Itabashi. A published source for the full image has not been found.

Upcoming scenes not to be missed

The Final Chapter of Space Battleship Yamato is approaching at last — we’ll get an inside look at scenes you’ll want to pay attention to, and explore the hidden themes. To help immortalize the memory of Yamato, Kodai, Yuki, Okita, and the others, here is a “good bye” and a bouquet…

Yamato is marked by a single defeat

Yamato, which came through many a pinch before, falls prey to enemy missiles at the beginning of the movie. Even the story of returning to Earth just by slim chance is shocking. In the shadow of that defeat is hidden a failure, caused by Kodai’s youth as well as his humanism. After skirting the border of life and death, Kodai himself notices the fact.

The defeat of Yamato not only expresses the might of the enemy, it is foreshadowing that represents Kodai’s connection with Yamato and also to Okita. The highlight here, along with the story, is the feeling of speed in the enemy torpedo boat attack.

A moment of peace with the Shima brothers

Jiro Shima has had a long absence since Part 1, and he is treated like a symbol of the heart when Daisuke Shima thinks of Earth.

During the repair of Yamato, Daisuke and Jiro enjoy a short-lived holiday. Aquarius already approaches, and mankind has begun to evacuate. Meanwhile, the two brothers play soccer and talk about their hopes. Daisuke promises to play soccer with Jiro once the falling waters of Aquarius have receded. Daisuke will surely avoid a crisis for the sake of his brother, swearing to come back to Earth alive.

Shima gets on board Yamato, and with the Dengil fleet and Aquarius closing in, he continues writing a letter to Jiro.

“This letter may never reach you…”

While writing it, Shima sees a light of hope. So far, he has survived falling into many pinches time and time again. Is this because his brother was always there, at the bottom of his heart? It is a gentle scene that depicts brotherly love.

caption: Jiro handed a bouquet to his brother in Part 1, and earnestly believed in Yamato‘s success. Daisuke has survived crises over and over for the sake of his brother – the holiday for these two becomes their last. 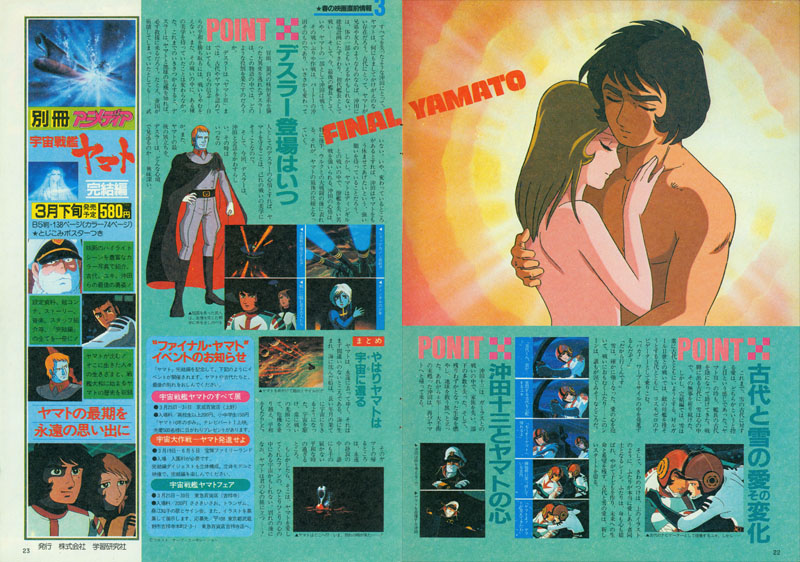 The transformation of Kodai and Yuki’s love

So far, the love of Kodai and Yuki has had a low-key feel. In Yamato III, it helped Kodai from the shadows to become the captain. When Kodai goes into battle, Yuki is in his heart, always praying for his safety.

However, in The Final Chapter, Yuki always always tries to stay with Kodai. In Susumu Kodai’s battle against the enemy carrier of Lugal II, she gets into the Cosmo Zero as navigator.

Yuki has certainly become strong. When the two lovers go together into a fight, it seems like a place where everyone will be moved to tears.

And like the illustration above shows, there will be a scene for these two who are really in love. They are joined in body and soul, soon to make a child, leaving us with life and hope for the future. The love of Kodai and Yuki makes a new start.

The heart of Juuzo Okita and Yamato

Juuzo Okita lost his family and many of his subordinates in the war with Gamilas. With what little was left of life burning away, he took a journey to save the Earth. Four years later, Okita is revived by major surgery and returns to Yamato again.

To Okita, who has lost everything, Yamato is more irreplaceable than ever. If Yamato is like a brother or a friend to Kodai, then to Okita it could be called a part of the body. He was engaged in the building plan and fought as the first captain, and now as the last captain…no, Okita fights as part of Yamato.

In Part 1, Okita’s way of fighting was about strategy, and that hasn’t changed. If there is a change this time, it is would be Okita’s desire to take a strong step toward laying Yamato to rest.

However, Yamato loses its escort in the battle against Dengil, and is forced into a hard fight. Okita’s feelings particularly manifest themselves in the latter half, after the big battle with Uruk. It becomes the last foreshadowing of Yamato.

When will Dessler appear

After Dessler escapes from the great catastrophe that strikes the central galactic star systems in the beginning, what role does he play in the story?

Even though Dessler accepted Kodai and Yamato in Yamato III, his fight to win peace and find faith in himself is unavoidable, and his sensibilities are unchanged by the fight. Judging from the past, if Dessler knows Yamato and Earth are in a crisis, he will certainly come to the rescue. Even if his empire has collapsed. Assuming Dessler’s feelings as a warrior, it would be consistent with his code to protect Yamato.

Also, it is likely that Dessler will have a conversation with Okita this time. What will happen then? In this last journey of Yamato, it will be interesting to know Dessler’s feelings.

In the end, Yamato returns to space

Yamato goes away forever. There can be no mistake about this. It was born in the sea, sank in the sea, and came to live in space at the end of its long years. Running through space, it always led the fight, overcome a crisis, and brought peace.

The place to which Yamato returns is eternal silence – passing out of reach into a place of peace.

Maybe it is that place in the heart of every fan who loves Yamato. After the farewell, Yamato still remains in the journey of your heart! 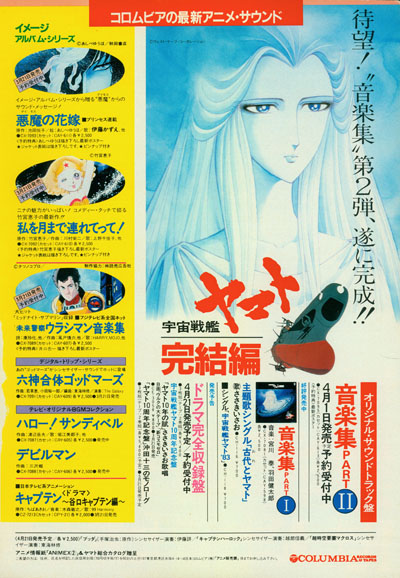 Ad for albums and singles from Columbia. Their second
Final Yamato Music Collection and drama album would be
released in April. Also mentioned was a “10-Year Tribute”
album narrated by Captain Okita, which would be cancelled.

To commemorate The Final Chapter, the following events will be held. Please give Yamato and Kodai a final farewell.

All of Space Battleship Yamato Exhibition