Although the publishing date on the magazine itself is February 25 1983, this information is belied by the content, which includes the Grand Festival concert held March 15. It is unknown when fan club members actually received this issue, but the safest bet is the latter half of March. 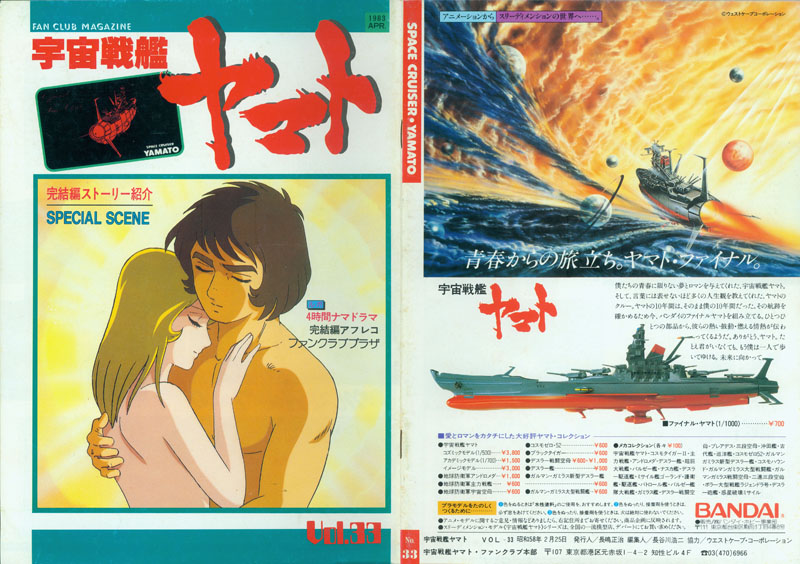 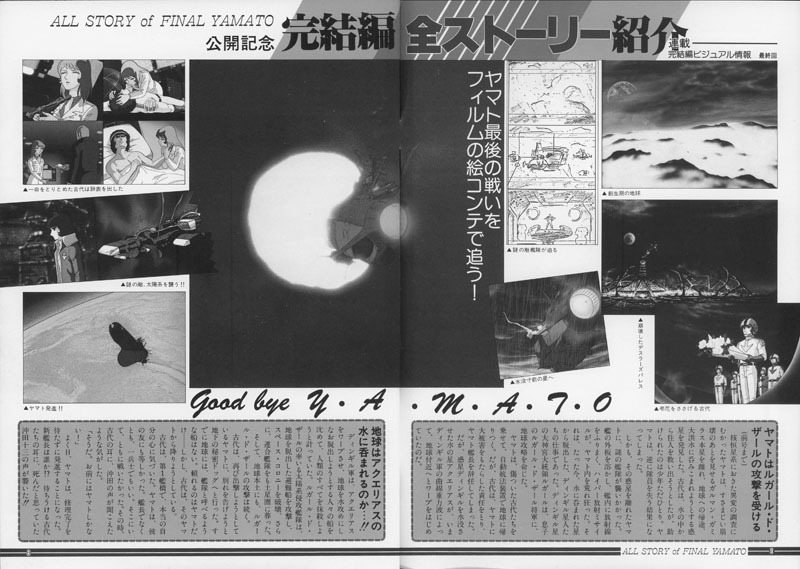 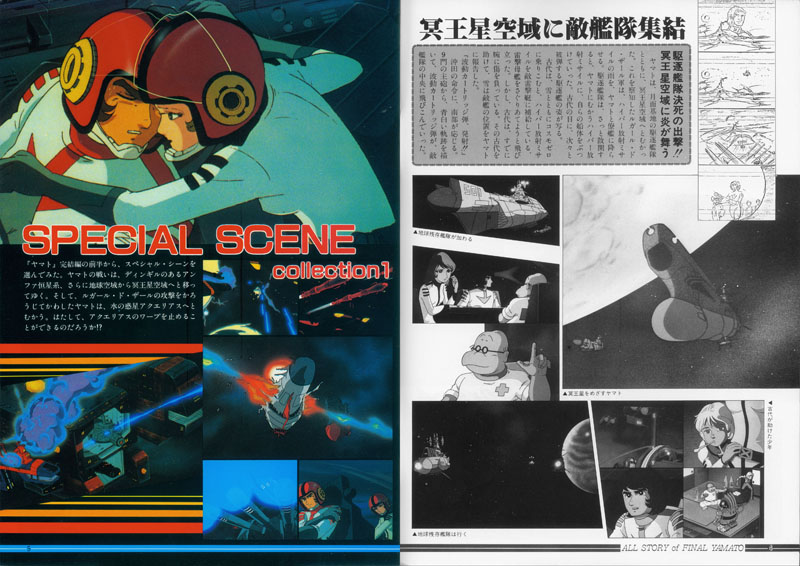 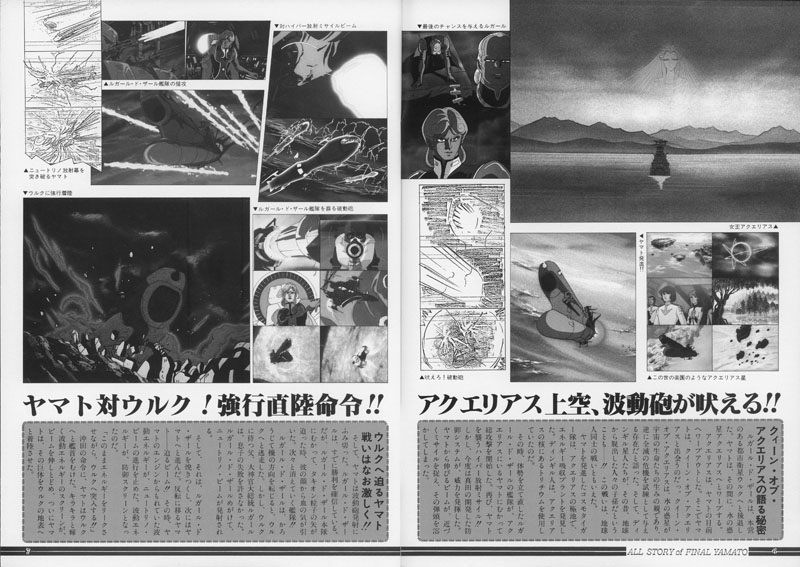 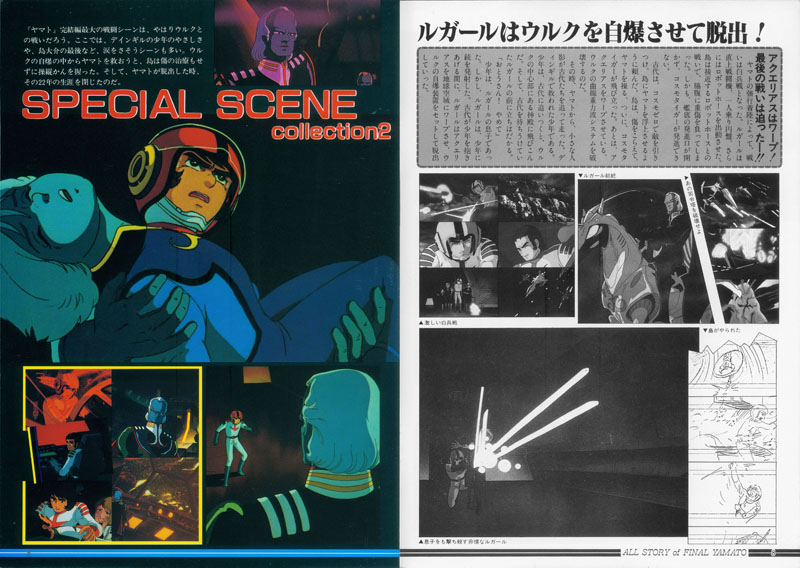 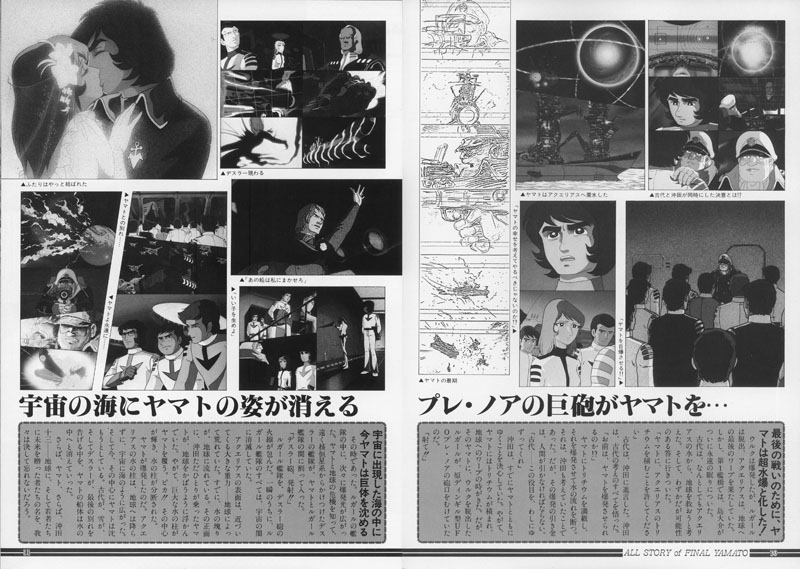 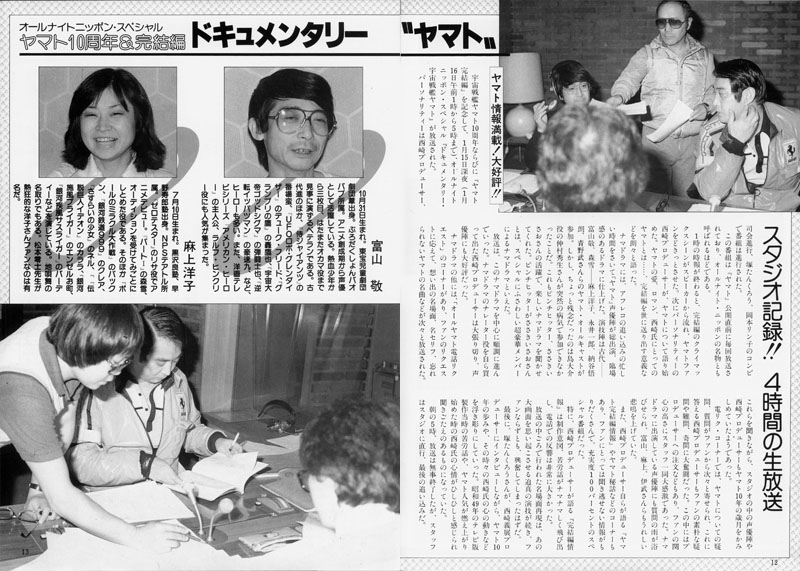 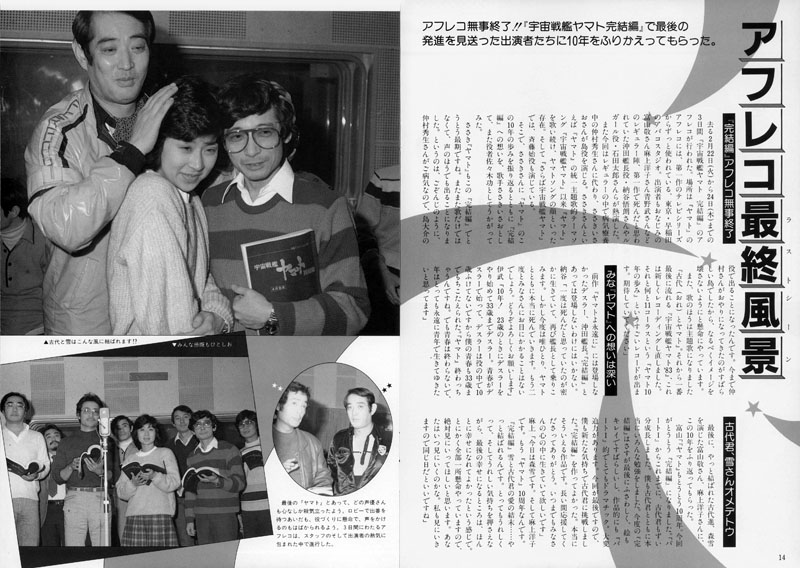 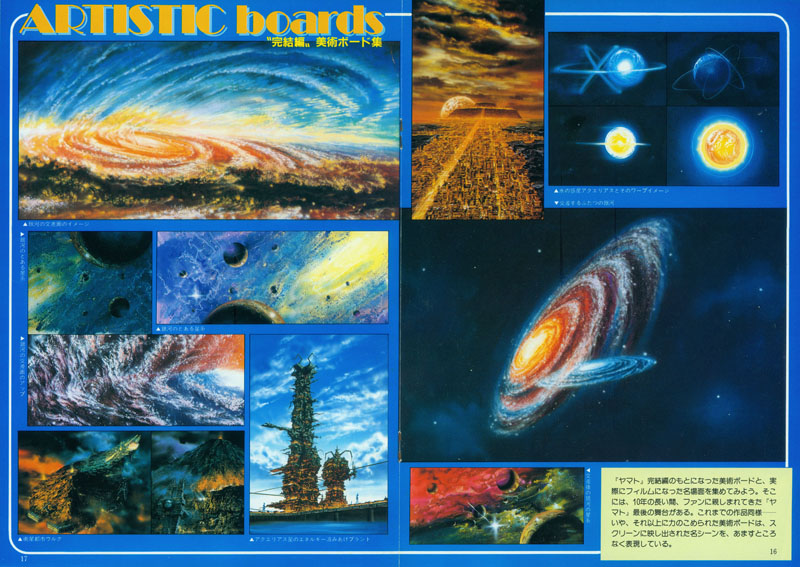 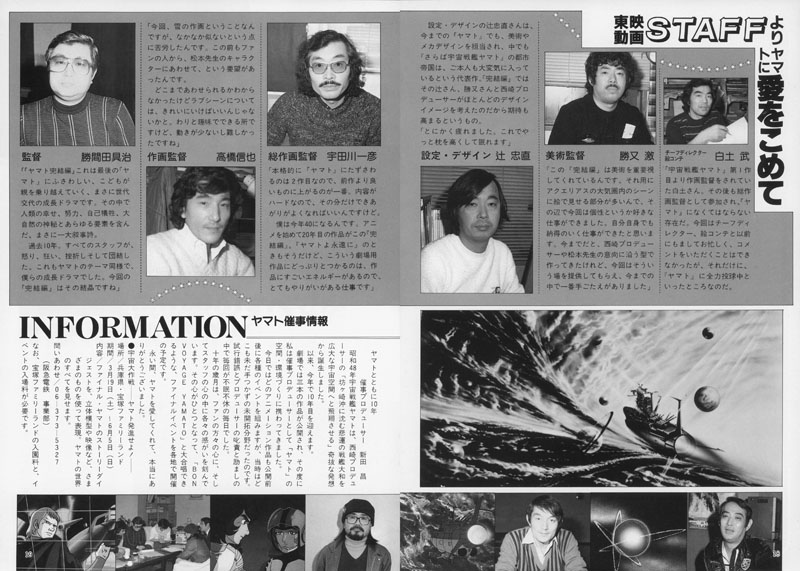 From Yamato with love 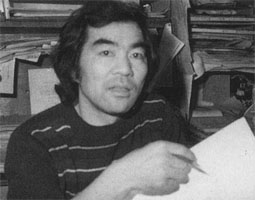 Mr. Shirato has directed for Yamato since the first series. He became indispensable to Yamato afterward, now participating as chief director. Since he is busy with storyboards at this time, he was not able to comment, but it can be said that he’s pitching for Yamato with all his strength. 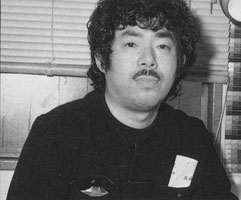 “To me, the art for The Final Chapter is critical. There are many scenes that show places within the atmosphere of Aquarius, and I can say that my personal favorite work is in that area. It was convincing even to me. Up to now, everything has been made along with the intentions of Producer Nishizaki and Mr. Matsumoto. When such a location was offered to me this time, it became the most challenging for me.” 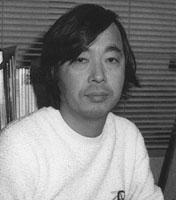 Tsuji Tadanao has done design work for Yamato before, and he was in charge of the art and mecha design for the city empire in Farewell to Yamato, which he considers to be his masterpiece. For The Final Chapter, Producer Nishizaki and Art Director Katsumata had even higher expectations for his design images.

“Anyway, I’m tired. I’ll pile up my pillows and finally get some sleep.” 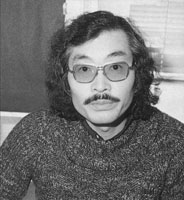 “This is the second time I’ve been seriously involved with Yamato, and the most important thing is to make it better than the previous work. The content is difficult, but it should be good when it’s done. I’ll be 40 this year. The Final Chapter marks the 20th year of my career. When I worked on the theatrical release of Be Forever Yamato, I was immersed in it at the time, and because there’s such great energy in the work, it’s very rewarding.” 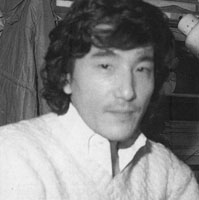 “I’m animating Yuki this time, and I’m having trouble with points that aren’t readily similar. A lot of longtime fans demand that she match the character of Mr. Matsumoto. I don’t know where the love scene is being put together, but it should be beautiful. I was able to make it relatively to my tastes, but there wasn’t much movement and it was difficult. 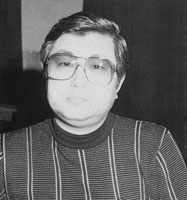 “The Final Chapter is suitable as the last Yamato, a story of the child surpassing the parent and of generational change. An effort for the happiness of humankind, self-sacrifice, the mystery of nature; all these elements are included. It’s a huge epic.”

“Ten years have passed. The staff and I got angry, enthusiastic, and frustrated, we failed and we united. Just like the theme of Yamato, it was our growth story, too. It all crystallizes in The Final Chapter.”

Text on lower left side of page spread:

Yamato and these ten years

In 1973, Space Battleship Yamato was born from Producer Nishizaki’s novel idea of “letting the doomed Battleship Yamato that sank off the coast of Bogasaki to fly off into the vastness of space.” This year, we celebrate that idea’s tenth anniversary.

Three works have been shown in theaters, and I was engaged in developing the environment around them each time as the producer of special Yamato events.

Today, all animation works have various public events before and after their premiere. At that time, this was still wild, unexplored territory. Each time, there were round-the-clock days, trial and error, and both encouragement and reprimands from the producer.

Thank you very much for loving Yamato for such a long time. 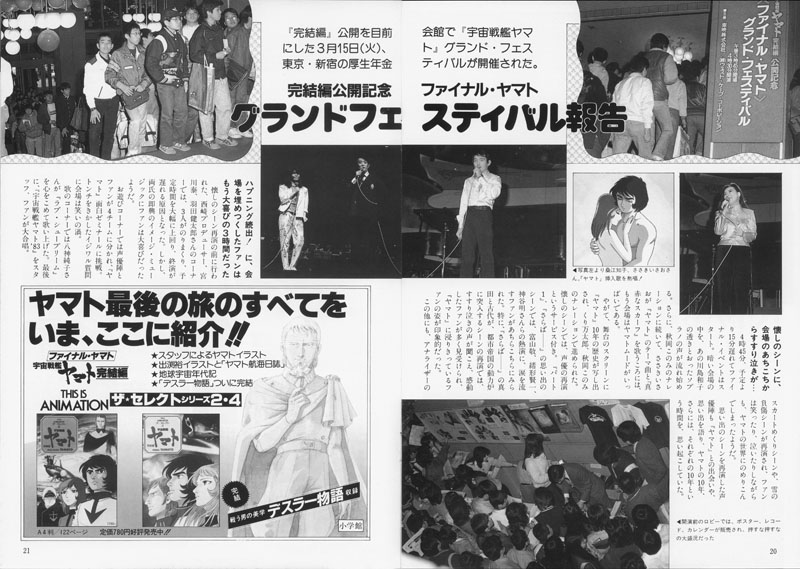 On Tuesday, March 15 with the premiere of The Final Chapter close at hand, the Space Battleship Yamato Grand Festival was held at Kosei Nenkin Hall in Shinjuku, Tokyo. 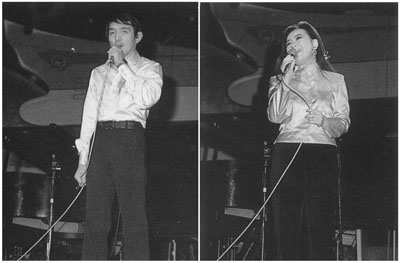 Nostalgic scenes, and sobs from every corner of the venue…

The final event started at 4:45pm, 15 minutes behind schedule. Out of the darkness, the clear soprano voice of Kazuko Kawashima began to flow. With narration by Konomi Akioka and both the Yamato theme and The Scarlet Scarf sung by Isao Sasaki, a Yamato mood filled the venue.

Before long, the 10-year history of Yamato was projected onto the large stage screen, pushed forward with Akioka’s narration. Nostalgic scenes were reprised with the services of voice actors. Through enthusiastic performances by Kei Tomiyama, Kenichi Ogata, and Akira Kamiya, unforgettable scenes from Part 1 and Farewell brought tears to the eyes of many fans. In particular, many fans were moved and sobs could be heard during the repeat performance of Sanada and Kodai, from the scene at the imperial city power reactor in Farewell to Yamato. The sight of so many fans fully immersed in Yamato was impressive.

Also, the scenes of Analyzer lifting Yuki’s skirt and of the injured Yuki were presented again. Fans were seemingly absorbed in the world of Yamato while both laughing and crying.

The voice actors who reprised the memorial scenes were interviewed about their Yamato memories. Each one talked about the last ten years. 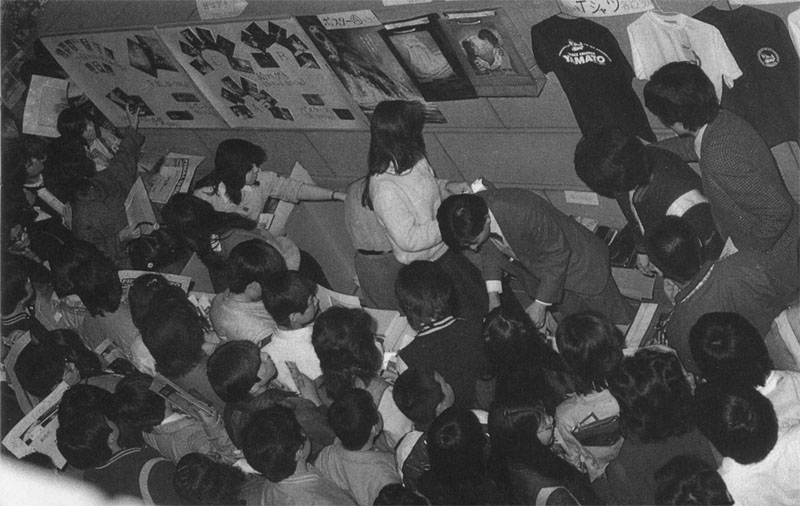 Posters, records, and calendars are sold in the lobby before the curtain rises. It was jam-packed, and a great success. 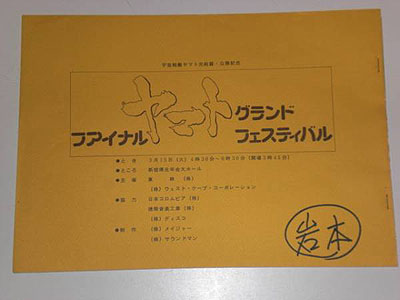 One event after another! Three hours of delight for fans filling the venue

Producer Nishizaki took the stage before the scenes were reprised, and kept appearing in a three-man corner with Hiroshi Miyagawa and Kentaro Haneda. They went past the planned time and caused the curtain to fall behind schedule, but fans were delighted by the improvisational music image they presented.

Actors and fans divided up into four teams in one event, an interesting Yamato challenge seminar. Tough questions turned the meeting hall into a whirlpool of laughter.

Finally, Junko Yagami wholeheartedly sang the song Love Supreme and both the staff and fans joined together in a chorus for Space Battleship Yamato ’83. 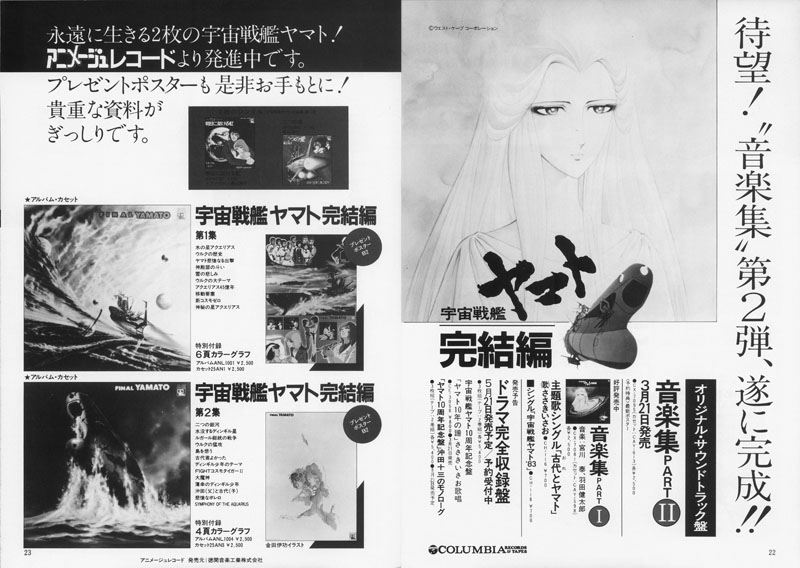