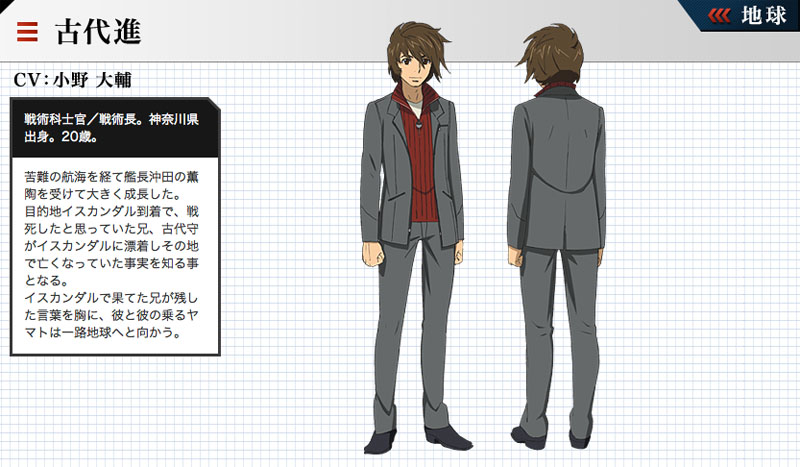 Combat group officer/leader. From Kanagawa. 20 years old. Matured greatly from the discipline of Captain Okita during a difficult voyage. His older brother Mamoru Kodai was thought to have been killed, but arrived at Iscandar. It was learned that Mamoru drifted ashore but died there. Kodai rides Yamato home toward Earth with the words of his brother in his heart. 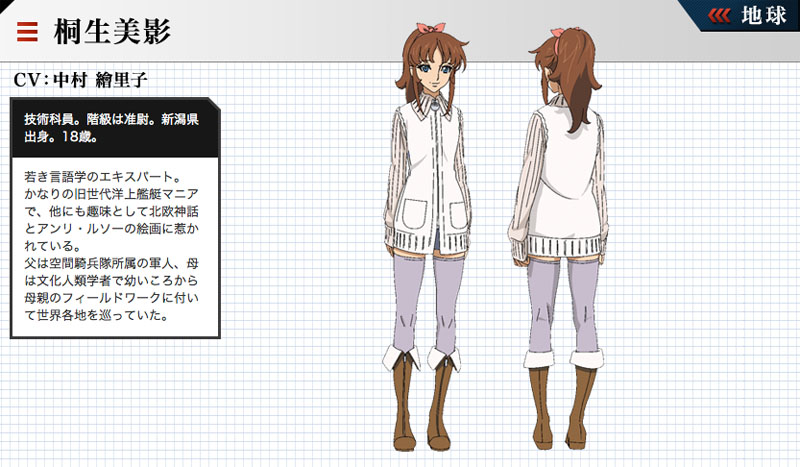 Technical division. Her rank is warrant officer. From Niigata. 18 years old. A young linguistics expert. Other than her mania for antique marine vessels, she is attracted to Norse mythology and the paintings of Henri Rousseau. Her father was a member of the space cavalry and her mother became a cultural anthropologist a young age, her field work taking her all over the world. 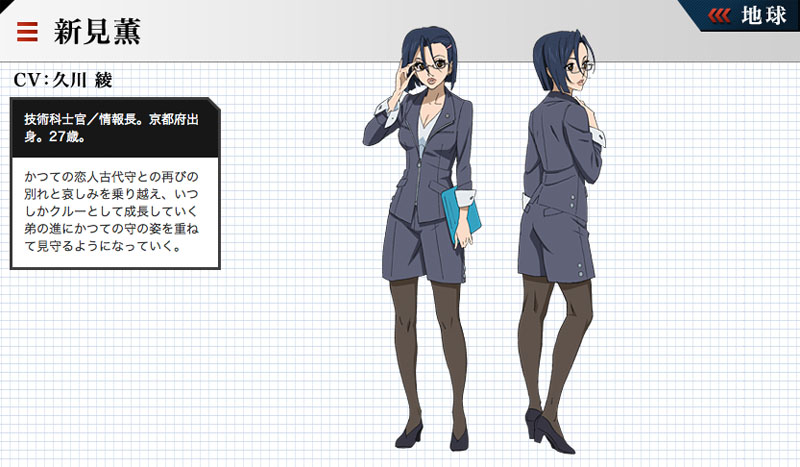 Technical division/information chief. From Kyoto. 27 years old. She is grieving with sorrow over the loss of her former sweetheart, Mamoru Kodai. As his younger brother Kodai matures, she projects Mamoru’s image over him. 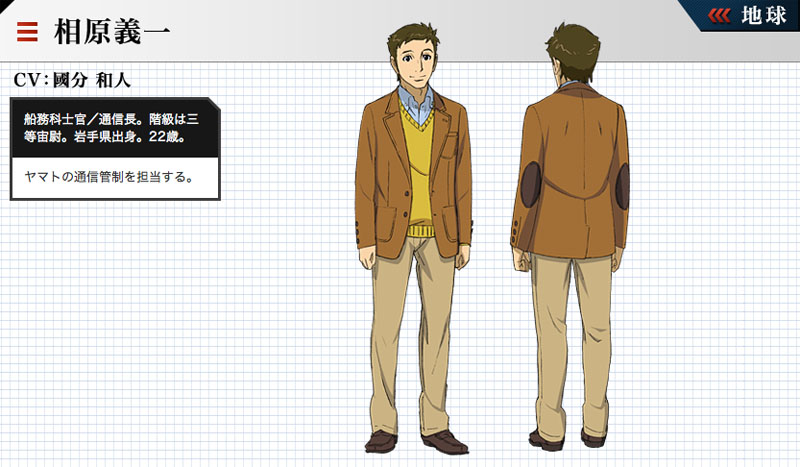 Operations section officer/communication chief. His rank is Ensign, or 3rd-grade Space Lieutenant. From Iwate. 22 years old. In charge of communication control on Yamato. 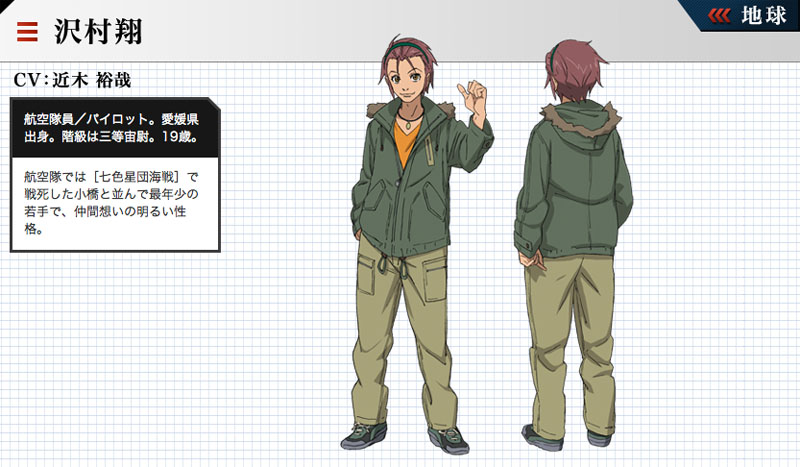 Flight corps/pilot. From Ehime. His rank is Ensign, or 3rd-grade Space Lieutenant. The youngest member of the air corps along with Kobashi, who was killed in the Battle of the Rainbow Star Cluster. Bright and cheerful. 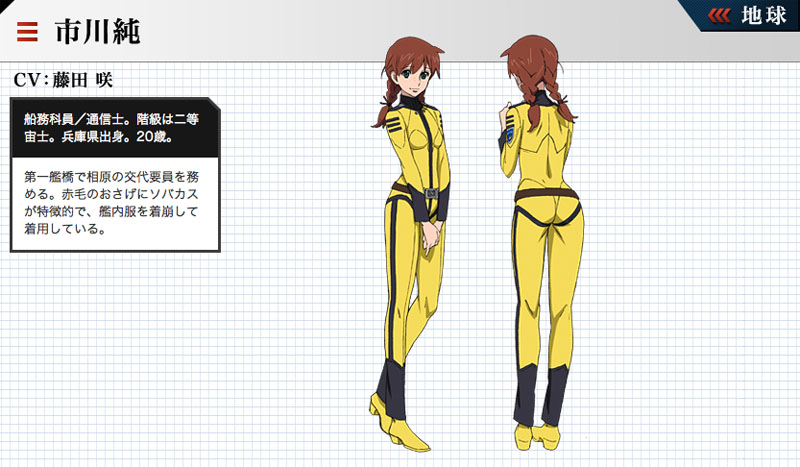 Operation section officer/radio operator. Her rank is Specialist, 2nd class. From Hyogo. 20 years old. Acts as Aihara’s backup on the first bridge. Her freckles are characteristic of one with red hair, and she wears a looser ship’s uniform. 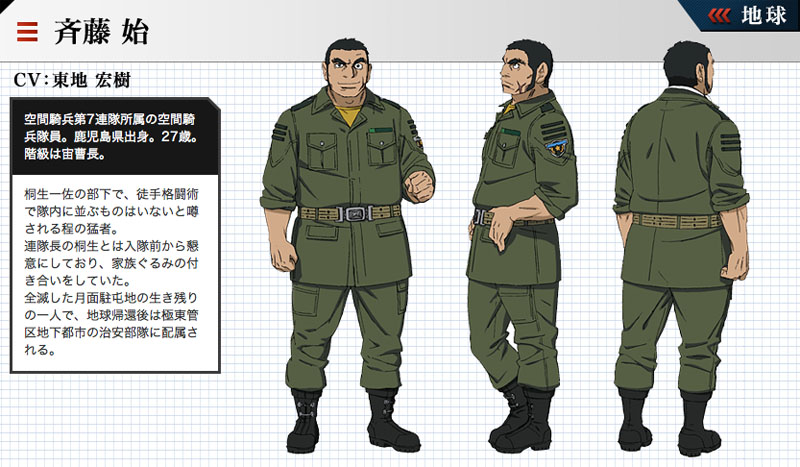 Member of the Space Cavalry Division, 7th Regiment. From Kagoshima Prefecture. 27 years old. His rank is Sergeant Major. A subordinate of Colonel Ichisa Kiryu, a courageous man rumored to be adept at hand-to-hand combat. A friend to Mikage Kiryu before enlisting, and acquainted with her family. He survived the annihilation of his garrison on the lunar surface, and when he returned to Earth he was assigned to the security forces in the Far East District underground city. 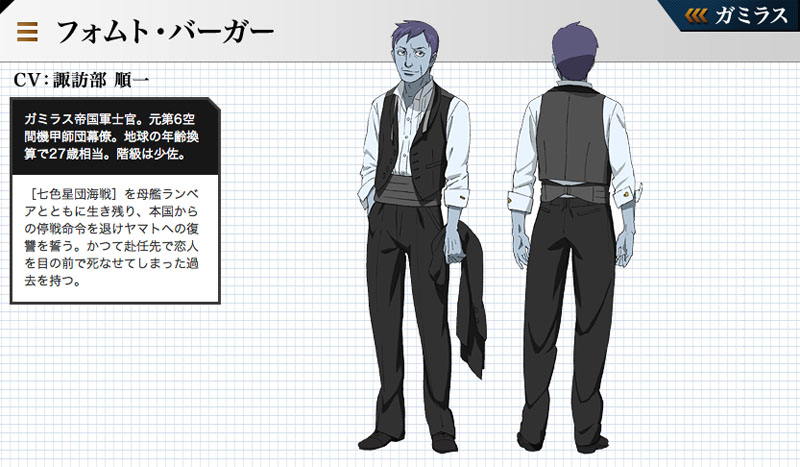 Garmillas Imperial Army officer. Former staff officer, 6th Armored Space Division. Equivalent of 27 Earth years old. His rank is Lieutenant Commander. He survived the Battle of the Rainbow Star Cluster with his carrier Lambea, refused a cease-fire order from his nation, and vowed revenge on Yamato. In his past, his former lover died before his eyes when he left for a new post. 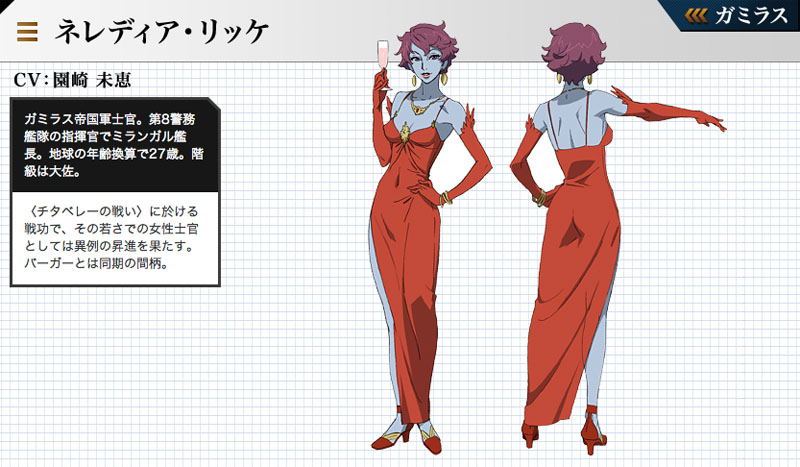 Garmillas Imperial Army officer. Captain of the Mirangal, commander in the Security Division, 8th Fleet. Equivalent of 28 Earth years old. Her rank is Colonel. She received exceptional promotion for a woman in recognition of her distinguished service in the “Battle of Chitabere.” She had a relationship with Berger at the time. 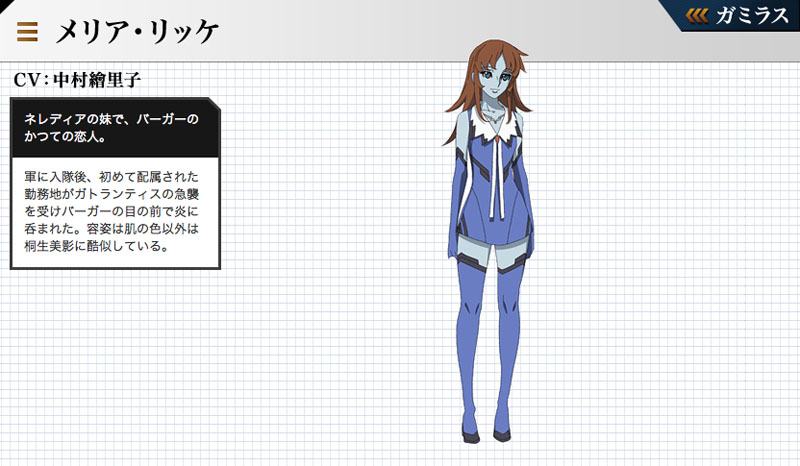 Sister of Neredia, former lover of Berger. After she enlisted in the army, her first assigned workplace was raided by Gatlantis, and she was swallowed in flames in front of Berger. Other than the color of her skin, she closely resembles Mikage Kiryu. 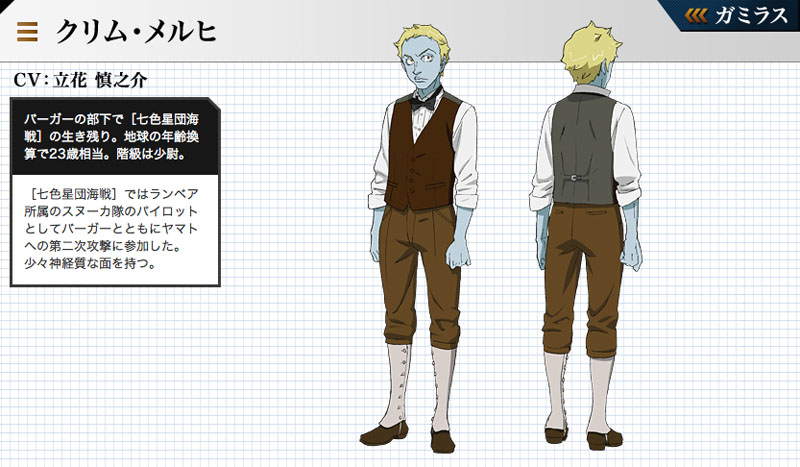 A subordinate of Berger and a survivor of the Battle of the Rainbow Star Cluster. Equivalent of 23 Earth years old. His rank is Second Lieutenant. Participated in the second attack on Yamato with Berger as part of Lambea‘s Snuka corps. He has a nervous disposition. 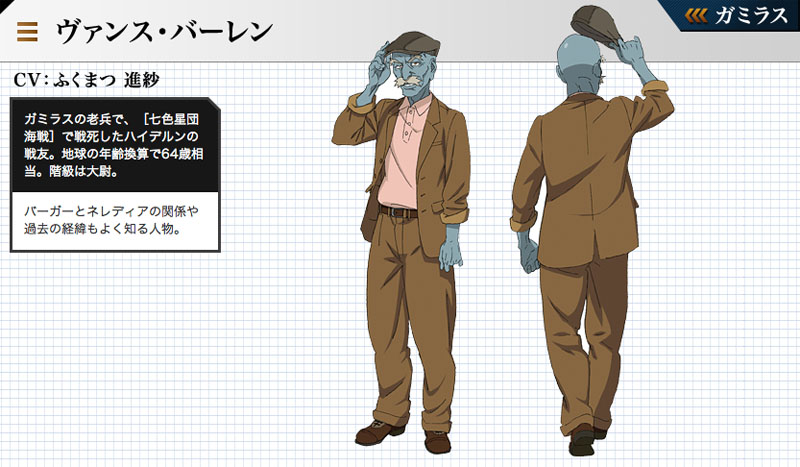 An old soldier of Garmillas, and a comrade of Haidern, who was killed in the Battle of the Rainbow Star Cluster. Equivalent of 64 Earth years old. His rank is captain. He is well aware of the past relationship between Berger and Neredia. 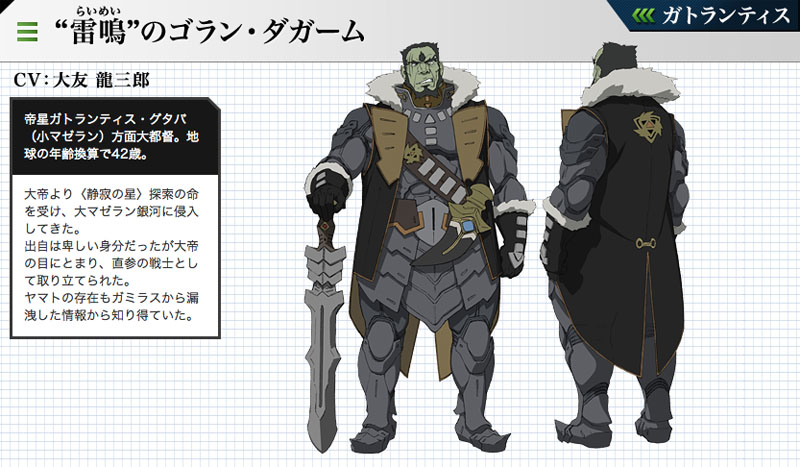 Great Governor-General of Gutaba (Small Magellanic Cloud) for the Gatlantis Empire. Equivalent of 42 Earth years old. Under orders from the Great Emperor “Star of Silence” to search for life, he invades the Large Magellanic Cloud. Although he is from a lowly caste, he caught the eye of the great emperor and was drafted as a warrior. He learns of Yamato‘s existence via information leaked from Garmillas. 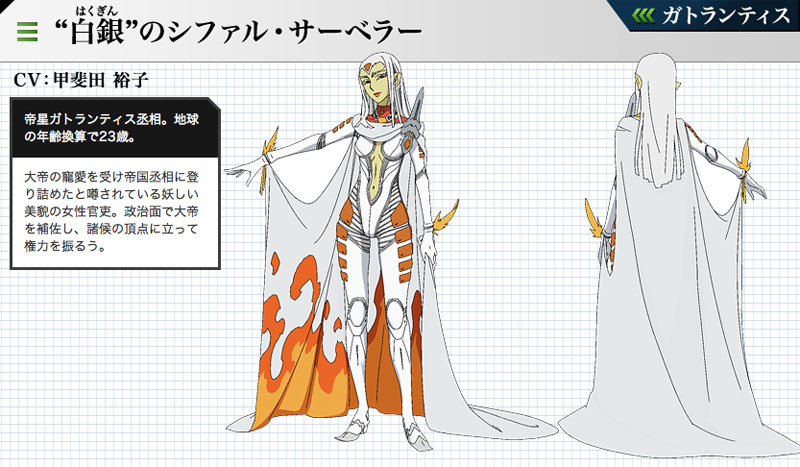 Prime Minister of the Gatlantis Empire. Equivalent of 23 Earth years old. A mysterious beauty who is rumored to have climbed the ranks after receiving the favor of the Great Emperor, eventually becoming Prime Minister. She assists the Great Emperor in the political arena, wielding enough authority to stand at the apex of power. 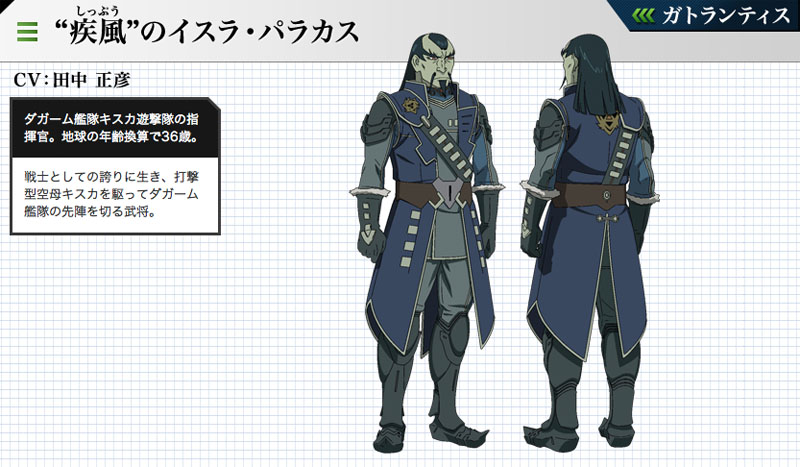 Commander of the Kiska Guerilla Corps in the Dagarm fleet. Equivalent of 36 Earth years old. A commander who lives for his pride as a soldier, commands the strike-type carrier Kiska at the spearhead of the Dagarm fleet. 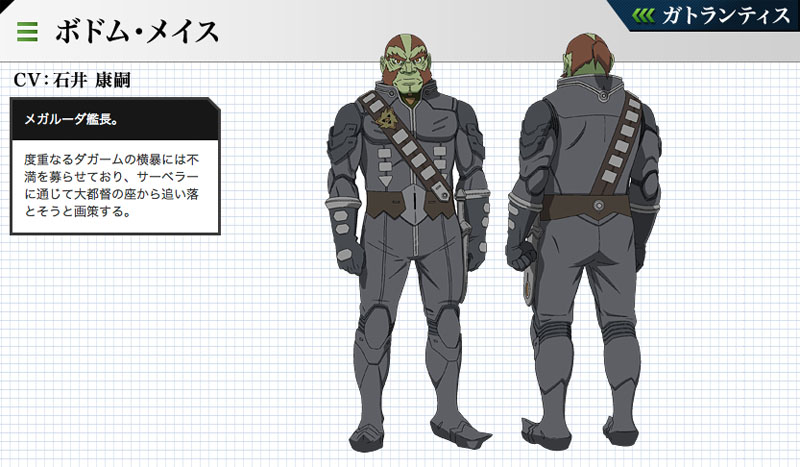 Captain of Megaluda. Frustrated by the constant tyranny of Dagarm, he schemes with Sabera to have him pushed aside as Governor-General. 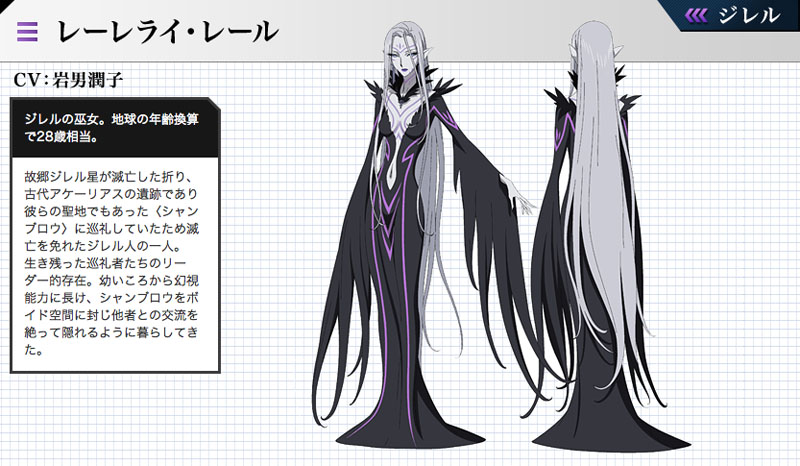 A Jirellian shaman. The equivalent of 28 Earth years old. When her home planet Jirel was destroyed, she made a pilgrimage to Shambleau, an ancient Akerian ruin and a sacred place for Jirellians trying to avoid extinction. She leads the surviving pilgrims and has been adept at creating visions since she was young. They survive by sealing Shambleau in void space and cutting off all contact with others.