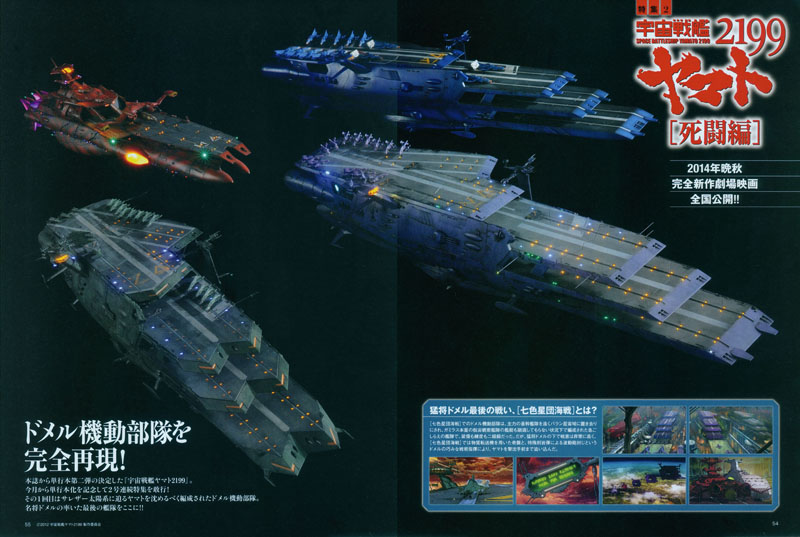 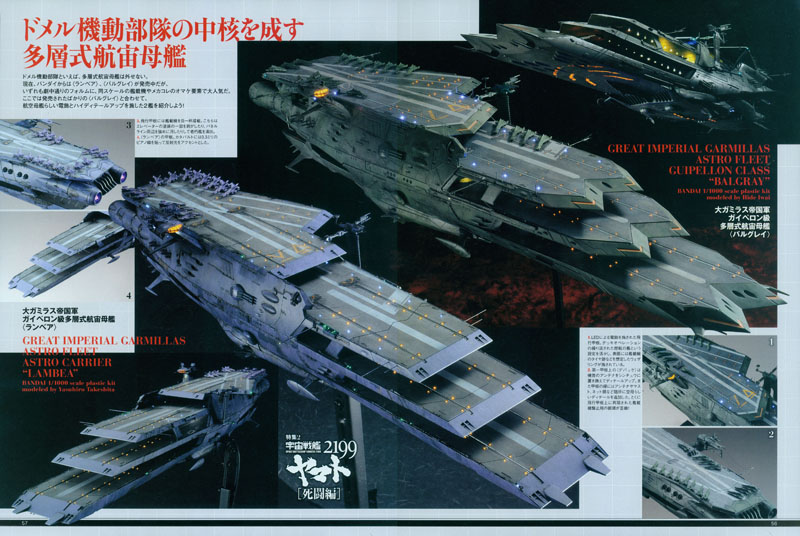 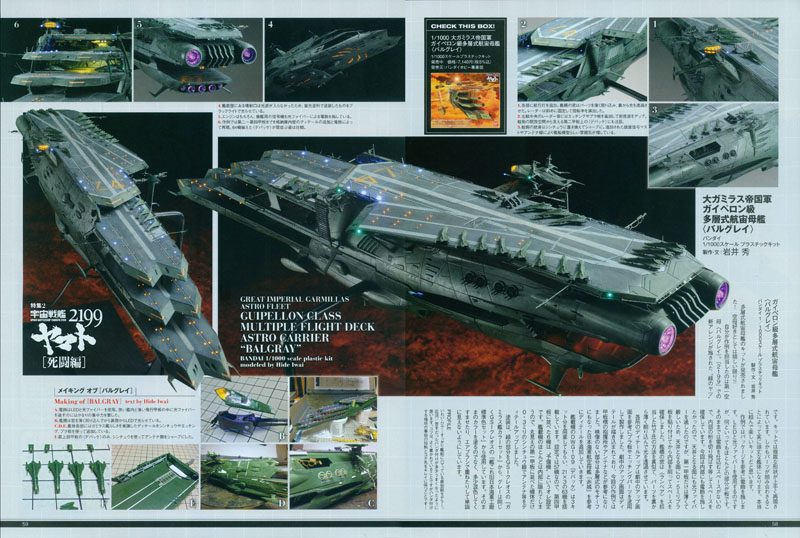 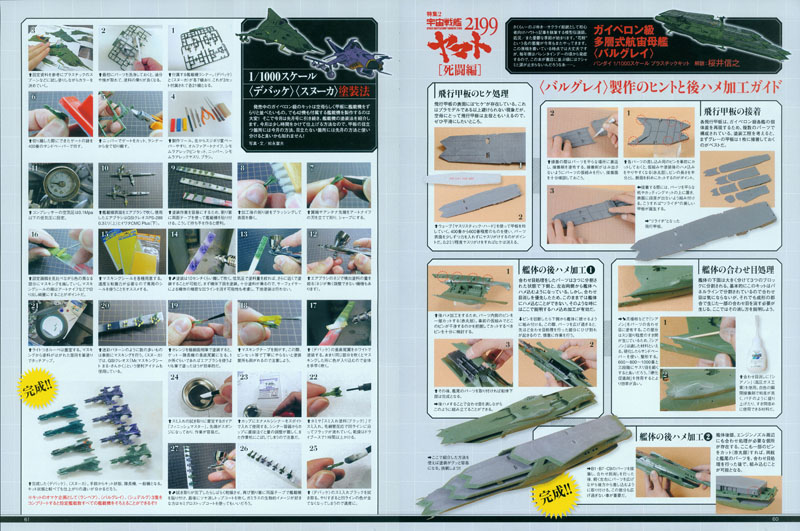 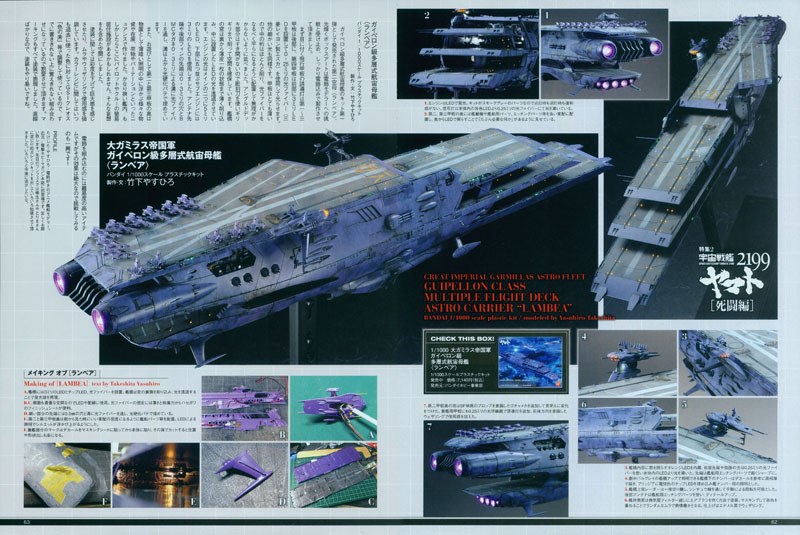 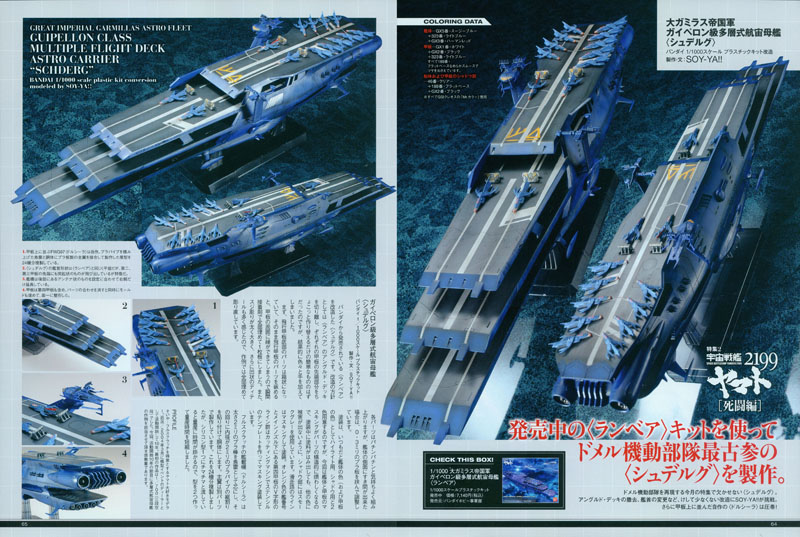 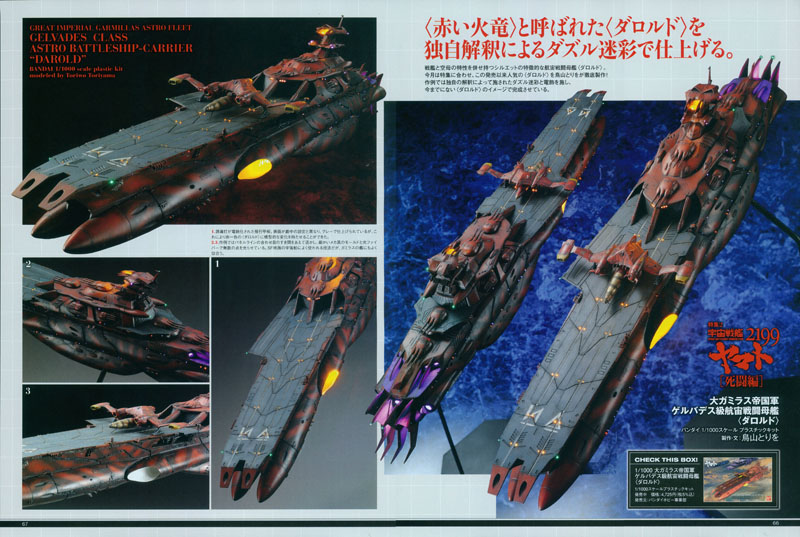 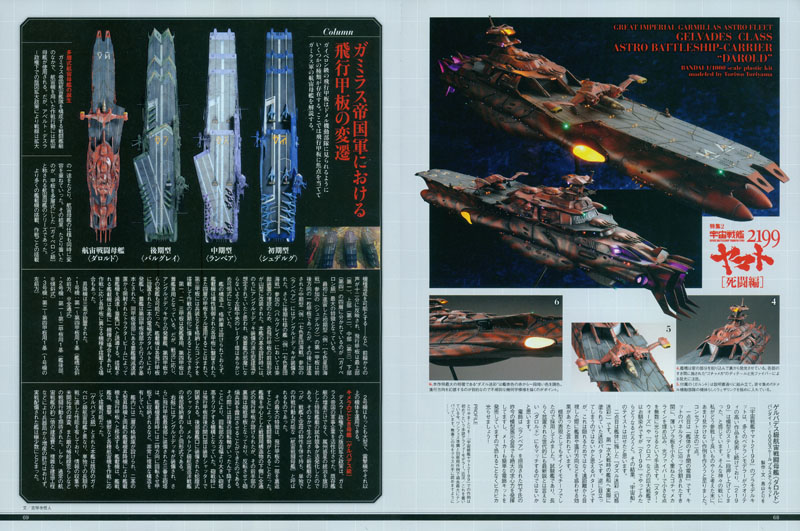 Evolution of the flight deck in the Garmillas Empire forces

As can be seen in the Domel task force, there are several types of flight deck in the Guipellon class. Here we focus on the flight deck and examine the Garmillas carriers.

The birth of the multi-deck astro carrier

Among the combat vessels that make up the Garmillas Empire astro fleet, carriers are used for military operations that make use of aircraft. As the front continually grows under the expansion policies of Abelt Dessler, the specifications of carriers also repeatedly evolve at any given time. This resulted in a series of multi-deck carriers called the Guipellon class.

These ships more than reflect demands from the front to allow deployment of several different models of aircraft equipped for a variety of strategies, and the distinctive feature of the Guipellon class is the division of four layers: top deck (first), upper deck (second), central deck (third), and lower deck (fourth).

The first model to be built (Shuderg) had unidirectional decks, but the second (Lambea) was equipped with an angled deck. A later model (Balgray) had the forward edges of its deck reconfigured with mountain-shaped extensions for additional sensor equipment. At the time this model was designed, it seems to have been assumed that it would use the angled deck variation, so the radar tower on the central port side became retractable so as not to interfere with launching and landing aircraft.

There is no hangar built into the structure of the ship, so aircraft are tethered to the decks for inertial control. Also, it is rare for all four decks to be fully employed, since the third deck is often used for storage of containers containing armaments for prolonged operations.

The first, second, and third decks are used only for launching craft and the fourth is dedicated for landings. However, depending on the tactical situation, launch and landing from the angled deck is also possible. Each deck is equipped with two electromagnetic catapults to launch aircraft with the basic consideration that landings would be achieved by approaching the rear of the carrier. An arriving craft is decelerated by a tractor beam positioned at the rear, then guided to the entrance of the landing deck. In some cases, one type of aircraft is dedicated to each class of carrier, but different models can be taken on board depending on strategic demands. 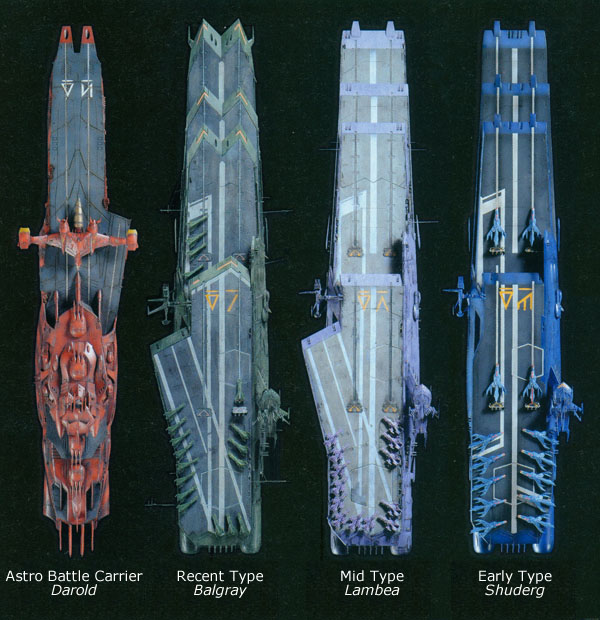 Unit 1: one group for first deck to fourth deck (moves diagonally forward and left of the bridge, accesses the entire system)

Unit 2: one group for first deck to second deck (inclined toward the stern)

Unit 3: one group for second to fourth deck (front left of unit 1)

Unit 2 is the largest, and can manage torpedo bombers and larger craft.

Under the territorial expansion policy of Abelt Dessler’s regime, the active military branch of the Garmillas Empire not only increased the production of existing vessels, but also the competition between provincial planets to develop special prototype vessels. Among these, one of the newly-created vessels, called an Astro Battle Carrier, combines the characteristics of an aircraft carrier and a battleship, giving it the ability to conduct independent operations.

Its main feature is to prepare for combat by inverting part of the flight deck. Although an open flight deck is established below the combat structure around the bridge, the front half serves as a gun deck that is exposed when the structure is flipped. Since the left/right turning range of the turrets is wider than the deck mechanism, they are kept in a stowed position when turning on the rotational axis. The openings in front of and behind the flight deck are closed by armored shutters when the guns are activated. The stern landing port is equipped with a bellows-type shutter like that seen on the rear hangar of the Meltoria-class astro battle cruiser.

The ship has a complex structure with an angled deck on the starboard side and a main gun battery at the rear flight deck that must rotate in the 2 o’clock direction to clear the landing path.

There are two layers of hangars inside the ship; aircraft are lifted to the flight deck by two large elevators located at both port and starboard. Various craft such as fighters, bombers, fast strike, and reconnaissance can be made available depending on strategy.

Unlike the existing Gaiperon Class Astro Carrier, the Gelvades Class is suitable for long-term solo operations such as exploration of unknown territory, information gathering, or battle action like the breaking of enemy supply lines. However, its building costs are about double that of a conventional battleship, and the complexity of its construction process limits its production, so only a few have been deployed. 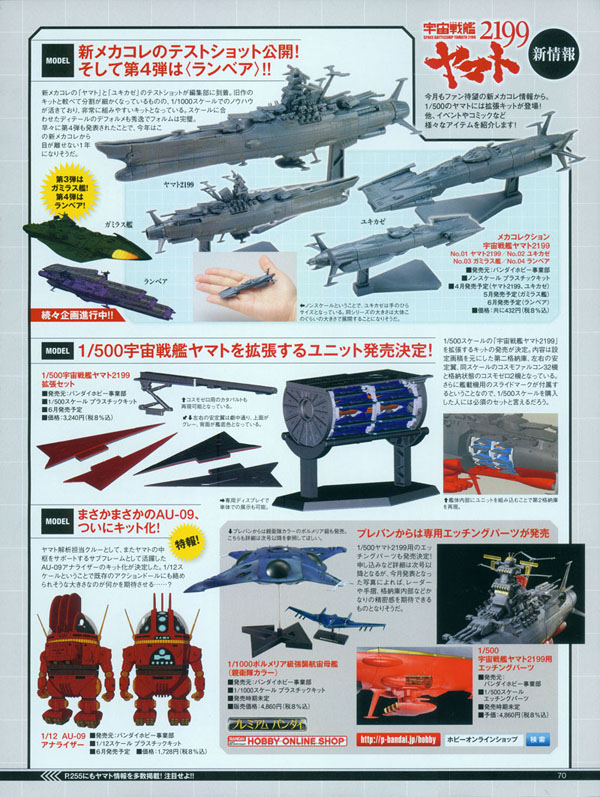 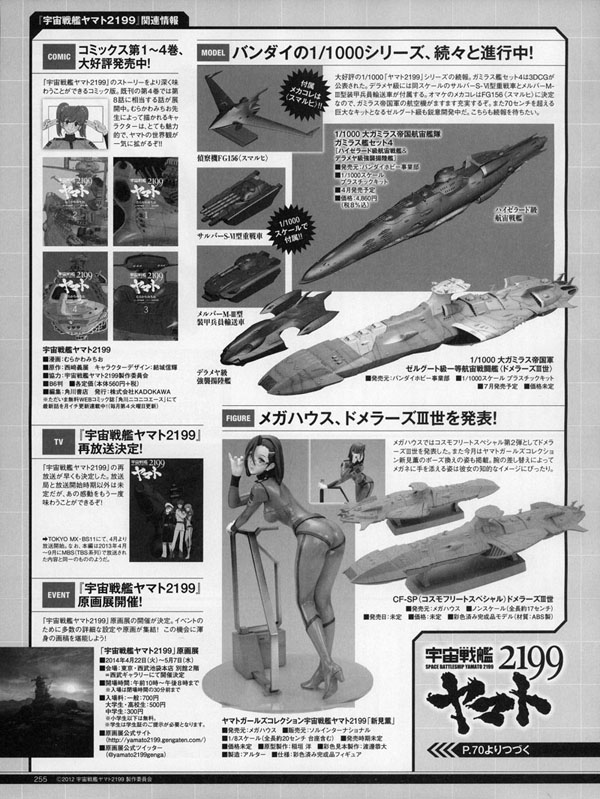