1:45:00 – the headliner finally arrives: series director Yutaka Izubuchi takes a seat behind the desk and a 45-minute Q&A begins. Among other things, he says that he wishes he could go back 39 years and tell his high-school self that he would one day make this series. When asked for his views about the original Kodai vs. the newer version, he describes the original as “defective.” (Of course, that was the point.)

Regarding Episode 25, he says there is one more tidbit that hasn’t been seen yet, a small scene involving Nanbu, which will appear on the home video release. He also says he’d like to go back and fix up some of the animation problems in Episode 22. Someone asks him where the swimsuits came from in Episode 24, and he reveals that they were another product of OMCS. Truly, that thing is a dynamic do-all!

2:26:33 – Izubuchi and the Yamato Girls offer one more salute to the heroic efforts of the production staff.
2:34:11 – back to the regular program. Everyone is given the task to draw Yamato from the rear. Sayako Tojo’s drawing is the first to be shown.

2:35:05 – Rio Nanase’s drawing is pretty goofy, but Sayako finds a way to make it even goofier!

2:39:29 – finally, Shiki’s Yamato turns out to be a pretty good complement to the front end she drew last week.
2:43:40 – the stage is handed over to Noa Mizuki to show off her trade, looking cute with an umbrella.

2:44:49 – everyone lines up for umbrella-holding and race-queen-posing lessons. Hey, have YOU ever tried it?

2:49:00 – Noa finishes up and leaves, giving the girls time to consider which scenes from Episode 26 they’d like to re-enact. Rio already has hers figured out.

2:53:33 – Sayako goes first. Rio stands in for Yuki and Sayako gives her a running hug. “Welcome back!” Mimicking her character perfectly, Shiki throws a salute.

2:54:05 – Momoko relives the moment Harada turned around from her babbling to find Yuki reviving in the capsule. (Again, Rio stands in.)
2:54:53 – Rio reveals why she wrote down Captain Okita’s final line, so she could deliver it herself.

2:54:59 – as Ryo slumps to the side, her captain’s hat falls off, completely wrecking the moment. That just won’t do.

3:12:44 – Yutaka Izubuchi reappears, along with yet another guest: character designer Nobuteru Yuuki! The very man whose pen designed the wigs that these poor girls have been fiddling with for the last 26 weeks!
3:15:50 – conversation barely begins when all eyes are drawn off camera toward an unexpected arrival…

3:23:54 – Everyone takes a pocky break. Nobuteru Yuuki enjoys a well-earned moment.
3:35:00 – the others clear off for a bit, leaving Shiki for a one-to-one talk with Izubuchi. She can’t get anything out of him regarding the 2014 movie, except that something more about it will be announced before the end of the year.

And then, in a moment long coming, her emotions suddenly overtake her and she weeps openly. Rio steps in to offer comfort. It’s poignant to consider that this moment happened because a man named Yoshinobu Nishizaki imagined a flying battleship more than 40 years earlier. Its impact has never lost its power to affect peoples’ lives.

3:51:18 – Momoko collects herself and finishes her farewell.
3:57:52 – since it’s probably best not to force someone else to go it alone, the rest of the goodbyes are done in pairs. 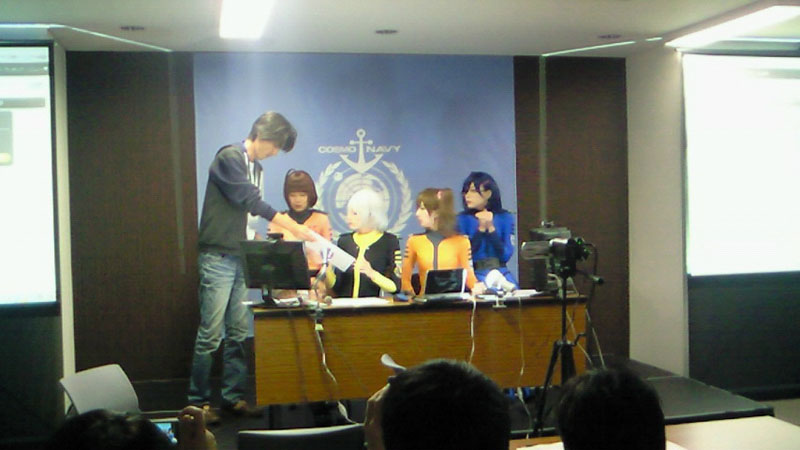 Since photography was permitted, numerous photos and blog postings from the party appeared afterward. (See two sources here and here.) This is a wider view of the set, with the producer on hand.

While in session, screens of the actual Nico Nico webcast were projected on each side of the stage. They had a slight time-lag, but that was not evident to the viewers at home. Right: Izubuchi in conversation. 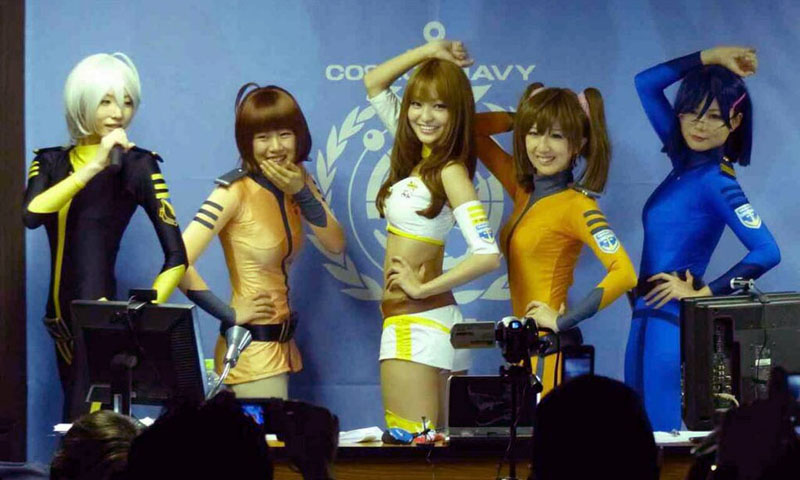 A shot of the posing class, taken from the audience. Visit Noa Mizutani’s blog here.

Back stage before the show. Twitter comment from Shiki Aoki: The Yamato sendoff party was fun!! Everyone has great love for Yamato! It’s not over yet! There’s still a lot of fun in store. Thank you so much!!!

From Sayako Tojo: Thank you for such a long time yesterday! It was fun talking to everybody! It’s wonderful that I was able to meet so many people through being a Yamato Girl!

From Noa Mizutani’s blog: Wow, I cried at that last episode. My eyes were swollen and there was no handkerchief nearby, so I did my best to bear it. Yamato is cool. I want to see a blu-ray that hasn’t been cut for broadcast. It was fun to watch it with the Yamato generation. There was so much feeling! I think it’s a common pattern for fans of the original to be disenchanted by a remake, but a lot of original fans were there to the last! It’s an anime that more than one generation can enjoy.

And!! There was a significant announcement at the end!!! Waa!! A completely new feature film version of Space Battleship Yamato! I’m looking forward to what kind of story it will be. I absolutely want to see it in a movie theater. I won’t forget my handkerchief!

From Momoko Miyauchi’s blog (before the show): Tomorrow will finally be the last episode of Yamato 2199. I want to see it, but truthfully I don’t want to. You can tell I’m a Yamato novice, but I keep asking for support for Yamato. As a Yamato Girl, I want to spread this great work around a little. My ability is poor, but I watch Yamato in the live broadcast with a smile. I think such a wonderful time should be shared with many people.

In fact, the Yamato Girls were chosen after an interview. I was chosen as Makoto from the beginning. Because the role of Makoto came so far, I was nervous. Those who have seen the animation, don’t you think Makoto-chan is delicate? She’s so pretty in the anime, I wonder if it would be difficult in three dimensions. Thanks to everyone’s warm comments, you put me at ease so I could speak freely. My tears haven’t come out yet, but maybe they will for the final episode.

I had to talk a little because it will be sad tomorrow. Thank you for reading! (See a post-show blog entry here.)

See a short back stage video of the girls on Nico Nico here. (Load time may be slow.)