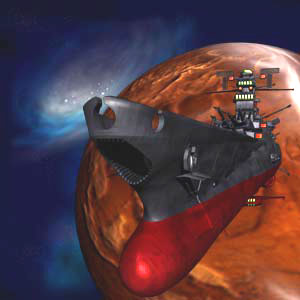 For over three decades, Space Battleship Yamato has been compared on many levels to Star Wars, and with good reason. But something usually overlooked is their timing, by which measure they are practically twins. Both franchises had their initial breakout from 1977 to 1983, both experienced dormancy from the mid-80s to the mid-90s (with occasional radar blips) and both came roaring back to life in the same year, 1998. From that point on, they were revitalized for new generations of fans and show no signs of abating.

1998 was the year Star Wars returned to movie theatres and Leiji Matsumoto returned to Yamato for its 25th anniversary renaissance. And the single most important event that happened under his watch was the creation of Yamato games for the Sony Playstation. In every important respect, it was what Japanese fans were waiting for all along: a slick re-imagining of the original with the added feature of interactive, real-time gameplay.

The character and mecha designs had been updated, the CG was state-of-the-art for its time (and still looks pretty darn good today), and new animation was created for the cutscenes. With all the attendant buzz and glitz, it might just as well have been a movie opening. Bandai released three Playstation games from February 1999 to September 2000. They breathed new life into the first and second Yamato stories and laid the groundwork for more to come. 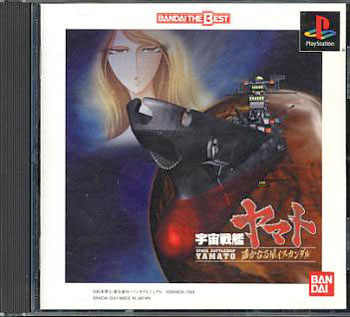 Story-wise, the premise is a familiar one: on its quest for the Cosmo Cleaner D, Yamato has to fly to Iscandar and back in just one Earth year with the Gamilas constantly throwing obstacles in their path. This game follows the lead of many of its predecessors; energy resources have to be carefully managed, the enemy has to be overcome by planning and strategy rather than brute force, and the calendar is constantly ticking down to the end of life on Earth. What made this one different and more engaging (if you could get through the considerable language barrier) was the ability to command individual characters to do specific jobs, sort of a “Sim Yamato” scenario.

Like individuals, they have their specialities. Shima is the top helmsman. Kodai is the top combat leader. Nanbu is the best gunner. Mixing their positions is liable to get everyone killed. They can also get tired if they’re overworked, and are programmed to advise or protest whenever it looks like you’re about to make the wrong move. This makes the game somewhat customizable, allowing you (as the captain) to play it safe or walk a tightrope depending on your own preference.

As a result, the captain himself is a key character who needs his own downtime, because only he can authorize the Wave-Motion Gun to be fired or the ship to be warped. This only changes when Kodai becomes deputy captain. Authentic details such as this were what kept Japanese fans coming back for more.

The story is divided up into nine stages with multiple events to contend with. Stage 1, for example, goes all the way to Pluto. On the way to Iscandar, players get some new experiences mixed in with the familiar ones. Gamilas ground troops are waiting for you on Mars. A wily Gamilas commander named Korsak is ready to jump you just outside the solar system, and you have to board his ship to defeat him. At one point the younger members of the crew are incapacitated, requiring Captain Okita and the elders to run a ground mission on Zaras, a planet of giant insects. And that’s just a sampling; there is plenty of action for someone who thinks they’ve seen it all.

Many parts of the story come from Leiji Matsumoto’s manga. When Yamato reaches Balan and Domel drops the artificial sun, the Wave-Motion Gun opens a hole and Yamato passes through, exactly as in the manga. At the climax of the battle at the Rainbow Star Group, Domel tries much more than a suicide attack; he means to board Yamato and destroy her from the inside, forcing the crew to fight him off. 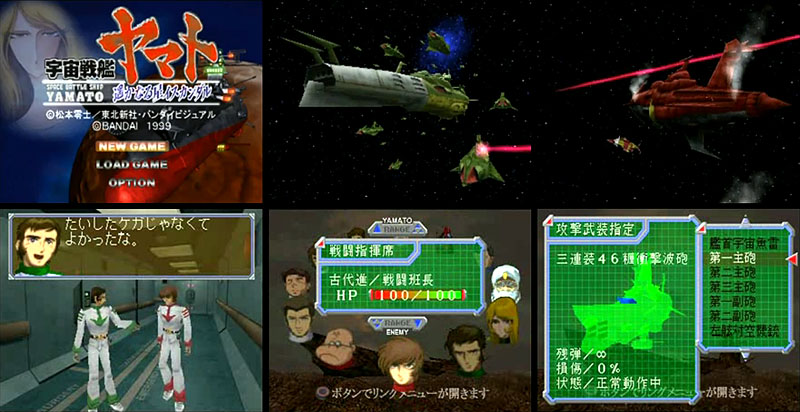 The bulk of the story is told via low-rez “puppet shows” with moving CG marionettes and screen text dialogue, cut together with spaceship models for exterior scenes. But 25 minutes of full animation was produced for the story’s most important events; over half of this is derived from the final three TV episodes.

There are even a few homages to other SF stories. On the way to Gamilas, one of the new obstacles devised for the game is a superfortress (which looks a lot like Deep Space 9) with an exceptionally strong shield that must be destroyed from the inside by a small team (but there are thankfully no Ewoks).

See a slideshow of animation stills from the game here.

Read a FAQ and walkthrough by Nick Flor here. Visit our links page for more!

Naturally, it was the new animation that caused the most stir among fans who were less interested in the gameplay aspect, and Bandai answered the call by making it available in two other forms: as freely accessible files on the third PS game (shown below) and a limited-edition DVD released with first PS2 game.

The first game was a big hit with fans and, with additional support from a wave of new merchandising, got everyone hungry for Yamato all over again. Anyone who wondered what Bandai might do with a followup game only had to wait a little over a year to find out.

Another surprising thing about the first game was the unusual amount of book coverage it generated, which should serve as convincing proof of its popularity. Above, left to right:

This limited edition paperback was the first publication of any kind for the game, distributed three months before release. It featured color stills and mecha art, but Character sketches dominate the book, none of which were reprinted elsewhere. Personal messages from each designer punctuate their sections. The book was a promotional giveaway limited to 600 copies.

This smaller package had much of the same material but with more color pages. It was probably made as a giveaway for the Tokyo Game Show in March 1999.

Consisting almost entirely of maps and strategy tips, this book includes very little for the non-gamer.

Of all the strategy guides produced for the first Playstation game, this one is second behind the Locus edition in terms of appeal for the non-gamer. Its ratio of gameplay info to general info is lower, meaning more pages are devoted to the art of the game than most others. It also includes a short interview with Leiji Matsumoto.

Full color from front to back, this book is primarily filled with maps, charts, and graphs, but also contains several stills from the game’s cutscenes and a few product pages showing model kits and contemporary video releases. It also contains some of the best views of the CG elements rendered for the game.

This aptly-named volume is a terrific combination of TV series coverage and a guide to the first Playstation game. Though most of the book is a collection of maps and strategies, a sizeable portion is devoted to the making of the game and comparisons with the first anime series. The large number of stills makes this a good addition to your shelf even if you don’t have access to the game.

As various anime programs have been turned into games, artbooks have kept pace with the process and investigated how an older series is spruced up for a new medium. There is no finer example of this than the Fixed Data books for the Yamato Playstation games. If you don’t own a copy of the games themselves, these volumes function perfectly well on their own, leaving strategy to other books entirely and spending all their pages on photostory, artwork, and interviews. (Translated interviews from this book are linked at the end of this page.)

Manga and illustrations by major artists, some of whom worked on the game itself. Adapts key episodes of the TV series in new format. Highly recommended. Read more about this book here.

The Tracks of Heroes

This game was a genuine treat for hardcore fans: a bonus disc with a brand new game based on a piece of Yamato lore that was practically unknown outside of Japan.

After the premature ending of the original TV series in 1975, Leiji Matsumoto moved on to other projects while Yoshinobu Nishizaki tried everything he could think of to bring Yamato back to life. Matsumoto himself contributed to this effort in the summer of 1976 when he wrote and drew a “side story” manga titled Eternal Story of Jura (see it here). Though it was eclipsed by Yamato‘s blockbusting comeback a year later, devoted fans never forgot it, and with the release of this game they could experience it for the first time as an interactive game.

Above left is the game’s main menu. The bottom option takes you to a second menu screen from which the Jura story begins. No animated cutscenes were created for it; it is told only in pantomime by the Playstation CG marionettes. The only voice heard is that of Jura herself in the opening and closing narrations. The pantomime presentation is occasionally broken by gameplay when Yamato faces off with Gamilas ships, but other than this the story follows the original manga line for line.

See a slideshow of the first several minutes here.

The other features on this disc were also a fan’s delight: unlimited access to the pantomime and cutscenes from the first game (above left) which took about two hours to watch, an art gallery (center) of characters and mecha, including a preview of designs for the forthcoming Playstation 2 games, and a “Saved Data” collection (above right) you could download to a memory card and use to enter either of the previous games at any point.

Read a FAQ and game walkthrough by Nick Flor here

A word about Game Translation (contributed by Andrea Controzzi)

At the moment, the Yamato Playstation games are available only in Japanese, a huge problem for those without language skills, owing to the text-heavy nature of the game design. Attempting to play the game despite this obstacle means a lot of “Game Overs” and frustrating brute-force attempts to find a solution by trial and error rather than strategy and cunning, wasting a considerable amount of the fun and challenge involved. Also, many bonuses and important references are likely to be missed by non-Japanese speakers.

It is interesting to note that the games are born ready for translation, despite being produced only for Japan. Almost all the dialogue appears on-screen, which makes it very easy to change. There isn’t even a need to change the font, since Roman characters are also displayed; only text data needs to be rewritten. Also interesting to note is that on-screen text in the cutscenes is already in English. This strongly indicates that an English translation was planned for, but sadly so far this remains only a hypothesis. 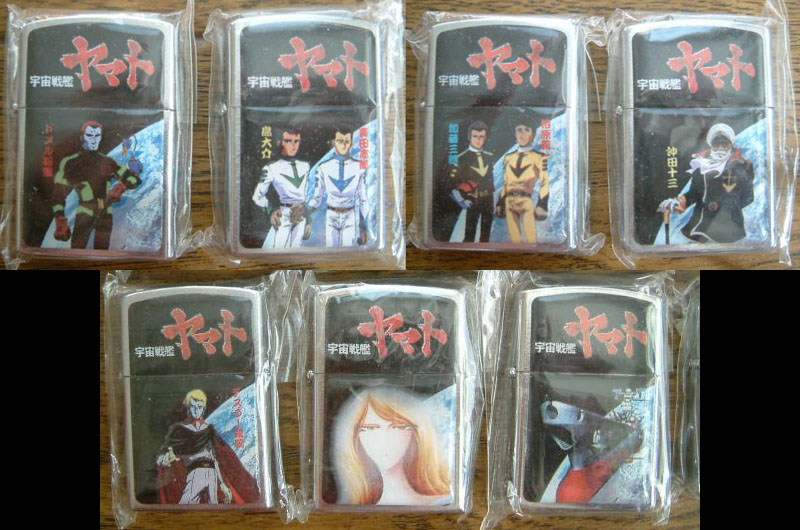 A complete set of lighters with Playstation character design; ideal for those cigarette breaks between gaming sessions.

Above and below: Telephone cards for the first two games (Promotional premiums: March 1999 and May 2000, respectively) 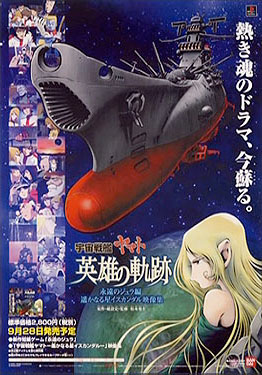 Poster Art for all three games