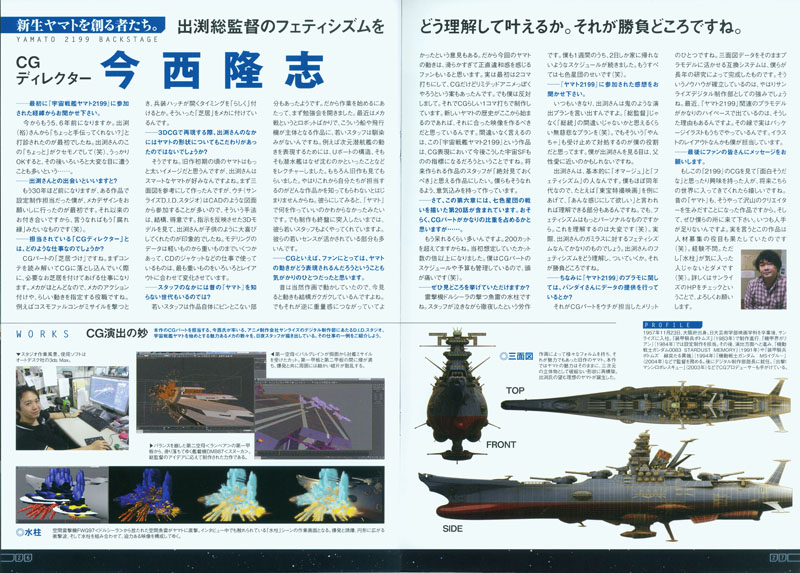 How to understand and fulfill the fetishism of General Director Izubuchi. It is a critical point. 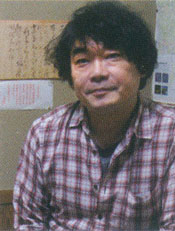 Profile: Born November 23, 1957 in Osaka. After graduation from Japan University’s art department film school, he joined Sunrise. He worked in production on Armored Trooper Votoms (1983), then took charge of design on Panzer World Galient (1984). He then proceeded to work on Mobile Suit Gundam 0083 Stardust Memory (1991), Armored Trooper Votoms Shining Heresy (1994) and served as a supervisor on Mobile Suit Gundam Igloo (2004). Afterward, he was appointed head of digital production. He was also the CG producer on Sortie! Machine Robo Rescue (2003).

Interviewer: Please tell us the circumstances that lead to your involvement in Yamato 2199.

Imanishi: I got involved about five or six years ago. Yutaka Izubuchi first approached me by asking, “Can you help me out?” Izubuchi can be a little treacherous (Laughs), and in many cases when I said OK carelessly, it got me into big trouble…

Interviewer: When did you first meet Mr. Izubuchi?

Imanishi: It was about thirty years ago already. I was responsible for design production on a certain work, and at first I asked him to do some mecha design. Because of our relationship since then, it has become a “fatal bond,” so to speak. (Laughs)

Interviewer: What is a CG Director’s job, and what are you responsible for?

Imanishi: It’s the CG part of the story flow. When I first read and narrow down the storyboard, I dive into the parts for which CG work is necessary. Since it’s mostly mecha, I’m often in charge of mecha action, which seems to be a post that specifies movement. For example, when a Cosmo Falcon shoots a missile, the hatch opens with a certain timing. I add such “play” to mecha. 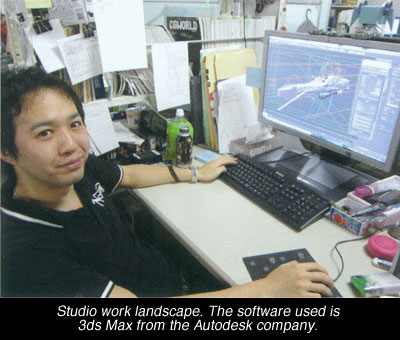 Interviewer: Wasn’t Mr. Izubuchi particular about the shape of Yamato when it was reproduced in 3DCG?

Imanishi: That’s right. Although I think that in the early stages of the original, Yamato had a denser image, Izubuchi prefers a smarter Yamato. At first I made it by referencing a three-figure diagram. Since we (Sunrise DID Studio) have participated in a number of CAD-style designs, that technique is very much our forte.

When he saw a 3D model that reflected his instructions, it was impressive to me that Mr. Izubuchi was like a kid in a candy store. The modeling data on several things goes from light to heavy, and for projects like the CD jacket, the heaviest things are changed in various ways for the layout.

Interviewer: Is anyone on the staff from the generation that doesn’t know the old Yamato?

Imanishi: There were parts of the production itself which didn’t hit home with the younger staff members. So when we first started working, I held study sessions. These days, when you mecha war it only refers to robots, so the young staff was unfamiliar with a work mainly made up of ships and airplanes. For example, to express the motion of a dimensional submarine, the first lecture was about the structure of a U-boat and why a submarine sinks.

We showed them the previous work, of course. We wouldn’t have gotten anywhere if we hadn’t showed them what sort of show we would be taking charge of. From their point of view, they didn’t seem to know how to make Yamato. But now that production has entered the final stage, the young staff is doing very well. Their younger sensibilities are harnessed in many ways.

Interviewer: Speaking of CG, I think fans were anxious about how the movement of Yamato would be expressed.

Imanishi: Because it was moved by hand-drawing in the old days, the motion is quite wobbly when you look at it now. But conversely the opinion is that it had a good feel of weight. Therefore, to be honest, the movement of Yamato feels too smooth this time and I think fans will feel a sense of incongruity.

In fact, at first we tried it at 2-frame intervals, and although it was CG there was a proposal to give it a whiff of limited animation. But I opposed that, and produced it in single-frame like CG. If a new history of Yamato starts from here, I think it should be made with a suitable image. I can say without a doubt that the work called Yamato 2199 will become an index for CG expression of SF space objects in the future. I want the staff of future works to think of it and say, “You should absolutely watch that.” We’re making it with enthusiasm so that can come to pass.

The wonder of CG production

The CG part of this work is lead by Mr. Imanishi at D.I.D. studio, which is the digital production department of anime production company Sunrise. The staff creates images day and night of many attractive mecha, including Space Battleship Yamato. Let’s introduce some examples of their work.

Left: The scene of the first aircraft carrier (Bulgrey) being hit in the side by anti-ship missiles. Smoke rises between the first and second deck, and fine debris is scattered by the explosion.

Right: When the second aircraft carrier (Lanbea) loses its balance, the carrier-based planes DMB87 (Snuka) slide across the first deck. It is a tour de force that was produced in response to an idea from the general director. 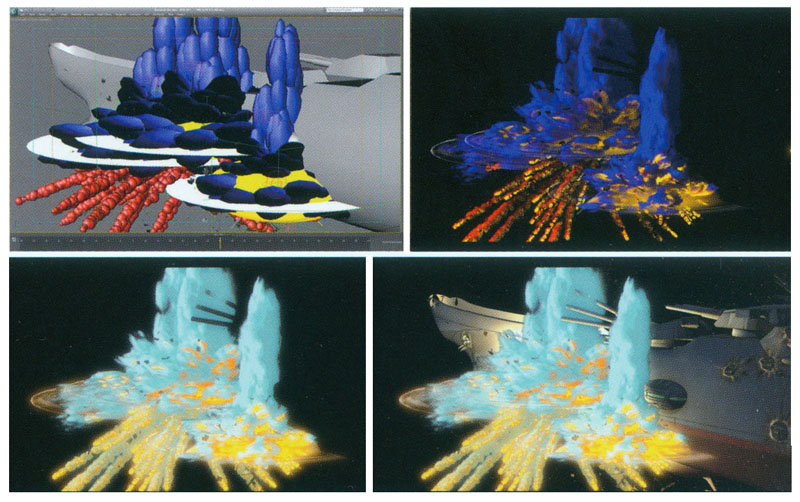 Water column: A torpedo shot by the Astro Torpedo Bomber FWG97 (Dolcia) scores a direct hit on Yamato. It became the “column of water” scene touched on in the interview. The explosion causes a shock wave that expands in a circle, and a column of water was combined to produce a powerful picture.

Interviewer: By the way, Chapter 6 includes Episode 20, which features the battle of the Rainbow Star Cluster. I think the CG part accounts for considerable weight in that.

Imanishi: I’m amazed at how much there was. More than 200 scenes. It was more than double the number of scenes that was originally expected. Since I also manage the budget and schedule of the CG part, it gave me a headache. (Laughs)

Interviewer: Could you mention the highlights?

Imanishi: It was the water column torpedo shot from the torpedo bomber Dolcia. It was laborious work that had the staff up all night crying. It was a schedule in which I could only go home twice over the course of one week. That was the impact of the Rainbow Star Cluster. (Laughs)

Interviewer: What’s your impression of working on Yamato 2199?

Imanishi: Mr. Izubuchi always brings up production plans like a demon. His plans are so merciless that we think of him as “the emperor” rather than the “general director.” (Laughs) I think my role is to find remedies for all his “mischief.” I look at Mr. Izubuchi with something like a father’s love. He is fundamentally a person of “homage” and “fetishism.” I am nearly the same age as him, so when he raises a Toho special-effects movie as an example and says “I want it to feel like that,” I understand that part. But since fetishism is more personal, it’s harder to understand this. (Laughs) In fact, his fetishism for Garmillas is considerable. How to understand and fulfill Mr. Izubuchi’s fetishism is a critical point.

Interviewer: By the way, do you provide Bandai with the data for Yamato 2199 plastic models?

Imanishi: That’s one of the merits in taking charge of the CG part. A compatible system can utilize the data in a three-figure diagram for plamodels, something that has been completed after years of research. After all, establishing such know-how is the strength of the Sunrise digital production department. That’s the reason 2199 plamo have appeared at such a considerably high pace recently. In fact, it opens up an internal relationship for package illustration, too. I am in charge of the layout for such illustrations.

Interviewer: Finally, I’d like to ask you for a message to the fans.

Imanishi: I’ll be glad if the people who watch the CG of 2199 think, “this looks interesting” and it will go off into the world of the future. That’s what the old Yamato did, and it produced many creators that way. And please come to us by all means. I never have enough hands. To tell you the truth, this work also serves as recruitment for talented people. No experience required. But they should be people who liked the “column of water.” (Laughs) Check the Sunrise home page for details, and thanks in advance. 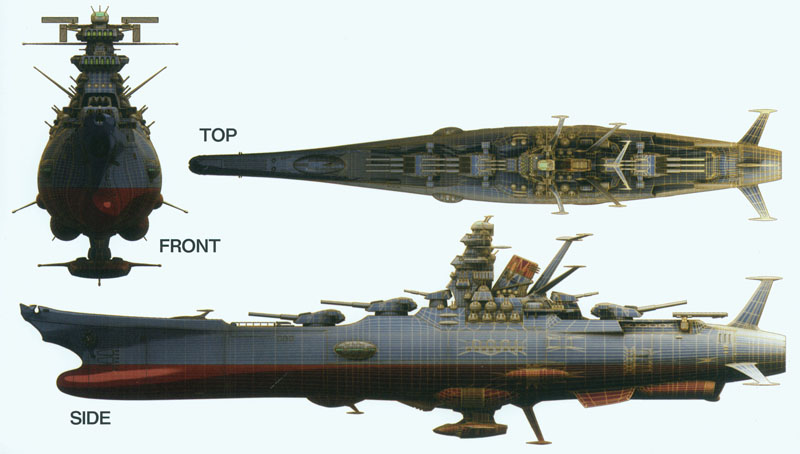 On of the charms of the original work was that it featured various forms by hand-drawing. Yamato‘s charm is intact in this work, its shape reconstructed without fail as a three-dimensional solid object. The ideal Yamato of Mr. Izubuchi was born.

Return to the Chapter 6 Program Book