Bandai today is one of the biggest corporations in Japan, due in no small part to their involvement with Space Battleship Yamato at such a pivotal time in the history of anime merchandising. In that time, the technique of designing and producing model kits has been revolutionized again and again. Proof of this can easily be seen by comparing the more recent Yamato kits to those of the production years.

The first big ‘revival year’ for Yamato was 1995, which saw a host of product releases and reissues to tie in with the kickoff of the new Yamato 2520 anime series. Hobby Japan, the magazine of record for model building, ran its first Yamato cover story in April, which looked back at the classics and forward to the new series. Bandai released their 2520 model kit a few months later, about halfway between the first and second animated video episodes. The series ended prematurely in 1996, generating no further kits, but modelers had certainly not heard the last of Yamato. 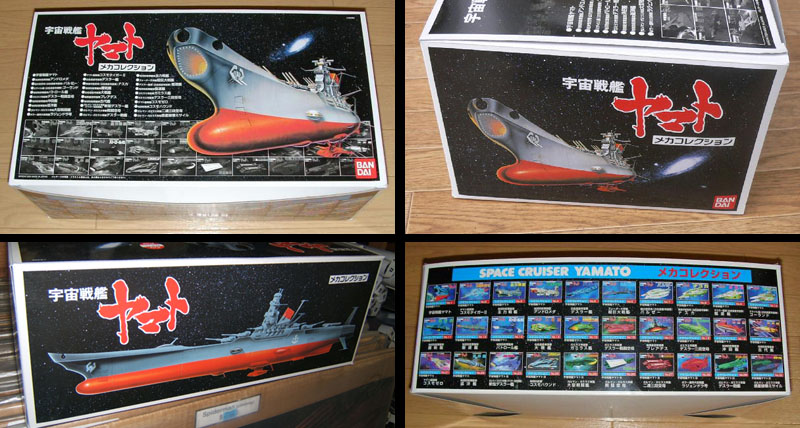 Bandai commemorated Yamato‘s 30th anniversary with several reissues, during which time all 30 of the miniature Mecha Collection Kits were made available in one gigantic set. The kits were all individually boxed just as they were originally released. 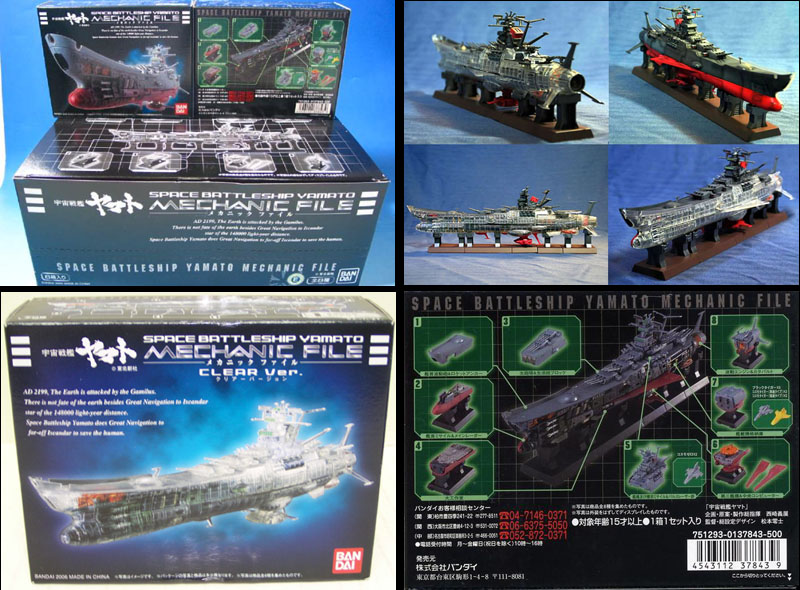 Sold in the manner of ‘trading figures,’ this Yamato is divided into eight sections, each of which is purchased separately (or in a complete set if you know where to shop) and assembled as a subsection to be combined with the others for a complete vessel. The interior parts are pre-colored and intricately detailed (right down to a special hanger deck for the Seamless Plane) and fit together like a puzzle. The kit is assembled without glue, so it can be taken apart and put back together at will. The finished model is over a foot long.

Interestingly, the inspiration for the Mechanic File kit was the same as the Space Battleship Yamato itself: the original naval battleship. A popular live-action World War II movie called Men of Yamato was released in Japan earlier in 2005, followed by a wave of merchandising which included a kit exactly like this one for the Imperial Japanese Navy’s Battleship Yamato. 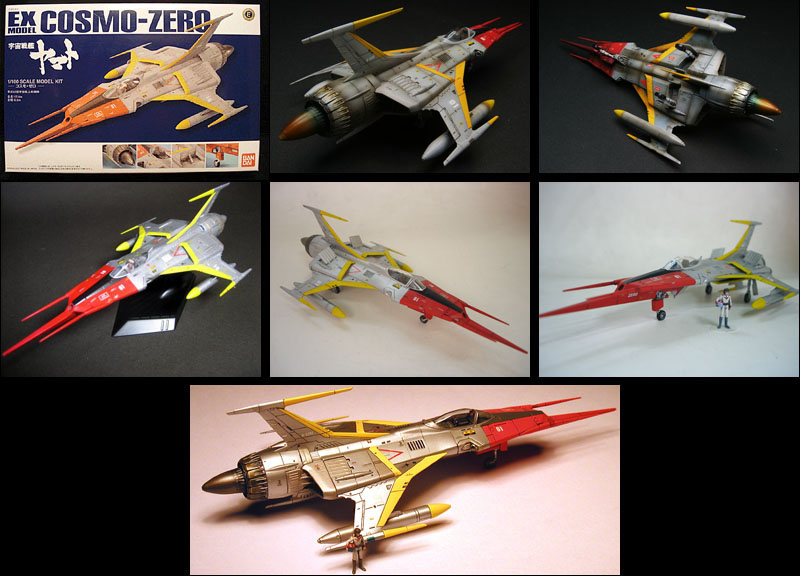 At just over 7 inches long, these EX models are slightly smaller than their 1970s equivalents, but the detail on these amazing kits has to be seen to be believed. All three go far beyond what was seen in the anime to demonstrate what these craft would look like in a real world of nuts, bolts, vents, vanes, and hatches. They require intricate paint-jobs to reach their full potential, but will reward the effort, as these photos attest. 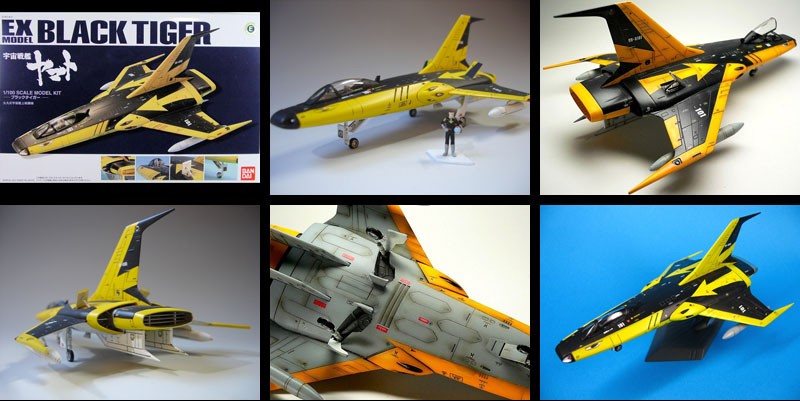 The Black Tiger is particularly impressive, starting as it does from the most under-designed of all three Yamato fightercraft. What began as a slightly tubby, rather simplistic space-plane in the anime (especially next to the exquisitely designed Cosmo Zero) finally emerges 33 years later as a sleek spitfire of a vessel, looking like mach 8 even when it’s standing still. 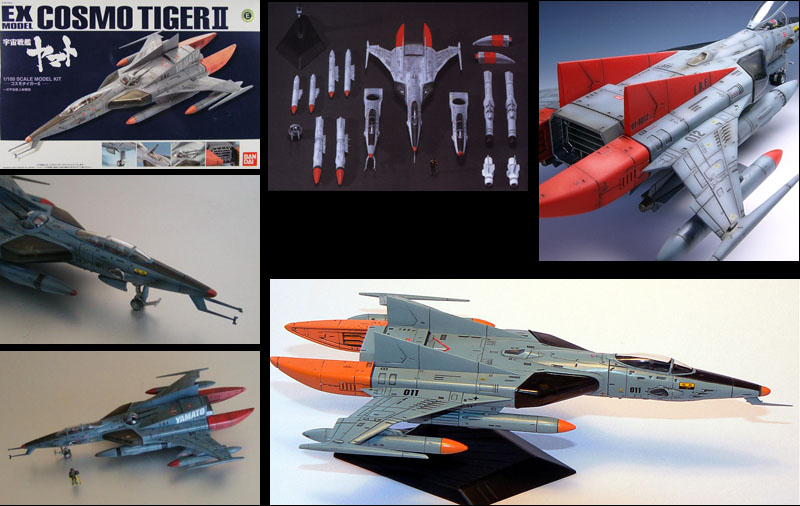 Every bit as detailed as its brethren, the Cosmo Tiger includes some bonus features. In addition to some unique tail decals, it comes with three different noses to match the three versions seen in Farewell to Yamato; the single-seat type, the three-seat gunner type, and the snub-nosed torpedo bomber (which would require a red paint job for accuracy). Bandai’s line of EX Models was accompanied by a reissue of many classic Yamato kits in early 2007. This resurgence of interest in Yamato was ignited by the approaching 30th anniversary of the first Yamato movie.

The true jewel in Bandai’s crown was a kit so special, so unprecedented, so magnificent in its execution, that it deserves an article of its own. Click on the link at the end of this page to see it.

As a nod to Space Battleship Yamato‘s 35th anniversary, Bandai reissued a large portion of their famous model kit line from the production years. For the first time since 1978, this included the rare multi-ship “Space Panorama” kits shown here.

With the approach of Yamato Resurrection‘s premiere, Bandai reissued the giant 1/350 scale Yamato in silver-coated plastic to represent the “Reflector Shield” effect from the finale of the first TV Series. See Bandai’s homepage for this version here.

When Resurrection rolled out in December 2009, two classic Bandai kits were reissued with new box art: the 1/700 scale Yamato and Andromeda models from 1978. 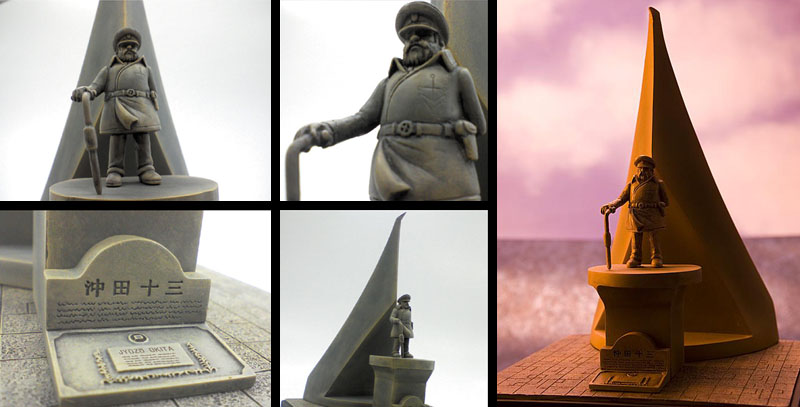 Japan’s Plex Company (formerly known as Popy) has released several sets of Yamato miniatures in their “Mechanical Collection” series, but this figurine of the Hero’s Hill monument was completely new. Standing almost 8″ tall and 6″ square at the base, even the plaque at Captain Okita’s feet is readable. 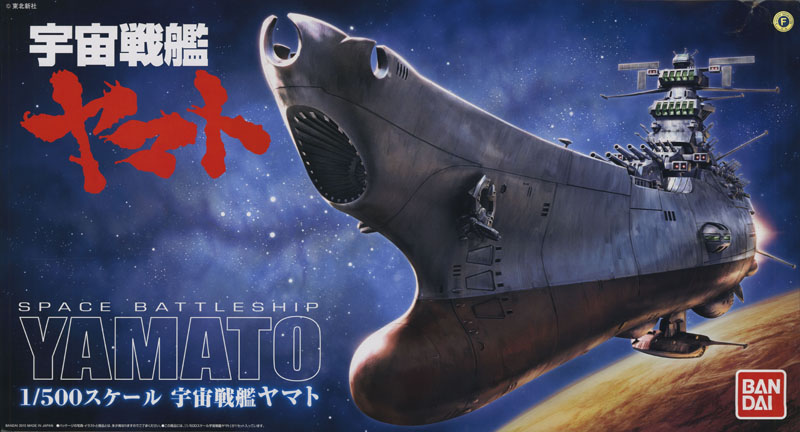 Bandai’s 1/500 kit from 1978 measured over 20 inches long. It took almost 20 years for a bigger one to topple it, the 1/350 kit from 2007. Bandai re-delivered with this new model, which corrected nearly all the shortcomings of the 1978 version and added some subtle new details of its own. 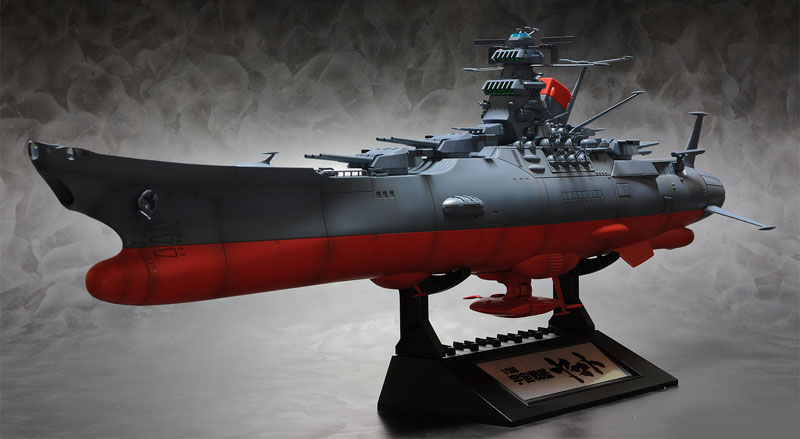 One thing that set this model apart from its predecessors was the color of its plastic, engineered for the closest possible match to the original animation colors. The kit even has a backstory that sets it apart from all the models that have been released thus far: it does NOT represent the ship from the original anime. This is how it appears in Yamato 2199. As such, it was the first piece of 2199 merchandise, even though this was not revealed at the time. 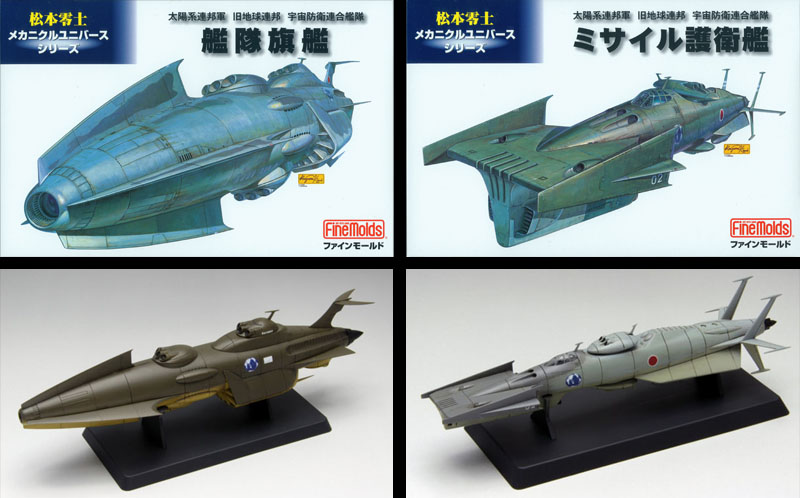 Finemolds turned many heads with these models, both of which were unmistakably familiar to Yamato fans, rebranded for the benefit of Mr. Leiji Matsumoto. Captain Okita’s flagship was simply renamed “Flagship” and Mamoru Kodai’s Yukikaze was renamed “Missile Ship.” Of course, this fooled no one, and Yamato fans were delighted to finally have larger kits of both vessels. Scaled at 1/500, they measure 7.2″ and 5.4″ respectively.

The famous Yamato mini-kits have been in production practically non-stop since they first appeared in 1979, boosting Bandai’s fortunes like nothing else before. From January ’79 to June ’81, thirty of them rolled out at the very affordable price of 100 yen each, which gave even youngsters the chance to build a collection. They were first brought together as a set in 2004 with each of their individual packages inside a single large box. This time the individual packages are gone, but there’s a very nice tradeoff for that.

The family now numbers 33. For the first time, three new kits have joined the lineup: Domel’s saucer (with a SMITE trigger), a Black Tiger, and the Cosmo Cleaner D. Close inspection reveals that this is not the same Cosmo Cleaner mini-kit that came with the 2001 Popynica Yamato toy. Bandai has not yet announced whether they will be sold separately.

Continue to part 11: The Crown Jewel

One thought on “Yamato Models by Bandai”