Journey Into Another Galaxy! The Star Blazers Animation Comics

When some of us reached the end of our first Star Blazers episode in 1979 (already knowing our lives had been changed forever inside the last half hour) we saw an exciting line in the end credits: Produced in the US by Claster Television Productions, a division of Hasbro Industries. We all knew what Hasbro was. Their name was on a lot of the toys we were beginning to outgrow, like G.I. Joe, Battlestar Galactica, Chutes and Ladders, Battleship, etc. The implication was immediate and obvious: there must be some Star Blazers toys in the works. Why else would a toy company get involved?

But time marched on and such toys failed to appear. In fact, Star Blazers merchandising of any kind stubbornly refused to show up in American stores. The only remedy was to scout high and low for Japanese imports, which were extremely rare in those days. By 1983, we had all but given up…and then a magic piece of paper floated in from somewhere with exactly the news we wanted to hear: 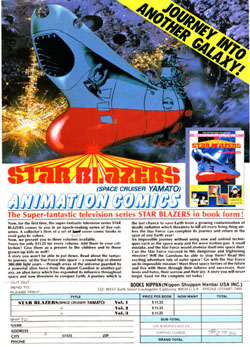 In the days before home video was commonplace, this was even better than Star Blazers toys; it was a chance to relive the series itself on a scene-by-scene basis. Moreover, it was proof that Star Blazers hadn’t been a mere dream. Someone with publishing power knew there was a void to be filled and had taken steps to do just that. Naturally, it could only have been Yoshinobu Nishizaki. 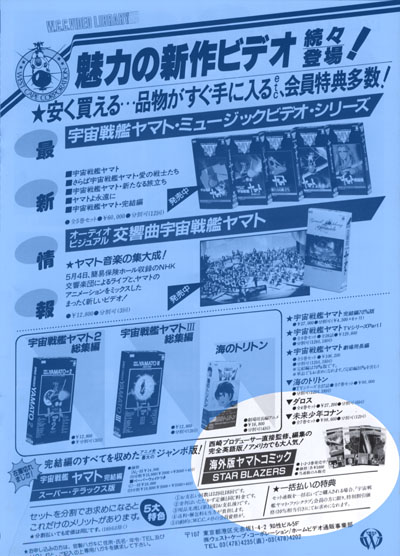 Most of us in-the-know had already heard of Books Nippan, the company who was selling these books in America. In the early 80s, they were THE source for anime books, LPs, and other rare treasures. But “W.C.C. Animation Comics” was a bit of a mystery. Only with the proper context could you work out that this stood for “West Cape Corporation,” the name of Nishizaki’s own company. (“Nishizaki” literally translates to “West Cape.”) What this all boiled down to was that Nishizaki had figured out a way of producing and distributing a product specifically to his American audience, with a little bit of blow-back into Japan, where the same books could be purchased through the Space Battleship Yamato Fan Club.

The credits inside the front cover of each volume revealed some more interesting tidbits. The visual layouts were done in Japan, presumably since that’s where all the photographic resources were to be found, and the technique for assembling anime comics had already been perfected. There was an English name credited for dialogue, however, one which was known to monster movie buffs. In the 1960s, William Ross founded a company in Tokyo called Frontier Enterprises, which specialized in the transformation of live-action SF and monster movies from Japanese to English. Frontier was responsible for the “localization” of such cult classics as Godzilla vs. the Sea Monster, Destroy all Monsters, Gamera vs. Monster X, Frankenstein Conquers the World, and War of the Gargantuas. Ross expanded his reach to anime in the 1970s with Mazinger Z and others.

Since only Ross himself is credited for the English dialogue in these books, it’s probable that Frontier Enterprises itself was not the contractor, but the connection is interesting from a historical perspective.

For a project that emerged from Nishizaki’s inner sanctum, it contained some unusual creative choices. The story was intact, but organized in a way that hadn’t been seen on TV, divided into 16 chapters rather than 26 episodes. There were numerous dialogue changes and even a few minor name changes (see below). Hand-lettered sound effects were already a staple of Japanese anime comics, but the sound effects in these books seemed a little different, chosen in anticipation of what American readers were thought to accept. The oddest choice was the puffy, multi-colored style of word balloons, which was unique even for Japan. Odds are it was either an invention of the layout artists, or it was meant to mimic the look of a children’s book. Either way, it contributes to the individuality of this project, which was the only way to relive Star Blazers unless you’d already taped it yourself or were prepared to wait another five years for its US home video debut.

Below are some of the more interesting aspects of the WCC animation comics. Clicking on the thumbnail will open a larger image.

A message from the producer, in English for the first time!

The strangest spelling of Wildstar ever seen. Probably the result of someone’s poor penmanship.

The bridge crew introduces themselves, in which we get a variant spelling of ‘Eager.’ It does make more sense, though.

Lysis’ Generals are named accurately, but in captions rather than dialogue. This was due to the stills having the names applied over the original animation cels and needing to be covered up. The solution for American TV was to slice out the captioned frames.

A small sample of some typical sound effects

Occasionally, new lines were thrown in at a whim. And they didn’t get any more whimsical than these.

As a welcome bonus, many pages were devoted to the inner workings of the Argo and other mecha, giving many fans their first look at the incredible design work that went into the anime.

Every volume of the series devoted its inside back cover to a promo for the next volume, so when volume 5 came out many of us went instantly for the back cover. Would The Comet Empire storyline follow this one? Alas, no. But even if these books did not go on past the first series, they still served up a full-course meal for every starving Star Blazers fan.