By Everyone, For Everyone
The Modern Renaissance of Yamato Toys

When reviewing the history of Space Battleship Yamato toys, you’ll find that they fall into two basic categories: B.D. (Before Drought) and A.D. (After Drought). The “drought,” such as it was, began in approximately 1981 when Popy closed out their Yamato III toy line, and ended in 1998 and ’99 when Mimuko and Banpresto flung open the doors to a whole new generation. Since then, the steady avalanche of new toys has surpassed the entire B.D. output many times over.

What explains this difference? Production methods and materials, for one thing. Easier distribution, for another. Open access to data and technology means the business of making and selling toys is no longer the exclusive domain of multi-million dollar corporations. The other ingredient we have now that didn’t exist then is the Yamatolegacy, a steady callout to loyal fans whose devotion and respect only deepens as the passing years make it increasingly obvious that Yamato was one of a kind. Combine that with skill and discipline, and it should come as no surprise that today’s Yamato toys not only outnumber the originals, they also show greater variety and much higher quality.

Before the drought, Yamato toys were made by tradesmen who didn’t know what Yamato would become. Now they’re made by Otaku who are driven to pay homage, to whom a great product is more important than great profit. That’s a big difference that you can better appreciate when you see the results… 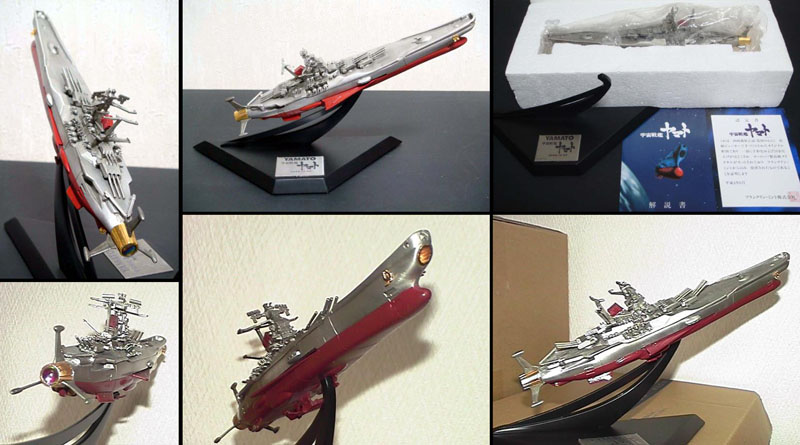 Yes, 1989 landed pretty close to the middle of the toy drought, but a pewter statue isn’t exactly a toy. A limited number of these were made by the Japanese branch of the Franklin Mint. The wave-motion gun and rear engine nozzle were gold plated and the engine port itself was glass. It was also one of the last Yamatos to be sculpted with a flat bottom, a common feature until the revival got seriously underway ten years later. So while this one doesn’t qualify as a toy, it does say something about the prestige Yamato had begun to command as the years progressed.

The first sign of an ending to the drought came from Mimuko in 1998 and the renaissance was begun in style by Banpresto and Liberty Planet in 1999. Their stories are just a click away.

Small manufacturers like Time Warp were born out of the “garage kit” revolution of the 1980s and 90s. Driven by fiercely devoted fans working mainly out of their homes (or garages), it was a true proletariat that made the products they themselves wanted to buy. Fortunately, there were enough of them to fill up semi-annual hobby shows that have only gotten bigger over time. Such companies and products can exist thanks to a mutual understanding with licensors that they limit their business to trade shows so it does not impede upon the mainstream marketplace. That being said, the amount of money that trades hands at every Japanese hobby show is enormous.

Time Warp’s Costume Kits were actually modification parts for a pre-existing action figure from Bandai, the insanely poseable 1/6 scale Kankichi Ryotsu (above left) from an anime police-comedy series called Kochikame. The parts included clothing, props, and heads that could transform the figure into either Dessler or Captain Okita, depending on your taste. Click here to see more pictures of the insanely poseable Kankichi Ryotsu action figure. 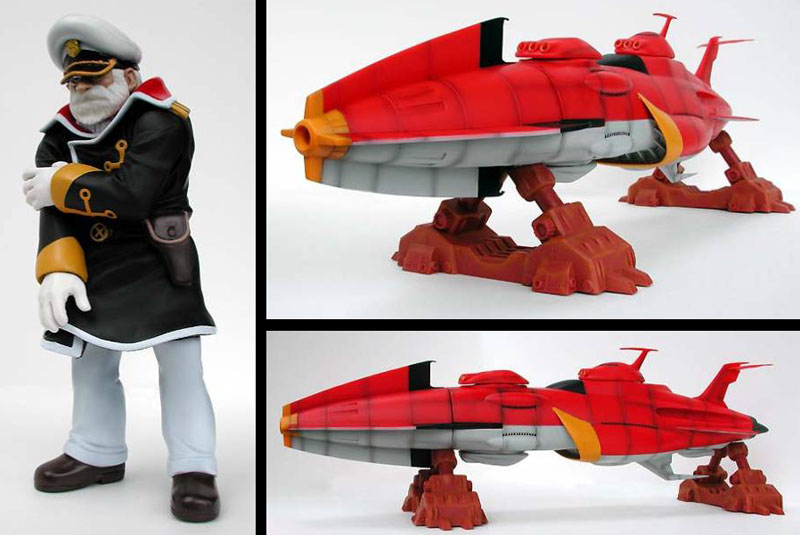 Captain Okita was also the focal point of another small company with “Time” in their name. Both products were released together for a limited time. This was the largest and best-looking Okita Battleship anyone had ever made, and the “wounded Okita” figure was meant to evoke the same Episode 1 timeframe in which the ship was seen.

One way to keep a license affordable is to avoid sculpting specific characters and instead cast generic ones from pre-existing molds. That would explain the approach RZM took when it released an unnamed Yamato crewman and Gamilas officer in February and March 2003 respectively. They were both in 1/6 scale (about 12″ tall) and had the added advantage of being available in multiple costume variants depending on your preference. Visit the RZM website here. 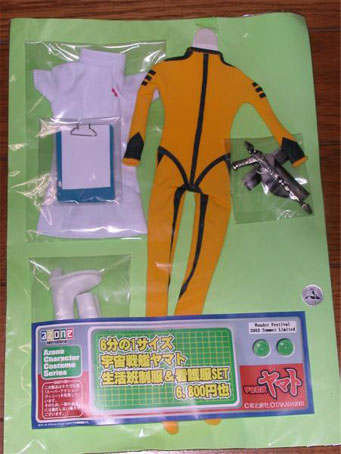 Made for and sold only at Japan’s summer ’03 Wonder Festival, Yuki’s (Nova’s) crew and nurse uniform could fit onto premade character dolls from the Takara Corporation, just as Time Warp’s Okita costume was retrofitted to the Kankichi Ryotsu doll.

The years 2003 to 2005 saw more new products from Sunkus, Nubel International, 7-11, and Zero Goods Universe. Their products can be seen by clicking on those names. 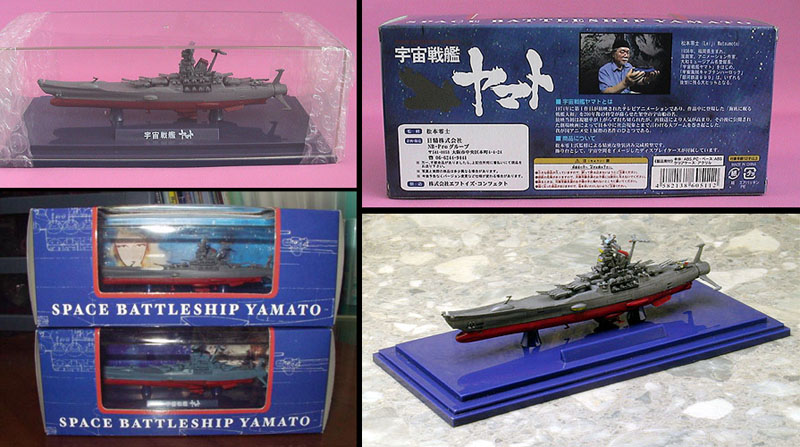 A museum dedicated to the IJN Battleship Yamato opened April, 2005 in Kure Japan, the centerpiece of which was a massive 1/10 scale model of the vessel. Over the next year, ancillary exhibits featuring Space Battleship Yamato were added, and a few Yamato products appeared in the museum gift shop. In consultation with Leiji Matsumoto, F Toys released this handsome 5.1″ ABS plastic Yamato in two color schemes: an A type (grey/red) and a B type (blue/red). Above is the commercial version. Below is the same product with custom packaging sold only in the museum shop.

Read a firsthand account of the Yamato Museum here.

One of the most endearing traits of toys made by dedicated fans is that they often treat obscure subjects with the same care and reverence as the popular ones. Such was the case with the Balanodon (Balanosaurus) from TV episode 17. It came with a tiny metal control ship and measured almost 18″ long. By no coincidence whatsoever, it was perfectly scaled to Bandai’s 1/350 scale Yamato model. 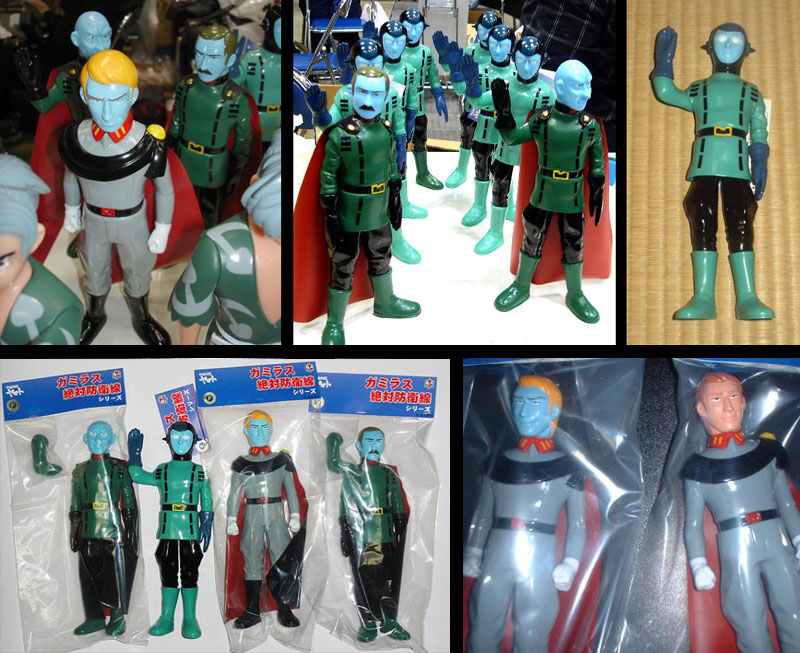 Sold exclusively at the 2007 Winter Wonderfest, these soft vinyl figures put a comedic spin on Dessler and other Gamilons from the first TV series. Paying heed to the infamous color shift in episode 11, Denboku was thoughtful enough to offer two versions of Dessler for the completists. First photo in this set courtesy Matt Alt.

Though the manufacturer’s name is not known, only an Otaku could think up this strange little 4″ contraption, in which a pull of the bow cap strikes the flint that sets off a wave-motion lighter. It’s just more proof that as long as everyone has access to the means of production, the future of Yamato toys and novelties will only get more unpredictable…and more fun!