The buildup in May exploded in June with the arrival of Yamato 2202 Chapter 2: Launch Chapter on the 24th. It kicked off another episode in the life of the saga itself, this time stretching up to three weeks in some theaters and bringing with it another wave of news and merchandising to expand the legend. It was a big month full of big news, so let’s get started! 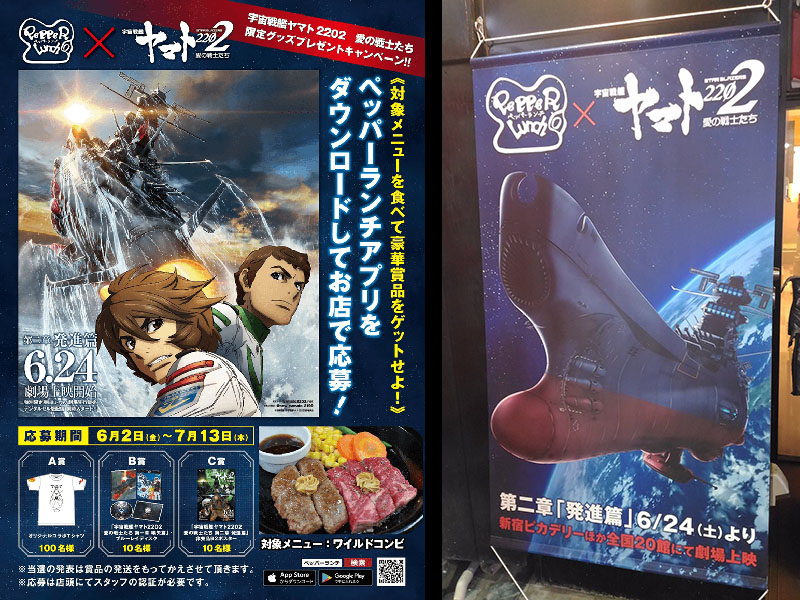 Pepper Lunch is one of the many specialty restaurants in Japan, and this particular chain launched a 2202 collaboration campaign that lasted through July 13. Customers who registered via smartphone app could win T-shirts, Chapter 1 blu-rays, or Chapter 2 promo posters.

The Pepper Lunch store in Shinjuku put up custom Yamato décor and was visited by many a Twitter user. See photos here. 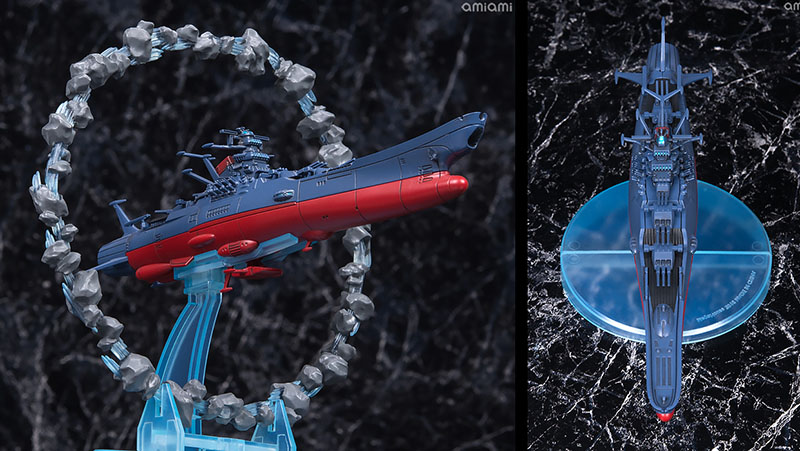 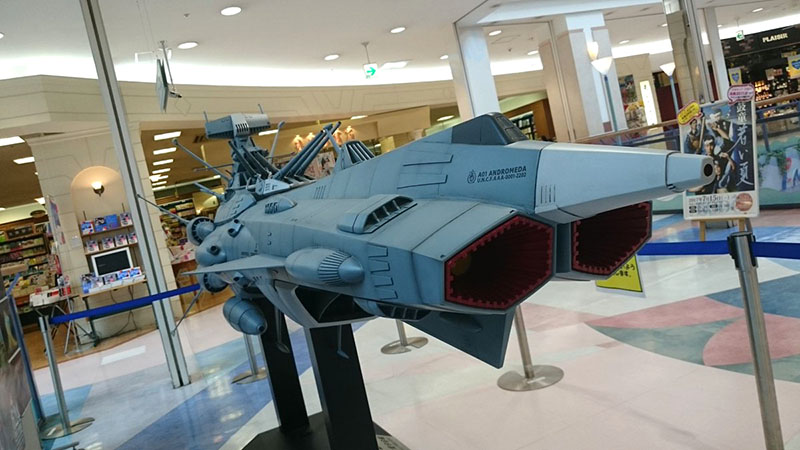 The huge Andromeda model that made its debut at the Shizuoka Hobby Show in May found itself in a new location to help promote the coming of Chapter 2. This time it was at a mall containing a MOVIX theater in Miyoshi through June 22.

The next model kit release from Bandai is slated to be the Andromeda variant Aldebaran, essentially the same kit in a different color. Preorders opened up on this day, which generated some new photos. 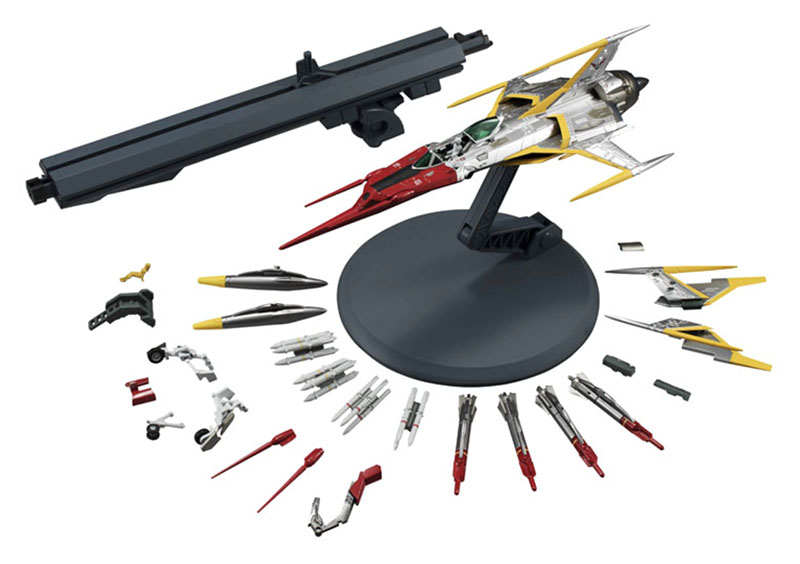 Megahouse’s Cosmo Zero is now scheduled for September release, and a description of it finally emerged when the preorder window opened. The full name is “Variable Hig-Spec Type 52 Space Fighter Cosmo Zero.” The total length is 20cm (just short of 8 inches) with die cast metal parts. Optional equipment can attach to the wings, and replacement parts make it possible to reproduce the tucked-in version for hangar storage. The canopy opens and closes, a tiny Yuki Mori can sit on the ramp, and it can be displayed either with landing gear down, on a standard base, or on a catapult. Detail-up stickers are also provided.

This is the first fightercraft to make the leap into Megahouse’s Cosmo Fleet Special line, and all the extra production easily explains the high price tag, which approaches $200 USD. 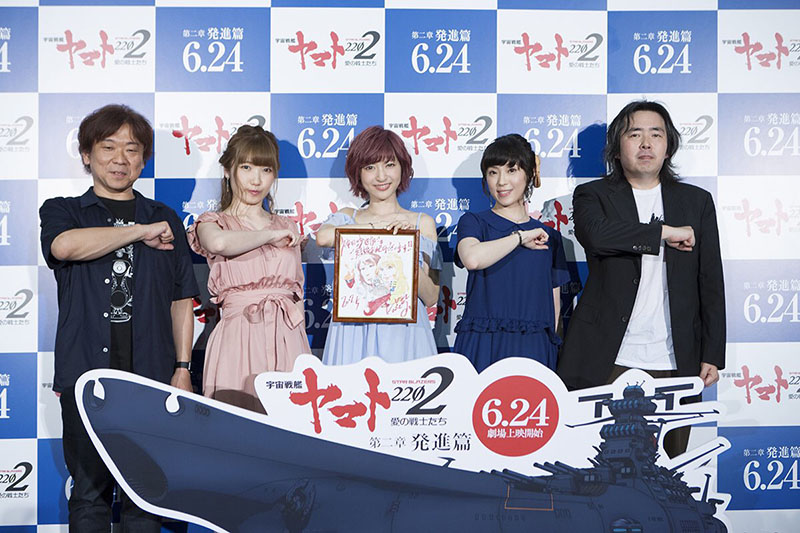 The first fans to see Yamato 2202 Chapter 2 did so on the evening of June 7 at the Shinjuku Piccadilly theater in Tokyo. On hand were some very special guests: Writer Harutoshi Fukui, Director Nobuyoshi Habara, and voice actors Sayaka Kanda (Teresa), Eriko Nakamura (Mikage Kiryu) and Aya Uchida (Yuria Misaki). Their stage greeting was reported by no less than 11 online news sources. The following text is an amalgam of their content.

Under the theme of “Yamato Women’s Gathering” the female voice actors took the stage to discuss the parts of Yamato that women can enjoy. The first question was about their favorite characters.

Uchida: Shinya Ito! There are various ways where he seems like a bad person, but he has a strong sense of justice and his actions lead to a painful last scene. (audience went quiet) But the real reason I like him is because I like his face. (Laughter)

Nakamura: It’s really hard to narrow it down to one person, and I get distracted when I’m late for things. (laughter) It must be Hiroki Shinohara. He has an air that calms a place down when he appears, and a fighting man who is very faithful in his duties has great sex appeal.

Fukui: In the feature film [Ark of the Stars], you got along with Sho Sawamura.

Nakamura: I don’t recognize Sawamura’s name. It’s gotten away from me. (Laughs) 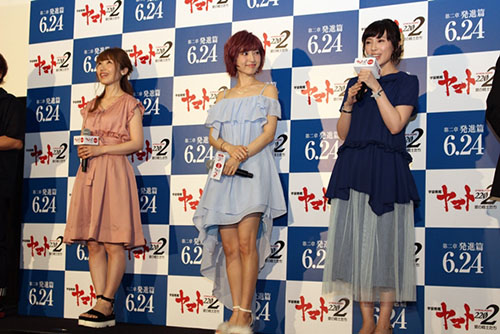 The moderator, Chiaki Matsuzawa, observed that neither Kodai nor Shima had come up yet. This made Director Habara grumble, “no, that’s fine.” (laughter)

Kanda: I feel like I have to choose Teresa. I always wish for peace, and I’d like to become an adult woman with a mysterious nature like her. It’s timeless.

Kanda: Actually, I don’t even know about Teresa. What’s going to happen?

Habara: I can’t tell you.

What scene does the female cast recommend?

Nakamura: The water splash drawn by Director Habara when Yamato rises up from under the ocean. It was from the director’s viewpoint, but I felt the passion of an animator in that.

She seemed to have a large number of scenes and could even cite the storyboard number. Uchida talked passionately about Shiro Sanada

Uchida: Sanada has the feeling of being calm and reliable. And he’s really cool this time! My Sanada love welled up like the water splash of Yamato!

Nakamura: With Aya-chan supporting him, it means he won’t die, right?
(laughter) 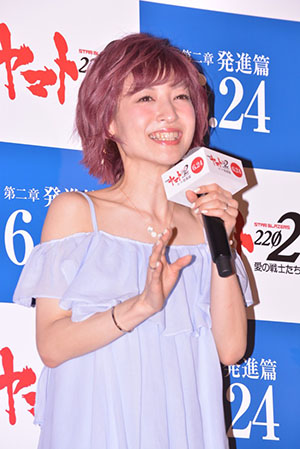 When Kanda’s turn came, there was a surprise announcement that she performed the end theme of Chapter 2, Mirror of the Moon (applause)

Kanda: It’s a mysterious, warm song. It’s full of the feelings I want to sing about in the future. When singing as Teresa, I thought I should sing in a big scale that I couldn’t even imagine. Even if it could be called a normal character song, she is a goddess, so I wondered how to keep it behind a veil.

Habara: Her singing voice has a feeling of transparency that the staff raved about. It’s a song that touches your heart. We were greatly inspired when we made the visuals.

Kanda: I was doing trial and error to get a sense of the mysterious Teresa. Watching those images, I became convinced that I could sing properly as her.

to celebrate Ms. Kanda’s recent marriage (a month earlier to actor Mitsuru Murata), a surprise present was given to her, a color portrait of the newlyweds in the style of Yamato 2202’s favorite couple by character designer Nobuteru Yuuki. She was flabbergasted and smiled widely when Habara handed it to her. 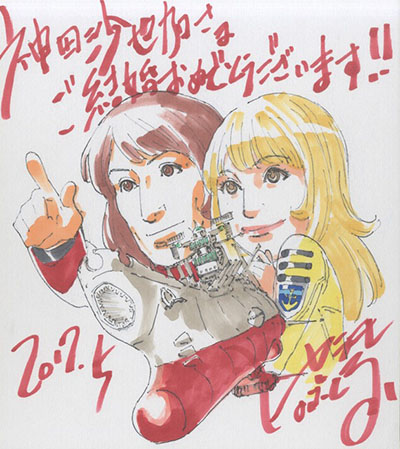 Habara: Nobuteru Yuuki drew it with all his heart.

She was unable to hide her excitement.

Kanda: When I got married, my husband’s hair style was just like this! What a coincidence! This is great! I will treasure this. I’ll make it a family heirloom.

The story was shared about how they had a hard time keeping the secret from her in the dressing room backstage.

Uchida: When we met in the elevator I wanted to say “congratulations,” but if I said anything it might give something away…but I wanted to celebrate as soon as possible.

Fukui: Thanks to you, I was able to put a good feeling into Chapter 1. Yamato should have had more female fans in the old days. That’s why I thought it was better to appeal to more female fans. Like the original, Kodai and Yuki will run into a crisis before marriage…marriage is hard work, isn’t it?

Fukui: It’s hard, but it’s worth it. I think you embody that more than anyone. (applause)

Kanda said thank you and bowed.

Fukui: I’d like to speak to the three women on the team. It’s obvious that Teresa will appear in the future. Something meaningful happens, so I want you to trust us.

After a few more cryptic comments, he said it was “too much,” and “I think it will be best just to watch the movie. So please look forward to it.”

Invited by the enigmatic young Garmillas man Keyman, Kodai meets with Ambassador Varel at the Garmillas embassy on the surface of the moon and learns the story of Telezart and Teresa. Kodai is informed of the negative legacy inherited when the Cosmo Reverse System was brought to Earth. Once again, Kodai is angered by the policy of the Earth government. He petitions the highest level of the defense forces to respond to Teresa’s message, but is not able to get permission for Yamato’s launch…

Yamato’s crew, who received that message, gathers in front of Space Battleship Yamato at the undersea dock. Kodai is determined to start on the voyage with a dogma that can be called “treason.” Now Yamato starts again. The state-of-the art battleship Andromeda awaits.

Meanwhile, a Gatlantis fleet that has invaded the solar system draws closer to the eleventh planet… 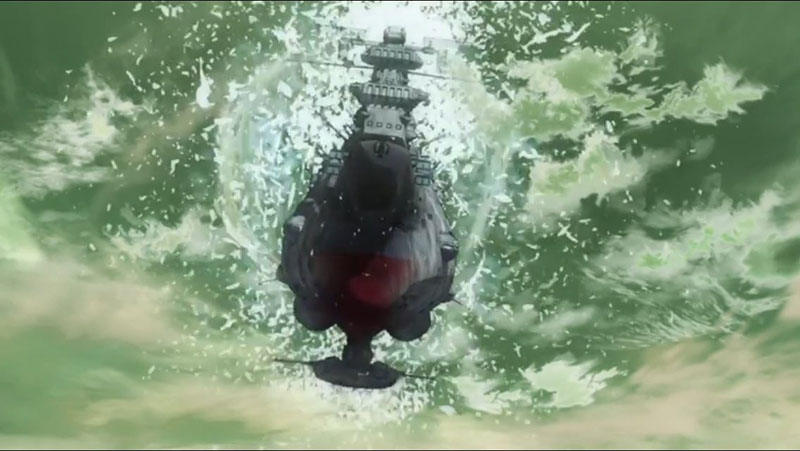 The final 90-second trailer for Chapter 2 was a masterpiece of dramatic scenes and music choices that should send chills down the spine of any loyal fan. A sample of Sayaka Kanda’s new ending theme Mirror of the Moon was also heard. 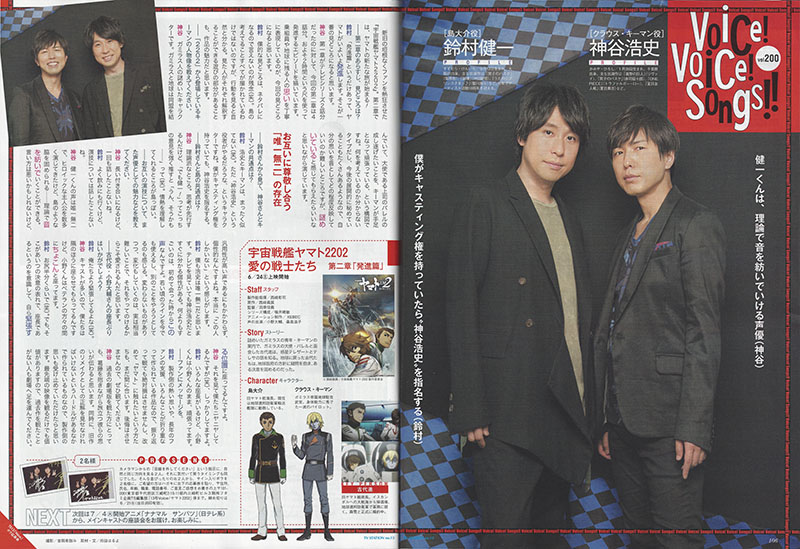 This issue of TV Station sounded the starting gun on the print-media promotional campaign for Chapter 2 with staff and cast members in a whole new wave of interviews to rival that of Chapter 1. This one put actors Hiroshi Kamiya (Keyman) and Kenichi Suzumura (Shima) together for the first time. 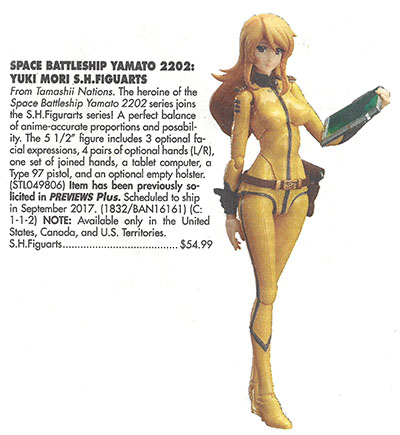 There was a tidbit of Yamato news in the English speaking world this month: two new products appeared in Previews, the catalog of comics distributor Diamond. This time, they were the 1/1000 Dreadnought model and S.H. Figuarts Yuki Mori action figure. Both were scheduled to ship in August. 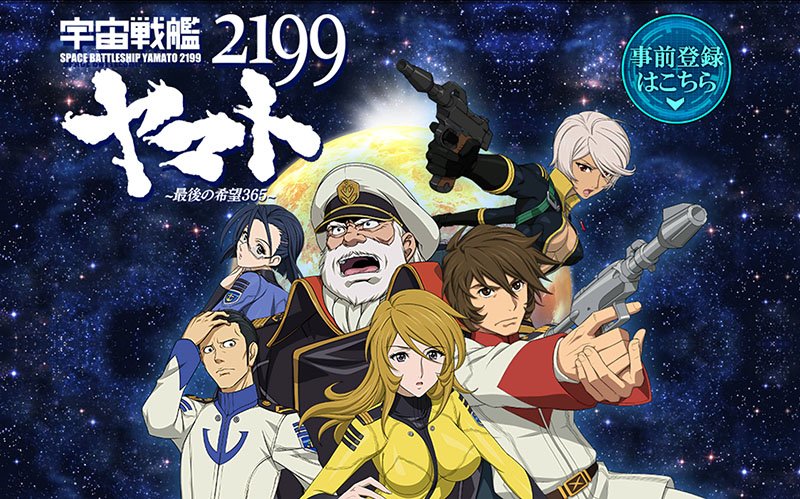 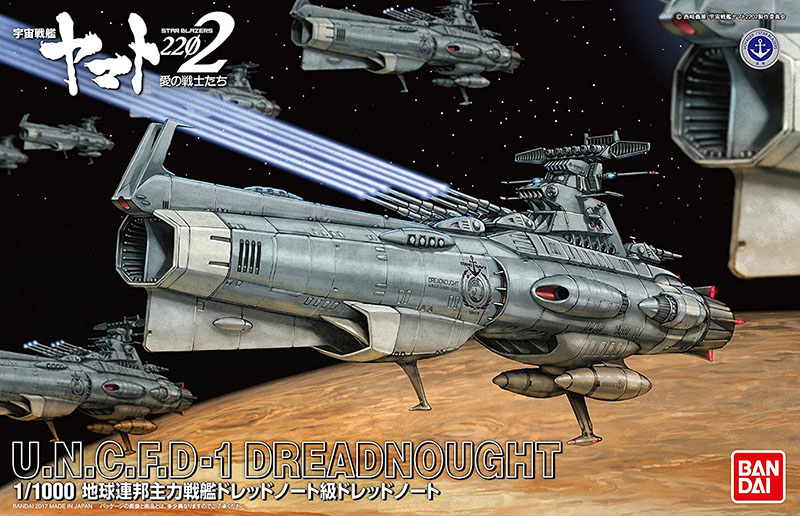 Formerly known simply as the Earth Defense Forces “Main Battleship,” the new version of this vessel is called the UNCFD-1 Dreadnought. The model kit was announced for release on June 24 with this box art by Kia Asamiya. 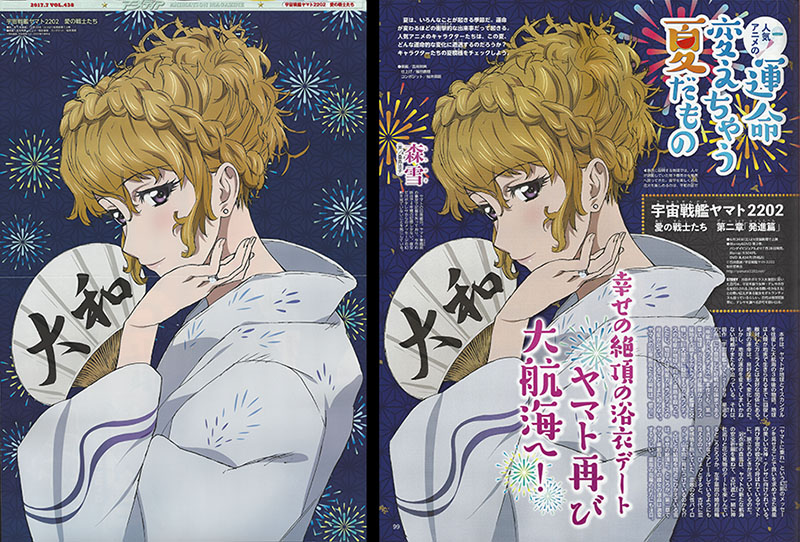 Animedia celebrated the arrival of summer with original character art featuring popular anime characters in summer festival garb. Nestled among a set of foldout posters was this new image of Yuki Mori (which was also used for a single-page writeup). 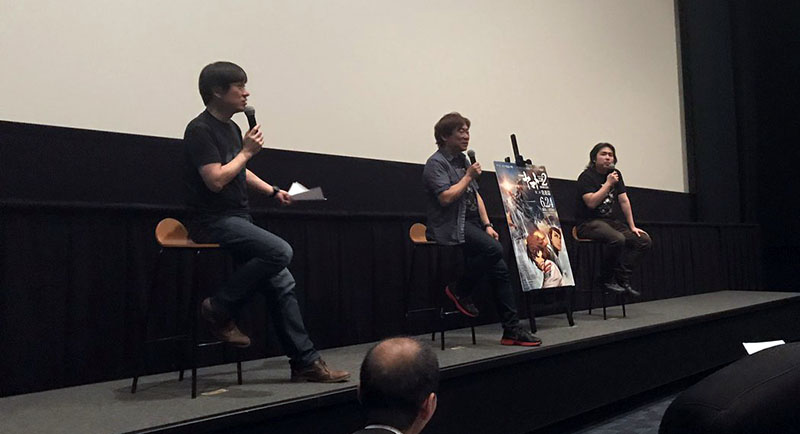 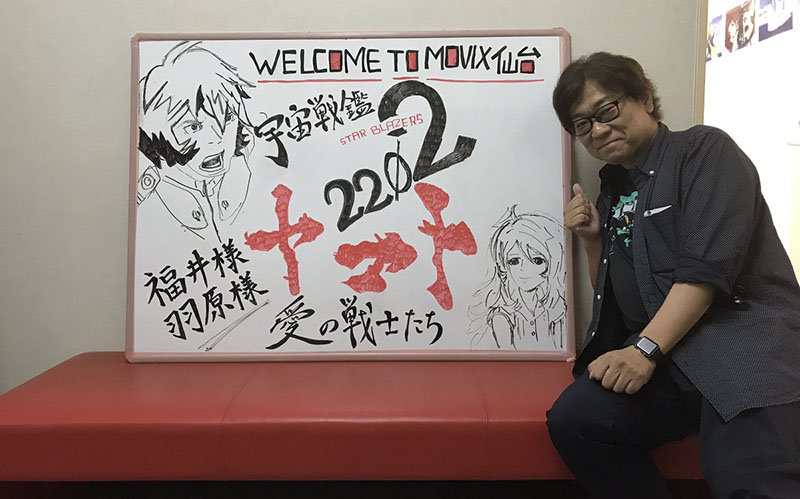 Nobuyoshi Habara backstage at a MOVIX theater with a welcome image created by theater staff.