Elsewhere on this website, we’ve presented a history of the entire Star Blazers galaxy as conceived by a group of American fans & writers for use as a continuity reference back in the days when Voyager Entertainment published the Star Blazers comic magazine. Now, as an exercise in comparison, we present the same subject from the Japanese point of view, translated from the first This is Animation special on the Yamato series, published in January 1983 (cover shown at left).

During its heyday in the 1970s and 80s, Space Battleship Yamato ignited and inspired the creative impulses of its fans much the same way Star Wars and Star Trek did in English-speaking countries. The appetite for Yamato was insatiable, and as the years progressed, speculation ran high about the backstories of the various characters and races that appeared in the movies and TV shows. Many books were published to feed this appetite, including two “This is Animation” specials published by Shogakukan in 1983. What set these books apart were the many pages devoted to those very backstories the fans had clamored for. 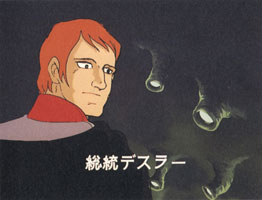 Dessler’s first appearance in Series 1,
before it was decided to make him blue

In addition to a comprehensive study of the entire Yamato universe, particular attention was paid to the single most controversial character in the Yamato pantheon: Dessler, leader of the Gamilas. From his beginnings as a standard, run-of-the-mill anime despot to the inscrutable, multi-faceted schemer he would become in later stories, no character went through a greater evolution or fired up more fan interest than Dessler. It was all later magnified by the unusual and highly effective voice-acting choices made by Eddie Allen for Dessler’s Star Blazers incarnation, Leader Desslok.

This material was written by Tsutomu Kadoi, based on a concept by Yoshinobu Nishizaki. To sum it up, if you were dying to know what the cool blue guy was up to while the animation cameras were pointed elsewhere, this is what you’ve been waiting for. 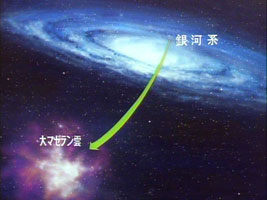 The Grand Voyage from the Milky Way to
the Large Magellanic Cloud.

In the early ages of the Milky Way galaxy, there existed a great and prosperous race called the Galmans. One particular sect of this race was an energetic, high-spirited people who lived up to the Galmans’ reputation as The Grand Voyagers. They were accomplished spacefarers whose instinct drove them outward, even beyond the edge of the Milky Way.

Intending to form a colony, they emigrated to a planet called Gamilas in the Large Magellanic Cloud. Gamilas was one of a pair of twin planets in the Sanzar Solar System. The other was called Iscandar. The peaceful and philanthropic Iscandarians had emigrated to the Sanzar System long before. They welcomed their new neighbors, established peaceful relations, and freely exchanged their culture and technology. They had a strong influence on Gamilas’ development, but could not quiet the Gamilas peoples’ nature for aggressive expansionism, for they were still the descendants of the Grand Voyagers. Gamilas had absorbed Iscandar’s technology, but not its spirituality. 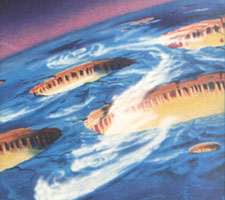 The surface of Planet Gamilas

During its first period of expansion, the Gamilas sent colonial fleets to the Small Magellanic Cloud. In those days, Gamilas and Iscandar were still healthy, vital planets. The Gamilas appreciated the beauty of their homeworld, which not only nurtured them but was also rich in mineral and other natural resources, even moreso than Iscandar.

This, and the exploitation of other worlds, brought the Gamilas great wealth and prosperity, and in time the legacy of their original home passed into myth. But it would not last forever. The environment of planet Gamilas went into rapid decline owing to an increase in volcanic activity. It soon became apparent that their world was becoming unstable, and they would have to abandon it if they intended to survive. 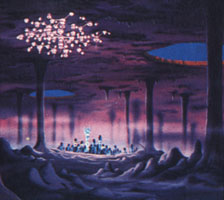 Gamilas cities were first built on
the ground, then expanded to the
natural ceiling structure.

The Gamilas expanded their territory mainly through military conquest, which they considered to be the natural method for spacefarers. In this way, they were not unlike Earth’s early navies during the Age of Discovery, when explorers conquered and assimilated “lesser” civilizations as a matter of course. 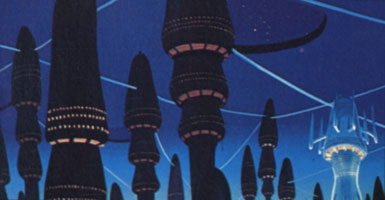 A closer look at the Royal City.
The Imperial Tower is seen at far right.

Over time, the Gamilas developed into a highly militarized culture. Not all Gamilas were soldiers, but the military was the foundation of their society. This would later provide their leader, Dessler, with everything he needed for his greatest achievement.

Entrance to the Imperial
Tower. The Gamilas
emblem is visible above.

The Rise of Dessler

Though his early history is unclear, Dessler’s natural leadership abilities indicate a high level of education and battlefield experience, and possibly even a noble lineage. He rose through the ranks and came to master the art of military aggression. He became supreme leader when it was learned that planet Gamilas would not support his people for long, and his leadership was crucial to their survival. 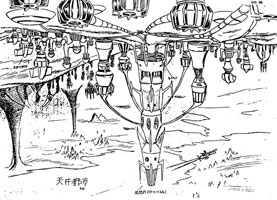 Dessler’s command cruiser is
positioned in the Upper Royal City.

Faced with the crisis of environmental collapse, many Gamilas talked of finding another home, but it was Dessler who made the plan concrete. Although the Gamilas had established a large intergalactic empire between the Megallanic Clouds, none of the worlds they had conquered were adequate for emigration. Dessler ordered a comprehensive search for planets outside his sphere of influence and soon found one in the Milky Way Galaxy: Planet Earth. Still a mighty military power, the Gamilas were well-prepared for another conquest. 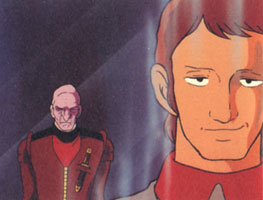 Dessler himself created the plan for Earth’s takeover, and his people came to see him as the very hand of God. Earth was their new hope, and it united all the hearts and minds of the Gamilas people despite Iscandar’s repeated requests not to attack it. Dessler began to unify the entire Gamilas infrastructure with careful buildup of supply lines, military expansion in the Small Magellanic Cloud, and strategic alliances with other planets, such as Beemera. All these resources and more would be needed to move such a massive empire across intergalactic space. The success of this undertaking would be the culmination of Dessler’s career as Supreme Leader of Gamilas. 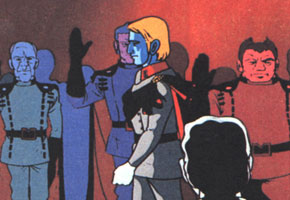 The scene in which Dessler’s skintone
mysteriously changes (Episode 11).

The War with Earth

In Earth year 2190, war was declared upon humanity, with the very survival of the Gamilas race at stake. All of Dessler’s tremendous resources were employed, and the probability of failure was less than 0.1%. By 2199, Earth’s fate hung by a thread. The Gamilas’ deadly planet bombs had destroyed all of Earth’s cities and spread radioactive poisons across the entire globe. Dessler believed he had succeeded, and the road to Earth was open. He merely had to wait for humanity to die off, then purge the planet of radiation. 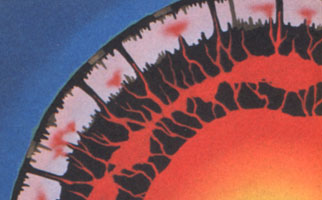 Volcanic activity begins to dissolve
Gamilas from the inside out.

Unfortunately for Dessler, there was one unforeseen factor in his plan: Queen Starsha of Planet Iscandar. When it became obvious that Gamilas would not cease its aggression, Queen Starsha and her sister Sasha, the last two living Iscandarians, gave the people of Earth the edge they needed: Wave-Motion Engine technology. With this, the playing field was made level and all of Dessler’s elaborate plans began to unravel with the appearance of the Space Battleship Yamato. 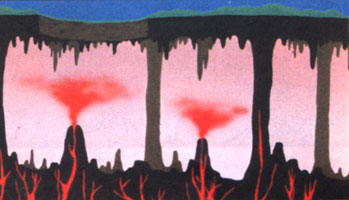 Compelled by Starsha, Yamato‘s crew launched into deep space, bound for the Large Magellanic Cloud to retrieve the Cosmo Cleaner D machine, which would cleanse the Earth of its poisons and restore humanity to its rightful place. This move was entirely unexpected by Dessler or any of his people. Their militarized culture was their fatal flaw. The Gamilas military was now completely dependant on its technology, which did not prepare them to deal with the Yamato. Motivated by sheer courage and spirit, Yamato‘s crew defeated one Gamilas plot after another, driving ever onward toward their goal. 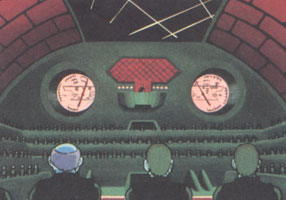 A session of the Gamilas War Council.

Confronted by such an unbeatable foe, an ordinary man would sue for peace or end hostilities against the Earth. But Dessler was not an ordinary man, and too little time remained to find another suitable home for his people. He had no choice but to fight on, and all the tools he needed were at his disposal.