It should come as no surprise that the first TV series leads the pack for the number of times it has been released. What may be a surprise, however, is that it could be seen at home before the advent of affordable home video. After the smash success of the Yamato feature film in the summer of 1977, book publisher Asahi Sonorama became the very first source for Yamato anime-on-demand when they released three 8mm film reels in November. Each included sound and color with a running time of 10-12 minutes. This was probably the most expensive way to see Yamato, given that each reel originally cost 12,500 yen. That comes to about $10 per minute in today’s dollars. 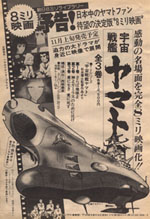 Reel 1, titled “Goodbye Earth” was a compilation of scenes from episodes 1-10, concluding with the crew’s sad farewells to their families. Reel 2, “God, weep for the Gamilas,” went all the way up to the end of episode 24, which shares the same title. Reel 3, imaginatively titled “Living and Dying for Love,” was a bit more generous, spending all its time on the final two episodes. The title elegantly refers to the choices made by Starsha and Yuki (Nova). Production credits indicate that the film was manufactured by Herald Enterprise. Shown at right is a magazine ad for the 8mm trilogy (click to enlarge).

The first actual Yamato home videos arrived in 1983, all of which were movies. It took about another year for this complete rollout of Series 1 to happen. It was not the first time TV episodes could be purchased on tape (Urusei Yatsura, Macross, and Future Boy Conan were among those already available), but this may have been the first time a complete end-to-end TV series was made available all at one time. Each tape in this set included only one opening and closing title. The individual episodes were divided only by video title cards that were not part of the TV broadcasts. 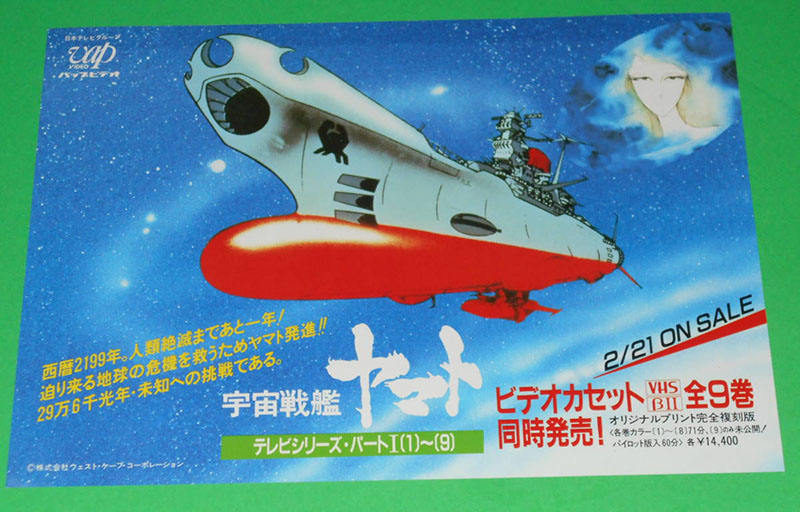 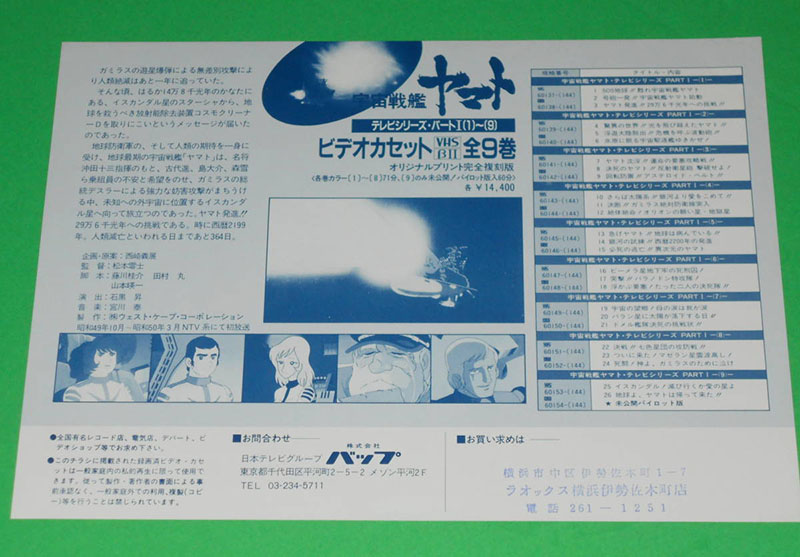 Tapes 1-8 contained three episodes apiece, and the final tape included a very rare bonus item: the first-ever release of the 10-minute Yamato Pilot Film made in 1974 to sell the series. It was preceded by an on-camera introduction from Yoshinobu Nishizaki (below) and its entire “temp” score was replaced by genuine Miyagawa music.

Over the next five years, the home video revolution kicked into high gear and VHD became the first official calamity of the format wars. During this time, Yoshinobu Nishizaki parlayed his Yamato fortune into a new company called JAVN (Japan Audio Visual Network) that would produce and distribute its own videos in addition to many others. Quite properly, JAVN became the next source for the first TV series. 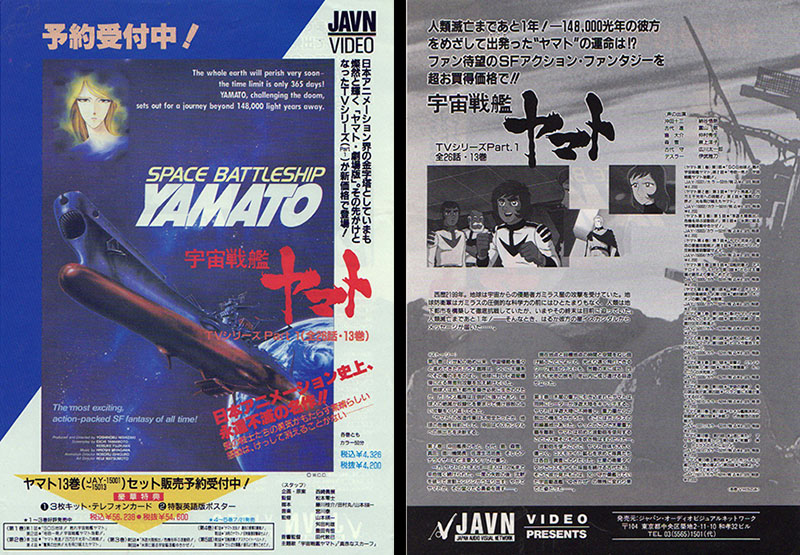 This release was more ambitious, spreading the series across 13 volumes of two episodes apiece with their own opening and ending credits intact, which preserved each variant version as originally broadcast. Instead of being available all at one time, they were spread out over the year and could be purchased via subscription. Tapes 1-3 were released in May, 4 & 5 in July, 6-9 in September and 10-13 in November. (Advertising shown below.) 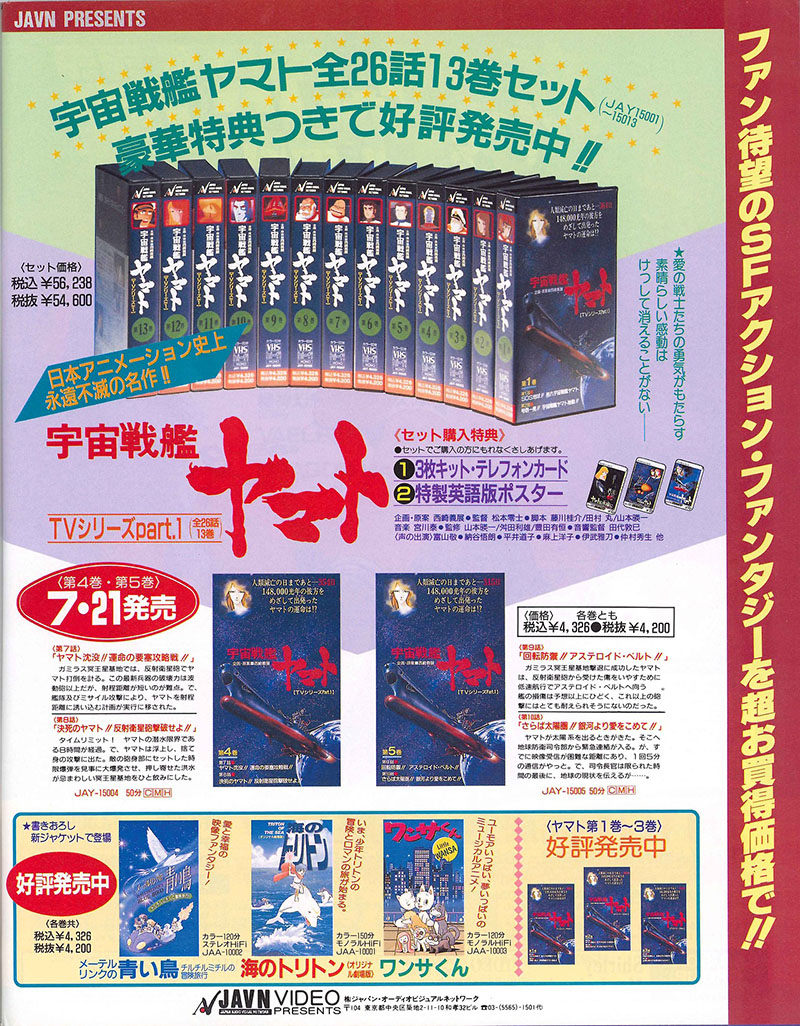 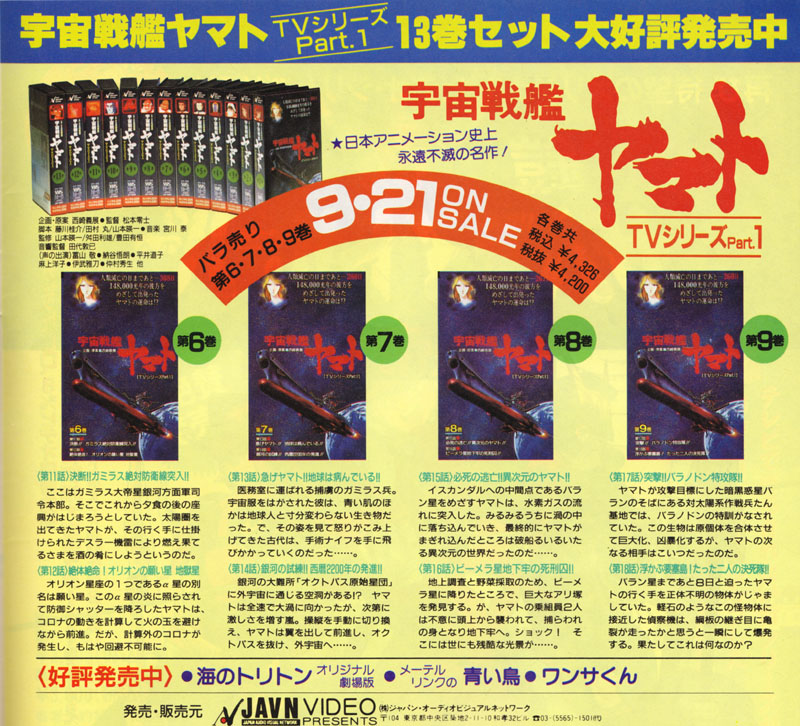 Anyone who was patient enough could buy all 13 volumes in this box set on December 25. Observant readers will notice that the box window is slightly off-center with a bit more room on the left side. This was to accommodate a special bonus item, an exclusive double-disc music CD (above right). Disc 1 was a reprint of the Series 1 BGM collection, and Disc 2 was a unique “Best Selection” of themes edited into a continuous 32-minute medley. All were sampled from commercially-available recordings, but this presentation was never reissued, making it one of the rarest Yamato music releases.

Oddly, these tapes were released again in 1990 with slightly altered packaging (shown at right). The JAVN manufacturing credits were replaced by Nishizaki’s West Cape Corporation with all other factors (including price) unaltered. One possible explanation for this was that since Bandai was soon to release its own version of Series 1, changing the ownership of these tapes allowed Nishizaki to continue selling them until stock ran out. 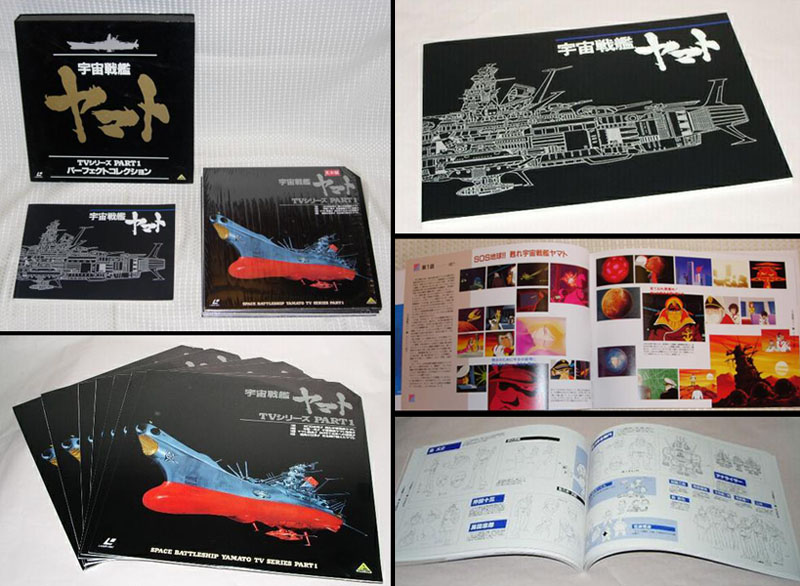 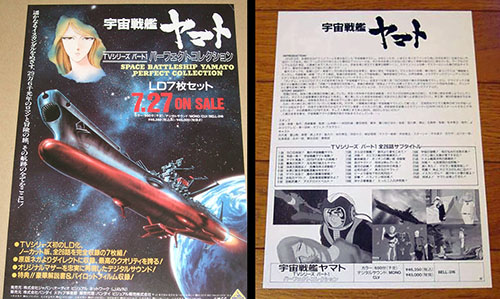 Bandai took over in 1990, releasing the third VHS set of Series 1 and a magnificent, eye-popping LD box set. This set credited West Cape Corporation as the owner and JAVN as the manufacturer/distributor, but the box sports an Emotion logo–the name of Bandai’s home video division.

The name of the game with this set was high production value and substantial bonus features. Each of the discs contained music tracks which added up to just under 73 minutes. Many of these tracks had never been released before, and would not be released again until the Eternal Edition CDs appeared ten years later. (For those keeping score, the LD tracks run 40 seconds longer than the Eternal Edition disc for Series 1.)

Also included was the Yamato pilot film with its original temp score restored, and a gorgeous 100-page guidebook that included episode guides, model sheets, broadcast data, new illustrations, and a complete reproduction of the presentation pamphlet that accompanied the pilot film in the pitch for TV networks. Production of the book was credited to Studio Hard, a well-regarded design house for anime publications.

Shown above right: promo flyer for the LD box.

With Yamato‘s 25th anniversary approaching, Emotion threw all its muscle into a complete reissue of the entire video catalog in new packaging in 1998. Series 1 was graced with entirely new sleeve art by the prolific Toshihiro Kawamoto, doing an uncanny imitation of Leiji Matsumoto’s drawing style. The tapes and discs themselves were duplicates of the 1990 releases with the bonus features left out and all seven laserdiscs available individually rather than in a box set. This was the last time Series 1 would be released in these formats, since a completely new one was just over the horizon.

Click here to see all seven of the Kawamoto sleeve designs.

Two years after the 25th anniversary blitz, Emotion struck again when Series 1 arrived on DVD in two forms: a deluxe box set (above) and individual rental-only discs (sleeve art shown below). The box set was a worthy successor to the 1990 “Perfect Collection” LD box and, in righteous DVD style, took the bonus features to a whole new level. With the Yamato copyright now administered by Leiji Matsumoto and Bandai Visual, all stops were pulled out to make this set into a real keepsake.

Arresting new art was commissioned from Hirotoshi Sano, already well-known for his unique visual take on another Bandai staple, Mobile Suit Gundam. The pilot film was included once again, but now fans could now also see some rare TV workprints of episodes 1, 2, and the originally-aired version of episode 22 before retakes were shot and cut into it after broadcast. The episode 1 workprint was of particular note since it was cut together with demo versions of the opening and closing themes by a vocalist who predated Isao Sasaki.

But the real treasure in this set was a 64-page booklet, which explored the making and marketing of Series 1 in unprecedented detail. (This website has benefited enormously from Bandai’s DVD booklets, for which we will be eternally grateful!) 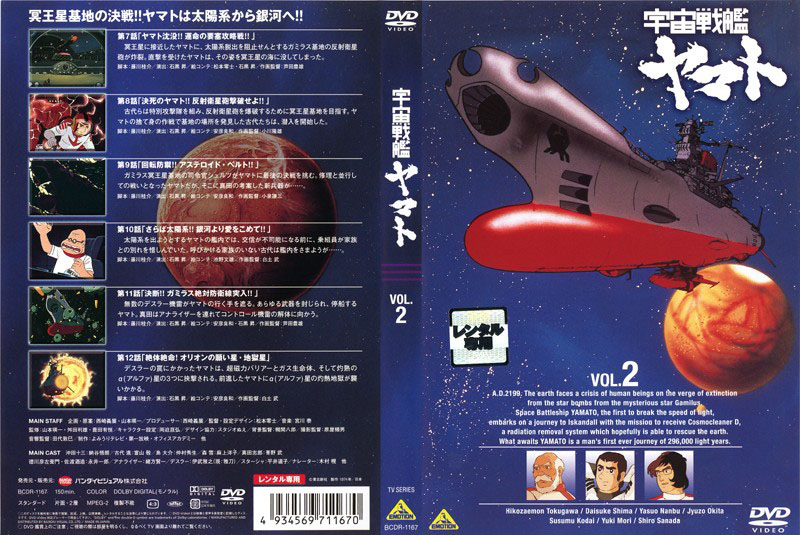 With the DVD ground broken, Emotion teamed up with Asian distributor PW to send Yamato into Region 3 countries (except China, which is designated Region 6). Bereft of bonus features, discs 1-4 contain episodes 1-20 and disc 5 contains episodes 21-26.

This, of course, is not the first time Series 1 was commercially available in other countries. Click here for a complete record of the Star Blazers version.

This release of Series 1 was in a form so different and revolutionary that it deserves an article of its own.

This remarkable set contiains 6 discs for the 26 episodes, plus a bonus disc. The entire series was remastered for unprecedented clarity and prodigious extra features. It was co-produced by Anime Commentator Ryusuke Hikawa, the original Yamato superfan who founded one of the first fan clubs in Japan and (by extension) founded anime fandom itself. 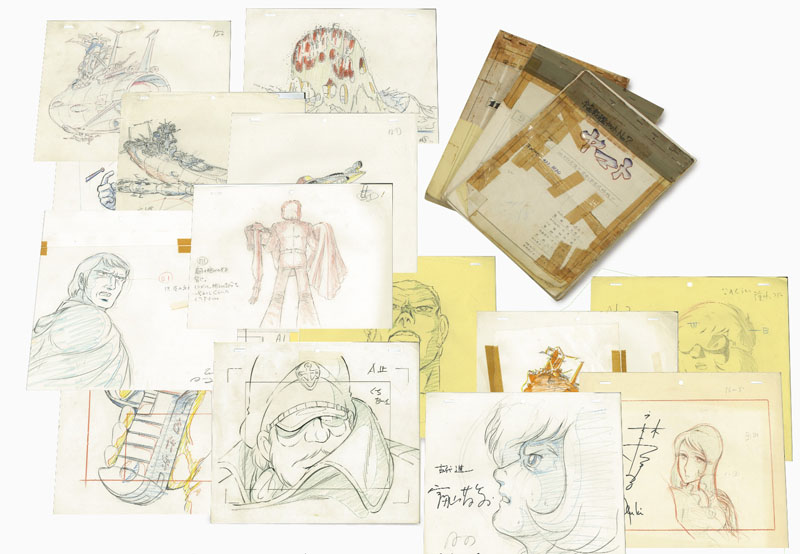 During the making of the series, Mr. Hikawa visited the anime studio many times and amassed an unparalleled collection of production artifacts, all of which were catalogued and organized to serve as the extra features; storyboards, scripts, designs, background paintings, layouts, cels, and more. The bonus disc contains the bulk of these, but some are also set up to run simultaneously with the episodes they belong to. There’s even a feature that puts a vintage TV frame around the 3×4 video picture to give you the experience of seeing it in 1974. Hikawa also participated in a few audio commentaries with Yamato 2199 director Yutaka Izubuchi.

As if the discs weren’t enough, there are two full-color booklets to deepen the experience. First is the “Standard Version File,” which covers the series episode by episode in 36 pages with liner notes and production art. The 64-page “Deluxe Version File” explores the making of Yamato with rare documents and artifacts, many never before published.

All the above can be found in the box set priced at 42,000 yen. A less expensive (36,750 yen) “Standard Version” was also released on the same day with less packaging, the first of the two books, and no bonus disc. It should be obvious which one the true fans go for. As of this writing, both versions can still be ordered from either Amazon.co.jp or CDJapan for international shipping. (CDJapan’s prices are a little higher, but their website is entirely in English.) Finally, shown above right is an exclusive Captain Okita ballpoint pen, a bonus item one could get if they ordered the set from the Yamato Crew website.

Special thanks to superfans Steve Harrison and Edward Hawkins for their invaluable detective work!